The pope, the devil and death

In Costa-Gavras' hard-hitting if heavy-handed "Amen," an SS officer with a conscience can't convince the Vatican to care about the fate of Europe's Jews. 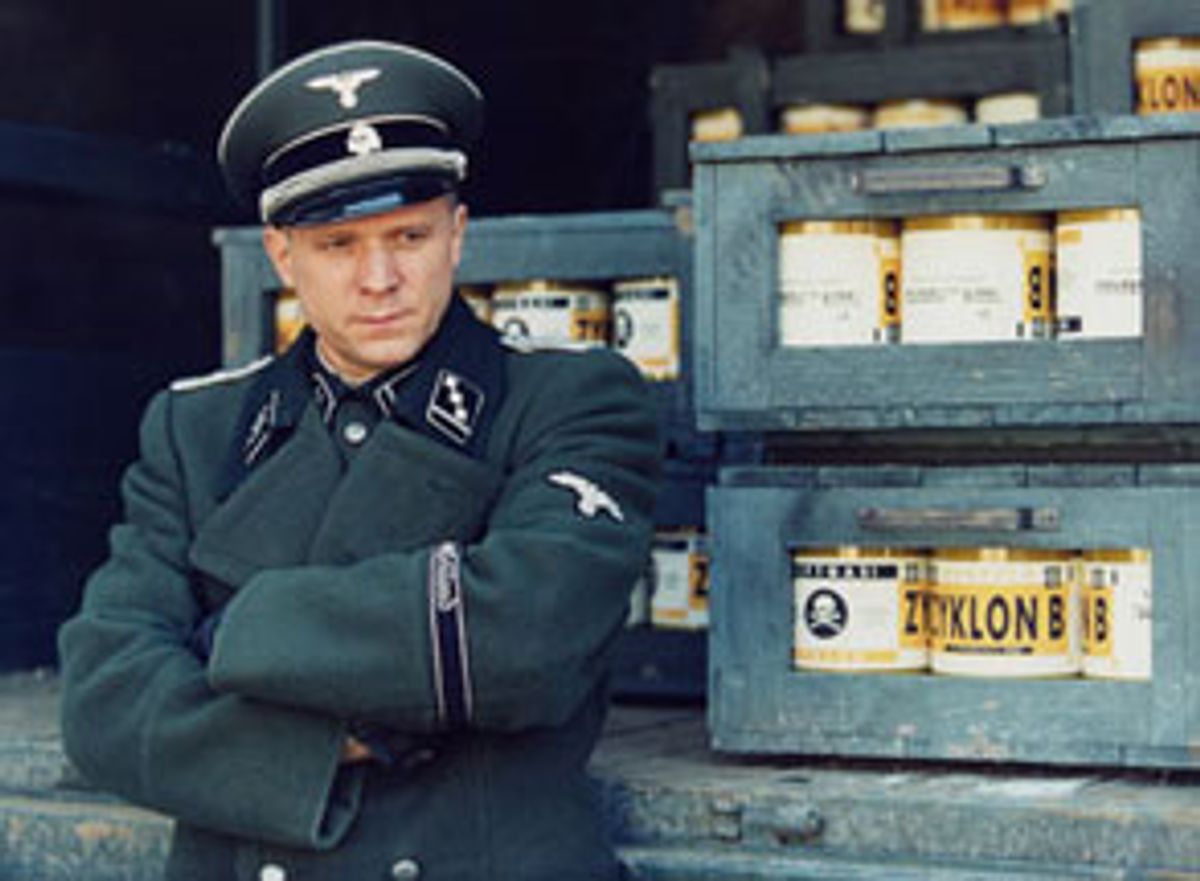 As a filmmaker, Costa-Gavras is astonishingly sensitive to complex moral and ethical issues, especially to the hypocrisy of unacknowledged complicity; as a dramatist, he knows how to lay out a scene so it grabs you where you live. All of that makes you wish "Amen" were better than it is. The movie is adapted from Rolf Hochhuth's highly controversial 1963 play "The Deputy," and it tells the story of the real-life SS officer Kurt Gerstein (played by Ulrich Tukur), a chemist who learns that the Zyklon B pellets he has been furnishing to the German army to treat soldiers' drinking water are being used instead to exterminate Jews in death camps.

After witnessing one of these mass murders firsthand, Gerstein tries desperately to enlist the aid of the clergy to stop the killings -- starting with the pastors in his own Protestant church and then, frustrated by their lackadaisical response, approaching the Vatican itself. The only person who is remotely willing to help him get his message across is a (fictional) young Jesuit named Riccardo (Mathieu Kassovitz), who learns the hard way that the Vatican has already heard "rumors" of the mass murders but has its own reasons for not even attempting to stop them.

Costa-Gavras (who co-wrote the script with J.C. Grumberg) makes no bones about it: He holds the Catholic Church accountable for failing to at least publicly decry the atrocities, if not actually stop them. And if Costa-Gavras is heavy-handed at times, he certainly is persuasive. He's not the first person to make the case that the church should be held accountable as a passive accomplice: John Cornwell covers similar territory in "Hitler's Pope: The Secret History of Pius XII."

But Costa-Gavras' case seems almost garishly passionate in a scene in which a group of papal bigwigs listen, half-attentively, to Riccardo's fervent plea that the church must take action. They're dining al fresco, and we see them against a gorgeous, wholly false-looking robin's-egg blue sky outside the Vatican; Riccardo has given them a map of the extermination camps, and they pass it around as they finish their meal, smacking loudly. Finally, one Vatican honcho leans back casually in his chair and says, his red beanie blinking against that blue sky like a beacon of Satan, "Time always proves the church right -- always."

Costa-Gavras' message is pointed, all right. But "Amen" is tricked up with so many points that there's barely any flow to it; even though Costa-Gavras has a vivid visual sense, and, when he puts his mind to it, a terrific understanding of how emotionally complex conflicts can really drive a narrative, he gets so hung up on proving his thesis that the movie falls apart. Characters are forced to deliver lines like "Some betrayals are the last resort of the just" and "Those trains are convoys that are leading us to Hell!" More than once he shows us a string of empty cattle cars, their doors open to reveal their ghostly hollowness, racing across the German countryside -- urged along by fervid string music, just in case the dramatic visual alone doesn't do it for us. Costa-Gavras' sincere fervor begins to feel like a bludgeon.

That's a shame, because "Amen" shows that Costa-Gavras does know how to put an effective dramatic spin on even the subtlest moral struggles, when he slows down the noisy slogan-pumping machine enough so he can actually hear himself think. He also has some fine actors to work with. Kassovitz's Riccardo has a fresh-scrubbed, wet-behind-the-ears innocence that makes his helplessness in the face of the Vatican power brokers seem like a hellish and undeserved punishment. And Tukur, as Gerstein, makes you believe even his hokiest, most leaden lines. He doesn't try to play Gerstein as a total innocent -- he does wear that SS uniform, after all.

But when a troupe of Gerstein's fellow Nazi officers bring him to an extermination chamber so he can witness this new use for Zyklon-B for himself, his face registers his disbelief in a way that seems profoundly human and humane. When his young son's arm pops up in a Nazi salute, as it does some six times through the course of the movie -- Costa-Gavras seems to want to make the point that some kids are just born to be Nazis -- Gerstein slaps it down impatiently, saying, "Don't do that." It's not so much an overt anti-Hitler statement as it is his way of fighting automatic, unquestioned responses.

Similarly, we feel Gerstein's mounting paranoia and isolation as he comes to realize that even people who would readily acknowledge that genocide is wrong -- namely, the leaders of his church, not to mention the Vatican -- will look the other way when it suits them to do so.

Costa-Gavras tells us why the church waffled when it came to denouncing Nazi Germany: Pope Pius XII hated Hitler, but hoped he would wipe out Stalin, who was viewed as the church's bigger enemy. And he also feared a German attack on the Vatican, which was geographically extremely vulnerable, and which, aside from being a holy place, also happened to be loaded with priceless treasures. (What's a few million Jews weighed against a Michelangelo?) But Costa-Gavras doesn't buy any of their excuses.

The filmmaker does have a tendency to hammer on the more melodramatic qualities of his story -- for instance, Riccardo becomes involved with Gerstein's cause when he picks up Gerstein's business card, which has been cast to the ground with an angry flutter by the Jesuit's boss, the cardinal. You can look at the scene and mutter to yourself, "I can't believe that would actually happen." Then again, who would believe that 6 million Jews could be murdered and only relatively small, scattered handfuls of people would attempt to do anything about it? Costa-Gavras' outlandish dramatic inventions are sometimes no less absurd than the facts themselves. No wonder he takes it as his mission to look back at history and shake his fist at it -- sometimes it's all you can do.