Organizers exaggerate turnout. Police play it down. Last Saturday's antiwar rallies raised the question: Isn't there a way to count crowds? There is, but nobody wants to use it. 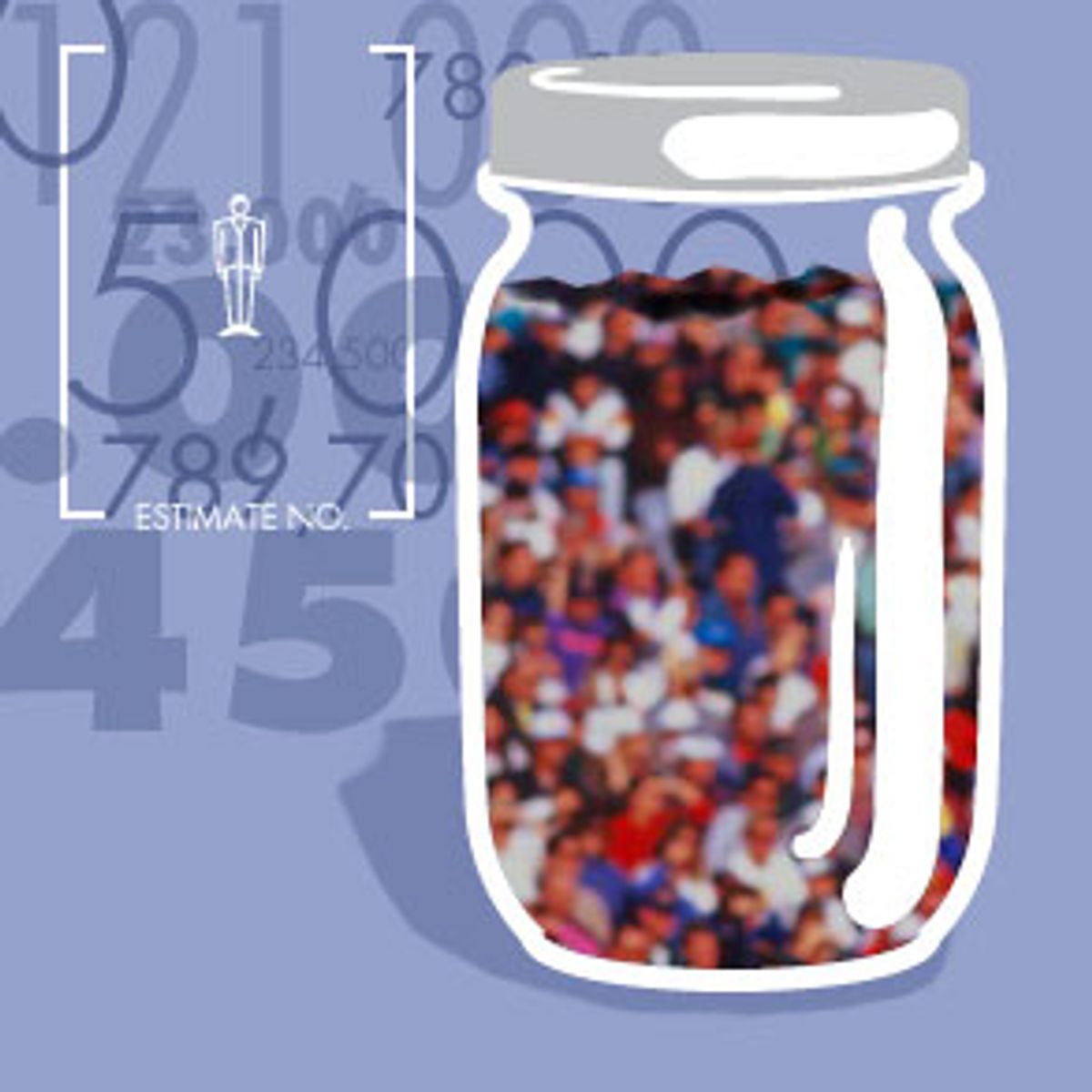 Crowd estimates for Saturday's antiwar demonstration in Washington are almost as contentious as the debate over the war itself. U.S. Capitol Police put the number at 30,000 to 50,000 and were promptly accused of low-balling the turnout by members of ANSWER, the march's organizers, who initially estimated that 200,000 people attended and then bumped it up to a half million. Most of the media went with a safe "tens of thousands," but a few took ANSWER at its word: The San Francisco Chronicle wrote that "as many as 500,000" people marched in D.C.

The politics of the numbers game is obvious. War supporters repeat the low figure to insist that the peace movement lacks a broad base, while antiwar activists use the high number to argue that America is rising up against an Iraq invasion. The same battle lines stretch back at least as far as the Vietnam War, and every time there's a sizable march in the nation's capital the same question arises: Isn't there some way to quantify the size of the crowds that throng to Washington in times of ferment?

In fact, there is. Clark McPhail, professor emeritus of sociology at the University of Illinois at Urbana-Champaign, is one of America's preeminent authorities on protest crowds. His award-winning 1991 book on crowd behavior, "The Myth of the Madding Crowd," is required reading in his field. When the Washington Post wanted to estimate the numbers at the massive Promise Keepers march in 1996, they hired him on the Park Police's recommendation. He attended last Saturday's antiwar demonstration, and according to him, there were 60,000 protesters. Tops.

That will sound low to a lot of people. Larry Holmes, a spokesman for ANSWER, called it "a little bit on the ridiculous side" and suggested McPhail's motivations are "political." But Joel Best, the University of Delaware sociology professor who wrote "Damned Lies and Statistics: Untangling Numbers From the Media, Politicians and Activists," calls McPhail "the expert on this stuff." And McPhail insists his estimation methodology has nothing to do with politics. He's been studying D.C. demonstrations since 1967, using a fairly simple mathematical formula -- square footage divided by occupation density -- to count everything from antiwar gatherings to the annual March for Life to the Million Man March to Promise Keepers ... and last week's D.C. rally.

"Believe me, I was not trying to lowball," he says. "I have been consistently surprised at the difference between eyeballing these things and what this square footage divided by occupation density equation yields."

ANSWER admits its 500,000 was no more than an eyeball estimate. "We arrived at it because it was easy to see from the stage that the numbers were at least twice as large as Oct. 26, and it was our serious estimate that we had a couple of hundred thousand then," Holmes says.

But McPhail says such eyeball estimates are usually wrong. The crowd-counting method he uses, he says, was devised by Berkeley journalism professor Herbert Jacobs in the 1960s during the Free Speech movement. Sproul Plaza, where the protests were held, was made of concrete poured in uniform sections. By measuring the sections, estimating the crowd density and counting how many sections were filled, Jacobs was able to come up with fairly reliable numbers. Farouk El-Baz, director of the Center for Remote Sensing at Boston University, says that the methodology is well known and well respected by scientists.

The Park Police used to use it to make protest-crowd estimates, but the issue became so contentious they got out of the crowd-estimate business entirely, after Louis Farrakhan threatened to sue when the agency said there were only 400,000 people at his 1995 Million Man March. To avoid such threats, Congress banned the Park Police from counting crowds at future demonstrations.

Independent researchers can still use the Park Police's methods, though, and that's what Clark McPhail did on Saturday. The counting formula divides the mall into eight panels and measures the square footage of each. For really huge protests, aerial photographs are necessary to determine how much space is occupied, but Saturday's rally was small enough that McPhail and another professor, John McCarthy of Pennsylvania State, could easily walk through the gathering many times, noting its borders and its density.

A crowd of 500,000, he says, would have filled all eight panels, stretching from the Capitol Building to the Lincoln Memorial, or from Third Street to 14th Street. Saturday's protest, he says, filled only one and a quarter panel, and only a fraction of that was densely packed.

The first panel is bordered by Madison Drive on the north, Jefferson Drive on the south, Third Street on the east, and Fourth Street on the west. McPhail has measured it himself with a measuring wheel and says it's 365,000 square feet, including the tree-lined areas in the north and south, which were almost empty. The second panel, from Fourth Street to Fifth Street, is the same size. It was only about a quarter full.

Once he's established square footage, McPhail establishes crowd density. In a very crowded space -- say, the subway at rush hour or a packed elevator -- people usually occupy 2.5 square feet of space. McPhail used that number to count people crowded around the stage toward the east end of the panel. That crowd stretched back about 150 feet. Beyond that, the throng got looser -- people were still close together, but it was easy to move through them. People in that kind of crowd take up about 5 square feet each, McPhail says. Toward the back of the first panel and on the second panel, people were quite spread out, standing in small clumps or milling about various literature tables. There, McPhail says, people occupied about 10 square feet of space.

From there, it's just a matter of division: 26,653 people in the most crowded section, 8,784 in the moderately crowded section, and the same number spread out in the back of the first panel and front of the second. That makes for a total of 44,221.

McPhail took the measurements leading to that conclusion at 1 p.m., two hours after the rally began. While he was measuring, a few last busloads of people were still coming in -- as much as 10 percent of the rally. He also said it was possible that another 10 percent joined the rally once the march began. So to be on the safe side, he added 20 percent to his 1 p.m. total, which yields 53,065. "Again, I think I'm being generous here," he says.

According to El-Baz, who has worked with the Park Service, aerial photographs would have given a more accurate estimate. Still, he says, McPhail's method is "the best that can be done under the circumstances without having an imaging system. That certainly is the right way to do it, though it remains a guesstimate."

The number even suggests that, contrary to previous reports, Saturday's demonstration in San Francisco was larger than the one in D.C. There, police originally estimated 55,000, based on the number of people in Civic Center. After viewing aerial photographs of the crowds on the streets leading into the plaza, the police upped their estimate to between 50,000 and 100,000, and then said it could have been as large as 150,000.

That could mean that, unsurprisingly, the San Francisco Bay Area is more liberal than the East Coast, or that the warm weather was more inviting than the frigid cold in D.C. There's no way to know, since no one was using McPhail's methodology there.

"I've been looking at demonstrations in Washington since 1967," McPhail says. "I have a pretty good sense of how long it takes them to form. At the point that we made the count it was pretty close to the upper limits, but it could have been that people came on later, so that's the way I made these estimations. I'm giving the organizers the benefit of the doubt."

He insists he's not trying to minimize what the protesters achieved. In fact, he says, he thinks they do themselves a disservice by exaggerating. "While hyperbole is to be expected from organizers -- it has always been higher than the estimates of the police -- this can work to their disadvantage," he writes in an e-mail. "For whatever it is worth, the composition of Saturday's rally and march -- a lot of middle-aged and affluent folks -- was far more interesting and impressive than the tens of thousands of people who were present (and that is a not a number to be readily dismissed)."

Numbers, then, can suggest only so much. After all, by McPhail's calculations there were 450,000 people at the Million Man March in 1995. That's less than organizers expected or advertised, but still, by any measure, it was an enormous crowd. Yet that group has not become a significant political force. Meanwhile, he says, in the antiwar demonstrations of the '60s and early '70s, the protests became effective once Middle America started turning out. At that point, the size of the rallies mattered less than who attended. Once the mainstream turned against the war, it had to end.

"In the Vietnam era, it was when middle-aged folks and middle-class folks, doctors and lawyers began coming out and participating that public opinion began to turn," he says. "I don't know if this will be a harbinger of a similar kind of change or not, but I was really struck on Saturday by the visible presence of a larger proportion of older people. I think it was impressive."