The Silver and Black will torture and keelhaul their enemies!

And that'll just be in the stands. The Raiders will win on the field, too. 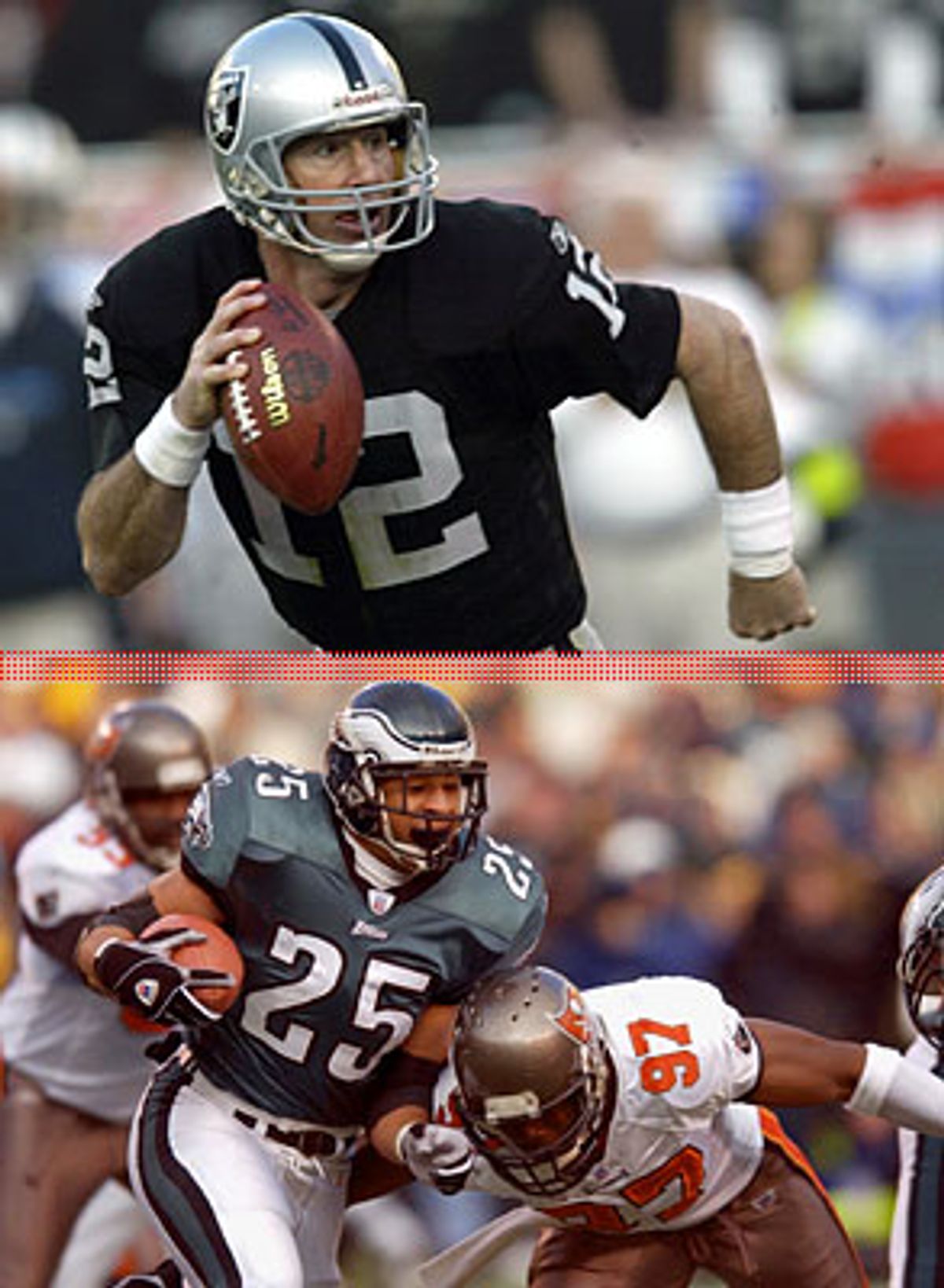 Gertrude Stein had it all wrong. The problem with Oakland is that when you get there, it's there. Oakland is certifiably the worst spot on earth, with the possible exception of much of Philadelphia, and we can only thank God that the Tampa Bay Bucs prevented the bringing together of the two worst sets of fans in American sports.

Now, when I say "worst," it's understood I mean that in the best possible sense. My father's family is from Philadelphia, and I'm unnaturally fond of the city, even the south side. My friend the novelist Barry Gifford once took me on a guided tour of Oakland, and I fell in love with the Mexican restaurants and used-record stores. It's my kind of town. The rest of the world doesn't find much of value in either city; the rest of the world's idea of paradise on earth is ... well, closer to something like Tampa Bay.

If it's possible for the fans of either team to have an effect on the outcome of a game, it is going to be the Raiders' fans, who will show up for pro football's biggest event looking like the biker gang from "The Road Warrior." Beyond that, there would appear to be little obvious edge for either team in what should be one of the most evenly played Super Bowls in the game's history.

Everybody wants to call Tampa Bay coach Jon Gruden a genius. Myself, I think you have to wait till a guy has at least two gaudy rings on his hand before he merits the title. Meanwhile I'll concede that Gruden looks like a genius, because he has taken some mediocre talent and managed to con the world into thinking that it's great talent. The con job I'm referring to is the one he's done with the Tampa Bay offense. I can't recall a team that ever made it to the Super Bowl with a worse running attack than the Buccaneers have had this past season. (For their two playoff games, they have tallied exactly 70 yards rushing and averaged a ridiculously bad 2.4 yards per try.)

This means that they face a lot of second-and-long and third-and-long plays in which the defense would normally ignore the run and go straight at the Tampa Bay quarterback, Brad Johnson. The 49ers were incapable of doing this, and for some reason, the Philadelphia Eagles simply didn't, sitting back in an unimaginative four-man front, blitzing on just one out of every five plays, mostly sitting back and reacting to what Tampa Bay did.

The Raiders do not have as good a defense as the Eagles, who sacked opposing quarterbacks 56 times last year. (The Raiders sacked the QB 43 times, same as the Bucs.) But they will come at Brad Johnson with whatever they have, and Johnson, when rushed hard, will cease to look like the second coming of Joe Montana.

The other side of the ball, though, presents the match that everyone has been waiting for. You almost never get to see the league's best offense matched with the league's best defense, and never at all in the Super Bowl. Oakland's Rich Gannon practically is the second coming of Joe Montana and will probably hope for Tampa Bay blitzes in order to exploit single-coverage situations. The Raiders' offensive line may be the first one the Bucs have faced this season capable of handling them physically, and Oakland will be the first team Tampa Bay has played that can make the big play to any of five receivers -- which is, when you boil it down, what the so-called West Coast offense is really all about.

The Raiders won't win this game just because of running back Charlie Garner, but don't be shocked if he turns out to be one who makes the biggest play. Garner averaged 5.3 yards per rush this season, and though he won't have an easy time finding a hole in the Bucs' defense, when he gets just a step into the open field he can do more damage than any other back on either team. Just as relevant is that he gets over 10 yards per pass reception.

The Raiders have the tools on defense to shut down the Bucs on the quick-drop-and-throw sets that Johnson has been living on for the last few games. Johnson has really yet to prove that he can play any other kind of game, and the Raiders will make him prove he can. On the other hand, I don't think that even the best defense in the league can do much about Gannon. When his initial receiver isn't open, Gannon has a knack for "looking" the safeties off the play and hitting the secondary man, and lately the secondary man has been wideout Jerry Porter, probably the best game-breaker on either side. As for possession receivers, the Raiders may have the two best in NFL history in Jerry Rice and Tim Brown.

It goes without saying that both teams are going to have a hard time playing catch-up. But of the two, the Raiders are far better equipped to come from behind. For one thing, if they make a mistake early, it's obvious that they will come right back at the Tampa Bay defense and not go into a shell and play conservative ball, as most other Buc opponents have done. If the Raiders score first, they will be able to pick and choose their shots on offense and go after Brad Johnson while ignoring the Tampa Bay running game on defense. (My guess is, they will pretty much ignore the Tampa Bay running game anyway.)

Of the two teams, the Raiders are the one whose aggressive philosophy is most likely to result in a first score. And if it comes down to one team needing inspiration from its fans deep in the fourth quarter, who do you like?