A new book explores the hard lot of America's domestic workers -- and suggests that it's ethically wrong not to clean your own house. 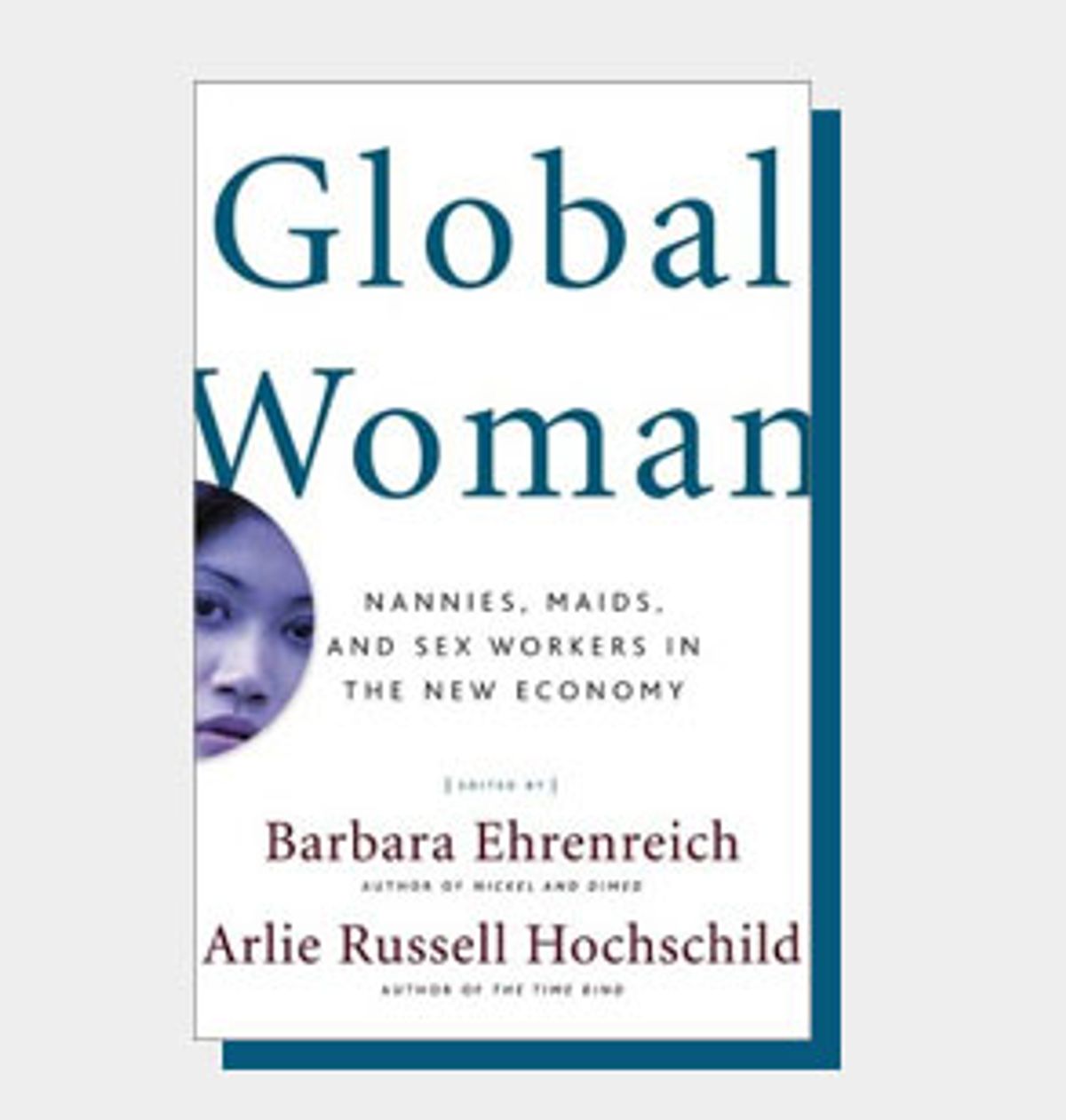 Barbara Ehrenreich and Arlie Russell Hochschild are America's preeminent writers on the politics of women's work. "The Second Shift," Hochschild's 1989 book about couples' power struggles over housework, both coined a phrase and ignited a debate over men's failure to share domestic burdens with their working wives. She furthered that discussion with her 1997 book "The Time Bind," which explored the reasons people have come to spend more time at work and less at home. More recently, Ehrenreich's 2001 book "Nickel and Dimed" did an enormous amount to illuminate the invisible but Sisyphean struggles of ordinary women trying to make ends meet in low-wage, dead-end jobs. In the best muckraking tradition, she gave up her comfy writer's life for a few months to work as a waitress, a maid and a Wal-Mart clerk, surviving exclusively on her meager pay, which meant at one point working two jobs and living in a crack-infested trailer park.

So it's hard to think of two journalists better suited to editing a book like their new "Global Woman: Nannies, Maids, and Sex Workers in the New Economy." This collection of essays details the "care drain" from the Third World, as women leave their own homes and families in poor countries to serve those of first-world, upwardly mobile professionals. The feminization of the migrant work force is an enormously important, underreported subject; as Hochschild and Ehrenreich write, "Throughout the '90s women outnumbered men among migrants to the United States, Canada, Sweden, the United Kingdom, Argentina and Israel." Female migrants, they report, "overwhelmingly take up work as maids or domestics." The causes and implications of this are complex and earth-spanning, grist for a fascinating study of how globalization changes even those most intimate of institutions, the home and family.

"Global Woman," unfortunately, is not that study. There are some fascinating insights, illuminating anecdotes and harrowing revelations in this collection, but they're often suffocated by self-righteousness, anger, opaque academic jargon and muddled anti-capitalism. Some of the writing reaches levels of impenetrability worthy of the postmodern journal Social Text -- elaborating on the routes migrant women take to rich countries, Saskia Sassen tells us, "These circuits make up, as it were, counter-geographies of globalization. They are deeply imbricated with some of globalization's major constitutive dynamics: the formation of global markets, the intensifying of transnational and translocal networks, and the development of communication technologies that easily escape conventional surveillance." Oh.

The strong sections of this wildly uneven book offer terrifying glimpses of the abuse of trafficked women and sensitive appraisals of the complicated relationships that emerge among caretakers and the charges they're paid, essentially, to love. Hochschild gives a nuanced account of Filipina women who leave their own families to care for others -- sometimes even hiring their own nannies to raise their children in their absence. She makes the crucial point, echoed by Rhacel Salazar Parrenas, that Third World children often pay the price for women's migration, losing their mothers so that first-world children can have mothers, fathers and nannies.

Too often, though, the writers direct their rage not at the system that drives Third World women out of their own homes and into those of others across the world, but at the first-world women who hire them. It becomes a simple story of exploited victim and exploiting bitch, ignoring both the fact that many migrants move abroad willingly, eager for a chance at economic advancement, and the economic pressures that lead first-world women to work long hours and hire household help. (Interestingly, Denise Brennan's essay about Dominican prostitutes and sex tourism hews to a contradictory line, writing that those who cast prostitutes as victims "deny that poor women are capable of making their own labor choices.")

Since many of the writers in "Global Woman" are attacking the whole institution of domestic service, they don't bother to discuss policy changes that could really improve life for women who do choose such work (and it often is a choice, even if it's one constrained by circumstance).

The book's problem lies, in many ways, with Ehrenreich herself, who too often lets her valiant solidarity with working-class women congeal into bitter contempt for their middle-class sisters. Along with some of the other essayists in "Global Woman," she strongly suggests that the mere act of hiring a cleaning woman -- as opposed to mistreating or underpaying her -- is in itself immoral.

In "Maid to Order," an essay that originally appeared in Harper's magazine, Ehrenreich speaks about "moral losses ... as Americans increase their reliance on paid household help." Insisting that hiring such help is qualitatively and ethically different from other market transactions, she writes:

"Someone who has no qualms about purchasing rugs woven by child-slaves in India, or coffee picked by ruined peasants in Guatemala, might still hesitate to tell dinner guests that, surprisingly enough, his or her lovely home doubles as a sweatshop during the day. You can eschew the chain cleaning services, of course, hire an independent cleaner at a generous hourly wage, and even encourage, at least in spirit, the unionization of the housecleaning industry -- and of course you should do all these things if you are an employer of household help. But none of this will change the fact that someone is working in your home at a job she would almost certainly never have chosen for herself."

Essentially, Ehrenreich is saying that it's morally wrong to hire someone to do a job she finds unfulfilling, even if you pay her decently. This is a funny argument for several reasons. First of all, beneath her apparent concern for working-class women lurks a weirdly detached elitism -- I doubt most women seeking cleaning work would appreciate Ehrenreich telling potential employers not to hire them. Similarly, in her essay "Just Another Job? The Commodification of Domestic Labor," Bridget Anderson sneers at household employers who try to treat their workers compassionately, writing, "Through kindness, pity and charity, the employer asserts her power." Given the horrific abuse recounted in some of the book's more powerful chapters, how many household workers would really appreciate academics who try to make their bosses feel guilty about their "kindness, pity and charity"?

More irritating still, the book's condemnation of people who hire workers to do messy or tedious jobs doesn't seem to apply to those who take taxis or employ exterminators or plumbers or garbage collectors. In other words, it applies only to professional women (while there are surely plenty of bachelors and single fathers who hire cleaners, they don't appear in this book). Anderson writes, "Simply by hiring a domestic worker, the employer lowers the status of the work that employee does. After all, the employer has better or more lucrative things to do with her time."

That latter sentence is true of all kinds of work, but the writers seem to expect us to share their special disgust for women who want to escape the sisterhood of household drudgery. Hiring household help, unlike paying for other kinds of help, breeds "callousness and solipsism," Ehrenreich tells us. To make this far from self-evident point, she relies on bizarre analogies. "Almost everyone complains about violent video games, but paid housecleaning has the same consequence-abolishing effect: you blast the villain into a mist of blood droplets and move right along; you drop the socks knowing they will eventually levitate, laundered and folded, back to their normal dwelling place."

Concern over the morality of failing to launder one's own socks seems especially absurd given the very real outrages recounted in the book's more penetrating chapters. In "America's Dirty Work: Migrant Maids and Modern-Day Slavery," Joy Zarembka recounts horrific stories of women trafficked to the United States or brought in the retinues of foreign diplomats residing in Washington, D.C. Once here, the women are deprived of their passports and kept as virtual slaves.

"Abuse and exploitation follow such uncannily predictable patterns that many in the social service world almost wonder if there is an 'Abusers Manual' being circulated like samizdat," Zarembka writes. "Many women find themselves working nearly around the clock, seven days a week. The exploitative employer usually tells the worker that she may not leave the house unaccompanied, use the telephone, make friends or even converse with others. The worker is often denied health insurance and social security, even if these benefits have been deducted from her pay. Some domestic workers are subjected to physical battery and sexual assault; others who have serious health conditions are denied medical treatment, which can result in long-term illness. Some domestic workers are given as gifts to the mistresses of diplomats, or traded and loaned out to American families who further exploit them." She tells of a Ghanaian woman whose American boss referred to her only as "the Creature," and a Filipina who was forced to wear a dog collar and sleep outside.

Zarembka's piece isn't just valuable for the evil it exposes. It lays out real solutions that would ameliorate many of the miseries enumerated by her and by other writers. One answer to the abuse of domestics lies in the grossly disparate ways the government treats European au pairs and other foreign household workers. Au pairs, who come on J-1 visas, are given orientations and introduced to other nannies in their regions who form a support network. Along with their employers, they must check in with a counselor once a month to report problems or resolve disputes. Women from developing countries, meanwhile, migrate on A-3, B-1 or G-5 visas, which, Zarembka writes, "do not come remotely close to offering the protections or the comforts J-1 visas provide white, European women." She is clearly right when she says, "Simply put, women of color in the domestic worker program deserve the same safety net and rigorous oversight granted to white women in the nanny program."

Zarembka also stresses the importance of creating shelters for abused domestic workers, reporting that, incredibly, many domestic violence shelters won't accept these women since their beatings aren't inflicted by partners. Cheeringly, she writes that domestic workers are organizing, pointing out the formation of workplace cooperatives that take to the streets to tell domestic workers about their rights and, if necessary, direct them toward bilingual attorneys. One of these groups has even formed a cleaning cooperative "whose goal is to provide dignified day jobs and equitable working conditions," she says.

The demand that domestic workers be treated with dignity and paid fairly isn't as radical as decrying a system that lets some women be lawyers while others are maids, but it's a demand that's far more likely to improve poor women's lives. Not hiring domestic help out of some lofty notion of the virtue of doing one's own chores might make certain commentators feel morally superior, but it does nothing at all for the great many people who'd rather have unpleasant work than no work at all.