Dr. Tatiana mostly offers advice on banana slug penis problems and sponge louse jealousy, but we can all gain from her sexual wisdom. 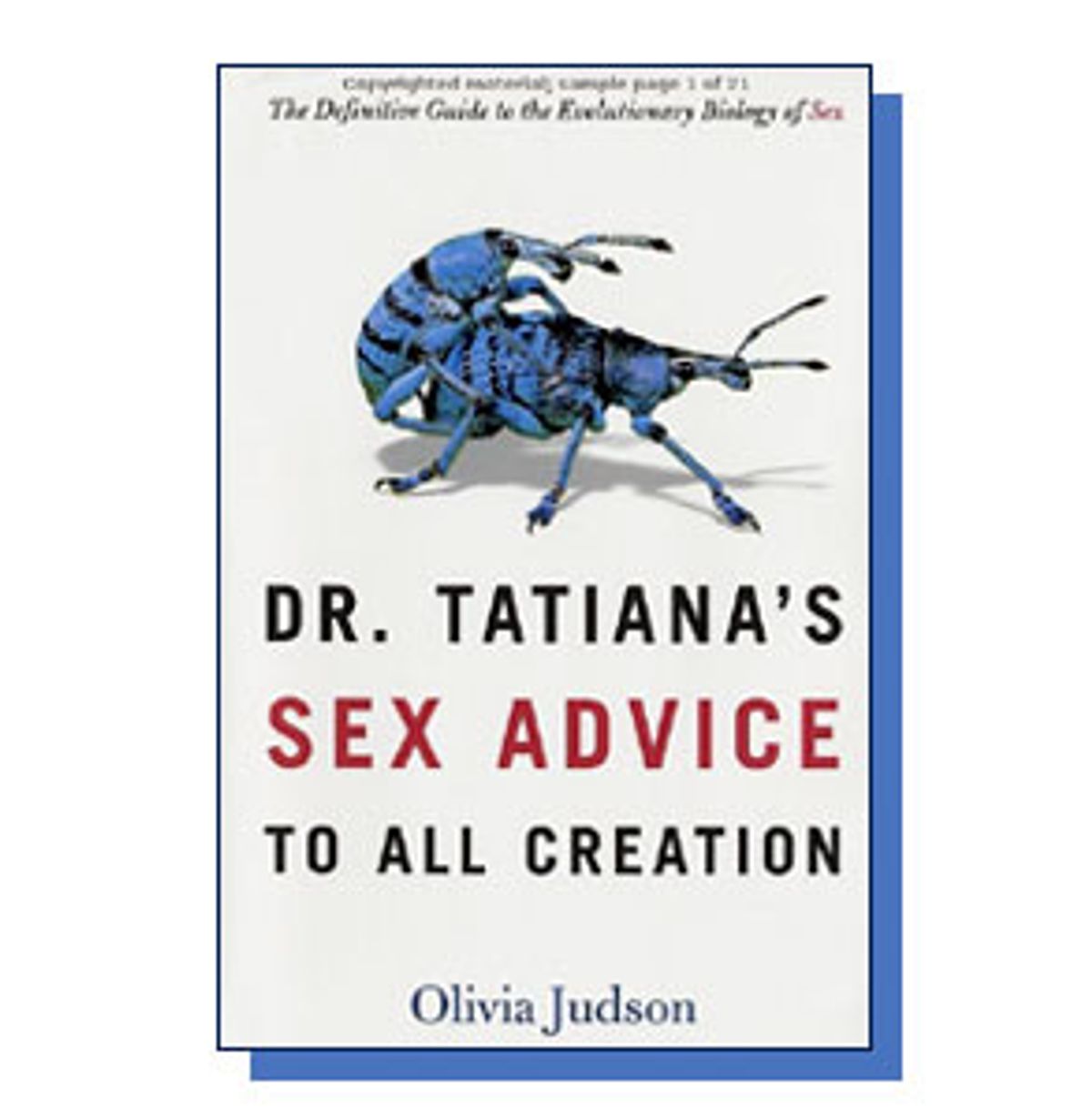 They're fighting ever more fiercely for the chance to advise us on our sex lives. Dr. Laura, Dr. Ruth, Dr. Phil, Dr. Oprah, sensitive Dr. Masoch and hard-liner Dr. Sade (not to mention the tireless Dr. Spam) -- they seem to be everywhere in recent months. They're on television, the radio, the covers of women's and men's magazines. Surely the need for sexual advice and the desire to learn what sexual advice others require are not endless? Who will be left when the market shakes out? I believe it may turn out to be the sexual advisor who combines two popular genres into one blockbuster feature. Hint: Animal Planet.

In the chatty, opinionated guise of Dr. Tatiana, Olivia Judson brilliantly combines the ever-popular genre of the advice column with that of Sick Nature Facts. The combination is strikingly successful. As Dear Abby never has, Dr. Tatiana confronts the etiquette issues involved in depraved cannibal incest, for example, and uses them to illuminate biological insights into the nature of life on earth.

A typical section of Judson's book, "Dr. Tatiana's Sex Advice to All Creation," will begin with a letter from a troubled or inquiring life-form and will go on to explore issues raised by that creature's situation. She examines an instructive variety of dilemmas. I am particularly fond of a letter from "Hoodwinked in the Gulf of California," one of life's winners who nevertheless feels as if he's slowly going mad: "I'm a sponge louse, and I recently won a battle for a sponge cavity that is home to a large harem of beautiful girls. But I'm starting to suspect that some of the girls are not what they seem: several look like men dressed as women. Am I being paranoid?"

Dr. Tatiana is able to reassure Anxious that his situation is perfectly normal, which is in fact her response to many worried beings. Her explanations of various bizarre evolutionary successes are clear and compact. My only complaint would be that I want to read even more letters from correspondents like "Neglected Househusband in Tamil Nadu" (a bronze-winged jacana) or "Group Sexists in Santa Catalina" (sea hares).

Dr. Tatiana often takes quite a folksy tone. (Surely this is fair to say when she addresses readers as "Folks") Although I have read vast numbers of books on biology for popular audiences, I believe this is the first time I have encountered the term "rumpy-pumpy." (In reference to the love life of Australian seaweed flies, as you might have guessed.)

Many are the shocking and tangled relationships revealed in Dr. Tatiana's answers to her pen pals. No doubt you knew about and had adjusted to the hermaphroditism of banana slugs, but perhaps you were not aware that during sex the "gigantic and complex" penis of a slug may get stuck, whereupon one or the other of them has to gnaw it off. This ends that slug's chances of playing the male role, but happily it remains in touch with its feminine side.

Then there are the button beetles (Coccotrypes dactyliperda), of whom you read so little in the Lifestyle section of the newspaper. Who has not heard the scuttlebutt to the effect that button beetles can and often do mate with their own brothers or sisters when they've only just hatched? Dr. Tatiana describes the even more scandalous behavior of a female button beetle who goes out in the world without taking this precaution. "On arriving at a new home, [she]... digs out a grotto and then lays a small clutch of unfertilized eggs. These develop into males. She mates with the first to hatch and then eats him and his brothers before laying a large brood of daughters -- and perhaps one or two more sons for her girls to mate with." Worse still, these amoral creatures are known to infest buttons on clothing.

Naturally, Dr. Tatiana does not shy away from counseling those in more conventional relationships. She is brisk in her reply to a young California mouse who has a crush on her neighbor's husband, advising her that this species is so profoundly monogamous that once a male has a mate "he won't even cheat on her even if he finds himself locked up with a virgin in heat." Her assertions are carefully referenced, so you can look this up if you like. The footnotes answer questions such as: Who thinks up these experiments? Are these people scientists or screenwriters?

Or consider the Djungarian hamster, a species in which the male "is such an attentive father that he plays the midwife for the birth of his pups (the only male mammal so far known to do this as a matter of routine), helping them emerge from the birth canal, opening their airways so they can breathe, and licking them clean. For good measure, he eats the placenta." Yes, but does he videotape the delivery? Perhaps not, as this vision of domestic felicity blurs when Dr. Tatiana casually mentions that Djungarian hamsters breed so busily that they can produce "eighteen litters of between one and nine pups" in a year. That's up to 162 baby hamsters, each needing to be suckled, washed and kept in line. No wonder the male performs all the midwifely tasks -- the female is far too exhausted. In fact, around the hundredth pup she is probably asking herself how bad it would be if they couldn't breathe.

Like so many advice columnists, Dr. Tatiana is perfectly liable to respond to some heartfelt pleas for advice with information and commentary, perhaps even a warning, but with no actual advice. At least she spares us numbered lists of fire safety tips.

When it comes to scorpion flies, a species known to steal insects from spider webs, she is on surer ground, with advice for both sexes. "Tip: If you're a boy scorpionfly, you'll have a big bulbous penis. If you're in a spider's larder and the owner tries to stop you, whack her with your member and she'll back off. Girls, if you ever find yourselves in the same predicament, your best bet is to head butt the poor spider."

When all a correspondent wants is information, as when "Spooked in Gabon," a golden potto, asks, "Please, Dr. Tatiana, why is his penis covered with enormous spines?" her answers are utterly satisfying, although some reader may be troubled by her reference to the relative dullness of the human penis, "notable only for its girth." Comparing the anatomy of the male golden potto to that of the male damselfly, the male ghost spider crab, the male red-billed buffalo weaver, and so forth, she ends by suggesting that the spines may serve to stimulate the female golden potto, or to get rid of the sperm of other male golden pottos. True, she also notes that comparative studies indicate that such genital extras suggest that "female golden pottos sometimes sleep around" -- if she were writing for a newspaper, I bet the editors would take that out.

Dr. Tatiana also issues the occasional "wake up and smell the coffee" letter. In her reply to "Bewildered Down Under," a female splendid fairy wren who can't understand why her mate keeps going to the doctor to have his sperm count checked when it checks in at 8 billion sperm at a time, she warns that "His 'appointments' are a thin disguise for philandering. Splendid fairy wrens are notorious for their extramarital adventures," goes on to link this to his high sperm count, and concludes by casting aspersions on Bewildered's own marital fidelity.

While Dr. Tatiana spares us numbered lists of what to keep in the glove compartment in case of emergency, in her section on crimes of passion she does provide a guide for female self-defense: "1. Don't attract attention. Hide or be otherwise conspicuous. 2. Don't leave home alone. Hire an escort or, failing that, stick with other females. 3. Do avoid groups of idle males. If they congregate at a place you must go to, try to time your visit to coincide with the arrival of other females. 4. Do carry weapons. Males tend to be servile if females are well armed.

I am certain I have read items 1-3 in Ann Landers, although not 4. She seems to have forgotten "Do carry your keys in your hand so you don't have to fumble through your purse for them in a darkened parking lot" and "Don't list your full name in the telephone book." Tatiana's tip No. 4 is one that is generally omitted in advice to our species, however.

There is a brief discussion of child care, which is appropriate, since, after all, the production of offspring is what has made the practice of sex such a winning strategy. Dr. Tatiana is fond of the hermaphroditic African leech, which carries its young in a pouch, like a kangaroo.

But I sorrow to note that Dr. Tatiana's focus on reproduction has something regrettable in common with mainstream sex education in the United States today: She has nothing to say about birth control. Does she believe with many religious fundamentalists that birth control is "unnatural"? Surely it cannot be that what divides humanity from the rest of creation is not consciousness, nor laughter, nor tool use, nor tool manufacture, but our use of tools in family planning?

Undoubtedly blazing the trail for the inclusive future of sex advice, Judson closes with a transcript from "Under the Microscope: The Deviant Lifestyle Show!" with host Dr. Tatiana (glamorous in a scarlet suit) interviewing Miss Philodina roseola, the bdelloid rotifer, about whether it is true that bdelloid rotifers have reproduced only by cloning -- no sex -- for the last 85 million years. Irate audience members accuse the guest of lying, try to drown out the proceedings with political chanting, or give touching testimony and vivid demonstrations from their own lives as to the wonders of sexual reproduction. In a postscript Dr. Tatiana notes that the more she learns about the sexual practices and predilections of others, the more tolerant and, in some cases, the more envious she becomes. "I now think that many more things are normal," she says, and wishes everyone "lots of great sex" unless they chance to be bdelloid rotifers.