He lost his Mojo

Joe Millionaire says goodbye to the show's biggest psycho -- and only true romantic. 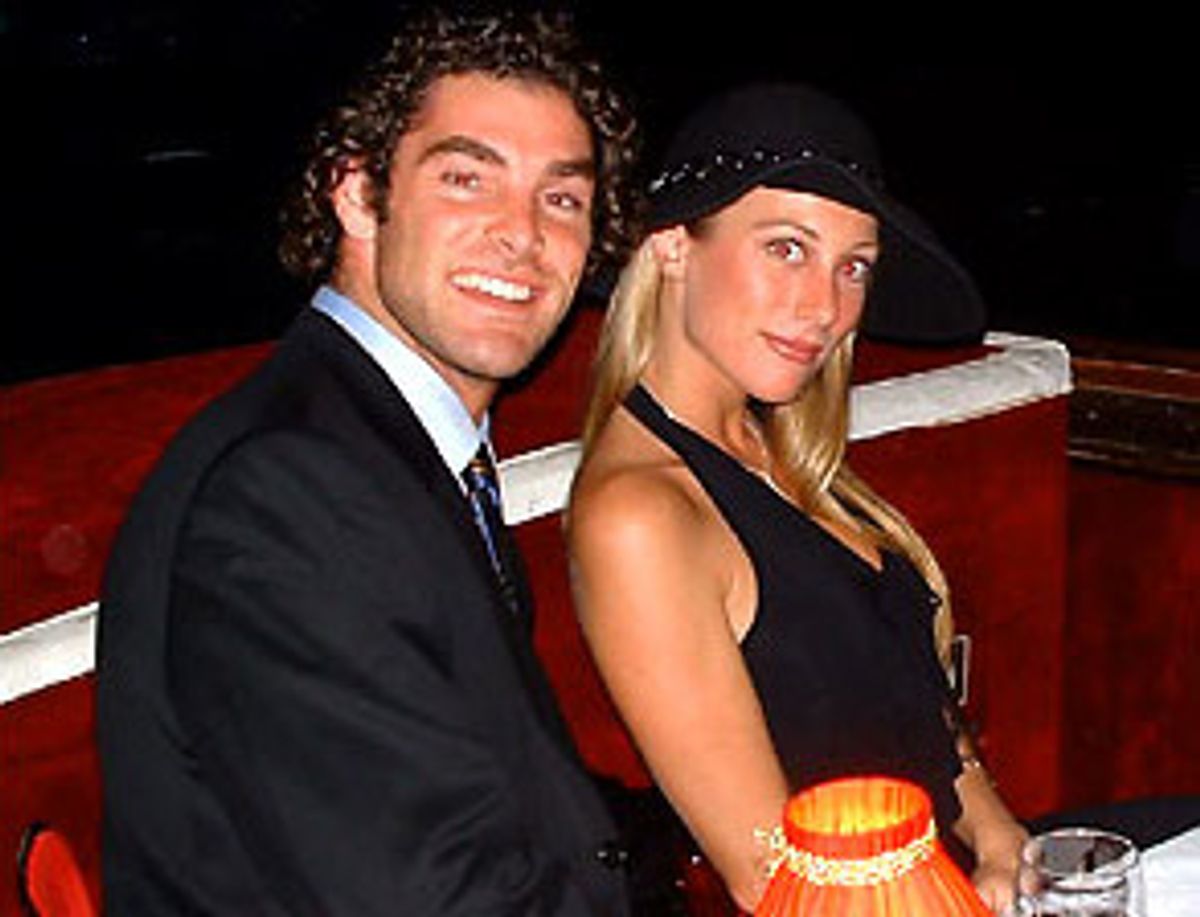 So now it's down to three. Evan Marriott, the working-class hero of Fox's hit reality series "Joe Millionaire," has kicked another princess out of the castle, saying goodbye to bimbo extraordinaire Melissa Jo, known to friends and enemies alike as Mojo.

Ahh, Mojo, she of the tan and muscled stomach, the tasteless black hats, the suspicious claim that she is just 25 years old. Mojo, who will be burned in our memory, at least for the next day or two, licking her lips every 15 seconds, like a lizard in heat.

Mojo: Vulgar, cocky, aggressive and, ultimately, born to lose. I miss her already.

Let's set aside for a moment the cerebral challenges in considering reality shows in general, and let go of the somewhat discomfiting revelation that our working-class hero grew up in a gated community in Virgina. Let's suspend our knowledge of the fact that he attended, and -- like the true aristocrat he is pretending to be pretending to be -- was eventually thrown out of, a private boarding school.

Let's not fall prey to cynical observations about directed moments. (Well, maybe just for a minute. Can it really be a coincidence that Sarah, Melissa and Mojo all swooped in on Evan and Zora, just as they were planning to share a hot tub together? And if Evan and Sarah were so intent on ditching the cameramen, why didn't they just take off their mikes once they were out of eyeshot? And since the entire plot is based on the idea that all this estrogen is focused like a hormonal laser on just one object, what about all the beefy cameramen, producers, caterers, lighting guys, sound men, prop masters who must have been hanging around? What if, egads, all this stuff is scripted?)

And, good Lord, let us not be grim, humorless feminists who might condemn watching women scratch each other's metaphorical eyes out over sex and money, the two defining values of our paternalistic society, while the big, bland and admittedly bodacious purveyor of sex and money, who turns out to be a big, bland bodacious liar, emerges with his reputation intact and a VIP pass at the Super Bowl. Let us reject the guilt that might come from admitting to ourselves that this handsome doofus is famous for spending six weeks on camera lying to well-meaning women, or that, when his lucky girl discovers she's been lied to, she will have to prove her self-worth by loving him anyway, even though he is a duplicitous creep. Even after discovering that she's just been sucker-punched in front of millions of her fellow Americans. That would be so Ms. Magazine of us, so very "Free to Be You and Me." So not Cinderella.

No. Let's do what we really want to do, and what Fox really wants us to do. Let's choose from our fair maidens. We'll save the hard questions for people who don't believe in fairy tales. We are faith-based viewers, romantics who know that "Joe Millionaire," like all romances -- like love itself -- does not bear up under close scrutiny.

We are left with 24-year-old Melissa, a simpering whiny girl with pouty lips and curls so overmoussed that you can smell the alcohol escaping from your TV's speakers. She is there mostly for unintentional comic relief, like when she tells Evan, over a dinner she refused to help cook, "If I had the money, and the time, I'd wanna go to Africa, to bathe the children. And give them shots. I can't help it, I'm a mercenary person."

We will give her the benefit of the doubt and assume she meant missionary.

There's Sarah, whose unbridled cattiness makes it impossible to believe that even Evan wouldn't see through her. Sarah is the girl everybody feared so much in high school that they voted her "most popular" even though they hated her. Her smile is sweet and confident; she knows exactly how to play her Mr. Wonderful. And she's given to saying things in semiprivate like, "Oh, what a slut" and "I can't wait to see that bitch go down."

On the most recent date, Sarah drinks Evan under the table and then follows him off camera and out onto the grounds of his estate. We don't see any of the action, but the producers have graciously supplied us with subtitled sound effects -- to accompany a view of the courtyard:

We're not sure if Sarah swallows Marriott's millionaire act, but at least we know she swallows.

And finally, Zora, sweet Zora, the ivory girl, whose russet brown hair cascades in fresh waves down her back, who clams up whenever she and Evan are alone, but whose face lights up like the sun the moment she gets on horseback. For the most part, she withdraws from evil gossip sessions back in the girls' den, she speaks of shyness, unsureness, she smiles, she watches. Everything about Zora is fresh, natural and clean -- like a douche.

"I like hanging out with her, she's so good, she's so decent," confides Evan, "but when I'm with her I feel like I'm in a Disney movie."

But not so fast. Zora is a substitute high school teacher -- and part-time model -- who lives in Orange County. And she's from Jersey. How do we know it's modesty that drives her to cover up a bit in the hot tub? Maybe it's because Zora knows that the only thing sexier than a babe in a hot tub is a babe in a wet tank top?

What if Mojo was the true innocent?

It was clear from the start that Mojo's days were numbered. She was, well, she was tacky. She couldn't dress. She had a grammar problem. And worst of all, she didn't know how to hide her lust for money, her almost childlike belief that if she just stared at him hard enough, licked her lips frequently enough, pressed her breasts into his face often enough, he would give in to her charms.

And she couldn't hide anything, not from us, not from Evan. First she showed him her photo album, along with a check, dated two years into the future, payable to herself, for $1 million. "Just like Jim Carrey," she told Evan, who stared back at her poker-faced. "Did you know Jim Carrey did that?" she went on, with no encouragement. "I think he did it for 5 million, though."

She read him a love poem she'd written for him, before ever meeting him. Its last line came in the form of one of those photo puzzles you can get made for $7.99 at Walgreens. And the puzzle was a full-body shot of her! With the words "I choose you" scrawled like a prayer over her belly.

It was excruciating watching Mojo commit relationship hari-kari on prime-time TV. Excruciating, but also tragic, because Mojo really, truly believed in the power of her message. In the "Breakfast at Tiffany's" of her pathetically warped mind, she and Marriott were the whores with the power to redeem each other.

Of course, Mojo had none of Hepburn's grace or charm. The only thing she shared with Holly Golightly was an unabashed avarice coupled with complete naiveté. Like Holly, she was a phony, but a real one.

And like us, she was a believer. She believed in money, and sex appeal, the possiblilty of self-advancement and the need to lie about one's age. She bought the American dream hook, line and sinker, and now she's dangling from it, helplessly, its steel-cold reality ripping through her prematurely wrinkled cheek.