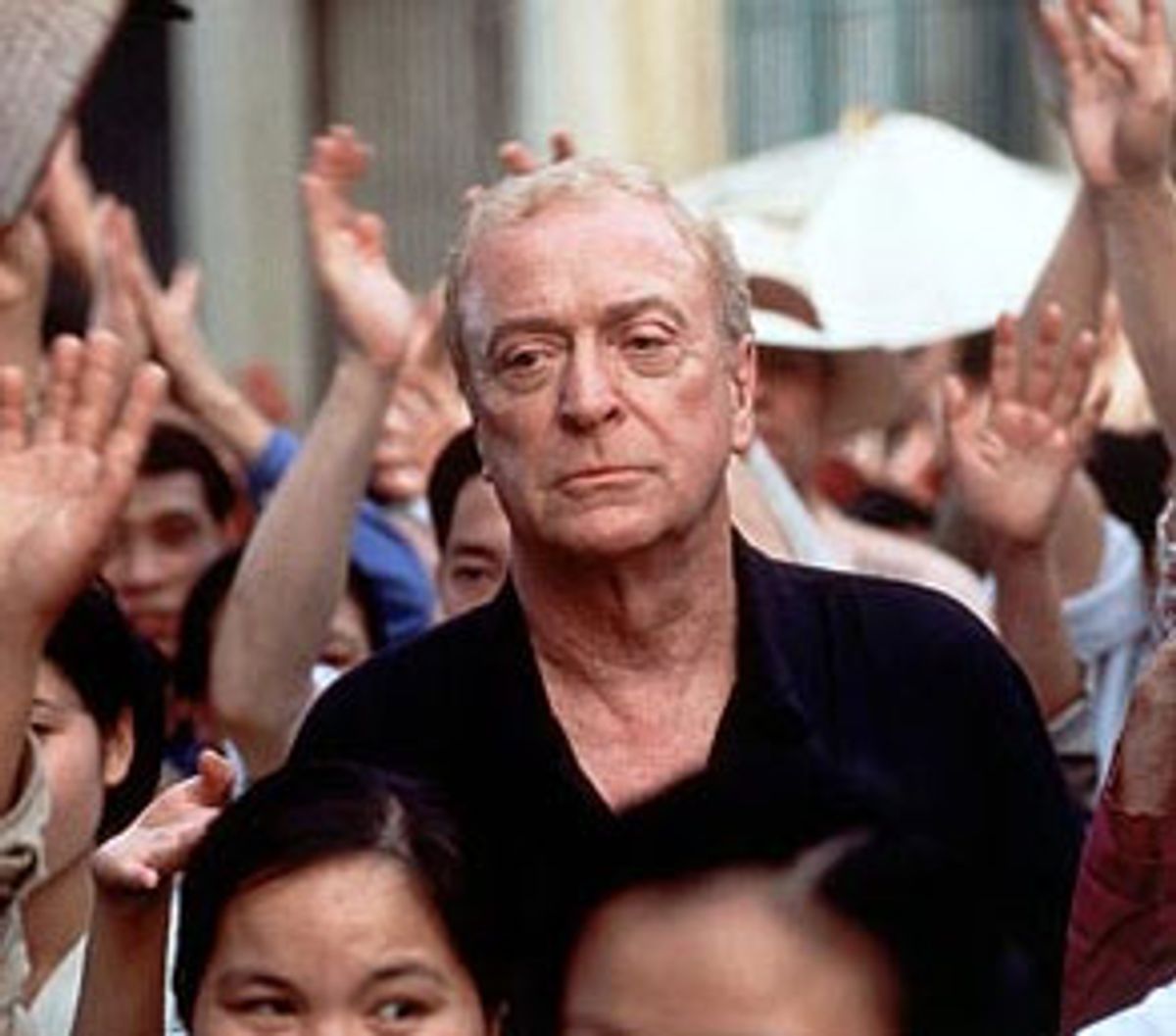 Graham Greene's 1955 "The Quiet American" is one of the most compact epics ever written. In a slender novel that feels richer and more expansive with every paragraph, Greene digs deeply and swiftly into the sorts of giant themes that would tempt most writers to gas on for 600 pages or more: the smudged line that often separates loyalty and rivalry in friendships, the bewildering complexity of romantic love, the insecurities wrought by encroaching old age and both the value and the blind treachery of political idealism. "The Quiet American" is a turbo engine that moves with a sense of purpose but also with supreme delicacy. It's urgent, mournful and unsparing, and when it comes to that rare combination of efficiency and richness, there's no other book quite like it.

Phillip Noyce and all of his actors -- as well as his cinematographer, Christopher Doyle -- understand the delicate forcefulness of Greene's prose, and it's there on the screen in their version of "The Quiet American." Thomas Fowler (Michael Caine) is a correspondent for the London Times stationed in '50s Saigon during the protracted French Indochina War. His job seems to be an afterthought; his employer picks up on that, too, and tries to drag him back to London. Fowler balks, because although he'd profess no profound attachment to Saigon, his submerged but intense feelings for his much younger and very beautiful Vietnamese mistress, Phuong (Do Thi Hai Yen), are another story. At almost the same time he realizes he's about to be displaced in his work, he meets an American newcomer by the name of Alden Pyle (Brendan Fraser), an idealistic and enthusiastic aid worker with big ideas for solving the problems between the French and the Communists in Vietnam.

Fowler is partly amused and partly annoyed by Pyle, but he can't help liking him, despite the fact that Pyle has become smitten with Phuong. Fowler also realizes that the much-younger Pyle has infinitely more to offer Phuong than he does: Fowler has left a long-disintegrated marriage behind him in England, but he can't marry Phuong since his wife, a Catholic, refuses to grant him a divorce.

Noyce, working from a screenplay adaptation by Christopher Hampton and Robert Schenkkan, knows just how to navigate the wary dance between Fowler and Pyle, an uneasy but deep-rooted personal relationship that also has profound political implications. Pyle, in addition to being Fowler's friend and romantic rival, isn't everything he appears to be, but by the time we're clued in to the more sinister implications of his work, it's too late. Like Fowler, we already like Pyle, and Noyce leads us resolutely to that conclusion without sacrificing any of Greene's subtlety.

There's loyalty to Greene in nearly every frame of "The Quiet American," and inherent within Noyce's approach is the idea that loyalty is much more valuable than slavish faithfulness (a Greeneian idea if there ever was one). Noyce's movie takes a misstep here and there: At times the music (by Craig Armstrong) feels overbearing and wrong, or just too synthetic for the story. But in most other ways, Noyce takes a great deal of care with this adaptation. For one thing, he includes as much of Greene's potent shorthand as he can without weighing the movie down.

Greene's prose is so distilled that you realize a filmmaker could soak up the better part of 15 minutes dramatizing the emotional resonance Greene packs into just a sentence or two. But Noyce treads softly and cautiously, especially when the temptation to overdramatize is greatest. After showing us an explosion in a busy urban square that kills a number of civilians, he has Fowler recall bits and pieces of the scene in brief flashbacks, encapsulated by a few terse sentences. So we see, as Greene wrote, the way "a woman sat on the ground with what was left of her baby in her lap; with a kind of modesty she had covered it with her straw peasant hat." But we see that brief scene through Fowler's eyes, not through the omniscience of the director, which makes all the difference.

Cinematographer Doyle -- the genius behind the look of lush, evocative pictures like Wong Kar Wei's "In the Mood for Love" and "Chungking Express" -- infuses the movie's surface with the glow of moist heat. His country landscapes are all simmering greens that speak of danger and innocence in equal measure; and his city scenes capture the beckoning, but sometimes misleading, coolness of "proper-looking" colonial buildings and dark wood.

And the actors are all in sync with Greene's nuanced contradictions, too. Hai Yen has relatively few lines, but she resolutely plays a character and not a type: With a few barely perceptible shifts in her facial expression, she shows waves of feeling that are almost impossible to put into words. It's in Phuong's nature (as well as being part of her culture) to be compliant and easygoing. Yet as Hai Yen plays her, we see her distaste at finding herself a pawn between the two men -- a distaste she'd be too polite to ever express, but which nonetheless lurks in that place where politeness has no meaning.

Fraser plays Pyle with so much shambling, good-natured bonhomie that it might be all too easy to overlook how good he is. Fraser understands that the physicality of his role -- his purely American carriage, for example -- is just as important as line delivery. Maybe that's why he plays Pyle as a man who seems too big for every room he enters; he's large and booming without ever being loud -- part of the point, of course, of Greene's sly title, but one that's very difficult to translate into a performance. Fraser understands it intuitively.

It feels wrong to say that Michael Caine gives the performance of his career -- or should that be careers? -- not just because he's already given so many astonishing performances ("Educating Rita," "The Cider House Rules"), but because his Fowler suggests that there are plenty of unpredictable performances in him yet. "If I were to lose Phuong, it would be the beginning of death," Fowler tells Pyle flatly, after Pyle has unburdened himself regarding his love for Fowler's girl.

Caine makes you feel the weary weight of each word, even though he sends the line out as lightly as if it were a dried-out cornhusk being taken by the wind. At one point Fowler tromps through the American Embassy in a rage; he's distraught because Pyle has taken Phuong from him, but he's so beyond that stereotypical (yet very real) English embarrassment that he doesn't care how badly he behaves. What Caine shows us at the end of that scene is so raw and so intimate that you wish you could turn away from the screen. It's the first time we see the extent of Fowler's fragility, which is only partly a function of his age -- it's embedded deep in his character as well. Caine plays that vulnerability without succumbing to softness, because Fowler's vulnerability is far beyond the swollen bumps and bruises of the young: All that's left for him, if he fails to hold himself together, is crumbling.

Greene's novel was amazingly prescient about the increasingly aggressive role the United States would take in Vietnam. Noyce's movie, even though it was made with the benefit of hindsight, manages to capture the wonder and awe of Greene's perceptiveness. Greene foresaw the end of the story of America's involvement in Vietnam (or at least the ending to one of its chapters) long before history had even written it. But even in the midst of this extraordinarily intricate political novel, Greene makes us understand that it's our personal motivations -- chiefly, our acknowledgment of whom we love and why -- that turn us into political beings.

That's not the same as saying "The political is personal," because even if that's somewhat true, it's too tidy a summation of either Greene's novel or Noyce's adaptation of it. It seems more accurate to say that the personal drives the political -- often with a feral force that's almost beyond our understanding. Greene got that down, cold, in a very short book; almost half a century later, Noyce proves that it's still true. Or, perhaps, more true than ever.