After 70 years of writing books, John Sanford has won little fame and less money, but his commitment to his craft and one great, true love have kept him going. 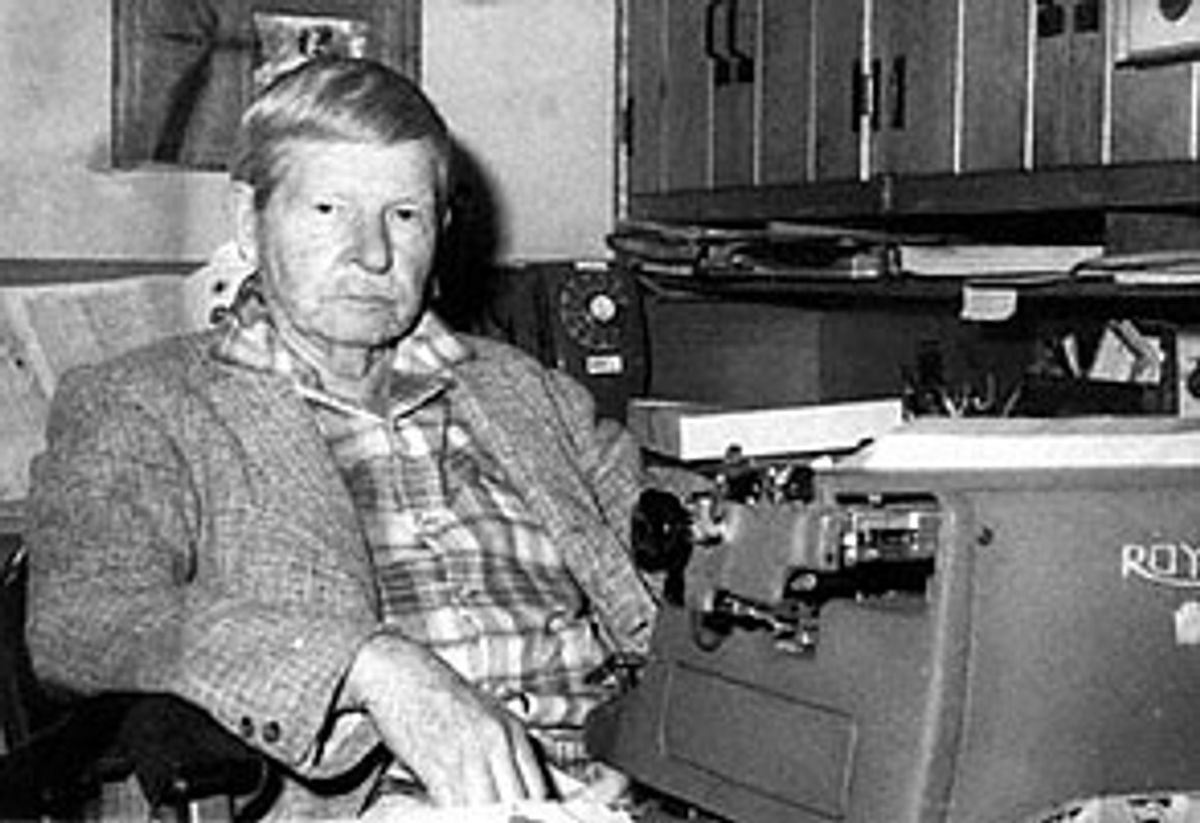 This morning John Sanford will get up and do what he's done every morning for the past 70 years: write. At 98 (99 in May), Sanford may be the oldest working writer in the nation. In a literary climate where novelists in their early 20s make headlines by getting $500,000 advances on their first books, he has never enjoyed the kind of success that starry-eyed writing workshop graduates dream about. But he keeps on writing all the same.

There has been recognition over the decades as well as struggle. Sanford has been called "The Treasure of Santa Barbara," and there's a coterie of devoted readers who swear by the lyricism of his prose and his flashes of insight into American history and affairs.

But it's the author's sheer commitment to his work, not the hunger for acclaim or money, that keeps him going. Sanford completes a book every two years or so and then spends more years trying to get his work published. "My books don't sell," he says, "and publishers want books that sell, like soap."

Now Sanford has yet another publisher. "A Palace of Silver" is scheduled for release by Capra Press before March. It will be Sanford's 24th book and marks his return to Capra, which issued three other of his books over the years. Capra's new owner, Robert Bason, is thrilled to have him inaugurate Capra's new beginning.

"A Palace of Silver" is memoir of Sanford's extraordinary life with his late wife, the screenwriter Marguerite Roberts. It's also a reflective look back on the Hollywood blacklist that troubled them both, and a true love story. The book's title comes from a line in the Song of Solomon: "We will build upon her a palace of silver." Sanford's book is the palace; his poetic words the silver. His wife, Maggie, is the rock he built on.

After her death in l989, Sanford resurrected his wife in all of his books, beginning with "Maggie: A Love Story." "This book is a master class in love," Los Angeles Times reviewer Elaine Kendall wrote. "You could ransack an entire library without learning as much about commitment, mutual respect, delight, devotion and resilience as you'll find in these succinct pages. The story is told in some of the most distinctive prose written in this century."

It was a style honed with the help of his wife. She "discovered" Sanford when they were both screenwriters, working on Clark Gable's first big hit, "Honky Tonk." She urged him to quit writing films. "Your main holt is books," she said. She had liked his first book, "The Water Wheel," published in 1933. That was enough for her.

Sanford, born Julian Shapiro, began writing after he left Fordham University with a degree in law. His friend, Nathan Weinstein, later to become Nathaniel West, announced to him one day, "I'm writing a book." Such a prospect intrigued Shapiro and he began "Water Wheel," in which a character named John Sanford was the protagonist. For his second book, he adopted the name.

With Maggie's encouragement and support, Sanford began pounding out his books. From the beginning, he established a rigid routine, getting up at 6 a.m. to sit before his typewriter. He says he doesn't know what he'll write about until he places a sheet of Testimony bond in the roller; then his unconscious starts in. In the evening, he'd read his output to Maggie. She was a sharp and discerning critic. She learned not to waste words working as a contract writer for MGM for 12 years, becoming one of its highest paid writers and producing dozens of scripts.

"Write our books," she insisted.

"I've got to support my father," Sanford protested.

"I'll support your father and you, too," she said.

And she did, for 50 years. He wrote six novels and then "A More Goodly Country," a book out of the usual, a series of vignettes much like snapshots over the American historical landscape. He followed with "View From This Wilderness" which explored American literature through the lens of history, and "To Feed Their Hopes" (later reprinted as "A Book of American Women") and then his monumental autobiography, "Scenes From The Life of An American Jew," in five volumes. It was writing characterized by vividness and directness, and by Sanford's outrage over injustice and prejudice.

"On her own, she became one of the most skilled screenwriters of her time," Sanford recalled of Maggie when he was awarded the Robert Kirsch award in 1999 by the Los Angeles Times. "On my own, I'd have starved on my royalties, and so would my father, for the books I chose to write found little favor with the public.

"It was Maggie who made it possible for me to forget the public, to write what I pleased and still dine on the morrow. She gave me a liberty that few writers enjoy, but even more important to me was the warmth she imparted to the very air I breathed 'til the day she died."

Her support also extended to his politics. Sanford, a rebel from the age of 10 when his mother's died, joined the Communist Party in 1939; Maggie, "desiring only to accompany you, to go whither you went," followed his "headlong lead." She was a reformer, not a rebel, Sanford said. The distinction didn't matter in 1951 when they were subpoenaed by the House Un-American Activities Committee.

On the day they refused to name names to the committee, she was fired from MGM. Both were blacklisted. They became closer as they suffered through the 10-year political and economic dust storm that buried them. Sanford didn't write a lick during that time, and Maggie attempted a play or two. "She spoke not one word of recrimination to me in those 10 years," Sanford told the Los Angeles Times. It is Sanford who berates himself and the national paranoia of McCarthyism as he relives that period in "A Palace of Silver."

Ever since Maggie's death, Sanford has maintained their house in the Montecito hills, a few miles south of Santa Barbara, as a museum to her memory. The bedroom they shared is as it was the day she left the house to be taken to the hospital. Photographs of her are everywhere: in the large downstairs study where a corner is set aside for his old Royal, in the small bedroom where he sleeps, in the kitchen where his hand-made frames for the snapshots crowd shelves around the table.

As he serves tea and Sara Lee cake to his guests, Sanford tries to sum up his life. "I'm satisfied with what I've done. I've squeezed every ounce of story from my life. I've done what I wanted: writing about important stuff."

He remembers when Maggie pointed to a living room bookcase.

"That whole top shelf is ours," she said.

He laughed, he said. "Doesn't anything shake you?" he asked her. "That after so many books, I'm still an unknown? That they don't sell and never did? That publishers run for cover when they see me coming?"

And she replied: "Nothing shakes me. You were good to begin with and you only got better with time. You're -- what now? -- 84. Name me another writer on the rise at 84?"

At 98 he's still rising. One more book, "A Dinner of Herbs," just finished; two others, "Little Sister Spoken For" and "A Citizen of No Mean City," awaiting publishers.

He's a small man, bent and shriveled. His once vigorous and jaunty step is now a shuffle. His full head of gray is as wild as a patch of meadow grass; his mustache a thick brush, his chin and jowls wispy with the beginnings of a beard. To questions of "How're you feeling?" he says "Don't ask."

Sometime ago, the country celebrated the 100th birthdays of Langston Hughes and John Steinbeck. Both were declared national treasures years after their deaths. We have a national treasure in our midst today and the nation doesn't have to wait for him to reach 100 before it celebrates his life and works.

Mel Fiske is the author of Radical!: A Memoir of Wars, Communists and Work."