The feds are ramping up their assault on the environment -- and the cash-strapped state is finding it hard to fight back. 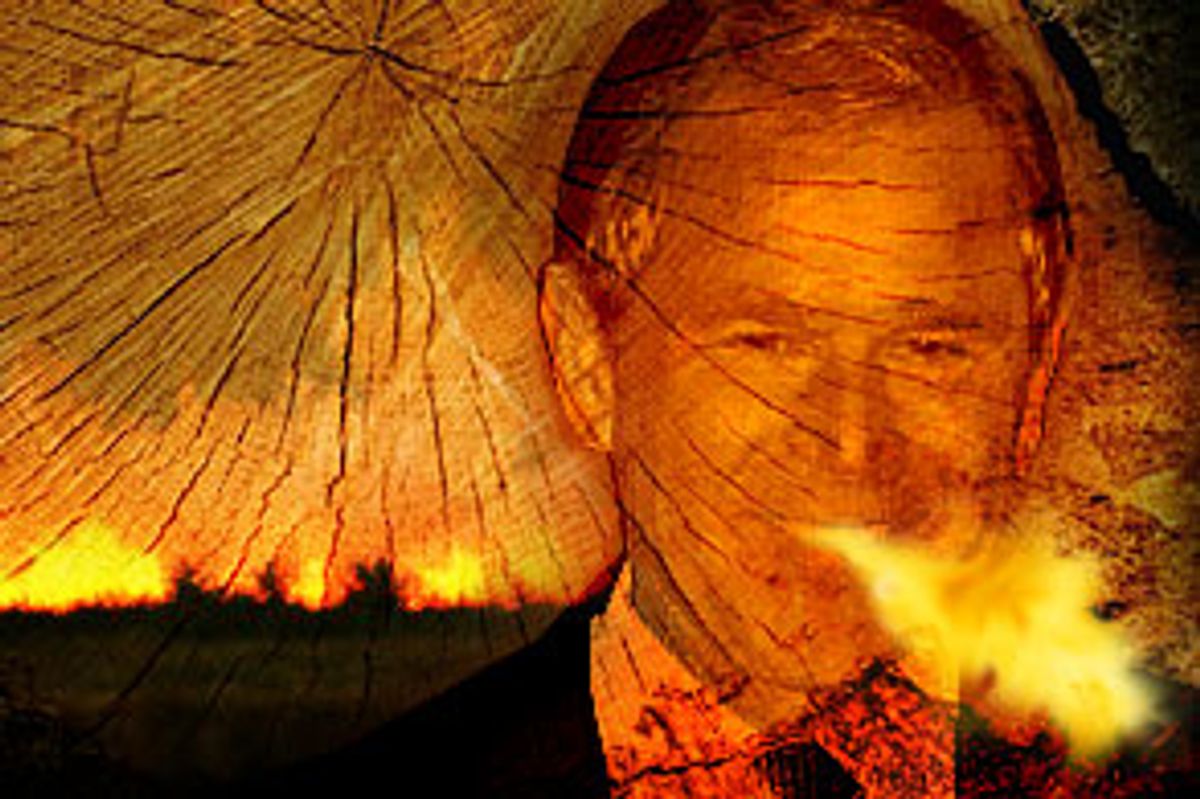 In the middle of a $36 billion state budget crisis, California state legislators convened a special hearing on Monday afternoon at the capital to address another state disaster: President Bush's assault on California's environmental policies.

"Not since General Sherman's march on Georgia has the federal government been so aggressive with a state, and we're not even at war with them," state Attorney General Bill Lockyer testified before members of the California Assembly's natural resources committee.

Lockyer submitted a 10-page document to the committee outlining a "laundry-list" of ways that California's protections are under attack, from new federal proposals for commercial logging of 100-year-old giant sequoias in Giant Sequoia National Monument to opening up the California Desert Conservation Area to new open-pit gold mining.

Lockyer mocked the doublespeak the feds have used to disguise their environmental rollbacks as protections. "It's almost been an Orwellian exercise," he said, singling out a passage in a forestry document that recommended "mechanical treatment of vegetation."

"That means cutting down trees."

California has been hit especially hard by the Bush administration's sweeping pro-industry environmental agenda. Although California has some of the strictest environmental protections in the world, some 47 percent of land within the state is owned by the federal government, including 19 national forests. That pits the most eco-regulation-happy state in the union against a pro-business federal government that controls almost half of the land within its borders.

Skirmishes between the feds and California are occurring on multiple fronts. The Bush administration has explicitly challenged California's stringent environmental regulations in court on behalf of its friends in industry. It joined forces with the automotive industry to fight against California's "zero-emissions vehicles" requirements, and is supporting oil industry plans to get 36 new offshore leases for drilling oil without prior state environmental review.

California's ability to fight back is limited. The assault is coming at a time when the state's fiscal crisis makes it difficult to marshal resources, and Democratic Gov. Gray Davis, judging by the performance of his representatives at the hearing, isn't eager to plunge into the fray while in the middle of slashing the state budget. "This administration has demonstrated a commitment to absolutely eviscerating environmental protections in all areas," railed Assembly member Hannah-Beth Jackson, a Democrat on the natural resources committee, speaking at a press conference before the committee's forum on "Federal Rollback of Environmental Protections: Challenges to Protect California's Environmental Laws."

At the forum, the committee heard a litany of doom and gloom from environmental groups including the Wilderness Society, the Natural Resources Defense Council and the California Native Plants Society, enumerating how the 200 federal rollbacks of environmental protections in the first two years of the Bush administration will affect the state.

"I'm getting very depressed, as I'm listening," Jackson commented, as the afternoon wore on.

But state representatives from Gov. Davis' regulatory agencies, such as the Air Resources Board, appeared at the meeting purely in a "technical" capacity, advising only on points of policy to avoid implicitly miring Davis in the all-out Bush-bashing fest.

Democrats Jackson and Lockyer also took exaggerated pains to stress that this hearing wasn't meant as an exercise in pure partisanship, praising the environmental records of Republican presidents from Theodore Roosevelt to Richard Nixon to Ronald Reagan and George Bush Sr.

During the testimony concerning the mounting rollbacks, there were some specific calls for state action. Bonnie Holmes-Gen, a lobbyist from the American Lung Association testifying before the committee, asked California to join Maine, Maryland and other northeastern states that are suing the Environmental Protection Agency for relaxing clean-air requirements on polluting industries. Lockyer told the committee that his office is looking into joining that suit, but is also considering filing its own.

Carol Witham, from the California Native Plant Society, explained that although the state has already lost 91 percent of its wetlands, some of the remaining wetlands are suddenly without federal protection. As part of some 20 million acres of so-called isolated wetlands around the country that recently lost federal protection, California's vernal pools could now be open for development or industrial pollution. Witham challenged the committee to sponsor legislation to replace the federal regulation with its own state protections: "California should consider enacting appropriate regulation," she ventured.

But members of the committee seemed at a loss as to what legislation they could bring to protect wetlands -- or any of a myriad of other resources threatened by the feds -- given the state's current fiscal crisis. The federal attack on California's environmental policy is coming at a time when the cash-strapped state is hardly in a position to fight back.

And even the attorney general, for all his not-since-the-Civil-War bravado, conceded that his office may face cuts under the new state budget, meaning fewer resources for arguing for states' rights in court.

One case that California is already committed to: Lockyer's office is bringing suit, along with Connecticut, Vermont, Maine, New Jersey and Nevada, as well as the Natural Resources Defense Council, against the U.S. Energy Department in an effort to improve the energy efficiency of air conditioners.

In the last days of the Clinton administration, energy efficiency standards for the appliances were increased, but the Bush administration withdrew the new rules soon after it took office.