Badass black bikers, led by an awesome Laurence Fishburne, tear up the L.A. night. But there's not enough fast and even less furious. 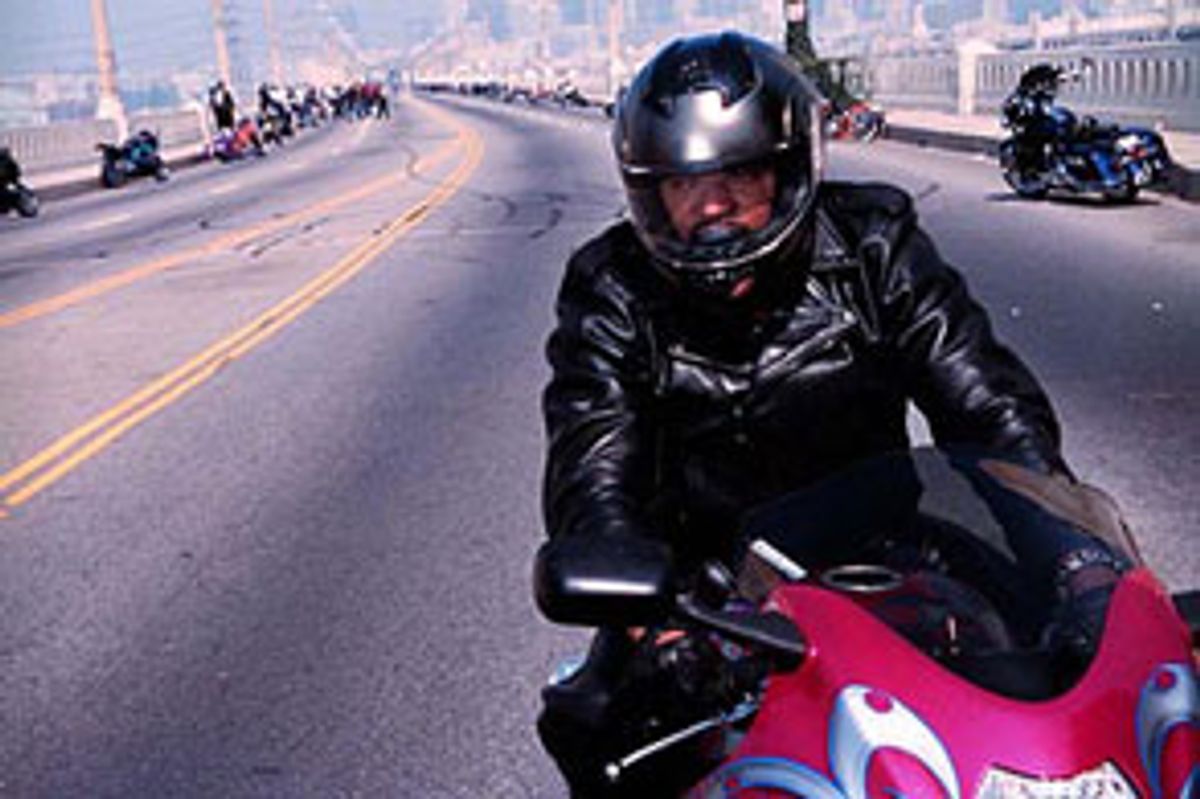 You already know "Biker Boyz" is a silly movie. If you need more evidence than the Z in the title, there is the ridiculous tag line -- "Burn rubber, not your soul" -- and protagonists named "Kid" and "Smoke."

There will never be a good movie with a character named "Smoke."

"Biker Boyz" is about fast motorcycles and the tough dudes -- and even tougher chicks -- who soup them up in illegal street races. Unfortunately, it's about more than that. It's also about fathers and sons, about hubris and respect and about learning lessons. There are not enough explosions for this kind of movie.

There are, however, a lot of wheelies and donuts. There is also more than one scene with a woman whose breasts might hop out of their harness and run away to star in another movie. And Kid Rock wears a studded dog collar. All of this is a way of saying that "Biker Boyz" manages to burn rubber and your soul.

Smoke is played by Laurence Fishburne, among the best of American actors (all the way back to "Apocalypse Now"), and yet not even his credible performance as an aging motorcycle racer can save this wanna-B movie. His somewhat road-weary g-friend is Lisa Bonet in a shockingly sexless role, and his foil is played by Derek Luke (the star of "Antwone Fisher"). Luke is Kid, the 19-year-old hotshot who wants to be the "King of Cali," or the hottest racer on the California set, as decided at an ad hoc convention in the godforsaken Central Valley city of Fresno.

It wouldn't surprise me to hear that Fishburne went method actor for this role. He takes it seriously, down to his chop sideburns and pointy soul patch. Everything's right, from the beer gut to the POW pin on his black leather vest, and he maintains his dignity through lines like, "When you step to me, you better come correct."

That means that Kid has to be a legit club rider first and then win some races before he can go up against Smoke. He topples this set of obstacles by enlisting buddies Stuntman (Brendan Fehr) and Primo (a hilarious Rick Gonzalez) to join him in their own Biker Boyz club, bearers of yellow and black colors, catholic in their embrace of multiethnic kids on four-wheel ATVs.

"Biker Boyz" is based on a long feature story written by Michael Gougis for the now-defunct weekly newspaper New Times Los Angeles. It's probably unfair to blame him for this road rash. His piece about black motorcycle clubs in L.A., and their self-created circuit of loosely organized street races, transported a reader into a rich underworld hidden right in the middle of the highway.

"Biker Boyz" the movie works to take us to that same place, but it's hard to believe that the filmmakers have ever been there. (Even though "Pokey," the racing hero of the article, was a consultant on the film, and is thanked along with several real-life clubs and "all riders who Represent" in the credits.) I'm no expert on black motorcycle clubs in Los Angeles, but I have to think there's a massive gap between the "beat-up stucco building with iron bars over the doors and windows, the word 'Zodiacs' on a painted sign over the door" from Gougis' story and the art-directed cribs festooned with custom-built steel armchairs and modernist sculpture that stand in for the clubhouses in the film.

The problem is that director Reggie Rock Bythewood and co-writer Craig Fernandez don't seem to believe in their source material. Instead of just telling a story about a subculture -- the bets, the hustles, the wack-ass roadhouse hip-hop parties -- they try to set another tale on top of it. It's a decidedly less interesting story. You want to know where black motorcycle clubs came from? What happens when riders get old? Why a lawyer would want to closet his pinstripes and play badass at night? Of course you do. But "Biker Boyz" wants to tell you this: Young men have oedipal complexes.

There's some suggestion, no doubt encouraged by its producers, that "Biker Boyz" is a motorcycle version of "The Fast and the Furious." It's not. Part of what made that Vin Diesel vehicle so fun was that it knew it was a big dumb movie about cars going fast. More plot? They might be car thieves. More? Tough dudes and hot chicks.

In "Biker Boyz" the stunts, not to mention the editing -- the only thing that's going to make a racing movie exciting to someone who can't tell a carburetor from a cam shaft -- just aren't that good. We know that those souped-up bikes with their sweet-ass custom paint jobs go about 170 miles per hour, but we don't learn much more. And we're told that you have to have a lot of heart to win the quarter-mile street race, but we're given very little of the strategy: How you come off the line, why you outfit the bike with a narrow front tire or any other information about what wins a race. In a way, with smoke burning and sparks flying, we never know what we're looking at. We just know, if we've seen motorcycle riders fly through the air on ESPN2, that they can do more than this.

There's some indication that the directors just wanted to make an exploitation movie and be done with it, but instead of focusing on Kid and his crew hustling other riders it zooms past them, refusing to dwell on a hero stuck in his Prince Hal phase. Even the "fourth annual bikini bike wash" we witness is organized to raise money for schoolbooks -- you know, for the kids.

I guess no one needs to see "The Wild One" -- or even Roger Corman's "The Wild Angels" -- set 50 years later in black Los Angeles. We'd probably complain about the stereotypes, about the portrayal of listless black men terrorizing good folk and rebelling against whatever ya got. But I wanted, more than just a little, for "Biker Boyz" to be bad. The subtext of "Biker Boyz" is that all these fast motorcycle riders are just the same as any other morally upright American citizen. They might be rebels, but it's mostly just because they like bikes.

I want more from an antihero. "You ain't got the heart to be the King of Cali," Smoke tells Kid one night. I never believed he had the balls.