Nothing is what it seems -- especially Al Pacino's jazzy, freewheeling performance -- in this preposterous CIA thriller. 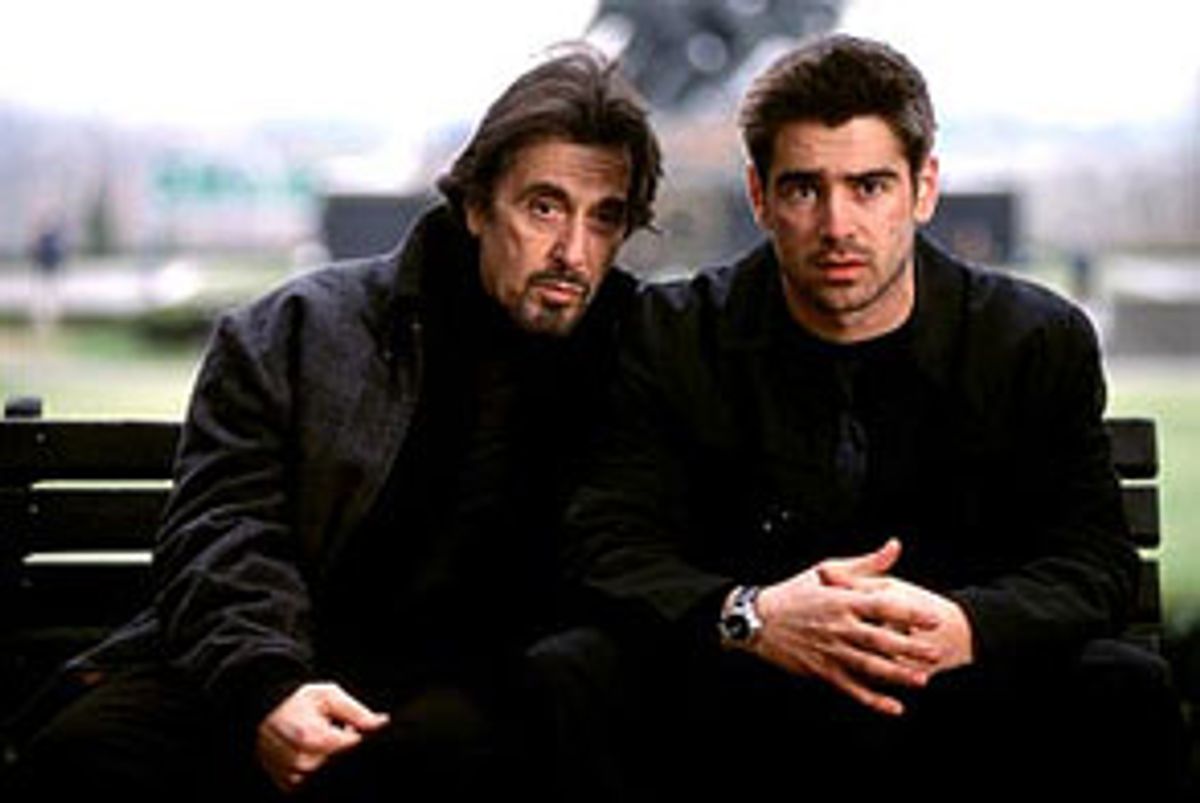 There's a recurring problem with contemporary thrillers, and it's turning into a very serious one: Everyone knows how to wind you up, but nobody knows how to set you down.

"The Recruit," directed by Roger Donaldson and written by Roger Towne, Kurt Wimmer and Mitch Glazer, is just the latest forgettable thriller that might have been enjoyable if only its conclusion lived up to its windup. James Clayton (Colin Farrell) has just graduated from MIT at the top of his class. While peddling his fancy software project at a job fair -- he's hoping to get an offer from Dell -- he's spotted by a rumpled, unshaven CIA recruiter who looks as if he hasn't slept in weeks. As sleeping on the job seemed to be a prerequisite for CIA agents through the '90s at least, you can only guess that this guy is some sort of old-school dinosaur who believes in keeping both droopy eyes open at all times.

That's pretty close to right: This recruiter is Walter Burke (Al Pacino), and he's got at least one of his droopy eyes on the hip, feisty young Clayton, whose own father, allegedly a Shell Oil exec, died in a mysterious plane crash. In other words, Clayton's got CIA pedigree all over him.

Clayton agrees to undergo CIA training at a remote facility known as "the farm," a kind of Moose Lodge decorated with CIA insignia instead of antlers. (The trainees are also squired around in vans like the ones often used to shuttle senior citizens around -- not the sort of thing that would call attention to them or anything.) What Clayton and his classmates will learn at the farm -- and Burke is, of course, one of the chief instructors -- is top secret; many of the trainees, as they're repeatedly told, won't make the cut and become full-fledged agents.

Though he's not sure he wants to be a part of the CIA anyway, Clayton does take a romantic interest in fellow recruit Layla Moore (Bridget Moynahan, giving the old college try in a watery role that demands little of her), and the two of them engage in cruel cat-and-mole games, asking each other embarrassing personal questions during lie-detector training, for example.

Burke has Clayton in mind for a special project, and if, within the first half hour, you figure out where "The Recruit" is headed, don't say I didn't warn you. The first two-thirds of the movie are clever in a preposterous way, as well as being reasonably entertaining. Donaldson really makes you wonder what he's leading up to. The CIA training is designed to make students not just ever-watchful but outright paranoid, and even though Clayton flinches now and then, the movie gets us on his side by showing us how brightly he bounces back from all the abuse.

This is the first time I've seen Colin Farrell act with a believable spark: Clayton is such a likable, regular guy that you really hate to see him take a beating at the hands of a bunch of goons who have grabbed him, stuffed him into a van and tortured him with two hairbrushy-looking things that shoot scary sparks. (It's a tribute to Donaldson's restraint, though, that he doesn't actually show us the torture scene -- he alludes to it just enough for us to acknowledge its impact.)

Burke has told young Clayton that everything is a test, and (you'll hear this one over and over again, so listen up, kids) nothing is as it seems. And on that last one, he's so right, especially if we're talking about Pacino's performance. He's great fun to watch, particularly at first: Pacino is a windmill of an actor, a guy who, at this stage of his career at least, comes out with both arms swinging wildly at anything and everything. It doesn't matter whether he lands his punches or not; the spectacle is all that matters, and even though he gives his all in "respectable" performances (like that of the troubled cop in "Insomnia"), he's much more fun to watch when he's courting, rather than subduing, his own internal chaos.

Which is why you can't help warming to his early scenes here, like the one in which Clayton asks him (blinking his very big, very innocent cow eyes) what might happen if he joins the CIA: "Will I have to kill anyone?" Burke looks at him quizzically, head cocked like a grizzled old hunting dog: "Would you like to?" At that point, it's easy to fool yourself with your own delight, thinking nothing is out of bounds for Burke, or for Pacino.

But then you realize that nothing is ever out of bounds for Pacino, which is why his craziness these days is so often ho-hum. He punches out ridiculous lines like "You want answers, you're in the wrong car. All I have are secrets" as if they were off-the-cuff phrases in a jazz solo. But at this point, they're phrases he's repeated again and again. He can deliver lines like these, and roles like this one, in his sleep. But do we need to spend our precious waking hours watching them? Wonderful as Pacino has been in so many roles over the course of his career, it's starting to feel as if it's not always a fair tradeoff.

It's hard to know where to dump the blame for "The Recruit" and its problems. Shot by Stuart Dryburgh, it has a crisp, clean look; at first it chugs along professionally and competently. But once the movie has rattled on for an hour or so, grabbing you here and there with a witty twist, you begin to sense a shift in the action. A mood of desperation descends on the picture; you can almost feel Towne, Wimmer and Glazer, like a desperate tag team, scrambling to tie up the action in a reasonable way. (One of their tactics is to have Clayton find a note that reads, "Clayton taking too much interest. Request immediate delivery." As we all know, CIA guys are always writing notes like that and leaving them around.)

Donaldson, a veteran director who you'd think would know better, directs as if it all makes sense; he may be suspending his own disbelief, but does that give him the right to dangle ours over the edge of a cliff on a slender, fraying bungee cord? Are we not supposed to notice everything that's wrong with, or even just blandly predictable, about the story he's telling?

Pacino gets a truly loopy swan song, in which he delivers a freewheeling speech about corruption and the loss of innocence that feels like an actor's stream-of-consciousness exercise. But it's more a stunt than a true window into Burke's character. That speech stands for everything that's wrong with "The Recruit," and for everything that's ultimately disappointing about it. Though I will say it takes a hell of an imagination to come up with the idea of a CIA Fun Shuttle.