The New Republic busts a cap in the New York Times' backside for ho-ing out on Iraq. 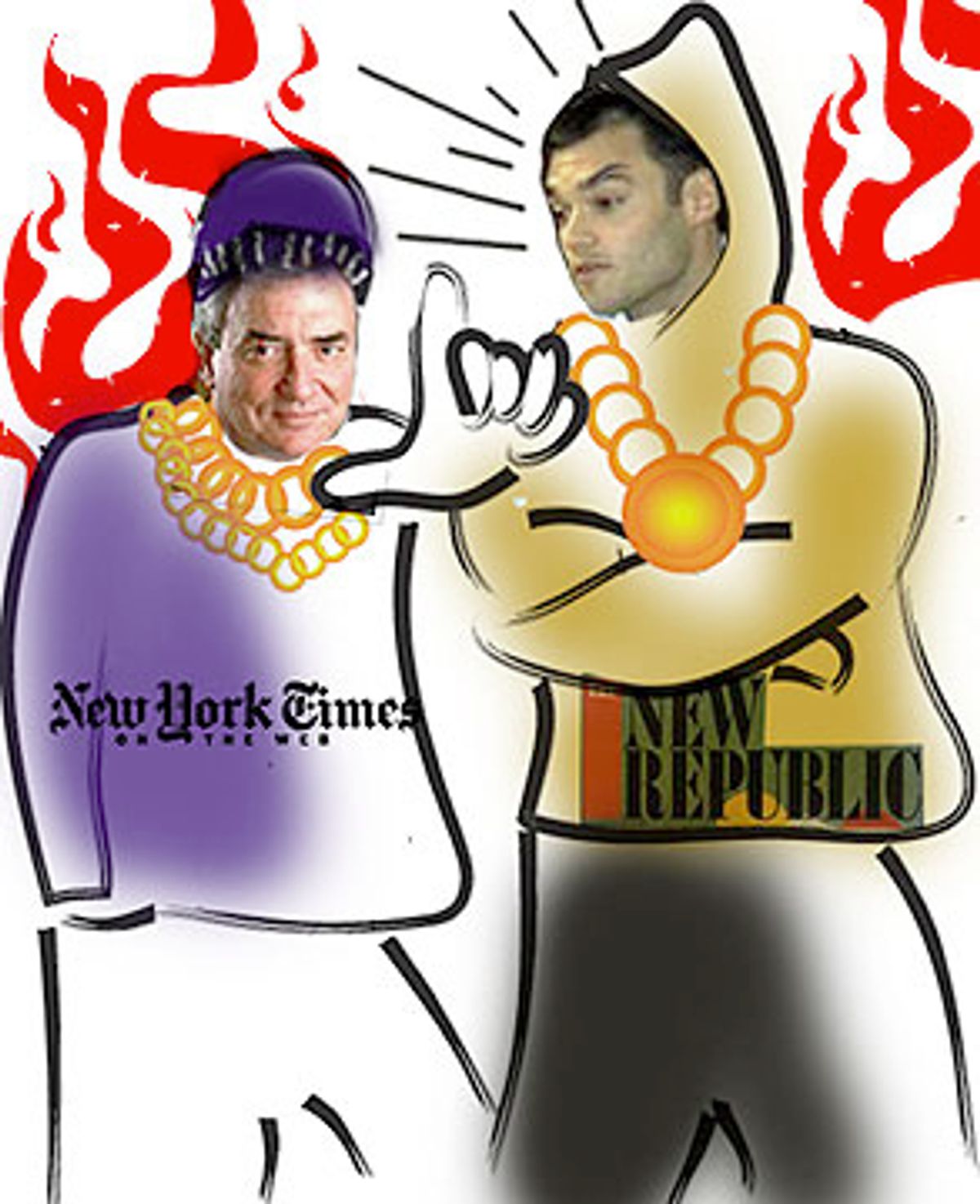 Rival hip-hop magazines the Source and XXL are locked in an increasingly ugly feud that has reared its head in advertising boycotts, on rap records, and in nasty, over-the-top gangsta editorial slams against one another.

The normally left-of-center New Republic penned an editorial blasting fellow liberals at the editorial page of the New York Times for demonstrating "intellectual incoherence" in their views on the war in Iraq.

"This is whack, yo," said Peter ("P Biddy") Beinart, the much-feared editor of TNR, as he slammed that morning's New York Times down onto his desk. "Whack."

"True dat," affirmed executive editor "Snoop-Kitty" Orr, kickin' it old school in DuPont Circle, iced skim venti latte in hand. "Collinsio been acting jainky. One day it's all 'Inspectors, U.N., disarmament,' then she busts a C.K. and disarmament is just an option. Dizaam!"

From the corner boomed the voice of literary editor L.W. Cool-L, former mix-master of J.W.A., his lovely young bride on his lap, a draft of "Kaddish II: This Time It's Personal" by his side.

"How you wanna carry it, nomsayin'?" he asked. "I mean, what's with these homies dissin' my Perle? Why do the Old Gray Lady gotta front?"

From the doorway strode the impressive silhouette of senior editor Li'l Cottle in full bling-bling.

But Li'l Cottle was serious serious. "Bust an Op-Ed in its ass, yo."

"How do you spell 'Hans Blix'?" a copy editor inquired of Raines.

"H to the izz-O," Raines began. But before he could finish, managing editor Gerald Boyeeeeeed ran breathlessly to his side, memos a-flyin' from his pockets.

"Holla at me," Raines instructed.

Boyeeeeeed presented his boss with a faxed copy of the new TNR. "Wishin' that they could be us so all they do is hate," he mumbled under his breath. "But the truth is they don't even come close to our rate base."

"Don't be sweatin' that," Collinsio, ever the voice of reason, implored. "They're playa-hatas. It's infra dig, beneath us, yo."

"Fasheezy, but those D.C. bamas..." Raines' eyes turned Benzo-red as he continued to read the editorial. "'Disarmament has been reduced to a mere preference to be undertaken only if or when international opinion embraces it'? Fuck that sheeyt!"

Raines was livid. "Respect the architect or get broken," he said. Boyeeeeeed trembled and went to go write another memo.

The TNR crew had been known for drive-bys for years. Franzen, Moody, whatever young nizza was livin' lizzarge, L.W. Cool-L and his posse would sidewhow in their P-ride and turn the Charlie Rose green room into a killin' field.

But this was something else. No one has been able to talk reason to either crew, even as circulation numbers for both crews went through the roof.

Grann, Weisberg, Rosen -- all the usual emissaries with expertise in calming Northwest/West Side shoot-outs have lately found themselves shooting blanks. (Matters have not been helped by the controversial "Bones, Thugs & Sullivan," once affiliated with both crews until Raines and he got in each other's dental work. He was savage agitatin'.)

In any case, that brings us to today, where editorials are flying and all sorts of innocents are being caught in the crossfire. Perhaps the sentiments of those of us who love both crews was summed up best in a chat room devoted to the feud. "Isn't it time we learned?" wrote someone called wolfsman. "WE'RE ALL IN THE SAME GANG!"