The case for war has not been made

Colin Powell showed that Saddam Hussein is resisting disarming. But he didn't prove that he's an immediate threat. 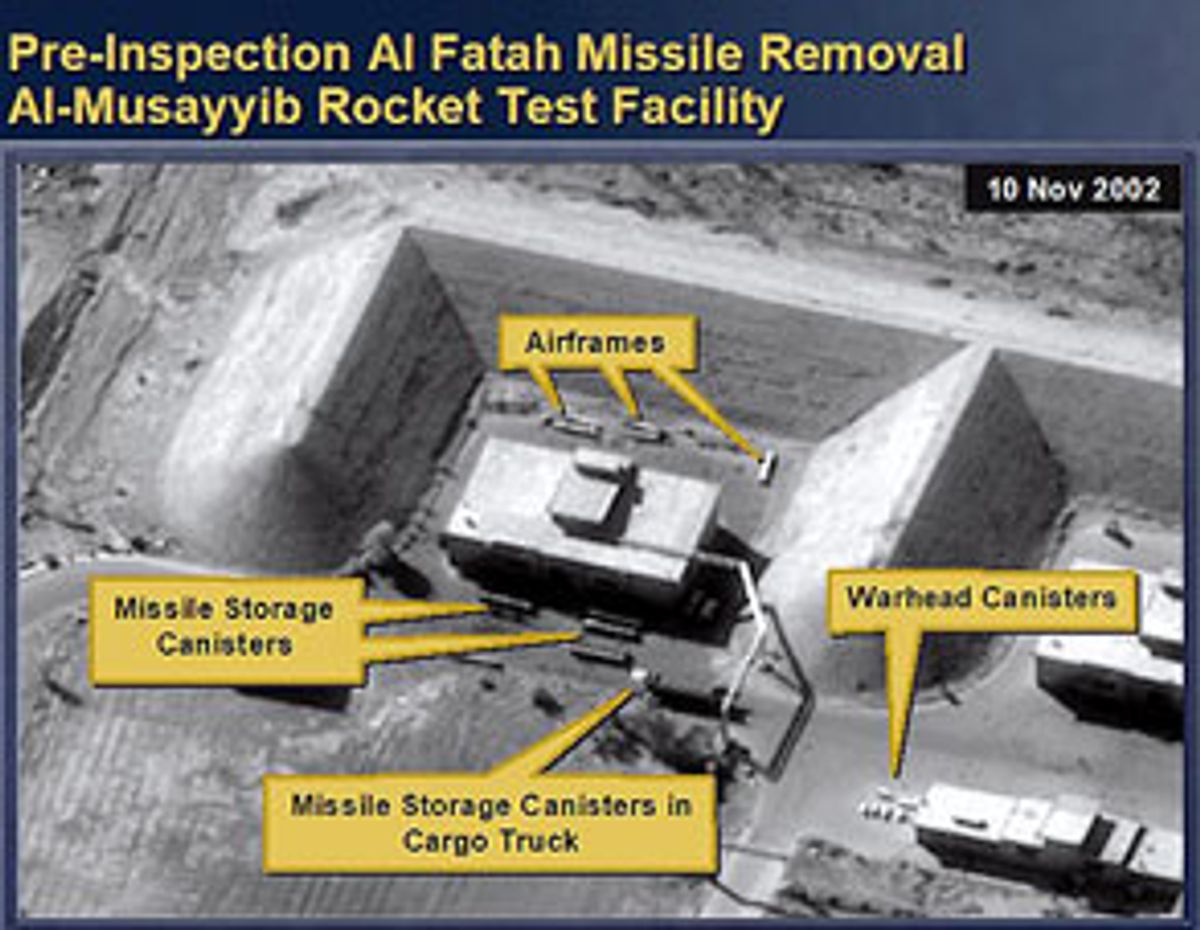 Show and tell
As Colin Powell outlined his case against Iraq before the U.N. Security Council, with CIA director George Tenet sitting behind him, two questions kept occurring to me: Does this information prove that war is the best and only means to implement Resolution 1441? And if this information is accurate, was it provided to the UNMOVIC inspectors in full compliance with the responsibilities placed on all member states by that resolution? (Full text of Powell's remarks is here.)

There are legitimate questions about the interpretation of what the tapes and satellite pictures mean, as we know from reported disputes within and between U.S. agencies over interpretation of intelligence about Iraq. Lacking the technical ability to evaluate this information, we will have to wait for other interpretations to emerge, if they do.

So let's assume that all of the evidence presented by Powell can be taken at face value, as described by him. A Gallup poll today showed that on this issue, he is far more trusted than the president by most Americans, for good reason. Meanwhile, the intercepted conversations played by the secretary of state do seem to reveal panic among members of the Iraqi officer corps over the arrival of inspectors. The tapes suggest that the Republican Guard and other units have tried to conceal evidence of forbidden weapons. Those conversations also indicate more broadly that Iraq is not handing over all its weapons and information to UNMOVIC forthrightly, as required by 1441.

To an untrained eye, the satellite photographs are more difficult to judge, as Powell acknowledged. Pictures of buildings don't tell us what's inside them. If decontamination vehicles have been detected outside certain facilities, that too suggests concealment.

Information obtained from human informants is subject to all the traditional doubts about testimony from defectors, and is therefore less convincing. And even based on defector and prisoner testimony, the information regarding Baghdad's alleged links with Osama bin Laden is still thin. (An essay in today's Wall Street Journal by former Secretary of Defense Bill Cohen advises the administration to drop this line of argument, but it's only available online to subscribers.) Powell didn't even try to suggest that Iraq was involved in any specific terrorist attacks on the United States, let alone the Sept. 11 atrocity.

There was quite a lot of other pertinent information missing from Powell's address. It is hard to listen to him talk about Saddam's violations of human rights and his gassing of the Kurds, without wondering why those events didn't bother the Reagan and Bush administrations when they were actually occurring. (It's easier to understand why he omitted any reference to the American role in arming Iraq and the subsequent coverup under his old boss, the president's father.)

What was most noticeably absent from Powell's presentation, however, was any evidence that Iraq is a present threat to its neighbors or any other nation -- and thus must be invaded and subdued immediately. He showed that Saddam has sought an arsenal of mass destruction, and that his regime is still resisting disarmament. But he inadvertently made some arguments for continued inspections backed by force, rather than war.

"This effort to hide things from the inspectors is not one or two isolated events, quite the contrary," he said. "This is part and parcel of a policy of evasion and deception that goes back 12 years, a policy set at the highest levels of the Iraqi regime." No doubt true -- and yet the U.N. inspection team between 1991 and 1998 destroyed tens of thousands of tons of chemical and biological weapons, prohibited missiles and the Iraqi nuclear program in its entirety, despite Saddam's duplicity. What the inspectors are now trying to find is a small fraction of what their predecessors found and neutralized.

Powell also pointed to the documents found by inspectors in the home of an Iraqi nuclear scientist, an achievement he attributed to "intelligence they were provided." If sharing U.S. intelligence with the inspectors can locate documents in a private home, why not continue with that process?

"Tell me, answer me, are the inspectors to search the house of every government official, every Baath Party member and every scientist in the country to find the truth, to get the information they need, to satisfy the demands of our council?" the secretary demanded. They don't need to do that. Finding every scrap of paper is not the mandate of the inspectors. Locating weapons and laboratories is their job, and Powell only offered glancing indications that the U.S. has made that easier.

There was also a clue that American confidence in the data presented by Powell is not absolute. His presentation about links between Iraq and al-Qaida included a satellite photograph described as a "terrorist camp" in northern Iraq where operatives are trained in the use of poisons. "You see a picture of this camp," he said. "The network is teaching its operatives how to produce ricin and other poisons ... Those helping to run this camp are Zarqawi lieutenants operating in northern Kurdish areas outside Saddam Hussein's controlled Iraq. But Baghdad has an agent in the most senior levels of the radical organization, Ansar al-Islam, that controls this corner of Iraq."

If the United States firmly believes that its satellites have located an al-Qaida training camp in northern Iraq, why haven't our bombers, jets and missiles destroyed it already? On the ground, northern Iraq is friendly Kurdish territory, and the U.S. and its allies control the airspace.

Nothing Powell said proved that war is necessary now. He didn't justify the potential deaths of thousands of people and the unforeseeable dangers of an invasion by the U.S. and its coalition. He didn't convince the Security Council to change course in support of immediate war. What he did prove is that inspections ought to continue and intensify -- and if Iraq tries to frustrate them as the regime did in 1998, there will still be plenty of time for military action.

French kiss-off
France is no longer an ally of the United States, according to neocon eminence Richard Perle, who told a conference in New York yesterday that other friends in Europe "must develop a strategy to contain our erstwhile ally or we will not be talking about a NATO alliance." Insofar as Perle sometimes plays "bad cop" for the Bush White House as chairman of the Pentagon's Defense Policy Board, his remarks suggest a bullying approach that is growing worse as they move closer to war. (Several days ago on Fox News, Perle accused the French government of pursuing an Iraq policy controlled solely by oil interests.)

At the New York event Perle also suggested that the United States should never again consult the U.N. Security Council on a matter of important policy. Such is Bush-Cheney-Rumsfeld policy at its worst: provoke America's oldest friends, bluster about dumping the U.N. when we don't get our way immediately, and dismantle the most important military alliance in the world in a fit of pique. It sounds eerily like the John Birch Society, circa 1962.

Perle's hostility to France is nothing new, but it made me recall today that he owns a very nice little house in the south of France. It's near the town of Gordes in the Luberon. I know because I went to a New Year's Day party at that house two years ago (he wasn't there). Maybe he's sold his share of it.

For your regular Joe, bookmark this link. To send an e-mail, click here.