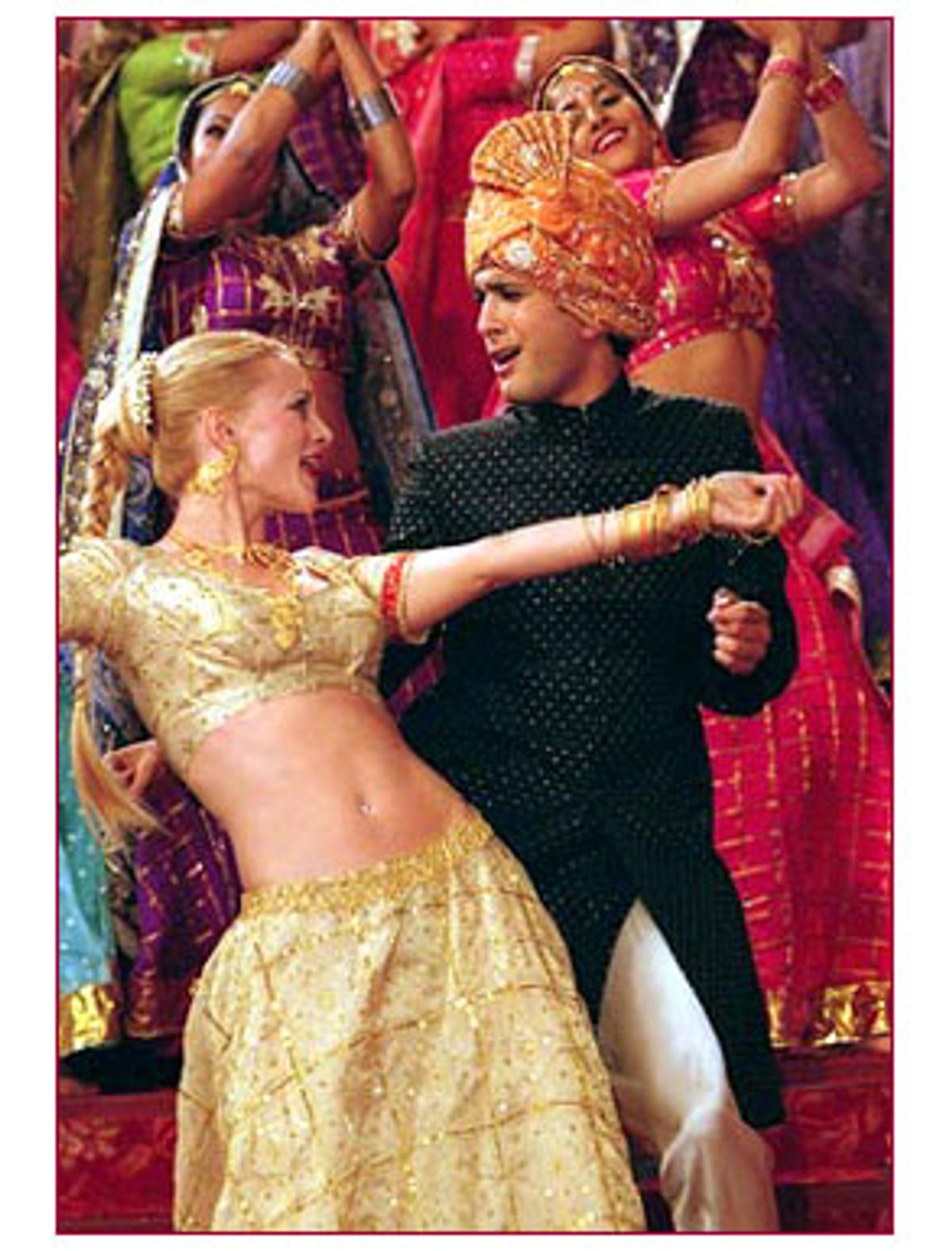 "The Guru" kicks off with a neat joke about cultural cross-pollination and burbles along with an infectious, agreeably silly sweetness. In a Bombay movie theater, a little boy watches bored as a typically colorful Bollywood musical unfurls on the screen before him. Having had his fill, he mooches out of the theater and into another auditorium and it's what he sees there that delights him: Olivia Newton-John and John Travolta in a dubbed version of "Grease" with "You're the One That I Want" coming out of their mouths in Hindi.

Flash-forward 15 or so years and the boy Ramu (Jimi Mistry) is grown and teaching the Macarena to middle-aged women in saris. Determined to take his own advice to "follow the beat of your heart," Ramu departs for New York City to become a star. His parents warn him that he'll end up a waiter or a cab driver and at least one of those predictions comes true. But he's so starry-eyed that it doesn't faze him.

"The Guru" doesn't quite sustain the pleasure of the comic surprises that keep you laughing in the movie's opening section. The director, Daisy von Scherler Mayer, settles into a fairly smooth comic groove and she doesn't find a sense of escalating madness to work with Tracey Jackson's charming script. The laughs, which start out as uproarious, quickly become chuckles.

Pacing, though, can be learned. What can't be faked, and what von Scherler Mayer has, is a feel for the ditzy moonbeam spirit of screwball comedy. I'm not saying that "The Guru" is up to the best of '30s comedy, but it shares with those movies an amused respect for the cracked daydreams of its characters. And von Scherler Mayer loves eccentrics. The character actors we remember best from '30s comedy -- Eric Blore, Franklin Pangborn, Edward Everett Horton, Eugene Palette -- seemed to beam in from their own separate universe. "The Guru" is seeded with second bananas -- including Christine Baranski as Tomei's rich-bitch mom and Michael McKean as a seen-it-all porno director -- who get on that alternate-reality wavelength.

I wish that Tracey Jackson's script did more for the two female leads. They're both fine, but they're missing the manic element that would push their performances over the top. The movie has a great idea in linking Sharonna's new-agey pronouncements about sex with her hot-to-trot side, and it lets Graham down when the character has to admit that all her wisdom was only coping devices to get herself through the humiliation of doing porn. That's the movie's one moralistic sop. If she had really believed what she was saying, Sharonna might have had some of the cracked sincerity of a Carole Lombard kook.

Marisa Tomei has some genuine zaniness. She's a spoiled rich kid seeking enlightenment, and she's swallowed every bit of mystical gobbledygook that's ever come her way. Her Lexi is the type of gal whose idea of mood music is the Guatemalan Boy's Choir. It's been great to see Tomei detouring from the mainstream roles that threatened to turn her into America's sweetheart after "My Cousin Vinny" (would that Sandra Bullock had Tomei's sense of adventure). She still seems more of an untapped resource, though, and "The Guru" hints at what might bloom if some director tapped fully into her gift for nut-brain comedy.

Luckily, von Scherler Mayer has a charming lead in Jimi Mistry (who can be seen in David Kane's neglected comedy "Born Romantic," which is available on DVD). He may be a bit recessive at times, but he's got a winning presence and he gives Ramu's star-struck focus on making it big just the right touch. Ramu is a fool but he's no idiot. Mistry is the perfect lead for what Jackson and von Scherler Mayer are doing here -- essentially a mistaken identity comedy that takes off from the musical comedy convention of the dreamer who wants to make it big in the big city. Except this dreamer is from Bombay instead of some hayseed town.

At its best, as when von Scherler Mayer blends Bollywood-style musical numbers into the action, "The Guru" seems completely in thrall to Ramu's gentle willfulness, while also being able to poke gentle fun at it. "The Guru" is one of the nicest surprises in the annual dead-of-winter movie drought, making some of the more highly touted comedies that are out now look like con jobs by comparison. A comedy that manages to be consistently funny without putting anyone down is too rare to ignore.