President Bush says his proposal to fund fuel cell research will clean up our air and reduce dependence on foreign oil -- in the future. But right now, he's doing nothing. 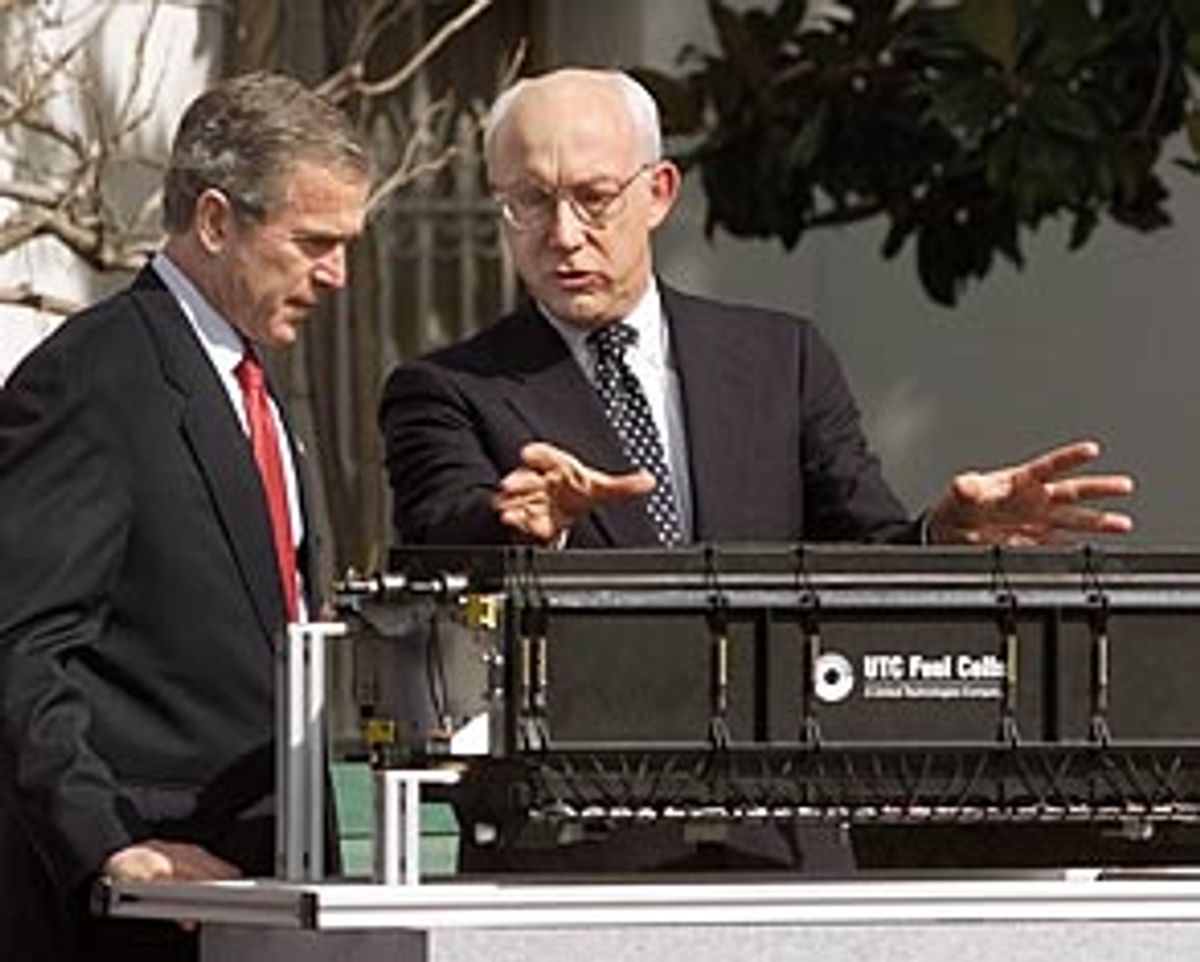 To reduce U.S. dependency on foreign oil, what would President Bush drive?

No, not an 18-wheeler right across the pristine tundra of the Arctic National Wildlife Refuge in a personal quest to extract oil from American soil. If we judge him by his own words, Bush would drive a hydrogen-powered fuel-cell wonder car, emitting only water from the tailpipe.

Last week in his State of the Union address, Bush proposed $1.2 billion in funding for a new Freedom Fuel initiative so that "America can lead the world in developing clean, hydrogen-powered automobiles." He asked Americans to join him "in this important innovation to make our air significantly cleaner, and our country much less dependent on foreign sources of energy."

Never mind that Japanese automakers have already delivered the futuristic fuel-cell vehicles, which use hydrogen to generate electricity for power. In December 2002, Toyota and Honda became the first automakers to bring hydrogen vehicles to the U.S. market, leasing them to the University of California and the city of Los Angeles. Meanwhile, American automakers are still back in the garage with their prototypes.

So forget about that leading-the-world part. More to the point, in his speech Bush neatly sidestepped the growing green hybrid vs. gas-guzzling SUV debate -- at least rhetorically. Who could nitpick against such forward-looking leadership? The auto industry loves the federal handout, and environmentalists have a hard time naysaying any plan that encourages hydrogen, since they heartily endorse the technology too.

But pledging allegiance to a technology that is, by the most optimistic auto-industry estimates, at least a decade away from being widely available, is more an exercise in masterly misdirection than leadership. The program itself is a continuation of a plan that President Clinton launched 10 years ago, but which still hasn't produced a single ready-for-the-road vehicle from American auto companies. And while $1.2 billion sounds like a lot, doled out over five years it's hardly enough to jump-start a hydrogen revolution. What the initiative does do, however, is provide political cover for an administration that refuses to take action now to improve fuel economy and decrease foreign oil dependence.

President Bush's dream car would emit only water, but that doesn't mean that it would be 100 percent greenhouse-gas and pollution free.

In a hydrogen fuel-cell car, hydrogen and oxygen are used to generate electricity and water. So, a hydrogen-powered car is actually running on the electricity generated in the mini-power plant inside it.

But while hydrogen is one of the most abundant elements on earth, it's rarely found alone in nature. And it takes energy to separate it from those other elements. Right now, hydrogen is most often derived from a process that requires the burning of fossil fuels.

Even so, supporters of research into a "hydrogen economy," such as the California Fuel Cell Partnership, maintain that hydrogen will still be "at least 50 percent more efficient" than conventional internal combustion energy.

And part of the Freedom Fuel initiative could include research into greener ways of deriving hydrogen, such as using renewable energy for electrolysis -- the separation of water into hydrogen and oxygen. But at the moment, the mining, oil and gas industries are still necessary for the production of hydrogen, so Bush isn't risking any political capital from his supporters by endorsing the technology.

The Freedom Fuel initiative is a supplement to last year's "FreedomCAR" program, which, in turn, is a successor to Clinton's Partnership for a New Generation of Vehicles, launched in 1993. Between FreedomCAR and Freedom Fuel, Bush has proposed spending $1.7 billion pursuing hydrogen fuel-cell alternatives over the next five years.

But to actually move the economy to a hydrogen base would be a massive undertaking. It isn't just a question of making a safe, clean car that performs as smoothly as a gas-powered one. Getting hydrogen fuel to consumers will be a huge infrastructural problem. And there's some doubt as to whether $1.7 billion is enough to make a dent.

"It's better than nothing, but it's also kind of a drop in the bucket," says Mark Bunger, senior auto-industry analyst for Forrester Research. "The number -- $1.2 billion -- that's about what it would cost an automaker to develop one new car, like a Ford Taurus. This is not such a shot in the arm that it's going to hurtle the Americans ahead of the Japanese."

"It's definitely not enough money," says David Friedman, a senior analyst at the Union of Concerned Scientists. "If the government was really serious about getting hydrogen out there as soon as possible, there would be at least another zero, if not two zeroes, at the end of their figure."

"There's no guarantee that we're going to see fuel-cell vehicles out of this," says Brendan Bell, a spokesperson for the Sierra Club. "We would love this plan if there was a timeline for concrete results we could see, not just a blanket R&D tax subsidy."

That's not just a typical environmentalist's stab at Bush. The Clinton-era Partnership began with the goal of tripling the fuel economy of a family car, getting to an 80-miles-per-gallon prototype within a decade. Experimenting with diesel hybrids and early fuel cells, "they got two 70-mpg prototypes," said Friedman. But it's been a decade, and there's still no American hybrid on the road.

In the meantime, Toyota and Honda have brought hybrids such as the Toyota Prius and Honda Civic Hybrid to the mass market, as well as manufactured the first fuel-cell vehicles.

The frustrating part for many critics worried about global warming, foreign oil dependence and a host of environmental issues affected by fossil fuel resource extraction is that there are plenty of things Bush could do now that would make an impact. These critics see Freedom Fuel as a relatively modest fiscal commitment to a technology that isn't going to be here anytime soon, while the many steps that could be taken to improve the fuel efficiency of cars today with already existing technologies, at no cost to the government, are ignored.

"We share the president's vision of a hydrogen future, but energy security and oil dependence is a problem today," says Michelle Robinson, a senior analyst at the Union of Concerned Scientists, a group currently leading a campaign to petition the Bush administration to raise fuel economy standards higher than the modest increases recently announced.

The Sierra Club has its own Freedom Package of options consumers can request for technologies that exist now to make cars more fuel efficient, such as "continuously variable automatic transmissions" and "integrated 'idle-off' starter-generators." A significant rise in fuel economy standards could also push in the same direction, but that's not the current administration's approach.

Bush even couched his Freedom Fuel proposal as a reaction against regulation: "In this century, the greatest environmental progress will come about not through endless lawsuits or command-and-control regulations, but through technology and innovation," he declared. That's a backhanded jab at the likes of California, which for more than a decade has tried to mandate greener cars through its Zero Emission Vehicle program. The Bush administration has sided with automakers challenging California's laws in federal court.

Drivers of the most fuel-efficient cars on the road today -- electric cars and hybrid vehicles -- are skeptical that the president is really pulling for cleaner cars. Chris Yoder, 40, a Pasadena, Calif., Prius driver, who previously drove a now-discontinued EV1 electric car, goes so far as to refer to fuel cells as "fool cells."

In his view, promises of a hydrogen future are just an excuse for marketing more gas guzzlers today. "It's yet another dodge by the auto companies to not produce clean, efficient vehicles," says Yoder.