Ken Kalfus' first novel explores how untruths spread throughout the Soviet Union -- and the human heart. 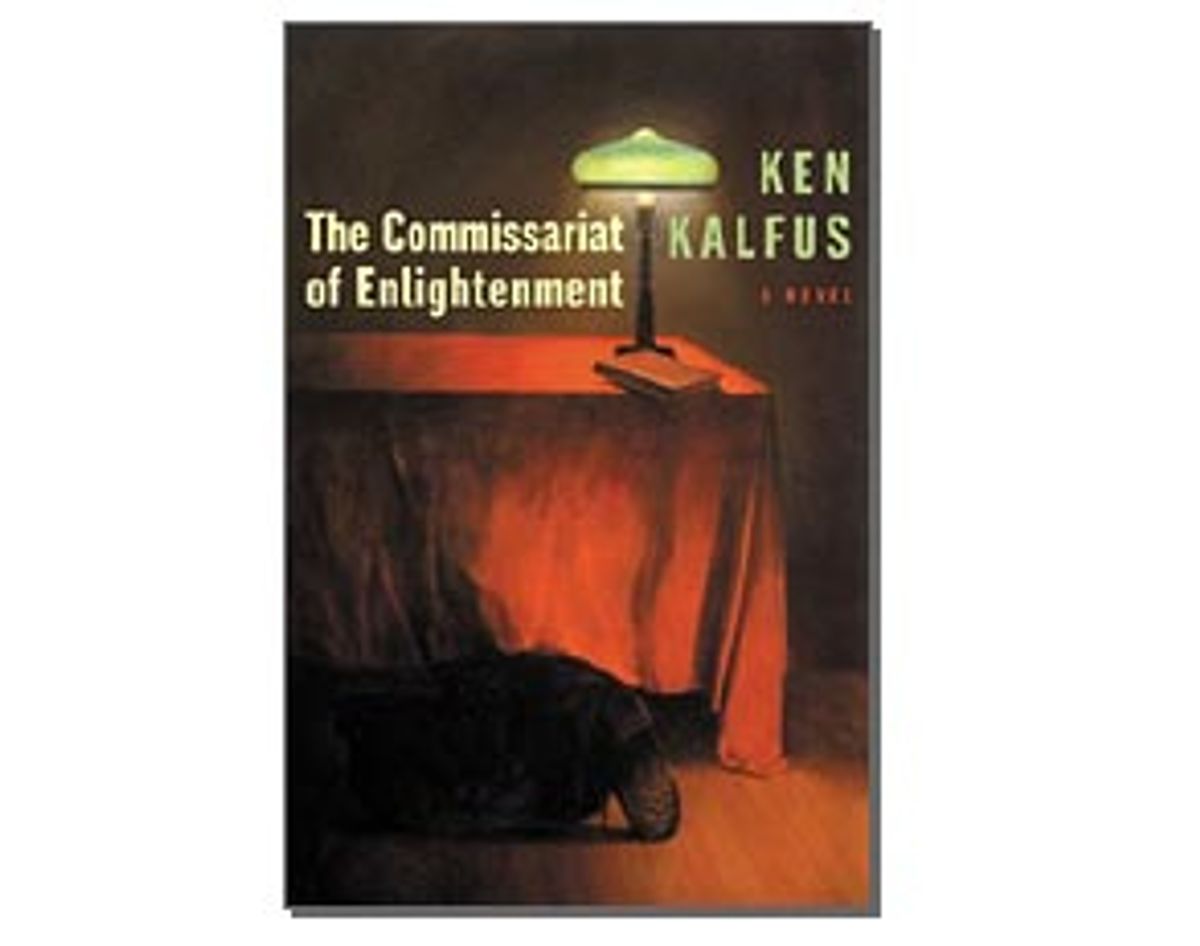 The old Soviet Union now seems so dated in every way -- ideology, art, political structure -- that if it were not for the horrors perpetrated by that state, it would look like a lame joke, all "girl meets tractor" plays and visions of a worker's paradise so dull no one would want to live in it even if it actually existed. But Ken Kalfus' first novel, "The Commissariat of Enlightenment," picks out a series of moments in 20th century Russian history that have their counterparts in the West. It's the story of the birth and the triumph of the radically unreal. And while the Soviet Union's lies aren't the same as our own, in Kalfus' view the way a certain species of lie gets told, gets spread and ultimately becomes something more powerful than the truth is the same everywhere.

"The Commissariat of Enlightenment" begins with a media circus, the ur-media circus, at least for a country that one character, a British journalist, describes as "this impossible empire," with "its limitless, valueless steppes; its inaccessible forests; its untappable mineral veins; its teeming, unfished rivers; its lazy and superstitious natives -- this hyperborean Congo." The year is 1910, and the journalist sits on a train rattling toward Astopovo, an obscure rural town where the 82-year-old Count Leo Tolstoy lies dying in the stationmaster's house. The count (the characters refer to him exclusively by his title) is a popular saint, revered beyond the borders of Russia and even by the nation's illiterate multitudes. The press has pitched a circus tent outside the house where the count is sequestered, telegraphing regular updates to their newspapers, awaiting the arrival of the countess (whom the count was fleeing when he was taken ill) and patronizing the local taverns and prostitutes.

Among them is young Nikolai Gribshin, a cinematographer for Pathé Frères, the pioneering French film company. Beside his skill with a camera, Gribshin has one other aptitude, an unerring ability to recognize the future. He is transfixed by an eccentric doctor, one among the many fanatics and pilgrims drawn to the scene, who is touting a new method of achieving "life-in-death, the perfect preservation of the qualities of the vital force in a dead animal" -- i.e., embalming. He is hoping to embalm Tolstoy's corpse, to "guarantee his immortal fame." Both Gribshin and the doctor catch the shrewd attention of a man who drifts through the crowd, noticing everything. He is a "revolutionist," always on the lookout for anything he might make use of someday. His name is Stalin.

"The Commissariat of Enlightenment" is Gribshin's story, from his days at the rural train stop, through the revolution -- after he has taken the name Astapov in honor of the place where his life was galvanized -- to his years as a Commissar of Enlightenment, the department of Stalin's government devoted to propaganda. But this novel is just as much the story of powerful ideas and how they change when they collide with each other. In one early scene, Lenin is hiding out in a farmhouse and when Stalin comes to the door, the Hegelian password is "Thesis!"; the countersign, "Antithesis!" and the counter-countersign, "Synthesis!" That's precisely the arc traveled by Kalfus' novel and, in it, the art and craft of film.

The thesis is Russia, as the British journalist characterizes it: vast, inert, mired in ignorance and stubbornly devoted to its religion, a primitive faith embodied in icons. It is a land of peasants, "frozen in time, leaning away from their carts, against the direction of history." Gribshin has learned to be skeptical about reform after a boyhood spent roaming the countryside with his schoolteacher father. "You couldn't teach these people to read and expect to 'elevate' them," he concludes. "You had to make new people, a far more complicated task." What finally persuades him to believe in the possibility of making new people is a technology: the cinema.

Moving pictures are the antithesis of the past, to Gribshin's mind. Working for Pathé, he grows to see that "History was no longer a story about the past. It was now. History had crystallized into a single point, a geographical and temporal nexus at the end of a smoke-and-dust-filled shaft of electric light." When the doctor accuses him of dabbling in "another beer hall entertainment," he protests: "Cinematography remains the most promising tool for public education." The doctor, not coincidentally, argues that embalming "promotes universal education in a way undreamed of merely five years ago!" It's part of the tenor of their time to talk about revolution as if it were more than just a turn of the wheel leaving you just about where you started. The masses will be taught, and transformed.

It takes Stalin to recognize the similarities between these two technological innovations and their synthesis with Russia's deep, immanent darkness. "You are also involved in an enterprise dedicated to preserving the appearance of life," he observes to Gribshin. Embroiled in an argument with Lenin about religion and what use the revolution might make of both it and the dying count, Stalin says, "witness the passions stirred by the Count's presence -- the idea, the symbol of the Count -- you'll understand that the masses need something to worship. They love the Count, much more than they love the ideas and symbols of revolutionary socialism ... But it can be shown ... that our movement is a development and modernization of the Count's teachings. We may derive our moral authority from the Count." "We derive our moral authority from the scientific study of history!" Lenin retorts.

What the historical moment calls for, as Gribshin/Astapov sees it, is a pitched battle between the light of science and the murkiness of Russia's past. Tolstoy himself embodies the struggle -- a man "disgusted by the sex act, regardless of its purpose or the state of affairs between the man and the woman" who nevertheless fathered 13 legitimate children and uncounted illegitimate ones; a man who deplored organized religion but was regarded as a saint; "a landed aristocrat, with thousands of peasants working on his estates" who "believed it was wrong to live off another man's labor." In a terrific set piece from the book's second section, Astapov tries to free a group of villagers from the thrall of their local church by bringing in a row of movie lamps to flood the church's mystic shadows with electric light (something they've never seen): "The light deeply soaked the room now, revealing its secret places -- cobwebbed corners, ratholes. Ancient patches of cement glistened in the stonework. The place was filthy. In steps, the church was becoming as mysterious and hallowed as an old barn."

But when Astapov forces open a sarcophagus to demonstrate that the local saint's body has not, as reputed, remained in a miraculously uncorrupted state, the human capacity for irrationality thwarts him. His solution, though shocking, shouldn't be surprising. It's pure Stalin.

The Stalin we see in "The Commissariat of Enlightenment," however, is mostly the trickster politician, not the brute. That doesn't make him any less frightening, though, for Stalin is the one who first grasps that the power of the cinema lies not in its capacity to record the truth, but in its ability to "assemble facts into something useful ... all sorts of facts: picture-facts, word-facts, half-facts, former facts, future facts, unfacts, facts to be drawn from the ether ... Facts that are not facts -- that are, in fact, lies -- until they're in the service of the revolution." He uses technology to create not new kinds of people, but new kinds of icons; he assumes the people's hunger for them can't and perhaps shouldn't be eradicated. The book ends with a gruesome scene worthy of an old "Tales From the Crypt" comic, describing the creation of the Soviet Union's most potent crypto-religious relic.

Kalfus, a writer of chameleonic fluency, adopts a worldly, seasoned tone throughout. It's a sometimes eerie mimicry of the voice of classic Russian novels, weary cultivation shot through with hectic flashes of doomy exuberance. This is a far cry from how the perplexities of image culture usually get explored in fiction -- no jitters, no brand names, no chic numbness. Yet it feels deeper and more true that the usual DeLillo-esque exercise; Kalfus doesn't just observe that contemporary life is dissolving into a field of flickering, substanceless projections, he asks what it is about human nature that makes us so susceptible to such mirages. And suddenly the shadow world of Soviet Russia doesn't seem so far away after all.