A mean-spirited romantic comedy turns nice -- just when it should get nasty. 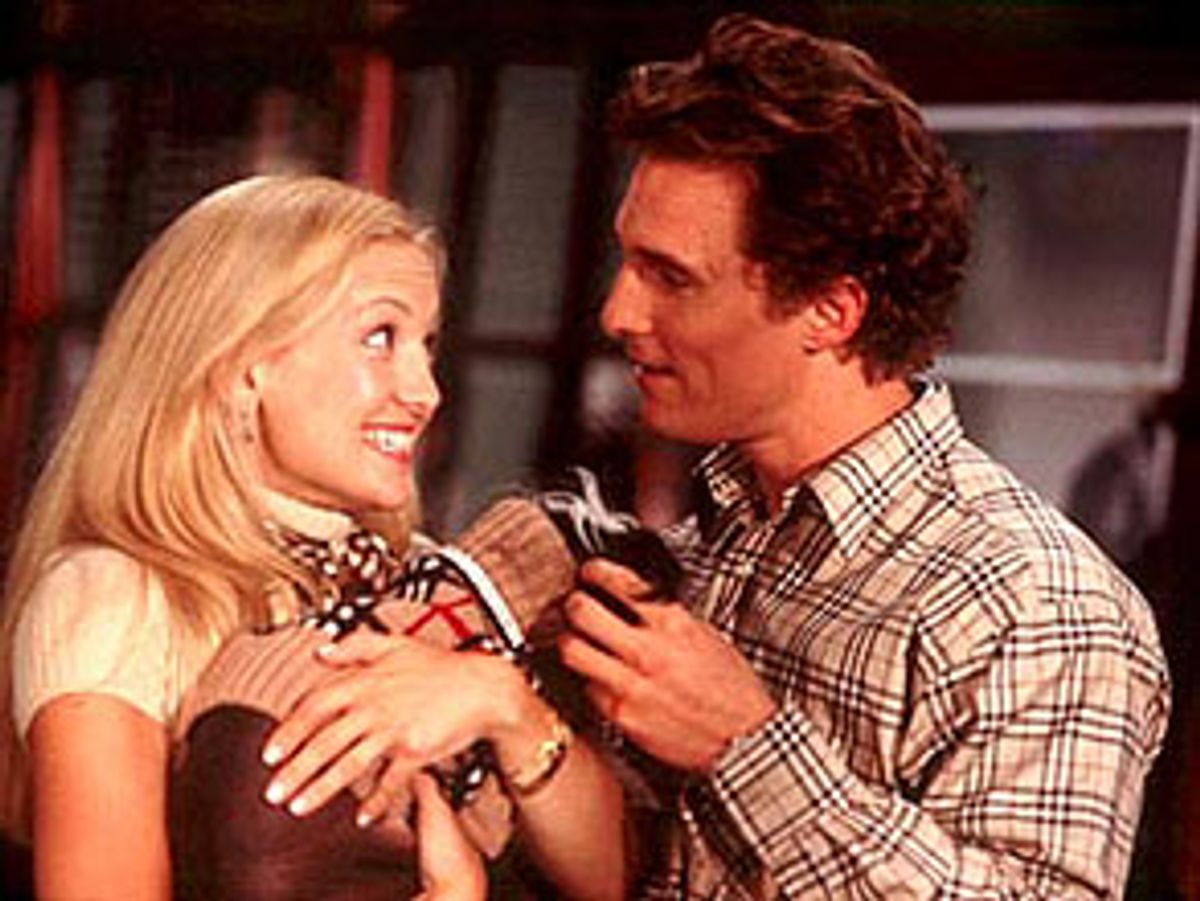 Would mainstream contemporary romantic comedies be better if they were nastier? That's a question "How to Lose a Guy in 10 Days" raises just briefly, only to let it drop as if it were too much for ticket-buying audiences to handle. Romantic comedies are designed to make people feel good, but they don't have to be sterile -- the best ones are often somewhat messy and complicated. The idea behind "How to Lose a Guy" is beguiling precisely because it gives free rein to hugely unflattering human behavior. In the movie's setup both the man and the woman are playing one another from the start. It doesn't have to manufacture little cruelties for these lovers to inflict on each other; the characters are doing a good enough job of that themselves. They're eventually set right, but before that happens, seeing their conniving little mating dance on-screen is cathartic precisely because we know better than to try this sort of thing at home.

There's a pleasantly malevolent ridiculousness hovering around "How to Lose a Guy." But the movie would have been so much better if it had jumped into its mean-spiritedness with gusto and passion, instead of just splashing around in it halfheartedly. "How to Lose a Guy" is frustrating because there are so many ways in which it almost works. Its premise is clever: Andie (Kate Hudson) is a columnist for a hot New York women's magazine (her specialty is cutesy how-to articles like "How to Talk Your Way out of a Parking Ticket"). Her dragon-lady editor, Lana (played by the exquisitely sharp Bebe Neuwirth, who doesn't get nearly enough screen time), has barked a particularly devilish assignment at her: To show all the things that women do to sabotage new relationships, Andie is to go out and find a guy, make him fall for her, and then proceed to drive him away with a series of maddening girly tactics. (I won't give all the good ones away, but I will tell you that they include filling the guy's medicine cabinet with Vagisil and other peculiarly feminine delights, adding homey touches, like a frilly pink bedspread, to his bat cave, and buying him a "love fern" to mark the beginning of a desperately auspicious relationship.)

But the twist is that the unwitting target is out to do a con on Andie as well. Ben (Matthew McConaughey) is an advertising hotshot hoping to wrest a big account from two wily co-workers (played like hungry kitty-cats by Michael Michele and Shalom Harlow), and he makes a wager with them: Despite his rep as a playboy, he bets he can get any woman to fall madly in love with him in time to accompany him to a big client wingding the following week. The ad vixens pick Andie as Ben's mark, and he goes to work on her, even as she's going to work on him.

That means Andie does everything in her power to drive Ben away, including sending him out for a diet Coke at the most exciting moment of a Knicks game, while Ben does everything in his power to make her love him, even though she's driving him crazy. Hudson and McConaughey both rise to the bait valiantly: There's something a little maniacal about the way Andie, dressed in a '50s housewife sundress, flounces into Ben's apartment during his poker night, replacing the beer and pizza sprawled all over the table with her delicate little cucumber sandwiches. McConaughey has a great moment when he realizes Andie has filled his medicine cabinet with girly products: The scene is played broadly, like a horror movie cliché, but McConaughey makes it work by showing us just how close he is to blowing a gasket -- and then pulling himself together at the last minute. Ben and Andie seem a little crazy without being lovably neurotic, and because we don't have to approve of them, we're free to simply enjoy them.

But "How to Lose a Guy in 10 Days" goes soft right when it needs to be sharpest. The screenplay, by Burr Steers ("Igby Goes Down"), Kristen Buckley and Brian Regan (based on a book by Michelle Alexander and Jeannie Long), has its moments: In some places the jokes click together nicely, with the satisfying snap of Legos, but in others they sprawl too loosely. But that's not the worst of it. When Andie starts to really fall for Ben, director Donald Petrie ("Miss Congeniality," "Mystic Pizza") lets things go all gooey, instead of riffing on the vaguely thrilling undertones of treachery and deviousness he'd set up in the couple's early scenes together. Andie visits Ben's staunchly middle-class family in Staten Island and practically swoons over their little-people folksiness (remember, she's a hotshot Manhattan magazine type, and people who wear short-sleeved sport shirts and mesh tractor caps are a novelty to her). Then we see Ben and Andie zipping along on Ben's motorcycle, the friction between them momentarily dissolved, and suddenly they have become indescribably boring.

Where are those two wicked people we have come to know and might even, in a different movie, have come to love? They never quite come back to us, and the movie's climax, when Andie and Ben find out the truth, is messy and unfocused when it really needs to twist the knife -- it should makes us laugh in spite of ourselves. The pleasure of "How to Lose a Guy" should have been that of seeing how these two people, who came together for the coarsest, meanest, shallowest reasons imaginable, ended up a match made in heaven. As it is, they're a match made at the box office, which isn't even a close second. "Nice" always sells, but cruelty, especially in the name of love, is infinitely more interesting. "How to Lose a Guy in 10 Days" takes the safer route, working overtime to send everyone home happy and smiling and bursting with goodwill. Sometimes it's cruel to be so kind.