Jackie Chan, Owen Wilson, Sherlock Holmes and Jack the Ripper ride the Magic Bus in this daffy, delightful voyage to swinging London, circa 1890. 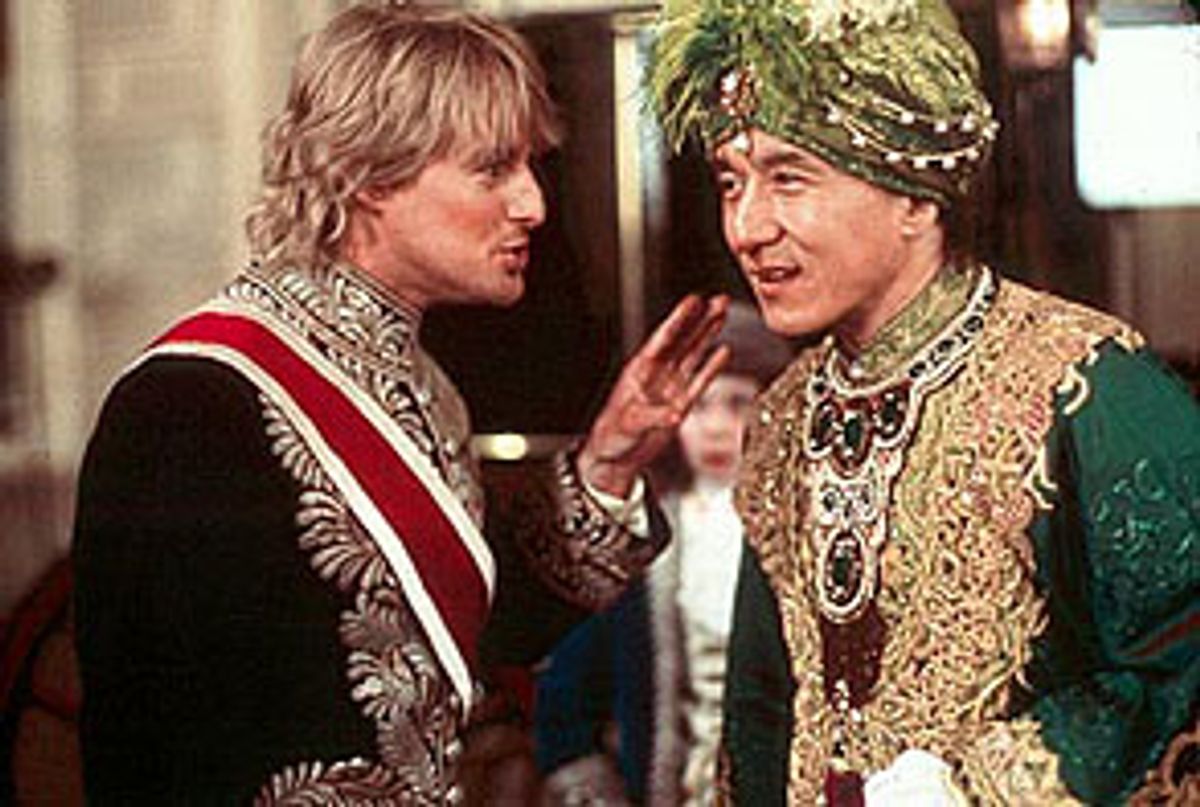 There wasn't a minute of "Shanghai Knights" that didn't have me grinning. Lurking around the edges of this sequel to the 2000 Western comedy "Shanghai Noon," set mostly in London during Queen Victoria's golden jubilee, you can find Jack the Ripper, the origin of Sherlock Holmes, and even a dash of "Oliver Twist." There are anachronistic references to the Beatles and Charlie Chaplin, along with '60s rock songs on the soundtrack. Escaping from one of their numerous tights spots, Jackie Chan and Owen Wilson dash to freedom in a newfangled auto-mo-bile, to the accompaniment of the Who's "Magic Bus."

It's a fantasy of London culled from history and literature and pop culture, all our Anglophile fantasies mushrooming in one place like a daydream run amok. I'd venture to guess that most Americans visiting London for the first time hope, somewhere in the back of their minds, to see Dickensian urchins roaming market stalls or John, Paul, George and Ringo running down the street. So the collision of eras in "Shanghai Knights" all makes a weird kind of sense. Since you can do anything in the movies, there's no good reason why the sights of Victorian London shouldn't be unveiled to us to the tune of Roger Miller's "England Swings."

What's cheering about "Shanghai Knights" is that the people who made it realize that, by itself, that kind of cleverness isn't enough. The director, David Dobkin, and the writers, Alfred Gough and Miles Millar, work here with care, affection and a blessedly light touch. They aren't out to deliver the goods in the crassest possible manner, or turn the movie into an action-comedy bash. "Shanghai Knights" is a cunning mixture of the calculated and the offhand. It's thoroughly commercial but made without a trace of cynicism. Seeing that sort of mainstream movie can give you a lift; it can, for a while at least, wash you clean of feeling jaded.

The press material for "Shanghai Knights" quotes producer Roger Birnbaum as saying that, together, Jackie Chan and Owen Wilson achieve something like the casual, shaggy-dog laughs of the Hope-Crosby "Road" pictures. That's not just a producer blowing smoke. There's enough of a plot here to provide a framework for the fights and stunts and gags, but not one complicated enough to get in the way of the stars. Dobkin (whose only previous feature was 1998's "Clay Pigeons") brings just the right degree of precision and clarity to the action sequences. It always feels like a minor miracle to watch action scenes that haven't been edited through a Cuisinart into incoherence; thanks are due for that to editor Malcolm Campbell.

Cinematographer Adrian Biddle and production designer Allan Cameron give the movie a nice storybook sumptuousness without ever making it feel fussy or slaved over. When we see Jackie (I can't call him "Chan") standing at the deck of a ship steaming toward England, the shot serves no purpose except to allow the churning ocean to fill the Panavision frame. A later digitally composed shot gives us an airborne view of 19th century London. When the two heroes are dangling from the hands of Big Ben, you can take time to admire the beauty of the composition of nighttime London spread out beneath them. All these shots, none held longer than they should be, provide one of the most luxurious indulgences the movies have to offer: postcard views of picturesque places.

That isn't even the oldest trick that "Shanghai Knights" has up its sleeve. The movie keeps pulling the hoariest bits: fireplaces that swivel around so characters disappear from rooms, portraits with hollowed-out eyes used for peepholes, secret passages, even the wax museum routine where characters freeze pretending to be mannequins. When the leads tussle with New York's finest, the lawmen are, inevitably, dressed like the Keystone Kops. It's not fresh, but it's all executed with such briskness and unfailing good humor that you laugh at the daring of using such ancient routines. The people on-screen -- and the people behind the camera -- always act as if they're doing something really spiffy.

This installment of the adventures of Jackie's Chon Wang -- say the name out loud a few times and you'll get the joke of using it for a Chinese Western hero -- and Wilson's Roy O'Bannon finds the two of them in London hunting down the enemies of the Chinese emperor, who have stolen the Imperial Seal. They're aided this time by Chon's sister, Lin (Fann Wong, a mighty mite with a prankish sense of comedy), and Artie (the amusingly gangling Thomas Fisher), a Scotland Yard inspector who harbors the brain of a supersleuth in the body of a P.G. Wodehouse ass. They're up against the emperor's archenemy (Donnie Yen, the type you can tell is a baddie just by the sheen of his brilliantined hair) and an evil fop of an English lord named Rathbone (a nod to Basil Rathbone, played by Aiden Gillen) with whom he's in cahoots.

"Shanghai Knights" follows the duo as they go to London and confront the treacherous Rathbone, but its real focus is the interplay between Jackie and Owen Wilson, which is a constant joy. There's a neat switcheroo going on in the roles they play. Though Chon is always more agitated than Roy, Jackie is something like the movie's straight man while Wilson, who gets the silliest and funniest bits, plays it deadpan. I must have seen Wilson in nearly a dozen movies by now and I'm damned if I can pin down what it is that makes him so funny. For lack of a better phrase, you could call it oblivious sincerity. Wilson has found a way to play cluelessness with the dash of a leading man.

When the movie opens, Roy has reinvented himself in New York as the hero of Western pulp fiction; readers thrill to his tales of taking down an entire valley of zombies with just one bullet. The gold he came into at the end of "Shanghai Noon" has been frittered away, and Roy is earning what he can as a not very good waiter and as a sought-after gigolo. Is there any other actor who could play a whoring, boozing profligate with anything like the boyish charm Wilson brings to the part? The look on his face when he daydreams about a roomful of courtesans ready to satisfy his every whim is too full of delighted disbelief ("Are they all for me?") to be called lustful. He's more like a kid who's won a really nifty bike for collecting enough box tops. When presented with a roomful of London call girls, Roy's idea of fun is to instigate a pillow fight. The assurance of Roy's constant wrongheaded commentary ("Whitechapel -- that sounds like a nice neighborhood!") is hilarious in a way that seems as if Wilson just tossed off his lines. He's found a way to make foolishness sexy.

Recently one of the celeb columns ran a report that Jackie Chan has acknowledged that he's starting to use stunt doubles. It's been apparent that he's been slowing down a bit; after the years of physical punishment he's subjected himself to, how could he avoid it? He's still capable of making us marvel, and Dobkin's direction is alive to the joy of watching Jackie in action. Dobkin never uses editing to conceal any physical limitations Jackie might now have. Instead, the director nudges him gently toward physical comedy. When Jackie's not dazzling us with some bit of physical wizardry, he's always been a charming comic presence.

Here he achieves a graceful melding of action, comedy and dance. At one point when Chon is holding off a horde of attackers with a brace of umbrellas, we hear a snatch of "Singin' in the Rain" on the soundtrack. I'm not saying that what Jackie does here is equal to what Gene Kelly does in that scene. But like Kelly, Jackie Chan is all about the lyric beauty of athleticism. Jackie makes movie heroes with superpowers seem like pikers, because he doesn't need anything except his body to make the impossible look like a lark. "Watch this," he might be saying to us before he sets out to gleefully defy gravity. As the song says, he makes us smile with our hearts.

Though it's always dangerous to make predictions, it's hard to believe "Shanghai Knights" won't be a big hit. It can be frustrating, though, to persuade people who shy away from commercial movies to see one. "Discerning" filmgoers have no trouble acknowledging the artistry of film stars from the past, but there is sometimes a tendency to see contemporary stars as just trading in commercial junk. That's especially true when the stars work in disreputable genres like action or comedy. You couldn't imagine anyone denying the "artistry" of Mae West or Errol Flynn. Talking about Jackie Chan in terms of "art" might sound a little pretentious. But what he represents -- the humor and charm and the sheer physical beauty of seeing him in action -- as well as the lazy, ping-pong repartee he achieves with Wilson, is the essence of the casual, deceptively artless art of movies.

So I'd like to close this with a word to the cinema-goers (as opposed to the moviegoers) who think something like "Shanghai Knights" isn't for you. Why wait for the critical monographs and museum retrospectives that will surely follow in 20 or 30 years? Jackie Chan is here now in "Shanghai Knights" and he's a joy to behold. So is the movie.