Three days in the Valley 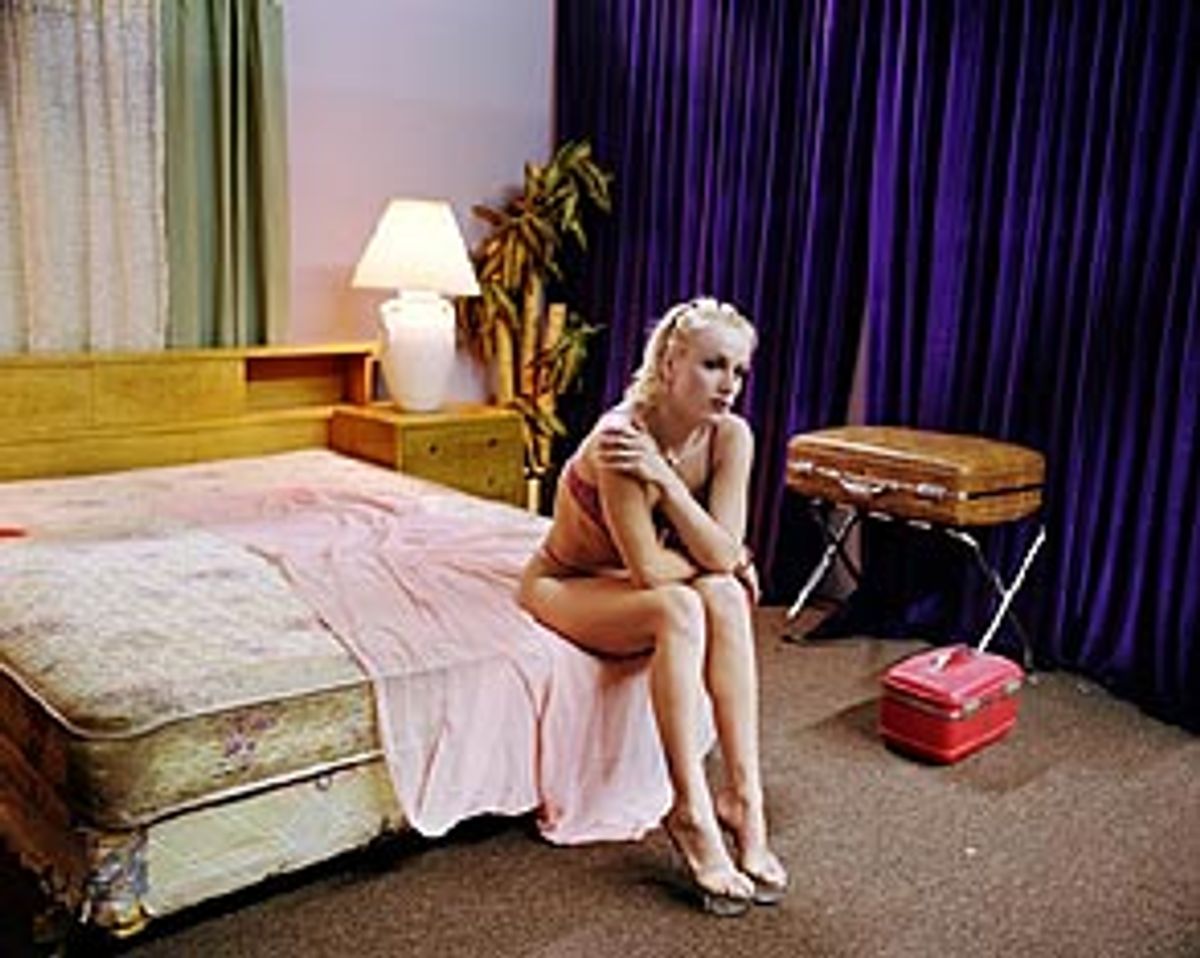 Larry Sultan has managed to mine that quotidian vein of the sex-film industry with his continuing series of on-set color photographs. They're titled "The Valley," after the sprawl of Southern California suburbia they call the San Fernando. The area exists in the psychic shadow of the Hollywood sign, the back of it, and so it's somehow fitting that this sea of subdivisions should evolve into the capital of an independent film production of the adult variety. Over time, the lived-in ranch houses and McMansions have served as locations for any number of sex scenes for Vivid, Wicked and a few other major erotic film companies.

In pictures that he's been taking since 1999, after a magazine commission to illustrate a story on adult filmmakers, Sultan captures the oddly commonplace aspects of these movie locations. After earning the trust of the directors and actors, who have felt his pictures respect them, Sultan has been a regular working guest on many an adult film set. While these seem to be ordinary locations -- bedrooms in bedroom communities -- Sultan's pictures are imbued with a sense of theatrical magic. While he rarely offers full-on views of rehearsed raunch, he piggybacks on to cinematic lighting, which results in curiously beautiful stills poised between high artifice and real life.

In "Suburban Street, West Valley Studio," he shows us what initially seems like the façades of some pristinely Spielbergian suburb, a perfection that shatters when you look to the left of the picture and notice the lighting equipment and hardware that indicate that this is merely a backdrop in a studio -- perhaps one occupying an industrial park on the outskirts of a postwar neighborhood. The balanced view, equal parts document and fantasy, is highly refreshing in art world contexts, and Sultan's photographs, which are on view through February at Stephen Wirtz Gallery in San Francisco, will be the subject of a major exhibition at the San Francisco Museum of Modern Art in 2004 as well as published in book form by Scalo. (Sultan also has increasing practice as a fashion and commercial photographer, shooting for various international Vogue editions, Details and even Kate Spade.)

It's worth noting that Sultan, who has long lived in Marin County, spent a good portion of his youth in the San Fernando Valley. He's interested in locations that have some personal connection to his own life, which relates back to his breakthrough body of work, the early 1990s series called "Pictures From Home," in which he photographed his aging parents in the golf and highball glam of their high suburban life in the valley. These Technicolor-ish quasi-candids have been highly influential in the burgeoning realm of domestic documentation. So it's fitting that the current pictures are concentrated in the somewhat iconic burgs of Tarzana, Encino, Woodland Hills, Van Nuys and Sherman Oaks. Ventura Boulevard fascinates him, as do areas above the more recently settled Granada Hills. "That edge-of the-valley area is fascinating," he says. "It represents where my parents lived."

In "Cabana," for example, he shows us a poolside tryst as seen through the thorny tangles of a rose bush. We're far more aware of the striped canopy and the two-story stucco building in the background than the patches of skin visible through the foliage.

There is a bit of "Entertainment Tonight's" "behind the scenes in Hollywood" appeal to these pictures, as they reveal and reflect the artifice of filmmaking. Yet the shiny veneer of media has been replaced with an elusive humanity that seems far too real to be presented on TV. The films, after all, are often shot in actual homes, rented out for just this purpose. "There are only maybe 50 houses used as sets, and I've been to many more than once," Sultan admits. "There are people who make a living renting out their places. Sometimes they're housewives or single mothers. You enter a house that's currently being lived in, all of their things are there. It's like you're stepping into a life that's lived. They often don't even clear off the mantelpieces or the toys in the kids' rooms."

One of Sultan's creepier images depicts a canopied bed in a little girl's room, complete with dolls positioned on the shelves. More often, though, the settings comfortably reveal real-life decorating sensibilities and the frayed edges of actual use. "West Valley #11," one of Sultan's more recent photos, is an interior focused on a deluxe wood wall with a grid of square holes, one of which frames the reclining head of a woman, perhaps in the throes of thespian ecstasy. It's the golden-hued wall, however, that dominates the composition -- along with the gallon jug of water (or is it a Costco bottle of lubricant?) and jumbo roll of paper towels.

Sultan also creates intriguing portraits of actresses and actors captured between takes. One of his best is the ebullient "Chandler Ave." (2000), in which a blond woman in tight, vibrantly blue pants and midriff-baring top reclines on a contrasting yellow vinyl couch. She's smiling playfully, her head tilted back; her upswept hair rests just below a tacky painting of a bucolic landscape. It takes a while to notice the freckles on her face and that her hand is deep in her Spandex pants in an act of self-pleasuring. It's a picture that's finely balanced between knowing and innocence, domestic interior and constructed reality.

While Sultan admits he finds it far more interesting to photograph actresses, who are the more revered, beautiful and better-paid aspects of heterosexual porn, he also has turned his eye to the actors. "Man in Garden, Mission Hills," a picture from 2000, is an exterior night shot in which a naked actor stands near a stucco and brick gate. A swath of light illuminates a sexy statue perched near the gate, as well as the subtle sheen of the condom this well-endowed stud may have just slipped into, preparing for a take. Cases and camera bags are piled near him, at the base of a tree, identifying this as a real working environment, one infused with its own sense of mood, drama and important, not-so-little details.

It is, however, the women who pervade, and Sultan says that in some inexplicable way he identifies with their acts of self-transformation. In "Sharon Wild," from 2001, the sinewy blond actress sits on the edge of an unmade bed, the corners of which look to have been clawed to tatters by a house cat. In the background, a couple of suitcases suggest a sense of traveling showmanship. Wild has a dazed, slightly forlorn look in her eyes, and her exaggerated platform shoes have a way of making her calves look rather shapely.

The actress's hard-to-read expression is one that may bring to mind the exploitation of women in the business, but Sultan steers away from such readings. "I cannot operate with judgment," he says. "I won't photograph when it's an ugly situation; I've been sickened by certain productions and the way people are treated. I prefer to work with directors and sets where there's a sense of family."

Therein, in the sense of personal connection, lies one key to the success of Sultan's photographs. "I get to stand in people's backyards where I grew up, to be able to be inside of them, to wander around without getting arrested," he says with a laugh. "I'm trying to find an opening, something that delights me in these settings. At its best, it's like going home."