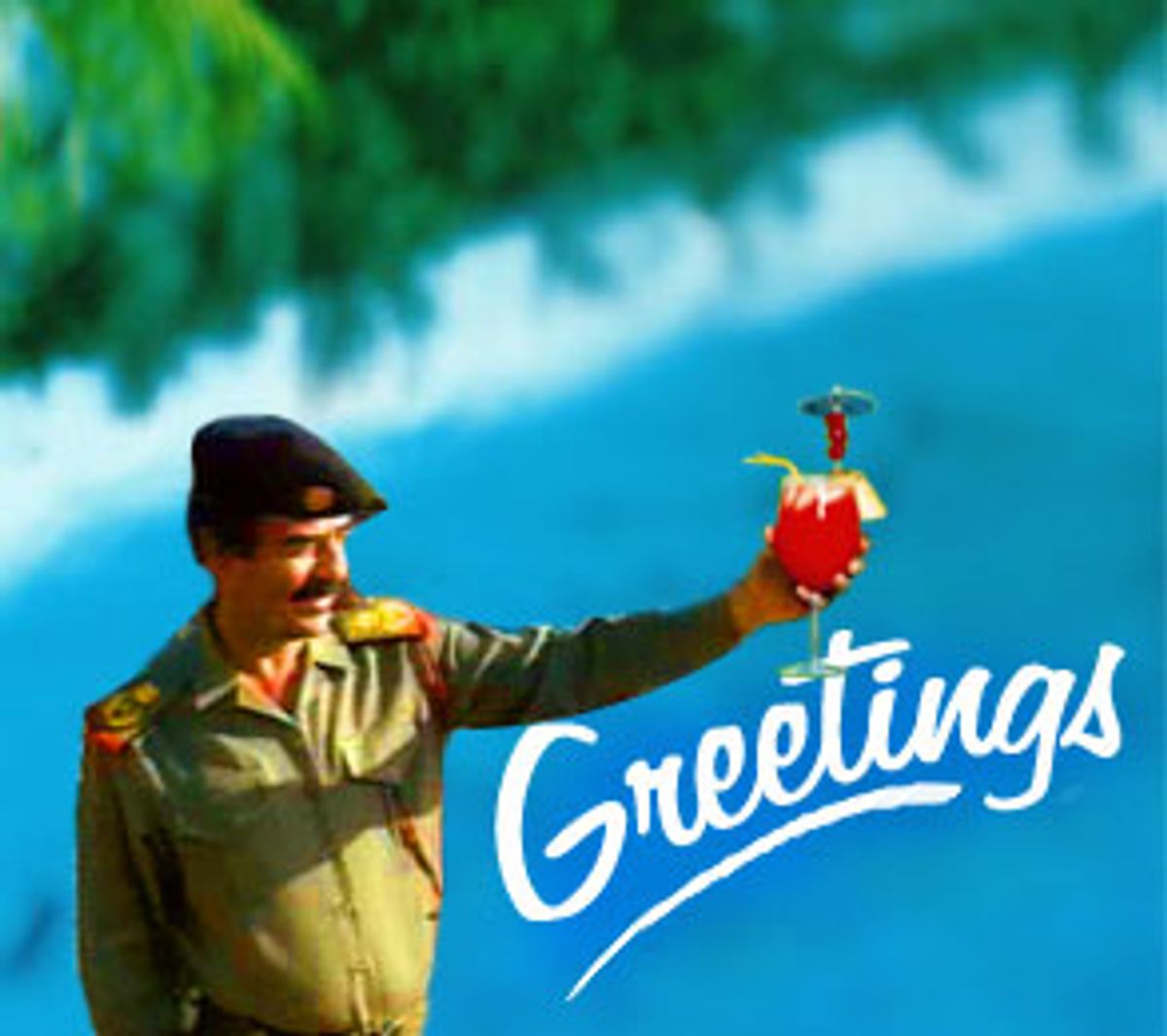 Reports out of Atlantic City, N.J., confirm that agreement had been reached for Saddam to take a position as a greeter at the Trump Casino, but a New Jersey Gaming Commission background check turned up several hundred unpaid Baghdad parking tickets, barring him from employment.

Meanwhile, the Augusta National Country Club, in Augusta, Ga., has refused his application for residency in one of its secluded private bungalows. "We were blown away by his responses to our questions about women, crowd discipline and firm leadership," says the head of the Membership Committee, "but Saddam appeared for his interview in military fatigues, sans regulation necktie, and he declined to remove his facial hair, which was a deal breaker for us."

Yet the wily Mideast mischief-maker won't lack for choices, should he accept exile over annihilation. The Greater St. Helena Island Tourist Council, for example, has invited Saddam to "open a second chapter in our legend as the last stop for tyrants" and take up residence on the same windswept spit of mid-Atlantic rock where Napoleon Bonaparte spent his last years. Sweetening the deal is St. Helena's offer of a no-questions-asked explosions policy and a firearms waiver.

Bikini Atoll in the South Pacific, uninhabited since the last A-bomb test there in 1947, is an admitted long shot -- even though Bikini boosters have promised the black-eyed Iraqi nepotist the unhindered run of the place. "He can blast away to his heart's content and who'd complain?" asks one. "Hey, the only bleaker real estate is on the moon."

Sentimental appeal alone may commend the Falkland Islands, aka the Malvinas, to a violence fan like Saddam. The British-Argentinian war there in the '80s makes this South Atlantic dot-on-the-map no stranger to the reek of cordite or the whap-whap-whap of military helicopters. "And if he still has that jones about wiping out indigenous populations," notes one Falklands real estate agent, "we do have all these sheep."

But a close aide isn't optimistic. "Forget the Falklands or an Afghan cave or some remote tract of swamp in Paraguay," he shrugs. "Saddam's a guy who lives large."

Northern California's Silicon Valley, then? Don't scoff. The area is pretty much deserted nowadays, and Saddam intimates agree that all those empty former corporate HQs would make a perfect string of palaces, reminding the dough-faced military bully boy of home.

Feelers have gone out from the French Foreign Ministry about converting one of the still surprisingly intact blockhouses of the Maginot line into a deluxe compound, should humankind's Public Enemy No. 1 choose to retire to la vie en rose. France's handsome four-color brochure portrays an idyllic -- for Saddam -- world of gunports, bombproof subterranean quarters and ammo magazines, even an electric underground railway for quick getaways, all isolated from prying U.N. inspectors and other nosy Parkers. Possible clincher: Such a site would be a mere grenade's-throw away from some pretty distinguished local vineyards. That's important.

"You can take Saddam out of Iraq," burbles an old barracks comrade, "but you can't take the party animal out of Saddam."

Bruce McCall is a writer and illustrator whose work appears frequently in the New Yorker.