Intolerance on the left 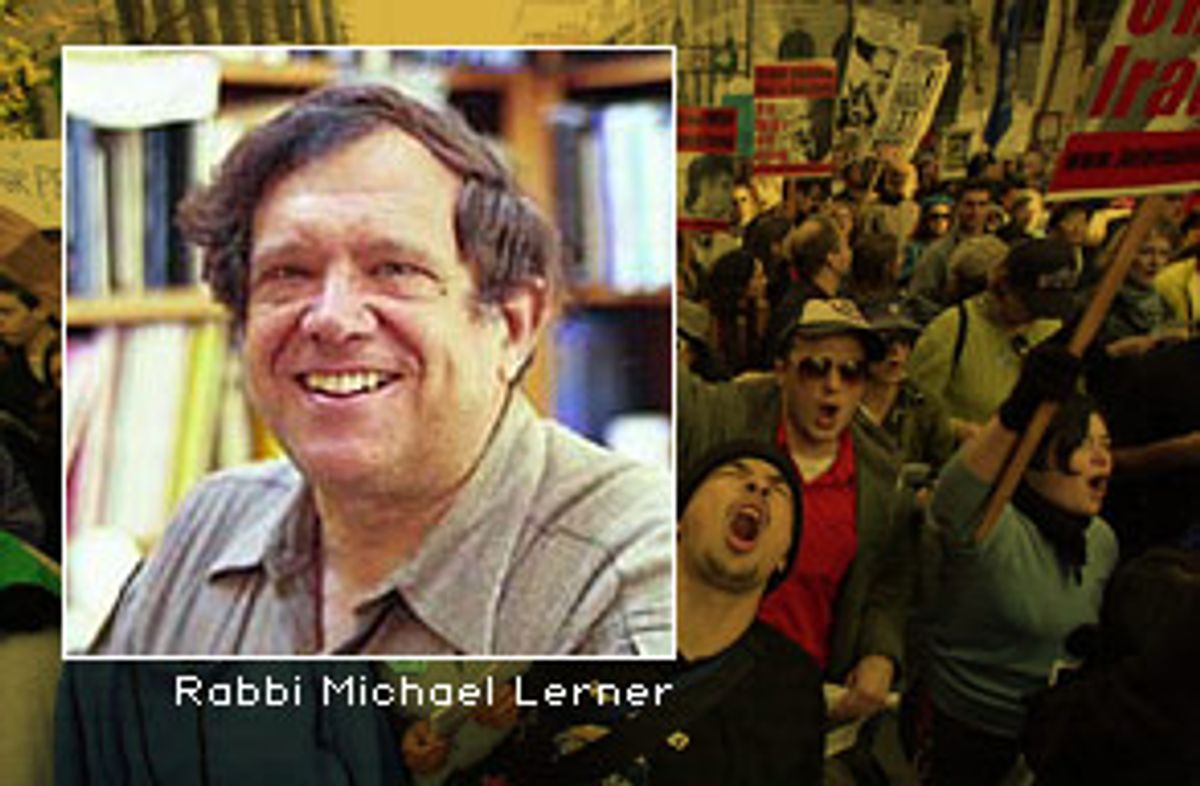 Even as other members of the democratic left have denounced the hardcore Maoists and Stalinists behind much recent antiwar organizing, Michael Lerner, the dovish San Francisco rabbi and editor of the liberal Jewish magazine Tikkun, has defended the role of sectarians in the movement. When members of his congregation complained about the stridently anti-Israel rhetoric at demonstrations sponsored by ANSWER, a front group for the Workers World party, he urged them to turn out anyway, and Tikkun sent busloads of people to both Washington and San Francisco. He co-signed a letter to Salon criticizing Salon's criticism of ANSWER and Not In Our Name, which is connected to the Revolutionary Communist Party.

So Lerner was understandably outraged to learn that he'd been banned from speaking at the San Francisco rally ANSWER is co-sponsoring on Sunday. The reason for his banishment remains murky. This much is clear: Organizers from the four groups collaborating on the rally -- ANSWER, United for Peace and Justice, Not In Our Name and Bay Area United Against War -- agreed that any one partner could veto a proposed speaker who had publicly criticized it, and ANSWER vetoed Lerner.

Some say that's because Lerner, while urging people to work with ANSWER on peace movement issues, also has denounced the group's rabidly anti-Israel, pro-Saddam politics. But Lerner says that the agreement giving ANSWER veto power over its critics was merely a pretext used by the group as an excuse to keep him off stage. The real reason for his exclusion, Lerner believes, is that, while he is unrelenting in his opposition to Ariel Sharon's government and his call for Palestinian statehood, he supports Israel's right to exist and condemns Palestinian terrorism. An ANSWER spokesman seemed to confirm Lerner's theory when he told WNYC radio host Brian Lehrer that the group wouldn't allow a "pro-Israel" speaker at its demonstrations. A Tikkun press release framed the decision this way: "Progressive Rabbi Banned From Speaking at Peace Rally Because of His Pro-Israel Stance."

Lerner knows better than to equate criticism of Israeli policy, no matter how harsh, with anti-Semitism. But he believes ANSWER crosses the line into bigotry. "It is anti-Semitic to make it sound as though Israel's repression of human rights is the worst instance of repression of human rights going on in the world today," he says. "It is not racist to criticize black crime, but it is racist to criticize black crime when you're not criticizing much greater white crime."

As it turns out, two other rabbis, David Cooper and Pam Frydman-Baugh, are scheduled to speak at the rally, as is a representative from Jewish Voices for Peace. They were invited by United for Peace, and ANSWER didn't challenge them. That's why Liat Weingarte, director of campaigns and programs at Jewish Voices for Peace, insists that anti-Semitism wasn't a factor in the Lerner affair. ANSWER didn't return Salon's call seeking comment.

Still, Lerner says the protest's organizers would never have allowed anyone to be banned from speaking for criticizing racism or homophobia in the peace movement and asks, "Why should anti-Semitism be treated differently?"

Thus while the antiwar demonstration in San Francisco will likely feel perfectly welcoming to Jews, ANSWER's blackballing of Lerner has quickly emerged as a symbol of the authoritarian and anti-Semitic tendencies that have left many grumbling about the group.

By Monday night, Michael Berube, a Penn State English professor who writes frequently about cultural politics, and Marc Cooper, a contributing editor at the Nation, had started a petition saying, "At a time when the antiwar movement needs as broad a platform and as broad an appeal as possible, ANSWER has chosen instead to put the interests of sectarianism ahead of the interests of all those who oppose this foolish and unnecessary war.

"We believe this is a serious mistake," continued the petition, "and that it exemplifies ANSWER's unfitness to lead mass mobilizations against war in Iraq." It was signed by some of the leading lights of the democratic left, including Todd Gitlin, Ellen Willis, Stanley Aronowitz, Robert McChesney and Katha Pollitt. On Tuesday, Tikkun started circulating it.

Ultimately, whether Lerner takes the stage on Sunday means little to the fate of the peace movement. But ANSWER's treatment of him has given many progressives a focal point for their anger at the group, which they feel discredits the left with knee-jerk anti-imperialism and unqualified support of killers like Kim Jong Il, Slobodan Milosevic and Saddam Hussein.

"It was a moment waiting to happen," says Gitlin, a Columbia University journalism professor and historian of the 1960s. "Lots of people had been grumbling, muttering and barking about the usurpation of the platform by ANSWER."

Says Berube, "Lerner is a guy who has really gone out of his way to build coalitions with groups like Not In Our Name and ANSWER. When he sent out that press release, I felt this is really too much. If they can't work in a coalition with Lerner, I don't see any hope that a group like this is going to build a coalition of grandmothers, cautious conservatives, liberals, students and people taking time off from work to go a rally."

Of course, many such people have gone to ANSWER-sponsored rallies in the past, and many are likely to go again, but Berube believes that with war imminent, the pressure on dissenters to back the military is going to increase, and the integrity of their message will become more important.

"I really do think the bombs are going to be dropping within weeks," he says. "Now the question is going to be what kind of protest is there going to be against this war once it begins. There's a lot of pressure to rally around the flag once troops are in conflict. This antiwar movement, which has such a groundswell, will either dissipate and the left will become even more irrelevant, or there will actually be some traction."

Among the antiwar intellectuals who signed Berube and Cooper's petition, there's an overwhelming sense that a principled, intellectually consistent movement is urgently needed. "What we need right now is a pro-democracy movement that's attacking on all fronts the drift of the U.S. towards authoritarianism domestically and towards this lunatic adventurism overseas," says Ellen Willis, a veteran feminist organizer and professor at New York University.

ANSWER's critics say that such a movement can't be built on a delusional, tyrant-venerating ideology. "One of the arguments against me and people like me [who criticize ANSWER] is that the left now is doing its own dirty work," Berube says. "My counter is that ANSWER's politics are not going to be ignored forever. It's not as if these kinds of associations will delegitimate the antiwar movement only if the right finds out about them. They'll delegitimate it if a lot of the attendees find out about them."

According to Willis, the problem isn't just a tactical one of whether ANSWER will alienate potential mainstream marchers. It's a moral and political one. ANSWER, she says, "is pernicious and just as much my enemy as the Bush administration is. Thankfully, they don't have the power the Bush administration does, but if they did I'd be one of the first ones they would get rid of."

Willis is still debating whether she's going to march this weekend. Lerner isn't. Despite it all, he's still telling whoever will listen to add their bodies to the throng while adding their voices to the growing chorus disavowing ANSWER. "I believe the right approach is to both oppose the war and oppose anti-Semitism in the antiwar movement," he says.