In search of a lost literary giant

In his bittersweet documentary "Stone Reader," Mark Moskowitz tries to track down a vanished novelist -- and a fading conception of literary greatness. 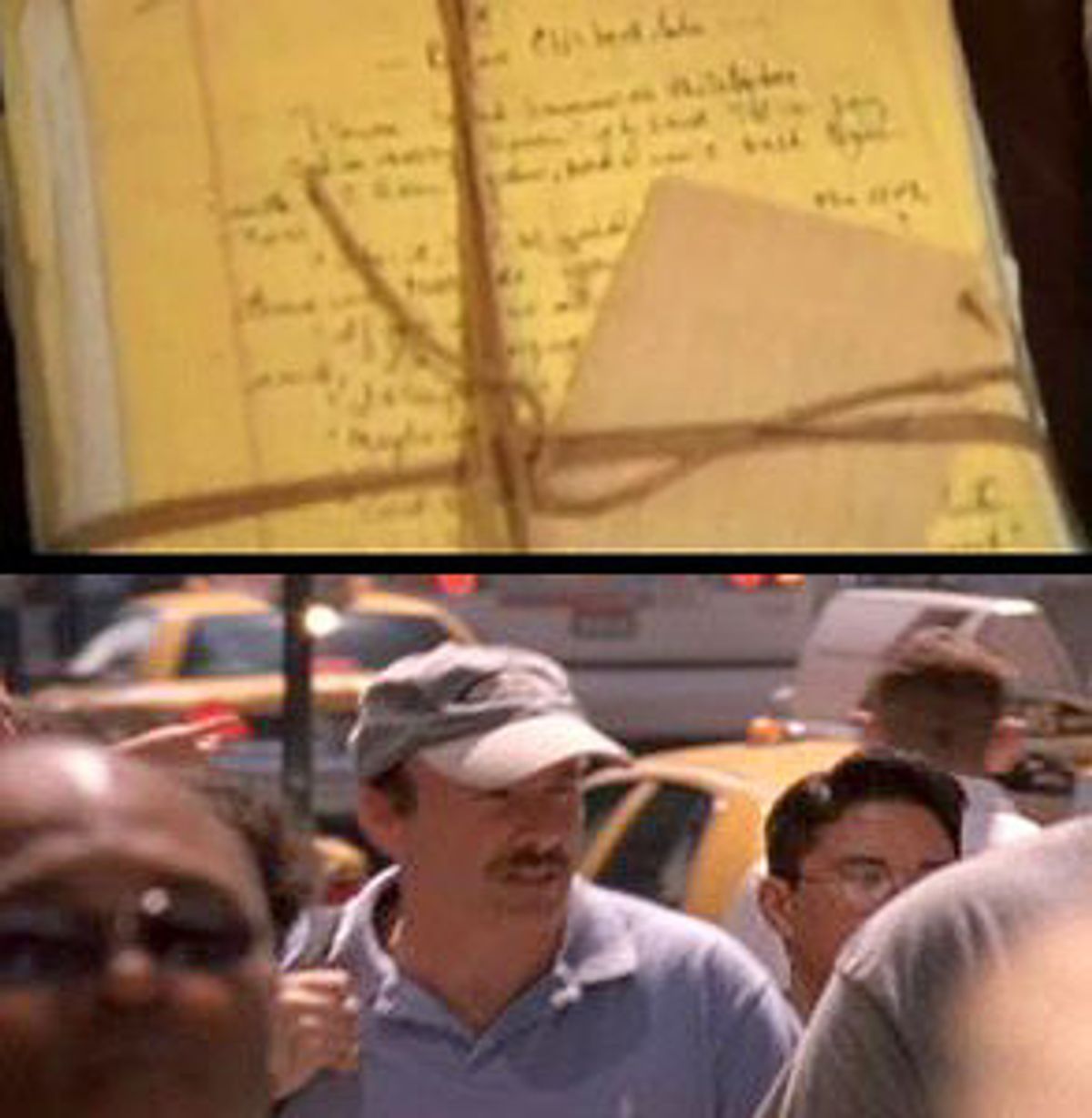 There's a telling scene early on in Mark Moskowitz's documentary about his quest to find the author of a book he loves, a first novel published in 1972. He shows up at the Maine home of John Seelye, the reviewer whose rave in the New York Times convinced Moskowitz to buy the novel, and starts unloading copies of other books, his favorites, practically shoveling them into Seelye's arms, hoping, it seems, for a positive reaction, a flush of recognition. Occasionally Seelye has read one of them and even liked it, but more often than not he responds with a shrug, a shake of the head, or a noncommittal "It's good," that thing people say when they find a work admirable but not enchanting, or at least not as much so as you do.

"It was good," in that same indifferent tone of voice, is exactly what Moskowitz says of Ernest Hemingway's "The Old Man and the Sea" in another scene. One of his bookish friends has been telling him about how much he loved the novel in his youth. Throughout the film, Moskowitz keeps pushing copies of the book that serves as the premise for this film, "The Stones of Summer" by Dow Mossman, on various pals, but most of them explain that they "couldn't get into it," which is what Moskowitz himself said when he first tried the book back in the '70s. He opened it again in 1998 and fell under its spell, and "Stone Reader" is his answer to the discovery that Mossman never published another book.

Ostensibly, "Stone Reader" (which opens this week at New York's Film Forum before a planned national rollout) is the story of how hard it is to be a genius, or at least a "serious" literary writer, and of how fickle the fortunes of the publishing industry can be. But that is an old and tired story; what "Stone Reader" offers that's new is its portrayal of reading not as a supremely civilized and soulful activity but as a lonely, thwarting and sometimes painfully embarrassing one.

Adoring a book and trying to convince other people of its merits can make you feel like a Jehovah's Witness. If we're honest about it, most of us do not welcome book recommendations. Sometimes it seems that there is no more annoying pair of sentences than "You should read this book. You'd really like it." The more passionate the endorsement, the more suspect it becomes. The truth is that "You'd really like it" rarely means the speaker has taken into careful consideration your tastes and interests and is suggesting this book accordingly. Instead, it means "I love this book and can't bear the fact that I have no one to share it with, that the thoughts and emotions it stirred in me are swirling around the confines of my skull like hallucinations. Read it, please, and make me feel less alone."

Moskowitz has good cause to feel isolated in his enthusiasm for "The Stones of Summer"; he spends at least half of the film interviewing people who have never heard of it, from the late literary critic Leslie Fiedler to Bob Gottlieb, who was the editor of Joseph Heller's "Catch-22." He finds people who attended the Iowa Writers' Workshop during the years Mossman was there and other novelists published by Bobbs Merrill (a press that shortly thereafter was ordered by its corporate owners to leave off publishing fiction entirely); none of them even remember Mossman.

Seelye, the Times reviewer, never met Mossman and doesn't know what happened to him. Moskowitz even flies to Florida to show the book's jacket designer the cover art, hoping it'll refresh his memory. The designer, polite but baffled, says: "I just don't remember it. It looks familiar, but I've done hundreds of books." Moskowitz is persistent, though, and people humor him. "I can't believe a guy could write a book this good and just disappear and never do anything again," he says.

Eventually, Moskowitz's investigative fortunes improve, but the whole "quest" angle of the film is a shaggy-dog story; for the cost of the airfare to Florida he could've hired a private detective to track Mossman down in a matter of days. Much of "Stone Reader" is similarly spun out of the flimsiest stuff, visually speaking. Writing is a famously noncinematic activity, but it turns out that reading is even more so, leaving the documentarian in a fix. Moskowitz makes his living filming political ads, however, which must account for his expertise at pairing unphotogenic content with feel-good pictures.

Voice-overs describing the Web searches and phone messages and letters at the core of Moskowitz's hunt meander over seemingly random images shot in his rural neighborhood: soaring hawks, nodding daffodils, autumn trees. One long reminiscence about visiting a paperback bookstore as a kid and plowing through "The Thin Red Line," "The Naked and the Dead" and "Catch-22" in succession unspools over footage of Moskowitz's little son wandering around what looks like the midway of a state fair at dusk. Pretty, but: Huh?

The filmmaker needs that quest structure to hold his movie together, clearly, but the familiar tale of waylaid genius turns out to be less fascinating than Moskowitz's drive to make a movie about it, and the little community of readers he explores. Scenes in which Moskowitz gives a tour of his bookshelves, explaining his elaborate ordering system, or films his friends, the kind of guys who talk about being "turned on" to certain books by their buddies, have an endearingly nerdy quality. Against the odds, they've found a way to share what's usually a solitary pleasure.

Eventually, though, that charm collided with my growing awareness that Moskowitz's taste seems to be impeccably exclusive of my own. Whenever he gushes about a book, I dislike it (if I've read it) or it holds no appeal to me (if I haven't). You don't hear much about the actual content of "The Stones of Summer" until late in the film, and when someone describes it as having "a message about someone finding himself and about rebellion," I became firmly convinced never to read it. (The same person also announces, "There's the voice of a shaman in Dow's work and also the voice of a poet," though it would be unfair to blame Mossman for that.) What comes between book lovers, alas, is often the very books they love.

Still, what literary person wouldn't be heartened to witness the commitment of all these readers, when readers are the lifeblood of what we do? Moskowitz and a boyhood friend scan the shelves of a children's library, rhapsodizing about the days when "you'd just read, every day, and get a new book from the library every day," and the time when Johnny read "A Connecticut Yankee in King Arthur's Court" and then "everybody had to read it."

Seelye, a hale man with a white beard, sits at an outdoor table with Moskowitz and some friends chatting intelligently about Hemingway and Fitzgerald, looking like an undergraduate's fantasy of an American man of letters crossed with Santa Claus. Moskowitz says talking with him was "like talking to someone who'd taken trips to some of the far-off places you thought only you had seen."

The overall tone of "Stone Reader," however, is elegiac. The people interviewed, so many of them snowy-bearded literary lions in winter, clearly feel they have a tenuous hold on a culture that is ebbing away. While Moskowitz drives through Iowa listening to the radio, we hear Norman Mailer telling Terry Gross of "Fresh Air" that he fears the novel is in the process of vanishing entirely. And how sad, for as the memoirist Frank Conroy tells Moskowitz's camera, when you read a book you love "you feel that you are the brother of the author and the two of you are working together."

On the other hand, I've felt many things while reading books, some of them sublime things, but I've never felt like anyone's brother. At the film's end, in a little vignette that's meant to signal hope for the future, Moskowitz films his son receiving an Amazon box from the FedEx man and opening it excitedly to pull out a copy of "Harry Potter and the Goblet of Fire," a novel that no one can feel isolated in reading, whatever you think of it. You suddenly realize that, of the dozens of books held up to Moskowitz's camera by fervent readers, this is the only one written by a woman. Nobody Moskowitz interviews is a woman (except for his own mother), even though women are the principal buyers and readers of literary fiction.

It's not so much that the literary world is fading away as that a particular version of it is. Perhaps the one that's replacing it is just as blinkered as Moskowitz's, and perhaps "The Stones of Summer" is truly a neglected work of genius, "the book of a generation," as Seelye called it. But that was back when serious novelists felt entitled to speak for a whole generation, and those days are gone. It's hard to mourn them, especially when you don't have the apparatus to feel like anyone's brother. It baffles Moskowitz that Mossman and his book fell into obscurity, and no one with a heart would wish that fate on a talented and committed artist. But there are many ways of being invisible. Maybe the real story behind "Stone Reader" is about a bunch of readers who finally got sick of theirs.