My daughters and I seem impenetrable to outsiders. Maybe that's why I haven't had a date in five years. 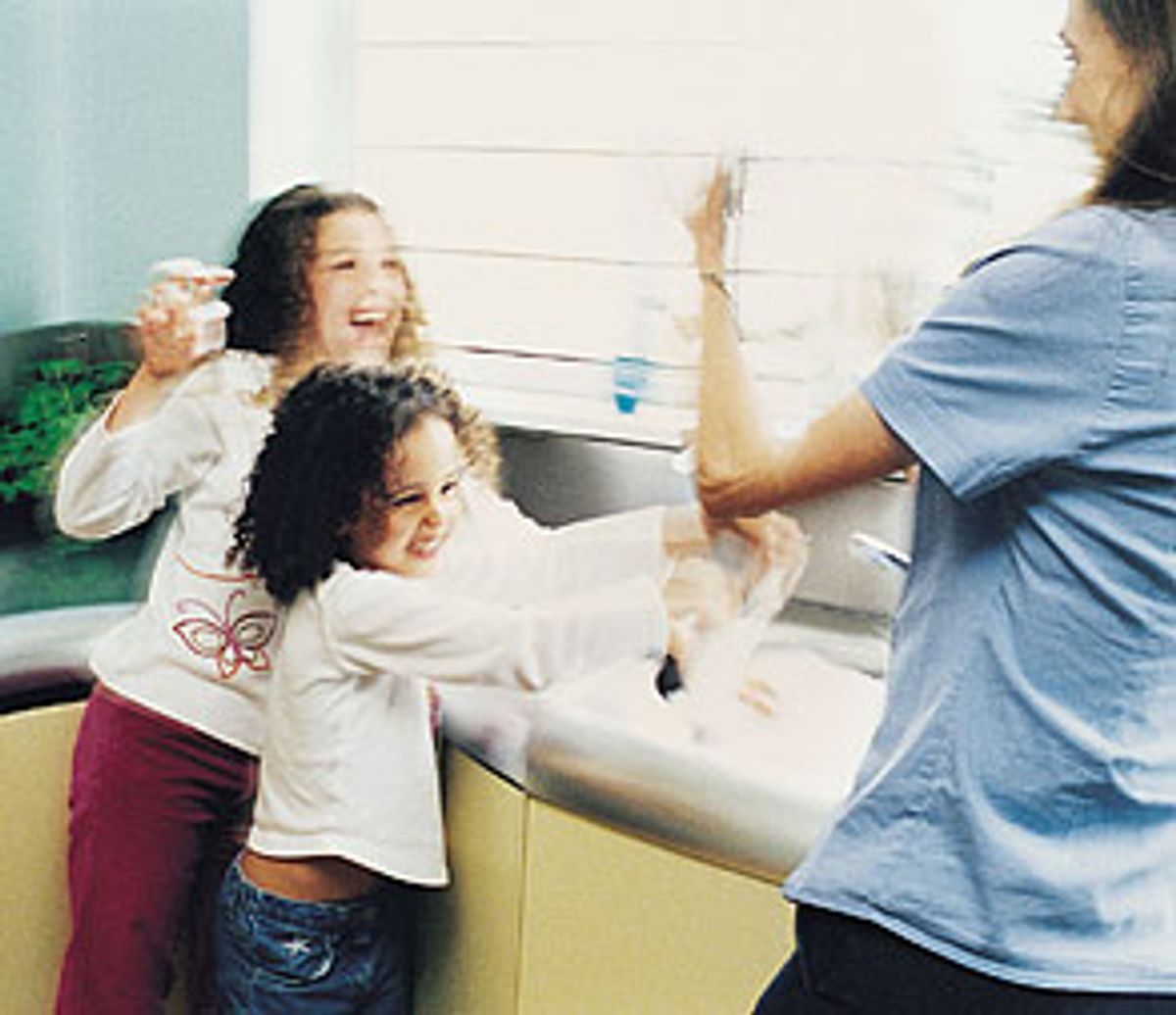 When I hear my three daughters shout through the bathroom door, "Hurry up, we're going out to the van to wait for you!" I know I have about four minutes left for my entire beauty routine. Of course, I've already combed and braided their hair, signed homework and found socks.

I put on moisturizer since I just turned 42, apply the kind of cheap Maybelline lipstick that doesn't come off so I can kiss my kids goodbye without leaving traces of me on their cheeks, and attempt to plug in the curling iron before hearing them turn up the car stereo.

That's why they take my keys and wait in the van -- so they can blast the music. I give up, unplug the curling iron, and pull my hair into those clips all the harried moms wear.

When I descend the porch steps, I see all three of my daughters, heads bobbing, bass thumping from the open window as they sing along with their new favorite song: "Angels Must Die."

OK. So if there had been a personable single male jogging in front of my house, or maybe wanting to use the phone because he'd run out of gas, I'm willing to bet that he'd take one look at us and head the other way.

Earlier this month, I realized that I haven't had a date in exactly five years. I have been divorced for six. I try to figure this out sometimes, when I'm not too tired. My friends try to figure it out all the time. Terri K, a landscaper twice divorced, berates me for not even attempting to date. She got a new boyfriend in two months. Of course, on her equipment trailer she also has a sign: "Grow Your Own Dope -- Plant a Man."

"You refuse to wear mascara," my neighbor Juli says. This is true, but somehow I don't think eyelashes would help.

One reason I've been thinking more about my dateless life is "The Gilmore Girls," which we began to watch a few months ago. Lorelai had a baby at 16, looks great in her 30s, and meets men all the time. This seems like a fantasy life to me.

At 22, I married a guy I met in the eighth grade. I had kids in my late 20s, and we got divorced when he went through midlife crisis early -- at 35. Other people are just getting married at 35 and starting their families, and I feel ancient next to them. In those magazine or "Oprah"-show formulas where you add years to your life or subtract them, according to lifestyle, I must be 89.

There is no cute guy who owns the diner near me, no brilliant teacher at my kids' school who looks soulfully at me during parent-teacher conferences, and when I mention this jokingly to those friends impatient for me to date again, they say, "Well, yeah, not with the way you and the girls act!"

So I'm not a great role model for romance. When I was dating their father, we were all so poor that a night out consisted of eight or nine of us -- my girlfriend, me, and a bunch of guys from the basketball team -- cramming into a car and cruising aimlessly. For diversion, we played games: When someone saw a car with one headlight, she (it was always my girlfriend or me) shouted, "Padiddle!" and then hit everyone else in the back of the head. When we saw a Volkswagen, we shouted, "Slug Bug," and, well, you can guess. We slugged the guys.

My girls know all this, because they are obsessed with Slug Bug, punching out anyone in the car. They've also added their own twists: Con-hurt-ible, which requires a slap for a top-optional car, and PT Bruiser, which requires a pinch.

Inventive, they are. Scary, I'd assume. We all have a blast on the way to school, I must say, but as their favorite song fades and is replaced by something equally loud and nihilistic, like the new Sublime or System of a Down song, I realize no interesting guy in the Volkswagen, convertible or PT Cruiser is going to do anything but stare at us, appalled.

They're beautiful, my girls, head turners. I'm more generic blond and short with that whole no-beauty-routine thing. It's not that we don't make an appealing picture. Just a frightening package. Because we're always together -- laughing, singing, punching, practicing basketball, lugging tubas, walking the dog, or hanging out on the couch.

And that's the other reason I probably won't get a date anytime soon. I hadn't realized what we were until this summer, when poet Terry Tempest Williams, who was very kind to us at a writer's conference, observed my little family and told me with a smile: You and your girls are a pack. We have our own running rules and secret language and we seem impenetrable to outsiders.

This Valentine's Day, as my women friends compare appropriate/laughable gifts and I shrug, empty-handed, they will again admonish me about not dating, not providing a male role model for my girls, not attempting to be a female role model for my oldest, who is 13 and has boys calling her. They will repeat the mantra: "If they see how you handle relationships, they'll be better off."

In the past I'd had a game plan for my daughters' dating, and it made "Eight Simple Rules" look friendly. I had their father -- 6-foot-4 and 295 pounds, brown skin and Big Dog shirt, a correctional officer with that whole preemptive-strike face.

Once I was divorced, though, I had to set the tone alone. It somehow happened instinctively. That first week of fall, when the junior high boys walked home past my yard and said, "Bitch," not even directing it at anyone but letting it hang in the air casually while my girls and their friends lingered on the grass, I went outside and said, "If I hear you say that word again on my sidewalk I will take off this high heel and make a hole in your forehead."

They started walking on another street altogether. My eldest rolled her eyes and said, "Oh, I'm gonna have so many guys wanting to talk to me," but she has inherited the same kind of mouth, I'm afraid, as mine. When boys tried to impress her on the junior high court by praising her favorite team, she said, "You don't even know their offensive rebounding percentages. Please."

My middle daughter, who looks like a tanned Audrey Hepburn, is 11, such a good ballplayer and yet so beautiful that boys get angry during games, saying, "I'm gonna kick your ass, bitch." She responds by extending her elegant neck and stealing the ball from them five or six more times, finally asking the deadpan question: "And that's gonna start when?"

My youngest is 7. When men try to make friends with her, possibly to ingratiate themselves with me, it's difficult: She head-butted one, and stomped on another one's sandaled foot so hard a toe began to bleed. She doesn't like men at all. She likes dogs.

This fall, my daughters played basketball six days a week, and anxious women friends suggested that nice single fathers might have kids in the gym, or there could even be nice single referees. But my ex-husband was coaching the girls' team, and I ended up on the bench next to him or just behind him, yelling instructions or applying ice. Any interested man, I informed those women friends, would see me adjacent to a very large man wreaking havoc on his own huge knuckles and directing his daughters to "Rip him, now!" when a kid brings the ball upcourt. Not a real encouraging setup.

And so I realize, as the ads featuring flowers and jewelry for Valentine's gifts repeat themselves on my TV during "Gilmore Girls" reruns: I will probably never date, as I am never alone except when I walk the dog, the only male in the household, who, as a former pound dog who wasn't neutered until he was 7, hates every canine on the sidewalk, and thereby prevents any possible conversation with an eligible and kind dog owner.

It's me, too, I know. I am afraid of dating, afraid not of rejection, but of having to speak the language not spoken in our pack. I am afraid of someone looking too closely at my face, my hands, because my girls are so used to my face that if I had tar on my forehead they would never notice. Then I read another of those endless parenting articles that suggests that after divorce, kids have to be eased into the idea that moms will eventually share their love with another adult.

Five years, I think. OK, but how long until I'm eased into it?

I sleep after midnight, listening to my daughters turn in their sleep down the hall from my open door. Two or three nights a week, someone comes into my room because of a scary dream, or a fever. I open the covers and she curls against my back and eventually her sighs turn to sleep again.

In the mornings, I make breakfast, comb hair and pull on Dickies for work after briefly considering a skirt, which entails tights and trouble. A neighbor who remarried after her divorce always says chidingly to me, "No wonder -- you dress like a guy."

But not until I go down the porch steps and see my daughters sitting in the van, windows open, moving their lips to a song, do I know in my heart that Terry was right: We are a pack, and I don't know how to let anyone else in. We are four throats and one eye, watching for Slug Bugs, our laughter trailing to the early-morning moon.