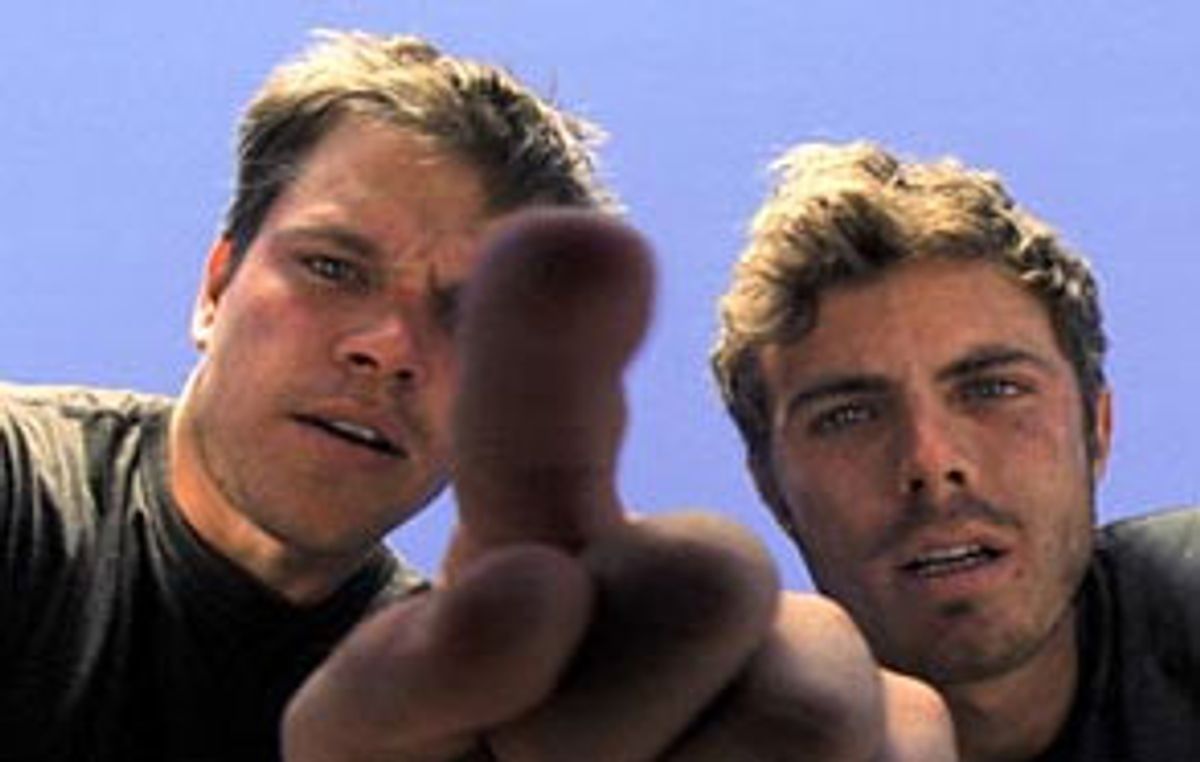 Gus Van Sant's "Gerry" is a haiku with way too many syllables. It's a spare movie, with only two characters and very little dialogue, and yet its minimalism is full of static. Van Sant has said he was inspired by the work of Russian filmmaking legend Andrei Tarkovsky and Hungarian avant-garde filmmaker Bela Tarr, and there are long stretches where the camera barely moves at all. He's clearly challenging modern mainstream audiences -- not that this picture is going to be packing 'em in -- to look at movies in a new way, to pay attention to every corner of the frame, to note the faintest rustle picked up by a mike.

That approach might have worked if Van Sant weren't just borrowing age-old avant-garde techniques to tell a not-very-interesting story and to poke at some not-very-deep philosophical points. "Gerry" moves slowly and deliberately, like a torture technique, leaving us feeling as dry and dusty and lost as its two characters.

"Gerry" is the story of two guys, played by Casey Affleck and Matt Damon, who head out for a wilderness hike and get very, very lost. It takes place in the present day, somewhere (or so it looks) in the American West, but the locale is really just a stand-in for any generic nowheresville, or the barren terrain of the human soul, or something. There are only two characters in "Gerry," but there are lots of landscapes, shot with so much attentiveness that we become intimate with every little twig and crack: We see a dusty road dotted with scrubby trees and sun-fried bushes, giant golden-brown rock formations squatting stubbornly beneath cloud-dotted gray-blue skies, a stretch of parched whitish land that looks like tundra. Damon and Affleck, two solitary yet united figures, trudge through these landscapes looking for a way out, talking about everything and nothing -- the shorthand of longtime friends -- in their almost-silence. There's so little dialogue that what's there dangles before us like the belly of a pregnant cat: "Everything's gonna lead to the thing," Damon tells Affleck as the two try to decide which fork of the wildnerness path they should take. Later, when they're truly lost, Damon laments, "We haven't seen any of the fucking stuff that we've seen." And then there's this frustrated reprimand: "The whole plan was if one guy found something he would go over to the other guy's mountain."

"Gerry" is an existential puzzle, a pokey brain teaser, and its themes ride into town like a bored and grizzled wild bunch just too tired to fight: Man plays only a tiny role in nature's grand scheme; our existence in the universe is futile, yet we cling to it with fervor; human connection is everything; we do not really know where we have come from, or where we are headed; we all feel a burning need to hunt for the thing that is not there. To paraphrase Jerry Lewis' rhapsody over Anita Ekberg in "Hollywood or Bust," "We're soiching -- soiching!" "What are we searching for?" "We dunno. That's why we're ... soiching!"

Damon, Affleck and Van Sant (the three wrote the movie together) are soiching too, and it's obvious they put a certain amount of skill and care into their dogged trudging around. Cinematographer Harris Savides clearly lavished a lot of love on every pinky-beige mountain and cumulus cloud. And in a movie as quiet as this one, sound design often takes center stage: Every stomach gurgle in "Gerry" is potent.

But that just means "Gerry" is ingenious without being very interesting. It looks as if, after making a perfectly enjoyable mainstream hit ("Good Will Hunting") and then a pale, limp imitation of that hit ("Finding Forrester"), Van Sant is out to reclaim his artistic street cred with this "Waiting for Godot's Teenage Son."

But Van Sant, Damon and Affleck aren't Samuel Beckett, and never will be. Beckett is a surface minimalist only: His texts are loaded, and their sparse poetry resembles those Japanese paper flowers that expand in water; they bloom ever larger, and more vividly, the more you live with them. He scripts extraordinarily cinematic moments without spelling them out, as in this passage from "Krapp's Last Tape":

"She lay stretched out on the floorboards with her hands under her head and her eyes closed. Sun blazing down, bit of a breeze, water nice and lively. I noticed a scratch on her thigh and asked her how she came by it. Picking gooseberries, she said. I said again I thought it was hopeless and no good going on and she agreed, without opening her eyes."

That one small passage is more vivid and resonant than the whole of "Gerry," which began to skitter from my memory like a skeletal tumbleweed just minutes after it ended. "Everything's gonna lead to the thing" is one of the most hopeful lines in all of movie history, but it's also dispiritingly false. There are many, many routes to the thing. But you still have to be careful which one you take.