Hundreds of thousands turn out for a massive antiwar protest, and it's decidedly a Big Apple crowd -- from black-masked anarchists to shrinks against war and "yuppies for peace." 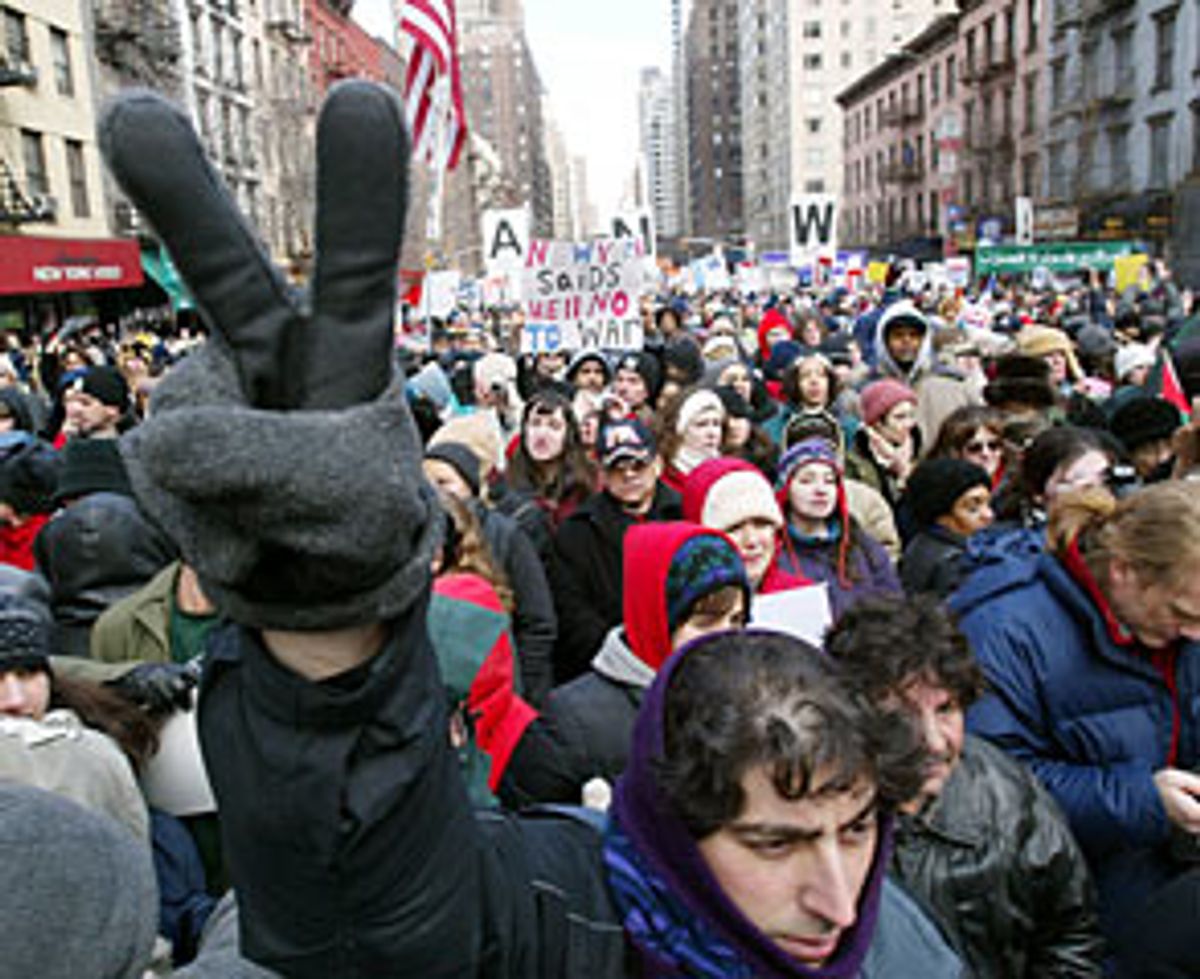 Mayor Bloomberg's administration may have refused to grant protesters a permit to march Saturday in midtown Manhattan, but it couldn't keep them standing still. The antiwar rally hadn't even begun when thousands of people making their way there spilled off the sidewalks on Third Avenue and took over the street, chanting and singing, exhilarated by their own numbers.

As usual, reliable approximations of those numbers were hard to come by. The police commissioner estimated 100,000, while United for Peace and Justice, the rally's organizer, claimed 400,000. What seemed clear is that far more people turned out in the below-freezing cold than the authorities had anticipated. The city had given organizers a permit to hold a stationary rally in Dag Hammarskjold Plaza near the U.N., with overflow crowds to be accommodated on First Avenue. As it turned out, the crowd stretched from 49th Street to 72nd Street on First Avenue, while filling broad swaths of Second and Third Avenues, as well as Lexington, effectively shutting down half of midtown Manhattan.

Many protesters were aware of the global movement they were participating in. Throughout the crowd, people held radios aloft broadcasting news of massive antiwar turnouts worldwide -- 750,000 in London, a million in Rome, 1.3 million in Barcelona, half a million in Berlin, 100,000 in Paris, 80,000 in Dublin and hundreds of thousands more in cities across the country and around the world, from Biloxi, Miss., to Los Angeles, from Moscow to Cape Town, South Africa.

"I'm here to show solidarity with the rest of the world," said Karyn Kauffman, a 56-year-old from Boston who was listening to reports on her headphones. "I'm not a big fan of demonstrations. Usually I feel like they're preaching to the converted. But I couldn't stay home and do nothing. This is an illegitimate president pushing for an illegitimate war." Surveying the surging mass of people on Third Avenue, she said, "This is really historic. It's the first time there's been a worldwide movement to stop a war that hasn't started yet."

Yet even as demonstrators declared that they were standing with the world -- and especially with Germany and France, whose opposition to war with Iraq in the U.N. was commended on sign after sign -- the event was filled with the burnished spirit of New York. Although there were marchers from across the country, locals predominated, many angrily rejecting the way they say the administration has hijacked their city's grief. "The New York that I knew growing up is coming back," said Brian Ferreira, a 24-year-old substitute teacher from Queens. "For a long time we've been in a docile mourning state." The Bush administration, he said, is "trying to profit off our loss."

The sense of New York reclaimed is partly why the march felt so different from recent antiwar demonstrations in Washington. Rather than a collection of delegations from various locales and interest groups, the overwhelming sense on Saturday was of an indignant city rising up. "Whose city? Our city!" went the chorus of one of the cheers.

Organizers helped create the righteous-but-rational mood. Saturday's demonstration was the first big event put on by United for Peace and Justice, a group formed partly to wrest control of the antiwar movement away from the hard-left sectarians who had dominated it. While there was plenty of the kind of fiery rhetoric that drives fifth-column watchers like David Horowitz into an ecstasy of outrage, most of it was directed at Bush as opposed to America. An impassioned, almost preacherly Danny Glover raged that our democracy has been "hijacked by an administration of liars and murderers," while Pulitzer Prize-winning playwright Tony Kushner declared, "George Bush is a killer clown." Other speeches were delivered by former Manhattan borough president and mayoral candidate Ruth Messinger, Rep. Dennis Kucinich, D-Ohio, and Archbishop Desmond Tutu, who shouted, "Peace! Peace! Peace!" Imprecations against blood-sucking capitalist imperialism were scarce.

Yet it was really the brainy New York crowd who made the case that enormous numbers of respectable citizens are outraged by the direction their country is being dragged in. Contempt for President Bush was rife, but in five hours, one saw few, if any, images of him with a Hitler mustache, a favorite at the recent D.C. protests. Nor were there any sign of Israeli flags adorned with swastikas.

More typical was a sign with a 1918 quote from Teddy Roosevelt, stating, "To announce that there must be no criticism of the president, or that we are to stand by the president right or wrong, is not only unpatriotic and servile, but is morally treasonable to the American public." Many carried images from Guernica, the Picasso masterpiece that was draped at the U.N. so Colin Powell didn't have to talk of war in front of images of war's horror.

There seemed to be almost as many seniors as college students, people like Harry Fisher, a slightly frail 91-year-old veteran of both the Spanish Civil War and World War II and author of "Comrades: Tales of a Brigadista in the Spanish Civil War." "Those were wars against fascism, and they were justifiable," he said. "Iraq may have an evil leader, but he's not a danger. And who are we going to kill? Innocent people. I've seen too many innocent people killed."

Fisher was marching along with 87-year-old Moe Fishman, Secretary of Veterans of the Abraham Lincoln Brigade, an organization formed in 1937 by men returning from the fighting in Spain. Fishman, a bright-eyed man with a knowing, gleeful smile, permanently injured his leg fighting fascists in Spain, but was so determined to help in World War II that he joined the Merchant Marines, the only branch of the military that would have him. Though he blames United States foreign policy for creating the fury terrorism feeds on, he's clearly no America-hater. "There's a higher patriotism than to say, 'My country right or wrong,'" he said. "It's my country to defend when it's right and correct when it's wrong."

Old New York progressives like Fisher and Fishman set the tone much more so than the handful of anarchists in black balaclavas. When one of the latter jumped atop a truck to wave his red-and-black flag, a man in the crowd with a trim goatee turned to me and said, "Just write down that it's one idiot doing it, not everybody else."

In fact, most people went out of their way to be polite to the police, even when things got tense as the cops closed off cross streets and kept large groups penned in blocks away from the heart of the rally. Yes, there were hundreds of arrests, mostly for disorderly conduct. One policeman was taken to the hospital after an assault and another was thrown from his horse when someone in the crowd set off a firecracker. Yet in most of the rally a spirit of cooperation predominated, leading police commissioner Raymond Kelly to tell the New York Times, "I think it went well. For the number of people here, it was orderly." On almost every block, protesters approached policemen to thank them for doing their jobs. When a bratty punk kid moved the metal barricades to briefly trap a distracted, exhausted-looking young cop, an older, ponytailed man was quickly by the policeman's side apologizing. Near the rally's end, a smiling officer stationed at 62nd and First said he hadn't seen any scuffles, saying, "This is better than most of my family reunions."

Even the crazy people were crazy in a middle-of-the-road sort of way. There was a man screaming himself hoarse while pressed against the barricade on First Avenue, but his message was scarcely to the left of Joe Lieberman. "Call your senator!" he was wailing. "The Senate has the power to call Bush back for another resolution!"

As he bloodied his vocal cords, a scrubbed blond couple in black walked by, huddled together and carrying a sign saying, "Yuppies for Peace." Tim Lovelock, a 23-year-old project manager for a multimedia firm, and Eva Lane, a 22-year-old financial consultant, were trumpeting their yuppiedom because they wanted to make the point that it's not just "left-wing radicals" who oppose the war. "Large parts of American society are against this war," said Lovelock. "It's really great to see this many people out in New York City." The two went to Washington on Jan. 18, and Lovelock said, "There seems to be a lot more ordinary people here."

It could be that there's a psychological reason so many normal New Yorkers turned out, overwhelming the little knots of Spartacus Leaguers and would-be smashers of the state. Jessica Benjamin, founder of Psychotherapists for Social Responsibility, said the march was a "fantastic breakthrough" for New Yorkers who'd been silenced by the trauma of Sept. 11. "People are refusing to just be passive and helpless," she said.

A lovely, tousle-haired blonde, Benjamin was marching with a whole contingent of shrinks, several of whom offered snap diagnoses of the neurosis driving our president. "Megalomania," said an eagle-faced man with thick, wavy hair.

"Unresolved issues with his father," chimed Benjamin. "An Oedipal crisis."

"Delusional clarity," countered the man. "That's when you think you really know what's going on."

They weren't the only ones basing their opinions on medical expertise. Pat Diskin, a 63-year-old apple-cheeked Massachusetts woman in granny glasses and rubber boots, spent 27 years as an army nurse stationed in Vietnam, Grenada, Egypt and other countries. Part of her job was training troops to deal with battlefield injuries -- including those from nerve gas. "I've got a real good idea of what could go wrong with nerve agents," she said. "It's inconceivable that we're risking that. When I was in Vietnam, George was over in the National Guard. I wish for one minute he could get a feeling for the horror of war."

Perhaps because she's new to protesting -- she joined the peace movement six months ago -- Diskin was full of optimism that by pouring into the streets, people could change history. Gazing ahead at a sea of people on Third Avenue that seemed to stretch forever, she said of Bush, "It's amazing. How can he not understand what the people are saying?"