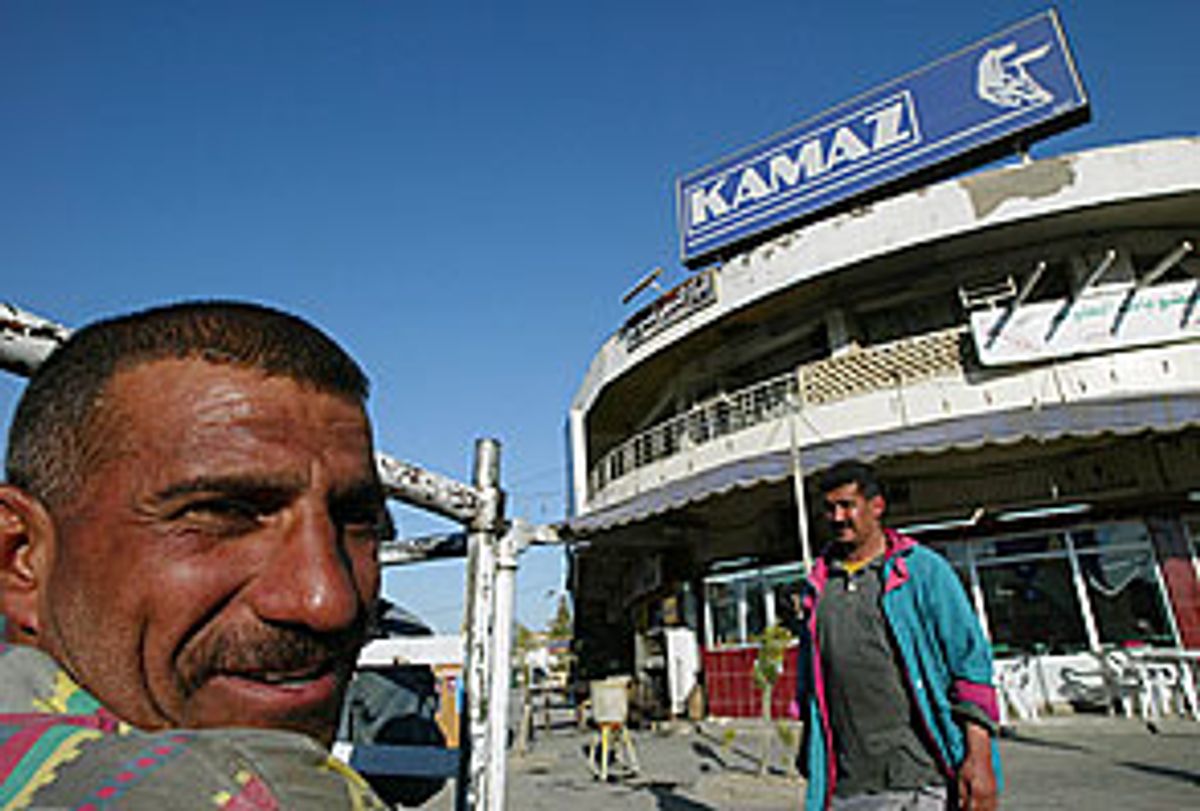 The Victory Leader Museum in Baghdad is supposed to be a celebration of the life of the Iraqi president, Saddam Hussein. It houses, among other knickknacks, the gifts he has received and the books he has written. A ballroom-sized hall is dedicated to a description of his life in pictures and accompanying text. In the police state that is Iraq, the museum should actually be off-limits to the people, for it is beyond comprehension that any visitor could fail to see it for what it is: A megalomaniac's blinkered description of how he has run a wealthy and rapidly developing country into the ground.

"In any other country, the leader would have resigned by now, don't you think?" an Iraqi government employee, who for obvious reasons does not want to be named, asks imploringly. A local political analyst who is normally much more cautious says angrily, "What kind of government is this? It drags its people into all kinds of dangerous adventures without even consulting us."

In whispering, cautious tones, such criticism has become much more widespread than before the latest crisis that has befallen the country. U.N. Resolution 1441 and the American threat of imminent military action have at least prompted some people to feel more free to speak their minds. These tend to be people who firmly believe that in the end the Iraqi regime will be removed. "A superpower like the USA cannot afford to let a Third World country like Iraq win this confrontation," says the analyst.

The Victory Leader's Museum makes it clear that Saddam Hussein was not always on such bad terms with the world. "We have gifts from all over, including from France and the USA," says a guide. He walks along rows of glass cases housing elaborate silver trays and plaques from countries such as India, Argentina and Ivory Coast. The only American items on display are a seal of the Senate of California, given in the 1980s, and, incongruously, a signed New York Giants football, "given by the coach in 1998," the guide claims.

Ironically, this grandiose celebration of Saddam's life brings home just how precipitously Iraq's fortunes declined after he rose to power. Just one year after being sworn in as president, he launched a disastrous war on Iran that left hundreds of thousands of people dead, created untold hardship and destruction and ruined the country's economy. The even more devastating economic effects of the Gulf War of 1991 and the ensuing U.N. sanctions have overshadowed that somewhat, especially for the young people inside Iraq.

Sarar Ibrahim feels that she has been deprived of an important part of her life. "I have only known sanctions," says the 25-year-old employee at an import-export company. With her blond-highlighted hair and gaudy pink sweater, she is the very picture of a modern Iraqi girl. Sarar wanted to study English abroad and become a teacher but that was impossible, she says, because of the sanctions. "Nothing was possible, I have not had a normal life."

The Ibrahims live in a government quarter of gray concrete flats, near the ministries. Her father, Harith, works at the Ministry of Trade in a low-paid job. Before 1991, government salaries were decent and the area is actually still known as "upper-middle class." The flats look dilapidated now, and inside the homes, too, the effects of sanctions can be seen.

Harith, 55, sits in his pajamas on the couch and tells about life after 1991. "We had to sell the car, the jewels, even some furniture and art." The room looks a little bare, although the family, like most Iraqis, can still afford a television. "I sold so much and we used up everything," says Harith. "Now if something bad happens, for example a war, we don't have anything left to help us survive."

He does, however, put his daughter's complaints somewhat in context. He took his last trip abroad in 1975; in the early '80s the economy had already started to go bad. "The Iran-Iraq war swallowed up everything after 1980 for eight long years, with a lot of blood and destruction." That time, he tells his daughter, was even worse than now. Sarar says that she cannot stand the current tension; she even seems a bit disappointed that the crisis has not come to a head yet. "It's like reading a novel and it stops every time before the story reaches its climax."

On the outside, the Ibrahims are staunchly pro-government. To be anything else would, of course, be suicidal, especially since all visits by journalists to Iraqi homes are supervised by minders from the Ministry of Information. Still, even here some doubts about an Iraqi victory shine through. Sarar has many family members and friends who serve in the army. She confesses to being worried about them: "The Americans say that they will not hit civilians, but the army will definitely be a target and many may die." A little later she emphatically corrects her fatalistic remark: "The army is of course very well prepared to fight the enemy."

While regular people such as the Ibrahims don't have much of a choice but to remain at least outwardly loyal to the regime, one segment of society is clearly voting with its feet. The country's primitive stock exchange has been booming ever since the latest crisis broke out at the end of last year. The Baghdad Bourse, where prices are jotted down in red, blue and black on white marker boards, trades mostly in partly privatized government conglomerates.

"Compared to one month ago prices are up 15 per cent and we've been doing well all year," says stockbroker Hekmat Al-Tamimi. He and the other brokers sit at plastic tables in front of the boards, separated by a metal fence from the investors who shout their orders. He confidently ascribes the bullish mood to "the people's confidence in the country's leadership." From what most businessmen say, though, the opposite picture emerges. They are betting on a change in the regime, by means of war or otherwise, that will pump up the economy, especially if sanctions are lifted.

Saying so outright is, of course, impossible in Iraq. Any suggestion that the regime must go can place a person in danger. Businessman Faris El-Hadi will explain, though, why he is still investing in the stock exchange, at a time when the political situation is so uncertain. "If there is a war then whoever wins will have an interest in developing the economy afterwards," says El-Hadi in his modest office in downtown Baghdad. He invests in the industrial sector, construction materials, paints and chemicals. "No, I'm not afraid the chemical factories will be bombed," he laughs. "They don't make that kind of chemicals." He expects construction materials and paints do to well under any scenario, especially after a war.

Iraq's economists do not all share the investors' rosy outlook. "They are fooling themselves," says Humma Al-Shamaa, professor of economics at Baghdad University. "Prices at the exchange are going up purely because of psychological reasons; nobody can predict what will happen." He warns that continued sanctions will lead to a "disaster for the whole of humanity," as Iraq will turn into a "ticking bomb" of seething social problems. On the other hand, he does not have much confidence in the postwar scenarios that are being bandied about.

Al-Shamaa is particularly scathing about American plans to run the Iraqi economy after a possible war and sees no prospect of rapid economic development. "We need Iraqi solutions, not American ones," he scoffs. "Iraq is still a centrally planned economy, not at all like Germany and Japan after the Second World War."

Whatever the objections of Al-Shamaa, what is remarkable in Iraq today is that people are more or less openly speculating about a post-Saddam era. It is hard to know how the Iraqi leadership itself sees its prospect of survival. There was a lot of glee in Baghdad over last Friday's report by chief U.N. weapons inspector Hans Blix to the Security Council, and the council's refusal to sign off on American plans for an imminent invasion. Together with the mass demonstrations against a war all over the world, the developments at the U.N. were taken as at least offering a respite.

Abdel Razek Al-Hashemi is a senior member of the ruling Baath Party, advisor to the government and former ambassador to France. Talking in Baghdad this week, in a rambling, half-shouted monologue, he demanded to know how the U.S. could still attack Iraq now. Then he said bitterly: "Powell, that son of a bitch, was sitting there [in the Security Council] and said it was not about inspections but about disarmament. That bastard, how could he say that? To get 1441 he had said it was all about inspections. Of course it's not about either, it's about getting their hands on Iraq and its oil."

In Iraq, even though the U.S. is still acting through the U.N., it is clear to all that the agenda is not inspections but regime change. But it may be an easier matter to remove Saddam from power than to remove his images from the streets of Baghdad. He is everywhere: in huge posters on the sides of buildings and in countless statues, on horseback, with a gun, in uniform or in a suit.

Abbas Fathem Al-Hasimi is one of the people who is doing well by the president. His "advertising agency" is, outside as well as inside, covered with pictures of Saddam Hussein. He insists sales have been brisk throughout the crisis. "The president is the symbol of our country, everybody wants his picture." He sells all possible sizes and poses. "A farmer may buy this one," he says, pointing at a picture where the president seems to be tilling the soil, "and a restaurant that one where he is drinking water." While Al-Hasimi insists that selling the president's picture is only part of his business, he admits it brings in 70 per cent of his income.

Al-Hasimi and others selling pictures of Saddam Hussein will not be the only ones to be hurt if and when the regime falls. The Victory Leader's Museum itself carries testimony that regime change in Iraq has always been a violent business. The guide is particularly proud of one picture -- the bullet-riddled car of Iraq's first post-monarchy leader, Abdel Karim Kassem. "That was taken in 1959, after our president's attempt to kill Kassem, which unfortunately failed." Assuming that Iraqi politics have changed little since then, it seems unlikely that Saddam Hussein will go quietly.

The Iraqis are unlikely to rise up by themselves this time, though. They learned their lesson in 1991, when, after the Gulf War, the regime was able to reassert control over rebellions in the south and the north after the U.S. and its allies failed to support the uprisings. Says one businessman who knows Iraq well, "This time people will only come out of their homes when American troops march through Tahrir Square." What their attitude toward the Americans will be is unknown; much may depend on the fortunes of war. But that they will welcome change seems clear.