Savage with the truth

Michael Savage's right-wing bestseller is an ignorant, error-filled, Coulter-like screech of hatred against left-wing "traitors" and uppity women like Sandra Day O'Connor. Here's the funny part: This guy has a Ph.D.! 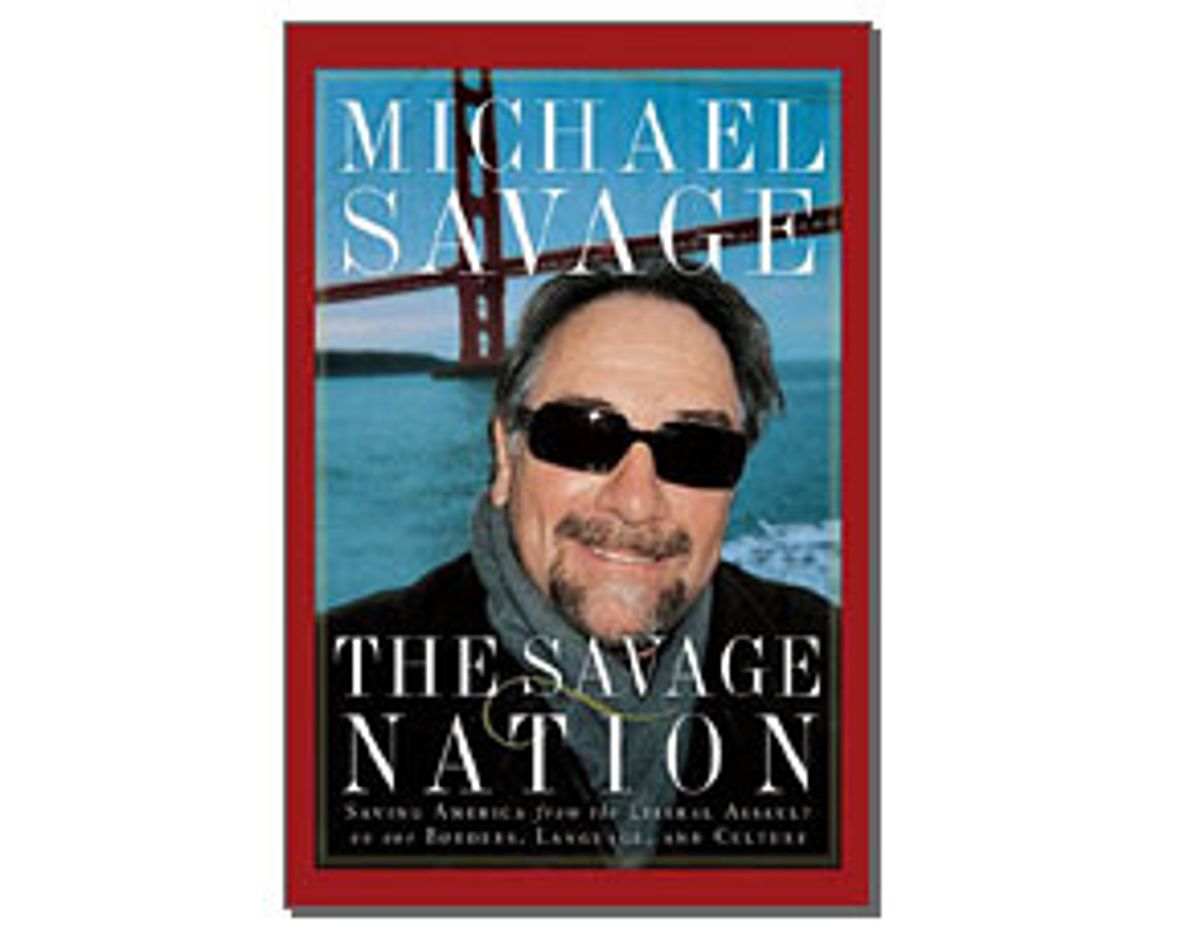 Conservative radio hosts have come to dominate the airwaves with ferocious rhetoric that's often filled with ad hominem attacks and blatant untruths, but Michael Savage is easily the worst of the bunch. Savage, who makes Rush Limbaugh look reasonable, isn't just a radio personality anymore. His book "The Savage Nation: Saving America From the Liberal Assault on Our Borders, Language and Culture" has reached the top of the New York Times bestseller list, and Savage has been rewarded with his own weekly MSNBC show as part of that struggling cable network's efforts to improve its ratings.

Criticizing the rhetoric on Savage's radio show, which has about 5 million listeners and airs on over 300 stations, is a relatively easy task, as evidenced last week when MSNBC announced Savage's new show. The liberal media watchdog group FAIR, for instance, immediately responded with a press release pointing out that Savage often refers to Third World nations as "turd world nations." In addition, Savage has said the U.S. "is being taken over by the freaks, the cripples, the perverts and the mental defectives," and said of poor immigrants, "You open the door to them, and the next thing you know, they are defecating on your country and breeding out of control."

But there's more to Savage than the sum of his hateful quotes. Known before his radio career began as Michael A. Weiner, he's also an ethnobotanist with a Ph.D. from the University of California who wrote a number of books about natural healing and nutritional supplements with titles like "Herbs That Heal." Savage became an author after he failed to get an academic position, a result he blames in his book on affirmative action and his status as a white male: "For here I was, a 'manchild in the promised land,' denied my birthright for matters of race."

In 1995, in the aftermath of the Republican takeover of Congress, which many credited to Limbaugh and other conservative talk radio hosts, Savage launched his show on San Francisco talk station KSFO, eventually landing a national syndication deal and becoming, according to Talkers magazine, the fifth most popular talk-radio host in the country.

It's worth noting, however, that Savage attempted to return to academia in 1996, when he applied to be dean of U.C. Berkeley's School of Journalism based on less than two years of experience in radio and his Ph.D. in epidemiology and nutrition science. When he wasn't granted an interview, Savage filed a lawsuit that, unsurprisingly, didn't go anywhere.

Unlike Limbaugh and the increasingly popular Sean Hannity, Savage spends little time in his book praising President Bush or the Republican Party, or spreading false tropes that circulate in the conservative media. Unlike Hannity's "Let Freedom Ring," for example, which often reads like a collection of Republican talking points, "The Savage Nation" is an almost unreadable amalgamation of virulent attacks on liberals, feminism, Islam and gays. It wouldn't be much of a surprise if people like MSNBC president Erik Sorenson, who called Savage "brash, passionate and smart" in a press release, haven't actually opened the book.

If Sorenson did read "The Savage Nation," one has to wonder what he thought of Savage's description of MSNBC correspondent Ashleigh Banfield, whom he calls "the mind slut with a big pair of glasses that they sent to Afghanistan," adding, "She looks like she went from porno into reporting." Those aren't the only kind words Savage has for successful women, though. "Today in America," he writes, "we have a 'she-ocracy' where a minority of feminist zealots rule the culture." In Savage's mind, this "she-ocracy" includes not only the usual conservative targets like Sens. Hillary Clinton and Barbara Boxer, but even right-leaning Supreme Court Justice Sandra Day O'Connor, a Reagan appointee.

One can only hope Sorenson didn't refer to Savage as "smart" based on his insights into the fight against terrorism or, as he calls those who took down the World Trade Center, "pirates in filthy nightshirts." Savage states flat out in his book what several mainstream conservative commentators, like Hannity, have only dared to hint -- that American liberals are a threat equal to terrorists. "To fight only the al-Qaida scum is to miss the terrorist network operating within our own borders," he states. "Who are these traitors? Every rotten radical left-winger in this country, that's who."

Lest one think Savage is only talking about the truly radical left, he makes clear that he includes most Democratic leaders and center-left foreign leaders on that list. Former President Bill Clinton, Senate Minority Leader Tom Daschle, German Chancellor Gerhard Schröder and British Prime Minister Tony Blair are all "New World Order Socialists" to Savage, with Blair earning the extra moniker of "Third Way Führer Blair."

Savage's rants against liberals also occasionally include the obsession of radical right-wingers with a one-world government. "[The liberal agenda] is all about one oppressive central government ruling the whole world," he says. "This is the utopia the left has in mind for us." Savage is fiercely bipartisan when it comes to one-world government, though, adding later on, "I've said for a long time that we have a 'Republicrat' or 'Demican' oligarchy in America and that most of our politicians are pawns controlled by their one-world puppet masters behind the scenes."

Most of the book consists of fact-free rants such as these; "The Savage Nation" doesn't bother with notes, and doesn't even have an index. Like Ann Coulter, Michael Moore and Hannity, when Savage does bother with facts, he often gets them wrong. He says that "the divorce rate has doubled since 1970," but according to federal statistics, while the divorce rate was 3.5 per 1,000 people in 1970, it never came close to doubling, and was 4.7 in 2000.

Using a study by Tokyo University scientists as data, Savage mocks former Vice President Al Gore's efforts "to combat the evils of global warming and the ozone depletion [sic]" and asks "Why won't Al, the global warming bogeyman, back down?" That study, however, found only that the ozone hole in the Southern Hemisphere would heal itself by 2040 thanks in part to regulatory controls of CFCs and other chemicals. Savage, whose biography calls him an "ardent conservationist," seems unaware that ozone depletion and global warming are in fact separate phenomena.

As part of an attack on the use of Ritalin by children, Savage quotes then-first lady Hillary Clinton at a White House conference calling the drug "a godsend for emotional and behavioral problems for both children and their parents." He fails to mention, however, Clinton's next comment: "We do have to ask some serious questions about the use of prescription drugs in all children ... What about the effects on our very youngest children who haven't been tested for these prescription drugs and whose brains are in their most critical stages of development?" Hardly the words of someone who, as Savage alleges, is "calling Ritalin a miracle drug."

Just how does a book like this get published? The answer can be found on a network of conservative Web sites. "The Savage Nation" is one of the first books published by WND Books, a partnership between the conservative site WorldNetDaily and Thomas Nelson, a publisher of Christian books. All WND books are not only heavily publicized on WorldNetDaily but also made available for sale there first, giving direct access to a loyal audience most authors would kill for.

Much of Savage's content, meanwhile, can be traced directly to columns he published on the conservative site NewsMax.com. The book itself is divided into two- to four-page sections, many of which are near-exact replicas of Savage's NewsMax columns with the same name. Most of the content in the book, in fact, can be found in the columns archived on this page. Of course, there's nothing wrong with collecting a series of columns into a book. It's noteworthy, however, that Savage doesn't tell his readers they're primarily reading recycled material, and it's revealing that a book containing so many errors is primarily a cut-and-paste job.

The easiest response to all of this, of course, is one that Savage himself partially makes early in his book: "Comedy is what I sometimes do." Does taking Michael Savage seriously play right into his hands? It's certainly important to point out the hypocrisy of a bestselling author who says of himself, "I want to elevate the dialogue, if I can, to some level that's civil."

More fundamentally, in a world where people like Savage are rewarded with their own shows on a major cable news channel, close scrutiny is absolutely necessary. Either MSNBC executives have listened to Savage's show and read his book and believe his brand of vitriol and distortions make him, as Sorenson said, "brash, passionate and smart," or they don't care about anything other than his ratings and his book sales. Either way, they have a lot to explain. Michael Savage may be one small step up in the ratings for MSNBC, but he's one giant leap down for our political discourse.