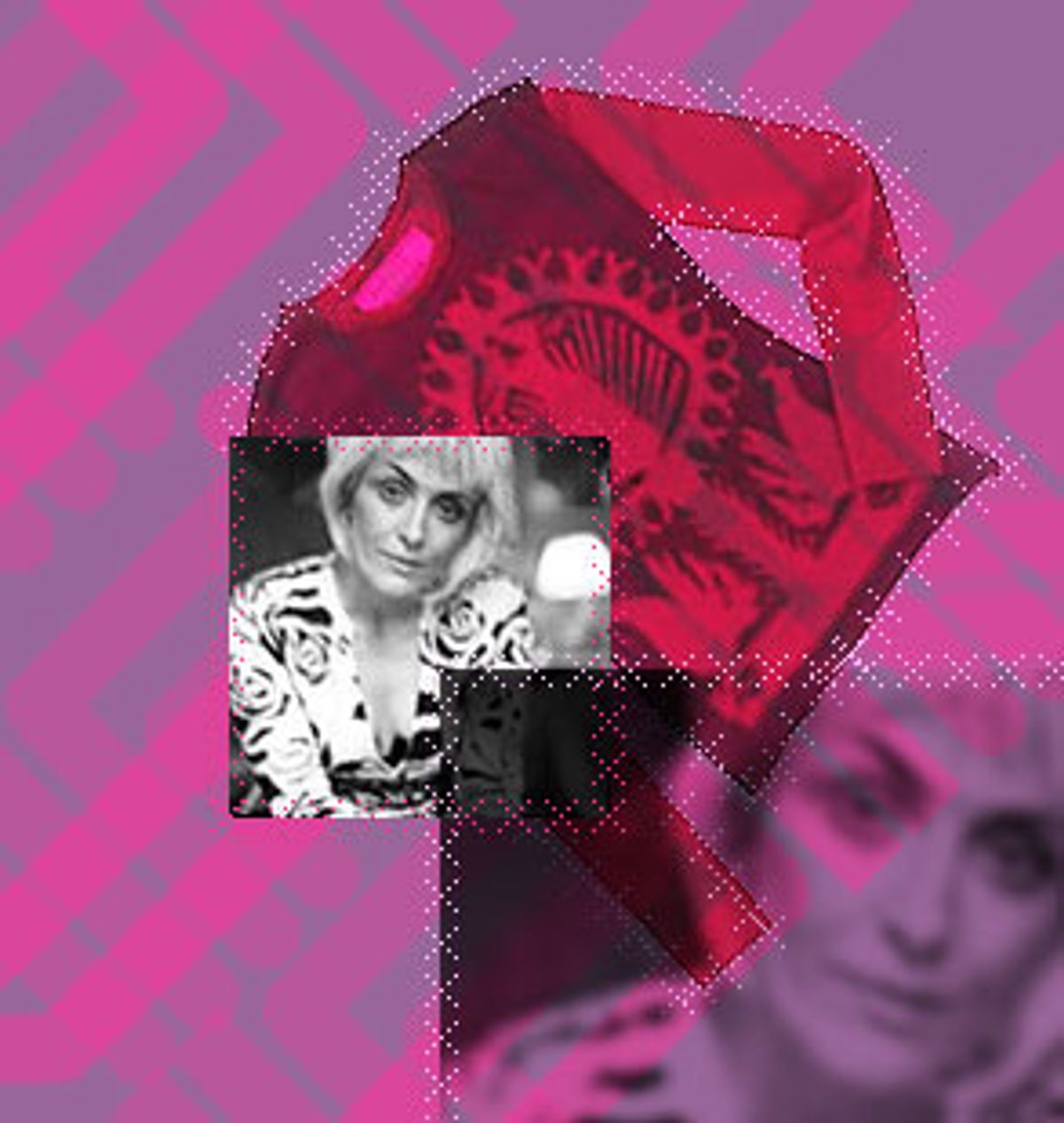 Natalie Chanin has spent more time than usual at the Whitney Museum of Art this winter.

It's "The Quilts of Gee's Bend" that's drawn her uptown, a collection of 60 quilts produced by a group of dirt-poor Alabama women who sewed together for 70 years from 1930 to 2000.

Like the other patrons, Chanin gets up close to the quilts. The patterns range from the strikingly symmetrical to the whimsically circular. Not one is uniform in shape or size. You can feel the human hands behind the quirky irregularities and the peculiar fabric selections. There are denims, corduroy, polyester blends of palm trees, striped wool, worsted cotton.

And Chanin is thrilled, once again, over how disparate, throwaway pieces of fabric sewn together can create something so whole, so pleasing.

On Valentines Day, the final day of New York's Fashion Week 2003, about 40 blocks south of the Whitney, the Alabama Project, an underground chic fashion house -- which is the best kind of chic -- is getting underway. There are anxious-looking assistants in headsets with clipboards, reed-thin models, paparazzi.

The clothes on show, which sell for between $300 and $4,000 at places like Barneys, Maxfield and Jeffrey New York, are handmade from old T-shirts bought in bulk from thrift stores and sewn by women who look like they'd be more comfortable at Wal-Mart than Bloomingdale's. They sit in circles on their porches or in their living rooms sewing together disparate, throwaway pieces of fabric, just like the ladies of Gee's Bend.

The clothes are exquisite. They're rough, intricate, bright. Each garment has an outer layer of soft cotton jersey with patterned cutouts revealing a different-toned jersey sewn from inside, in what's called a reverse appliqué. Thread-ends halo the appliqués, and are reminiscent of the tufts of yarn that protrude from so many quilt tops. The clothes are somehow both challengingly original and comforting.

Chanin, or Alabama, as everyone in the fashion world calls her, was born in the tiny town of Lovelace Crossroads, Ala., population 60, just outside the city of Florence, a four-hour drive from Gee's Bend. She had a baby boy, Zachariah, when she was 20, studied textile design in North Carolina, and then got as far away from Lovelace Crossroads as she could.

After 10 years in Vienna, Austria, where she worked as a costume designer, she returned to the States, taking a room at the Chelsea Hotel in New York. Alabama, 41, who resembles a 1940s heroine with her weathered good looks of high cheekbones, deep-set eyes and platinum hair, soon started hand-making T-shirts for herself and her friends. She realized that she was using the old sewing techniques her grandmother had taught her, fancy stitches like the herringbone, the snail trail, and the feather. What she was producing reminded her of the quilts that had come out of her grandmother's sewing circle.

She'd been wanting to ramp up production and start selling the shirts to more than just a few friends. There was no way she could afford to have them made in New York, however. Although she hadn't lived there in 22 years, she knew where to go. To make her clothes she would have to reinstate the sewing circle back home in Lovelace Crossing.

The party takes place at the Bowlmor Lanes bowling alley in Greenwich Village. This being underground fashion, the models -- young girls, old women, muscle-bound men, skinny men -- are cavorting about on the bowling lanes instead of a catwalk. They're all wearing bowling shoes. The head waitress from the 2nd Ave. Deli is one of the models. She must be 70 years old. She stares, deadpan, into the popping of the fashion press's bulbs, in a deep-red jacket with red cutouts, her beehive intact. An Asian girl with a shaved head and a chest as narrow as a boy's dances to Sir Mix-A-Lot, and flashes the ice-pink Alabama short shorts she's got on under her dress to the jostling press corps.

The party doesn't have quite the hoopla factor of some Fashion Week parties -- "It" boy of the moment, Zac Posen, for example, is across town at the Four Seasons dancing on a bed of Swarovski crystals -- but it's got its own offbeat thing going on. The place is packed, the music is loud, the press is everywhere, the guests are gorgeous. Isaac Mizrahi is answering questions while cameras flash. Debby Harry holds court on Lane 4.

The clothes on display -- this is Alabama's sixth season -- are mostly T-shirts, fitted to the body and often beaded as well. This season the colors are ice blue, ice pink and double-dyed navy, as well as the company's signature color, "Alabama Red." Besides T-shirts, there are corsets, with tiny hooks and eyes up the back, three-quarter coats, long skirts. For men, there are tight-fitting, long-sleeved T-shirts, patterned with skull and crossbones, bull horns and old Chevy cars.

Each piece, not surprisingly considering their origins, is as comfortable as your favorite old, worn-soft shirt. Project Alabama uses the techniques of the time-honored Southern sewing circle, and her motifs -- flowers, snowflakes, eagles and hearts -- certainly play on being old-fashioned; but the clothes are far too individualistic to be quaint. There's a bit of a punk aesthetic thrown in. They seem as if they were made by someone with a great sense of humor.

When Alabama returned home in December 2000 she rented a three-bedroom ranch-style house to use as an office. (Lovelace Crossroads is a verysmall town: Her landlord is her aunt.) From the back windows, Alabama can see the home where she grew up. When she was a child, Florence was a city of textile workers, but those jobs have gone to Mexico, decimating the town's economy.

When Alabama put the word out that she was looking for women to form sewing circles for a new clothing company, she had 150 replies within three weeks. The women who poured in, like Alabama herself, had grown up sewing with their moms, grandmas, aunts and cousins. Florence was never a rich city, and every scrap of fabric that fell to the floor from one pattern was held onto and used for another. Scraps weren't waste, but rather an excuse to tell a story to the lady beside you as you cross-stitched it into a quilt.

Today, Alabama has 120 women working for her, from ambitious 18-year-olds to 75-year-olds earning spending money. (She pays as much as $15 an hour.) What they all have in common is a culture of sewing. They come to the three-bedroom house and pick up the patterns and appliqués, and they form sewing circles that produce the shirts and skirts and little corsets that make New York's fashion elite ooh and aah one cold Valentine's Day during Fashion Week.

Diane Hall, Alabama's master seamstress, is up from Florence for the show. She refers to the ways of the sewing circle as a "dying art." She sits in the back room where the "girls" change, her eyes, framed by metal-rimmed glasses, fixed on the fabric in her hands. Compared to the giggling models flitting about her, Diane is a bastion of steadiness. Even as she answers questions, even as the mayhem around her escalates, her eyes stay focused on her needle as it sews a fabric star onto a bustle. Diane was a seamstress for 30 years before business got so bad she gave it up and went to work at a travel agency. Sewing was so much a part of her growing up, though, that she remembers how old she was the first time she bought a store-bought dress: 18. As soon as she saw Alabama's clothes, she knew it was time to pick up her needle again. "If you sew and you see something like this," she says, gesturing with her fabric to the rack of models' outfits, "you know how much work went into it. You know how special it is."

As for the dizzying heights of New York's Fashion Week, Diane is unfazed. The people aren't so friendly, but what can you expect in such a big town.

One thing Alabama is coming to expect, or at least appreciate, is the admiration this big town has for her work. The Alabama Project has yet to make a profit -- making it as a small fashion house is about as hard as hitting a 95-mile-an-hour fastball -- but it did break even last year, bringing in around $1 million in sales. And the following she's attracted is cultlike and growing. Cindy Crawford is a fan. So is Woody Harrelson. Alabama now sells in more than 52 stores in nine countries.

Project Alabama pieces are not only beautiful -- every show during Fashion Week contained beauty -- but also oddly unique and personal. And one has to assume that at least part of what makes a curator see art in a poor person's blanket is the search for the unique and the personal in an age when so much seems generic and indifferent.

"It's a disjointed time," Alabama says in her lovely drawl, "and a quilt is taking disjointed pieces and putting them back together into something beautiful. That's a comforting thing these days."

Heather Chaplin is currently working on a book about video-game culture for Algonquin.