Despite the battered grandeur of Kurt Russell, this fable of rotten cops in Rodney King's L.A. is mostly macho posturing. 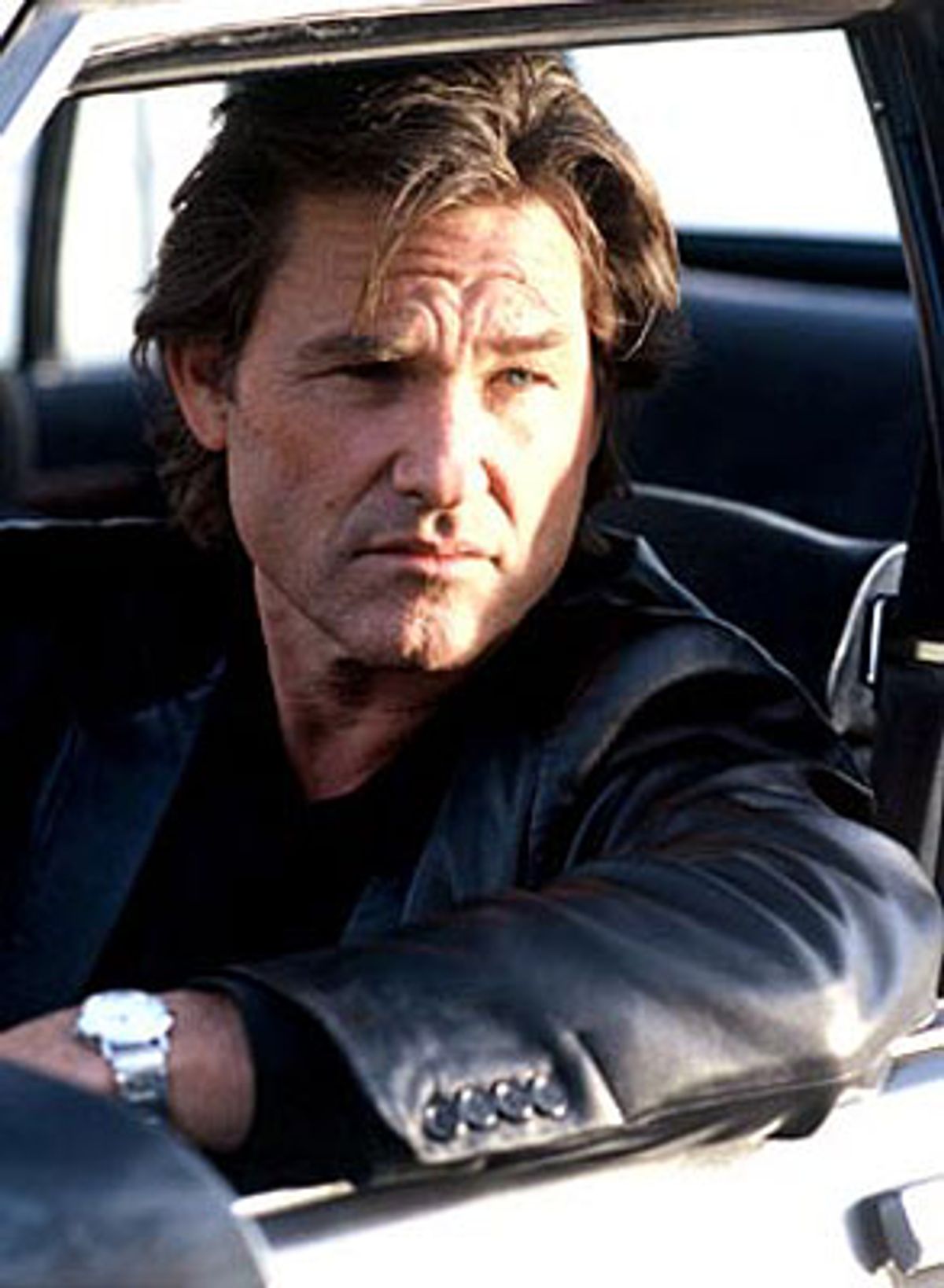 "I'm slow but I get there," says Kurt Russell toward the end of "Dark Blue." The sad thing is, as a movie star, Russell has never quite gotten there. It's certainly not for lack of talent or charisma or looks. If there were any justice in the movies, Kurt Russell would long ago have become one of our biggest male stars.

The dark neurotic quality that you associate with actors like Al Pacino and Robert De Niro has never been part of Russell's approach. He's in a tradition of leading men like William Holden and Dana Andrews, actors who can play complicated, even tormented, characters while still seeming like regular guys. You could see that in Russell's last starring role, "Breakdown." The movie was a tight, tense little thriller, and much of the tension came from the look of desperation that Russell sustains throughout. The sweat running down his face might as well have been running down yours.

The sheer range -- and consistency -- of Russell's work is impressive. On TV he's convincingly played both the University of Texas sniper Charles Whitman and, in John Carpenter's biopic, Elvis Presley. In the movies he showed a sly, lowdown sense of comedy in Robert Zemeckis' "Used Cars." He gave a very different sort of comic performance in "The Best of Times." Playing a former high-school football star still basking in his long-gone glory days, Russell, who tried his hand at professional baseball, has a sweet, jockish mournfulness, the sadness of a guy who deep down knew he was never going to be the hotshot he had once been.

His best work came in Robert Towne's romantic noir "Tequila Sunrise," as a detective torn between his dedication to his job and his loyalty to his best friend, a drug dealer, played by Mel Gibson. When both men fall in love with Michelle Pfeiffer, Russell nails the masculine vulnerability that was always Holden's specialty. Had "Tequila Sunrise" been a '40s movie, we might now talk about Russell's work in it with the same affection we hold for Dana Andrews in "Laura."

Russell rarely gets starring roles. So I was anxious to see him in "Dark Blue" and eager to see what director Ron Shelton, who may be better than any other current director at bringing out the vulnerability inside masculinity, would do with him. In "Dark Blue" Russell plays Eldon Perry, the head of an elite team of Los Angeles street cops. "Dark Blue" is set in 1992, in the four days leading up to the riots prompted by the acquittal of the cops who beat Rodney King. Written by David Ayer (who wrote "Training Day," from which the script borrows heavily) from a story by James Ellroy, "Dark Blue" takes the racism of the LAPD as a given. The cliché in stories about dirty cops is that they've been corrupted by the horrors they've seen. "Dark Blue" doesn't assume that about Eldon or the higher-ups in the force who protect him. Here, the racism among the cops is endemic.

When the movie starts, Eldon's new partner Bobby (Scott Speedman) is exonerated by a police review board for using deadly force in a street shooting. There's no question that he will be. The board exists to rubber-stamp whatever the cops in the streets deem necessary. And as Eldon speaks in his partner's defense, he doesn't even offer the pretense of respect. He resents his actions being questioned, especially by the one board member who doesn't buy his explanations, Arthur Holland (Ving Rhames), an assistant chief who is also the only black member on the board.

"Dark Blue" follows what happens when Eldon and Bobby, back on the street, are assigned to investigate an especially vicious convenience store robbery that resulted in multiple murders. They figure out who the culprits are pretty soon but are told to lay off by the head of their squad, Jack van Meter (Brendan Gleeson), who also happens to be Bobby's uncle. The perps (played by Kurupt and Dash Mihok) are van Meter's snitches, and Eldon is more than willing to go along with his boss's instructions to pin the murders on someone else. Bobby can't quite stomach this, and things are complicated by the fact that the cop he's sleeping with (Michael Michele, who is not only lovely but who acts with an affecting gravity) is Holland's assistant. Holland, who aspires to the police chief's job, has vowed to prove that Eldon and Bobby are corrupt.

Inevitably, "Dark Blue" is about how Eldon reaches a point where he can no longer countenance the brutality and coverups he's always accepted. Russell does everything he can not to play that journey as some phony awakening of consciousness. Eldon isn't cleansed or redeemed by his experience; he's too deep in the dirt for that. Maybe one of the reasons Russell is not a bigger star is that he doesn't have a star's instinct for preserving his likability. He doesn't do a damn thing to soften Eldon's racism or make him more sympathetic. There's a special revulsion you feel for the corruption of someone who, even in middle age, has the all-American boyishness of Kurt Russell. The racism and profanity he spews is particularly ugly in a way it wouldn't be coming from an actor who was more traditionally hardened. He swats away any glimmers of conscience or vulnerability as if they were flies buzzing around his head. It's a gutsy, entirely believable performance.

But the movie isn't up to the standard of Russell's acting. I haven't read the James Ellroy story that Ayer's script is based on, but the movie is loaded down with the braggadocio that's present in everything I have read by Ellroy. "Dark Blue" is a movie with hard-headed liberal intentions, a muckraking melodrama about the murderous racism of one of the country's largest police forces. But it's been made in a reactionary macho style that wants to rub our nose in that violence and corruption and bigotry, not to expose it but to see if we're tough enough to take it.

There's a thin line between crime fiction and police thrillers that refuse to offer their characters a phony redemption and ones that are telling us, "It's all shit." That's Ellroy's territory. Compared with what's being done in the crime fiction genre by writers as varied as Ian Rankin, Michael Connelly, George Pelecanos, Val McDermid and others, Ellroy's is kid stuff, pulp that aims to be a mighty oak. He has never been able to disguise the kick he gets from the racism, misogyny and homophobia of his characters. This, his writing tells us, is the dirty truth we're too refined to hear, and he's going to be the truth teller who shovels it down our throats (as when he told Interview magazine that the blues was just "black men whining").

Ellroy's scummy sensibility hangs over this movie. What could have been an admirable refusal to give into some of the usual cop-movie clichés is drowned out by the loud clanking of the movie's big brass balls. It would have been false for "Dark Blue" to paint the killers that cops like Eldon and Bobby encounter as solely victims of LAPD brutality. It would have been equally false to make the crusading black cop determined to clean up his department a squeaky-clean credit to his race. The movie isn't blind to the political ambitions of Ving Rhames' Holland. He announces at a black church that he intends to become police chief, and the movie parodies the way he slips into the cadences of a black preacher in his public pronouncements. But the satirical intent of those scenes falls flat, and we're left feeling that our choice is between the Neanderthals on one side and the hypocritical careerists on the other.

Shelton has directed "Dark Blue" in a jacked-up urban thriller style that simply does not play to his gifts. He's a sidewinder, the sort of writer-director who tells his stories through loopy character details and anecdotes. That's what comes through in movies like "Bull Durham" and "Tin Cup," and also in his best movie, the shamefully neglected "Cobb," a picture that may be the truest spiritual descendant of "The Wild Bunch" in American movies. An alarming crudity was at work in Shelton's last movie, "Play It to the Bone," as if he had to debase his comic gifts in order to make his work accessible to audiences used to obviousness and crassness.

The convenience-store murders near the beginning of "Dark Blue" have that same sort of crudeness. It's the opposite of what Carl Franklin did in the horrifying opening of "One False Move," where the violence of the scene imprinted itself on our minds in such a way that he didn't need to show us anything nearly as shocking for the rest of the movie. When Kurupt and Mihok drag murdered customers across the floor of the convenience store, so we see big red smears of their blood, it's more showy than anything else. It's no different from the moments in vigilante movies that have to set up the rottenness of the villains so we're howling to see them brought down.

The most satisfying part of "Dark Blue" is the way all the strands come together just as the verdicts are announced in the King beating case and L.A. erupts. It's a clever bit of narrative engineering. Shelton does his best work in the riot scenes. Most directors would have used that event as a chance to show us masses of rioting hordes. Instead we watch the various characters making their way through smoke-choked streets, while out of the smoke emerge figures carting away television sets and household goods. It's ragtag and uncertain instead of overt anarchy, and it's a good measure of Shelton's ability to approach his material from an unexpected angle.

It's followed, though, by Eldon's public mea culpa. Shelton and Russell do their damnedest to make this scene work. But for it to work it would need to be a lot quieter, a lot more tentative than it is. We'd have to see Eldon beginning to piece together why he is the way he is, and perhaps resisting the truth, instead of the full-scale psychoanalysis of his character that Russell offers up. The movie doesn't provide any assurances that good cops will now triumph. But the breast-beating of this scene is a false catharsis.

It gives me no pleasure to write this about Ron Shelton, who remains an underappreciated director and whose past movies have given me much pleasure. He's a filmmaker who needs to go his own way. His specialty has always been the comedy of slightly abashed masculinity. He doesn't belong in the company of blowhards.