"The Life of David Gale"

Does Kevin Spacey have a weird secret? Um, yeah, as always. But this death-penalty fable is so overwrought, no one will care. 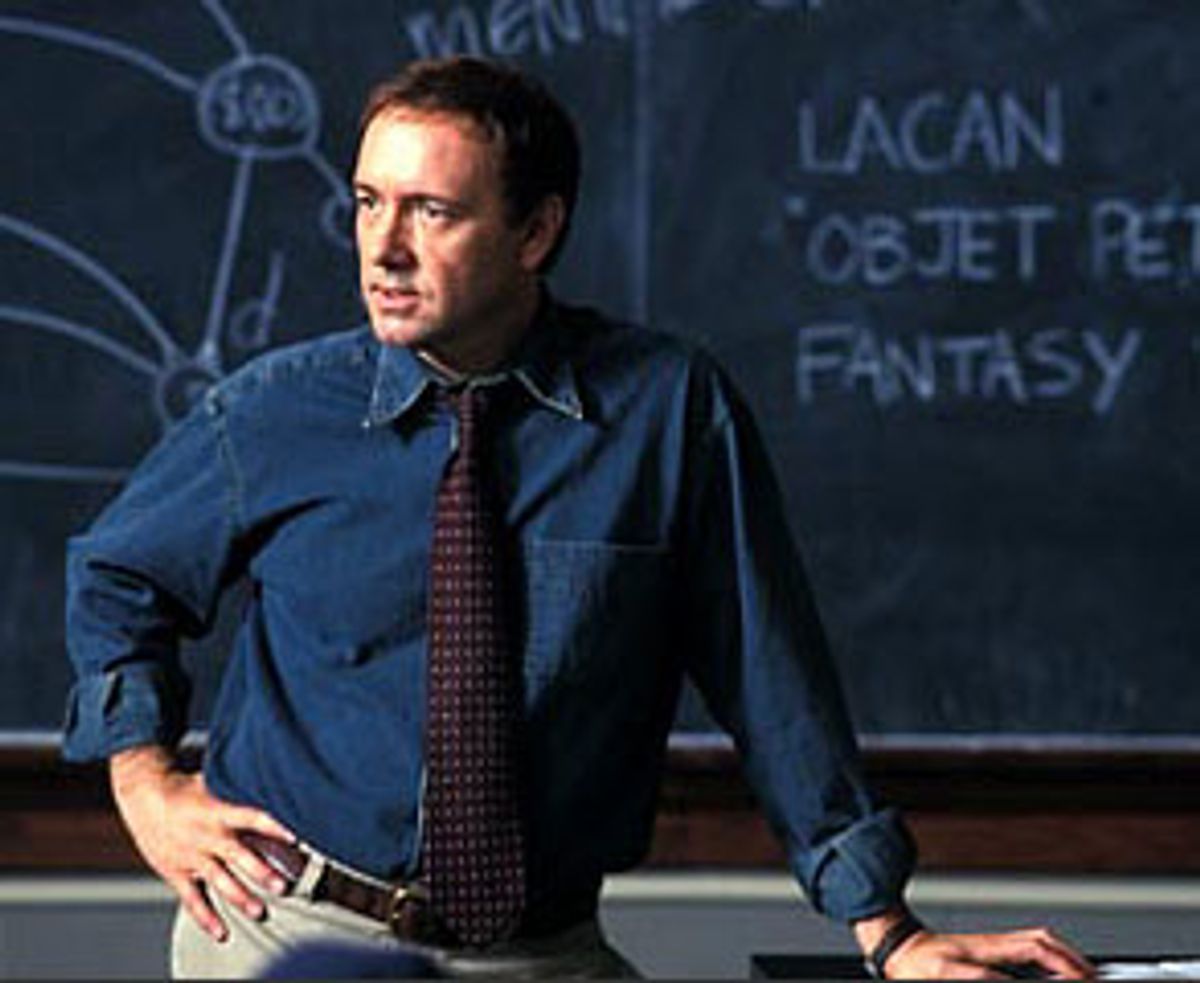 Alan Parker's "Life of David Gale" becomes more and more preposterous with each scene -- it's almost like performance art. Kevin Spacey is David Gale, a smarty-pants University of Texas professor who is also an anti-death-penalty activist. Somehow (and good luck figuring out how any jury could possibly convict him on the evidence as the movie presents it) he has been convicted of the rape and murder of his close friend and colleague Constance Hallaway (Laura Linney), a fellow abolitionist, and sentenced to death.

Kate Winslet is Bitsey Bloom (!), a hotshot newsmagazine reporter who, at Gale's request, has traveled to Texas to interview him during the last three days before his execution (a privilege for which he charged her employers half a million dollars -- which, of course, they paid in cash, as most newsmagazines in real life are all too happy to do).

Torn between making an ideological screed and a straight-ahead thriller -- perhaps believing, rightly, that an audience would reject the former -- Parker fiddle-faddles between the two and comes up with next to nothing. The movie's predictability or lack thereof isn't really the issue: At times you're really not sure where the story (the script was perpetrated by Charles Randolph) is going to take you. But you just may not care. The coincidences and red herrings pile up to the point where all you can do is start shifting them around with a giant shovel, which is exactly what Parker does.

A mysterious man in a cowboy hat shadows Bitsey and her young assistant, Zack (Gabriel Mann), on the dusty roads of Texas. What is he after? Even at the end of the movie, when his identity is fully revealed, you may not be so sure. Early in the movie, a "Get Thee to a Mechanic, Pronto" light flashes on Bitsey and Zack's rental car and they ignore it -- a highly significant plot point, because without it, the car wouldn't break down at a tense and crucial moment, as it inevitably does.

A mysterious videotape, ostensibly a record of the murder, is left in Bitsey's motel room, ostensibly to throw her off the track, but clearly more to throw us off the track. And there's more, but that's probably enough. What may be even more distressing about "The Life of David Gale" is the way it takes a serious issue -- the morality of the death penalty -- and stacks its points in such clumsy and obvious ways. The official who welcomes Bitsey to the prison where the execution is to take place -- a smooth-talking Southerner, natch -- condescendingly asks her whether she prefers to be addressed as "Miss, Ms. or Mrs." When she tells him "Bitsey" is fine, he proceeds to call her "Bitsey-girl." That's pro-death-penalty people for you! (You half expect him to say, "You little yellow rose -- I'd like to waltz you clear across Texas!")

As Gale tells his story to Bitsey, clearly arranging it in a way that serves his own goals, we see his version of the truth unfold. In one of those flashbacks, Gale appears on a TV talk show with the governor of Texas, another pro-death-penalty monster, who quotes liberally from the Bible and says things along the lines of "I hate killin' and I'll kill people to stop it." Gale (who's so brilliant that he needs to refer to index cards) asks him, "Would you agree with the statement, 'A healthy society will stop at nothing to cleanse itself of evil'?" When the governor responds that yes (or maybe it's more like "yay-us"), he would, Gale comes back with the clincher: "That quote is from Adolf Hitler!"

Hoo-doggy, that Gale is a pistol, and he's probably seen "Billy Jack" once or twice, too, since the same cheap device was used in that movie. While it's extremely convenient to set up Southern Republicans as pro-death penalty goons, Parker could have made his case much more effectively by giving us real people instead of stereotypes (especially considering it's usually the real people you have to watch out for).

There's a good reason the story is set in Texas, given its execution record; that's an obvious slam against our current president, who ruled his former state with an iron fist (pretty much the same way he's now trying to rule all 50). But beyond that, Parker is overly simplistic in setting up the death penalty battle as a case of bleeding-heart liberals against hardcore Republicans: If that's the argument you want to make, then George Ryan, the Republican former governor of Illinois who suspended all death penalty cases in his state indefinitely, sure throws a wrench into the works.

Parker wants to explore significant social issues and he wants to build a mood of deep suspense, but he's lousy at both. By the time Bitsey puts a plastic bag over her head to re-create the crime scene, you know Parker has really gone off the deep end. And when one of the movie's pivotal characters cries real tears at the opera, ostensibly stunned by the way art mirrors the reality he himself has lived through, it's time to throw in the towel. It's bad enough that we have to suffer through Parker's cheapie exploitation of potent political ideas; do we have to suffer opera abuse too?

Winslet gives the best performance here, and it's all the more miraculous considering the ludicrous events that swirl around her character. She always feels grounded and solid; her acting is very serious in a movie that simply isn't. Spacey turns in the now patented Kevin Spacey performance. As the imprisoned Gale, he's the cat who ate the canary: He's got a secret, but he's not telling. He only wants us to think he's telling. Clever! As the earlier Gale of the flashbacks, Spacey is a troubled husband and dad whose life veers out of control, and the way Spacey clutches that whiskey bottle, believe you me, you feel his pain.

Spacey has been, and will again be (or so I believe), a wonderful actor. But "The Life of David Gale" is the wrong vehicle for him, and not just because it's the wrong vehicle for just about anyone. Once again, Spacey plays a character who's guarded, mischievously intelligent and a little bit creepy, in precisely the same way he's been doing it for more than 10 years now. It's time for him to cough up that canary once and for all.