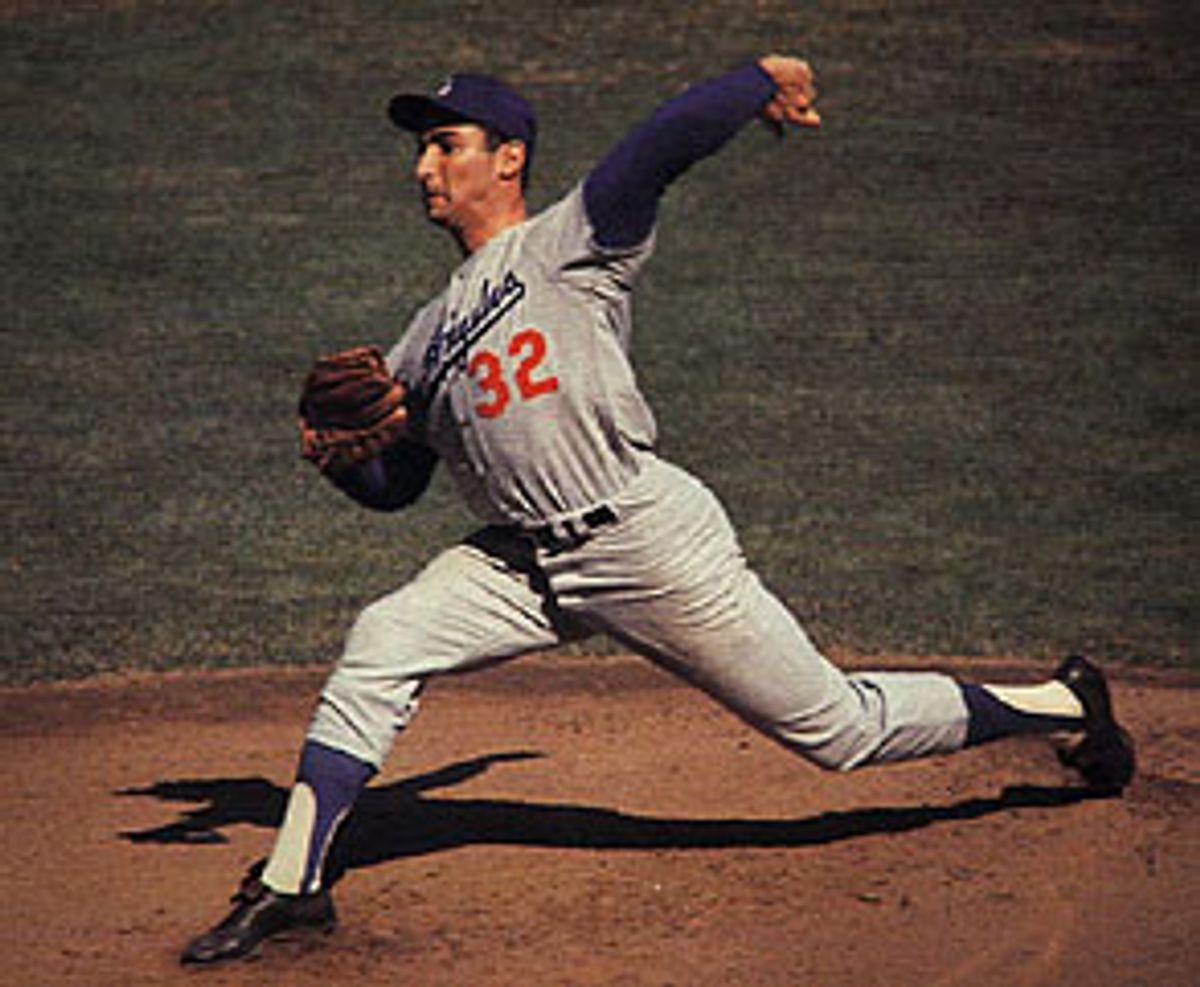 Most of us have learned to simply accept the fact that Rupert Murdoch's News Corp. exists in the world, just as we've come to accept that there are terrorists among us, as well as people who scam grandmothers out of their savings.

And then every once in a while the News Corp. will do something so rapacious, so pathetic, that one has to stand up and say no more, to call for legal and moral measures to stop it, even if all gestures prove futile.

The latest, final line crossed? In December, News Corp.'s scandal sheet, the New York Post, reported in its Page Six gossip column that an unnamed baseball Hall of Famer had been blackmailed into cooperating with a best-selling biography about him -- blackmailed under threat that the unnamed woman writer would otherwise claim the Hall of Famer was gay. At the time, the blind item got almost no attention.

Now, as it turns out, Sandy Koufax, the Los Angeles Dodgers' Hall of Famer, is the subject of the only recent best-selling baseball biography written by a woman (Jane Leavy's "Sandy Koufax: A Lefty's Legacy"). It also turns out that Koufax has quit as a special instructor for the Dodgers because the team is also owned by the News Corp.

The Post's blind item ran Dec. 19, but it was virtually unknown among legitimate sports media outlets until news leaked out about Koufax's resignation. And Koufax's resignation -- after 48 years as a Dodgers pitcher, minor league coach, spring instructor and unofficial pitching guru -- apparently took place over a month ago. Yet it was not discovered until this week, when sportswriters arriving from Los Angeles for the Dodgers' annual spring training in Vero Beach, Fla., asked where the Hall of Famer was. The team revealed that Koufax told Dodgers senior vice president Derrick Hall that "it does not make sense for me to promote any" of Murdoch's companies, and that he would "feel foolish to be associated with or promote one entity if it helps another," according to the Los Angeles Times.

Koufax has long been one of sports' truest enigmas. After two years as a little-used "bonus baby" with the Brooklyn Dodgers, and four more as an often brilliant, often lost starting pitcher with the team, he turned, seemingly overnight, into the most dominant left-hander baseball has ever seen. He broke all extant strikeout records, threw a no-hitter every year from 1962 through 1965, and in the last six seasons of his career won 111 games and lost only 34. His retirement at the age of 31 -- as abrupt as his transformation into an unhittable pitcher -- only added to the legend.

The childhood friend of an extraordinary array of Brooklyn characters running the gamut from Larry King to current New York Mets owner Fred Wilpon, Koufax was married twice, the most recent union ending in divorce about five years ago. For her part, author Leavy denies both the Post's insinuations about the blackmail and Koufax's sexuality. In fact, what's interesting is that so far, Koufax's sexuality is the McGuffin in this story. The not-so-blind Post item may as well have been about his actually having been a gentile all these years (Koufax was an observant Jew who refused to pitch on Yom Kippur). The point is the News Corp.'s journalistic and ethical malfeasance, and this time around, reporters seem to get that.

It is the New York Post, of course, that published another piece of homophobic baseball gossip last spring that led the New York Mets' Mike Piazza to feel he had to publicly announce he was not gay. Besides the Post, the News Corp. also owns Fox Television, Fox News Channel, and other companies that produce products structurally similar to "news."

And in what is perhaps the most subtle twist of this serrated knife, the News Corp. also owns HarperCollins -- the company that published the biography about Koufax in the first place.

Read the Post's December item about the "Hall of Fame baseball hero," then, in that context. Koufax, the Post wrote, "cooperated with a best-selling biography only because the author promised to keep it secret that he is gay. The author kept her word, but big mouths at the publishing house can't keep from flapping." So here's how it worked: The same corporation that published the rumor is actually the source of the rumor. It also profited from the alleged blackmail and employed the victim.

Their book. Their tabloid. Their team. Their scandal. It is a spectacular example of synergy, working at its most efficient (when all moral, ethical and professional standards have been eliminated from the process and thus cannot gum up the works).

Finally, though, on Friday, after the news of Koufax's principled resignation made national headlines, the News Corp. apologized -- sort of. Here's the press release.

The following will run on Page Six in tomorrow's New York Post:

A two-sentence blind item we ran here on Dec. 19 about a "Hall of Fame baseball hero" has sparked a series of unfortunate consequences for which we are very sorry. The item said the sports hero "cooperated with a best-selling biography only because the author promised to keep secret that he is gay." Two weeks later, the Daily News' Michael Gross, after finding "Sandy Koufax: A Lefty's Legacy" by Jane Leavy on the bestseller list, named Koufax as the player and ran a photo of him. Koufax himself, an intensely private man, was deeply offended by our item. The author has denied making any deal with Koufax and called our item "erroneous." We apologize to both Koufax and Leavy for getting it wrong.

Note that even the supposed "apology" tries to blame the scandal on a competitor at the Daily News. That's typical. I worked for News Corp. -- for its Fox network and one of its cable sewers, Fox Sports Net, for three years. They were swine. Many companies are swine. But the Koufax episode is something extraordinary. This is the triangulation of swine -- three bullies beating up one kid called decency.

Early in 2001, as a show of good faith with the company, I signed a contract with the News Corp.'s publishers, HarperCollins, to write a sports book. Its production was tabled after the terrorist attacks. Now I will not write the book. I'm sending the money back. My reasons are ethical and practical.

Though the advance was only five figures, I think the News Corp. can use the dough. It might let Rupert Murdoch and his employees buy their souls back.