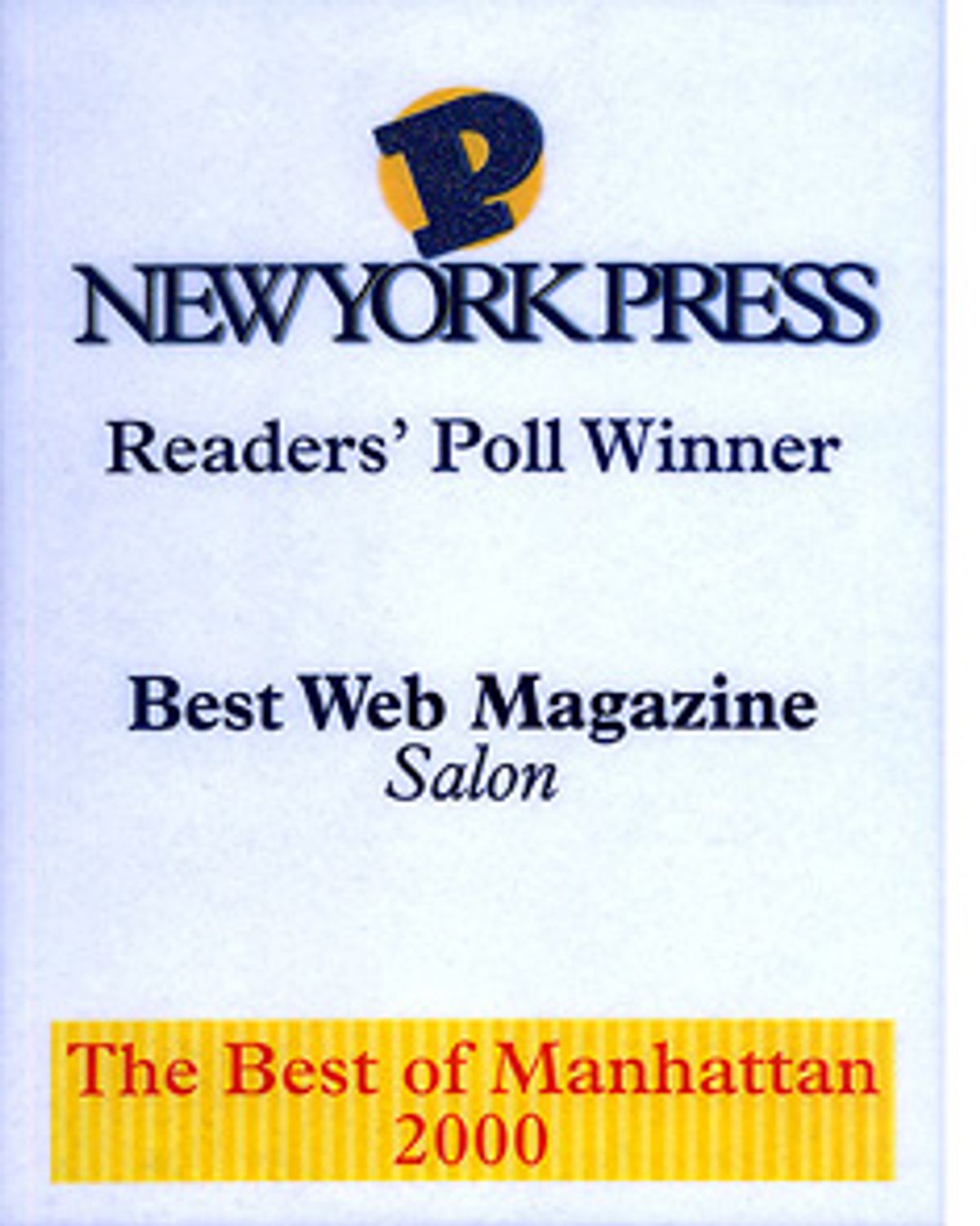 Did you ever get the feeling that some people want you dead? Last week's flurry of news stories about Salon's imminent demise produced another wave of hate mail from those eager to dance on our grave. (The fact that Salon never seems to actually die -- despite the tone of absolute certainty in these perennial press obits that this time, yes, it MUST be going under! -- never diminishes these letter writers' bloodlust.)

Here's a sampling from this week's e-mail bag: A gentleman named David Owens jauntily greets us with, "Hey d---ks----rs! I just read you can't pay your rent. Where are all your liberal buddies now? Oh well." A Hugh Curd rejoices that "thank mohammad, your truly worthless rag is going to fail ... maybe you can get some fresh capital from your bug-chasing friends in san francisco or your terrorist buddies in north africa. you failed! move to france and smoke cowardly dong." Stan Willock offers these words of consolation to Salon readers: "[They] will still have PBS, where hundreds are misinformed and entertained at taxpayer expense, as well as CNN, ABC, CBS and NBC. All are losing viewers to the fair and balanced Fox News Channel and to conservative talk radio. Best of luck looking for a new job. Hopefully you qualify as a member of a preferred group (person of color, female, gay, lesbian, etc)." And these are the more genial letters! I'll spare you the ones spelling out the lurid physical punishments their writers would like to inflict on me personally, which would make even Saddam blush.

But the most sustained piece of anti-Salon vitriol came from our old friends at the Wall Street Journal's editorial pages, those forward-looking men and women who yearn for the glory days of McKinley, Coolidge and Hoover and who have -- praise mammon -- finally found it in the current administration. In the Friday edition of the Journal, New York Press founder Russ Smith, who ran the money-losing conservative weekly until finally throwing in the towel last year and conceding victory to the liberal Village Voice, gleefully predicts "financial ruin ... for Mr. Talbot and his backers." Yes, he must admit, Salon "has inexplicably survived the dot-com collapse" so far. But this time, Smith is certain, it's curtains for those "beautiful losers"! And like the grave-dancers in our e-mail bag, he's not going to miss us, either: "Personally, I find Salon one of the more offensive publications on the Web. It's not just the strident Bush-is-an-illegitimate-president philosophy ... It's Mr. Talbot himself who rubs me the wrong way."

While the failed newspaper publisher clearly has no affection for Salon -- or me -- we can take consolation from the fact that his New York Press readers did. In 2000, while Smith was still running the show there, New York Press readers named Salon "Best Web Magazine" in the paper's annual poll -- and Smith was kind enough to send us a handsome, glossy plaque to commemorate this expression of the popular will, which we still proudly display in our office lobby. (I don't want to jump to conclusions, but perhaps the reason Smith is out of the publishing business these days is that he was out of touch with his own readers.)

Salon -- and I -- take all these attacks in stride. As Ishmael Reed observed, "writin' is fightin'." When you publish a rambunctiously independent daily in a time marked by conservative backlash and martial fever, you're bound to make some enemies. And we're proud of those we've made over the years, from Ken Starr to John Ashcroft and, of course, the right-wing guidance counselors at the Wall Street Journal's editorial pages.

What gives us the courage to keep fighting is you, our readers. Your letters of support over the past week have far outnumbered the hate mail. Worried about the reports of Salon's financial difficulties, Jeffrey C. Grossman and Katherine Moschandreas wrote, "We are very concerned and want to know what we can do to help. We are Salon Premium members and rely on Salon to give us the straight story on politics, art and international relations. No other publication gives the kind of intellectual and critical analysis of so many important pieces of news, ideas and culture. Sometime we feel that you are the only source that we can turn to, and we recommend Salon to just about everyone we know. Please let us know what we can do to keep Salon going; we love Salon and want it to stay around."

Chris Broderick wrote, "As a subscriber, I don't really know what I can do, but damn, there's got to be a way. With the way things are now in the world, I really rely on you people to give the news that I perceive to be the truth. I am so goddam frustrated with the mainstream media and their neglect of truthful reporting. It's going to be like a death in the family if you guys go down."

Mark E. Michael e-mailed: "I stumbled on you a few years back and then told my wife and her sister about this great e-zine (as it was once called). You have given us some wonderful memories, but we don't want them to end. And we cannot let right-wing voices be the only ones heard. There are elements in the government that wish to silence dissent and do it permanently. There will be no marketplace of ideas, only the authorized, approved one ... How can Salon be saved?"

Here's what you can do:

1. If you're not already one of our 73,000 current subscribers you can subscribe now through this page.

2. If you're already a subscriber you can give a discounted gift subscription to a friend or loved one (as a subscriber, you save 33 percent -- just be sure you're logged in). Click here.

4. Upgrade your current subscription to include a year's membership in Salon's acclaimed discussion forums at The WELL and Table Talk. Click here.

5. If you would like to make a donation to Salon in any amount, you can do so here.

If every one of our 73,000 subscribers brings in just ONE additional subscription, Salon will finally break even this year. In the current economic climate, advertising cannot be counted on to secure Salon's future. But YOU can help do that by buying at least one gift subscription.

The enemies of a free and critical press -- like the ministers of information at the Wall Street Journal -- want to write off Salon as dead. With our voice silent, there will be one less bullhorn to question the wisdom of our country's current direction. The world is becoming increasingly dangerous. As reader Mark E. Michael warned, don't let the "authorized" version become the only one you read. Help us fight the good fight. Thank you.