"Matisse Picasso," the blockbuster show of the decade, shows us how two modern-art titans saw each other across 50 years of dazzling creative competition. 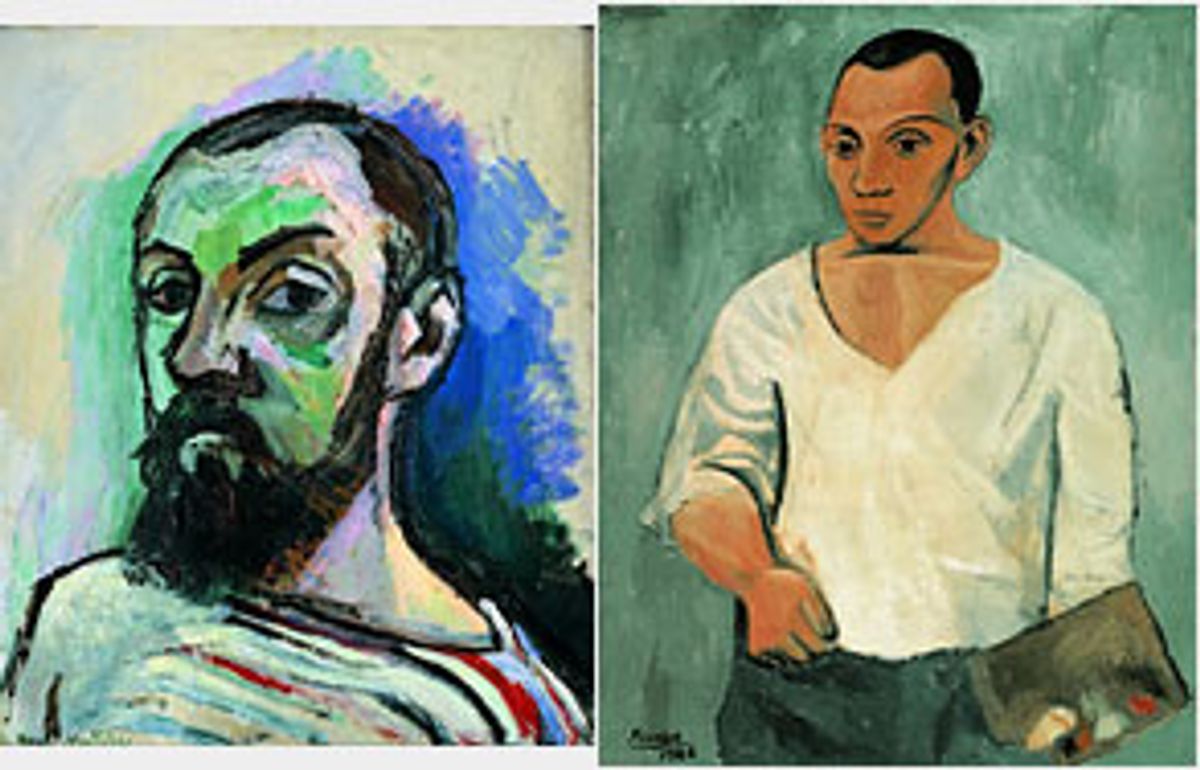 "Jann Wenner: What do you think Paul will think of your album?

Rivalry, at its best, is a kind of conversation, one that takes shape the way a call-and-response volley between two musicians (or field hands) becomes a whole that can't be subdivided into its varied parts -- a whole with such a distinctive flavor and shape that no one can remember who played the first phrase. Without even trying -- which is perhaps the only way to do it -- Henri Matisse and Pablo Picasso, together the subject of a blockbuster show that recently opened at the Museum of Modern Art in its temporary home in Queens, N.Y. (after stops at Tate Modern, in London, and Paris' Galeries nationales du Grand Palais), perfected the art of rivalry.

The two artists were well aware of each other's work before they were finally introduced, in 1906, by Gertrude Stein and her brother, Leo. And through the rest of their respective careers, each kept a wary but not unfriendly eye on the other, forging a relationship that became its own subtle, peculiar and highly attuned call-and-response. "No one has ever looked at Matisse's painting more carefully than I," Picasso said, "and no one has looked at mine more carefully than he."

You couldn't gather some of the most arresting works by two of the 20th century's most significant artists and not have it be somewhat dazzling. But what's astonishing about "Matisse Picasso" is how organic and unforced it feels. This isn't a greatest-hits show, although it certainly includes its share of hits. I was struck by how many of these paintings I've never seen, even in books. A joint effort by MoMA, Tate Modern, the Réunion des musées nationaux/Musée Picasso and Musée national d'art moderne/Centre Georges Pompidou, this is a blockbuster art show that feels designed not just to pack 'em in, but to jab a much-needed spur into the way we all think about art.

Most of the paintings (with a few drawings, sculptures and collages tucked in) are hung in groupings of two, or maybe four. Those juxtapositions are very rarely obvious (and they're still thought-provoking even when they are obvious); more often, they clue you in to subtle similarities between the work of the two artists. The show is less about the obvious earmarks of artistic rivalry than the nuances of it. Picasso and Matisse admired each other's work, and each seemed to keep note, consciously or otherwise, of how much attention the other was getting at any given time. But you can tell just from looking at the paintings that their motivation was rarely, if ever, to try to trump one another outright, but more a case of one seeing something the other had done and having some part of himself jostled or stirred, as if something previously fixed had been shaken free. That happened over and over again, over a span of some 50 years.

You can see it easily in Picasso's "Card Player" (1913-14) and Matisse's "Portrait of Greta Prozor" (1916). "Card Player" is a Cubist collage-painting, the sharpness of its angles and edges, as well as its meticulous jumble of stippled, striped and sandpaper textures, suggesting the softness of real-life movement. Matisse's "Portrait of Greta Prozor" is a wholly different kind of painting. It's a more conventional portrait, for one thing: Its subject was a part-Lithuanian, part-Swedish actress who traveled in arty circles during the teens, and Matisse presents her in somber color blocks of soldiery blues, sitting in a golden-yellow straight-backed chair.

But the composition and even the color sense of the two paintings echo each other wonderfully: In both paintings, the arc of movement swoops from the top-center of the canvas, curving gently -- even in the midst of all those straight lines -- down to the left and then over diagonally to the lower right corner. These two very different paintings lead the eye to travel the exact same path, suggesting not that one artist was copying or even necessarily influenced by the other, but that somehow the two of them had taken similar routes to reach different and distinctive ends.

In other groupings, the parallels are much more direct: Picasso's famous 1905-06 portrait of Gertrude Stein is paired with Matisse's 1917 portrait of ornery-looking margarine magnate Auguste Pellerin. Stein has a soft, rounded body -- that welcoming bosom of plushy, velvety browns ought to belong to a woman who's really good at, say, making soup -- but her gaze is piercing and judgmental: Sure, we all know that Stein had a major coconut on her shoulders, but Picasso put it right there for us on the canvas -- she looks like the kind of person who would judge you to be irredeemably stupid before you've even opened your mouth. (Picasso spent months on the portrait, through a supposed 90 sittings, only to end up suddenly painting out Stein's face; he returned to the picture months later and painted the face from memory. He said at the time, "Everybody thinks she is not at all like her portrait but never mind, in the end she will manage to look just like it.")

Matisse's portrait of Pellerin is rendered in similarly somber colors, although Pellerin is a much sterner figure physically, all up-and-down lines and assertive angles. But in the Matisse painting, as in Picasso's, the face is a mask -- a taut, airtight covering that gives few clues to the person inside except to suggest that both are intensely mistrustful of anyone on the outside, either intellectually or emotionally or possibly both. They're parallel -- not matching -- feats of portraiture that suggest similar ways of looking, if not of painting.

Wandering through "Matisse Picasso" is something of an adventure. You may have seen Picasso's astronomically famous 1907 "Les Demoiselles d'Avignon" before, particularly if you live in New York, where it makes its home. (The painting is part of the MoMA permanent collection, and the museum declined to lend it out for the "Matisse Picasso" exhibits in London and France, which apparently annoyed European museumgoers.) It's no less wondrous in the context of Matisse's 1908 "Bathers With a Turtle," with which it's paired. The softer, rounder images of "Bathers" look nothing like the demoiselles, but they're both fascinating examples of the way modernism often masquerades as primitivism (or is it the other way around?), particularly when an artist turns his gaze to the most elemental of all subjects, the female nude.

How do you make a painting as famous as "Les Demoiselles" look "different" or new, as it does in this show? Context is everything, and "Matisse Picasso" is all about carefully thought out context that's devoid of preciousness. That brings some freshness even to very famous works like Picasso's 1932 "The Dream" (a painting that's sensuous less for its sense of color or composition than for the blissful expression on its subject's face) and Matisse's 1946 "Asia" (which, with its hot salmony fleshtones and vivid brick orange background, is much more charged in terms of color, its sensuality more implied than spelled out).

The juxtaposition of these two paintings, like almost every other pairing in the show, hardly suggests that Picasso and Matisse grabbed all their cues from each other. The works here draw very obviously from countless other sources, among them Cézanne, Juan Gris and Ingres. But it does show them as two behemoth forces who spent a great deal of time first looking outside to the world and then onto their own canvases; now and then, they would circle back to check up on each other, and each learned from what he saw.

"Matisse Picasso" may be one of this young decade's most important shows not simply because of the fame and significance of its subjects but because it was clearly put together with so much thought, care and originality. The blockbuster show has changed the way we view art, in all parts of the world but particularly in America. How can we possibly stay away from these dazzling retrospectives? (Matisse and Picasso are always big draws anyway: MoMA's 1993 Matisse retrospective drew 940,000 viewers, while its 1980 Picasso show attracted nearly 977,000.) Retrospectives, whether they deal with a specific artist, era or style, are valuable for any number of reasons, not least because they present groupings of works that we might not normally get a chance to see.

But we're never supposed to challenge the mere idea of having a gaggle of Jackson Pollocks or Cubist masterpieces or what-have-you gathered together in one place for a gluttonous hour or two of public viewing. And sometimes there's no way around it: As wonderful as it is to have so much at one's fingertips (for the price of that special-admission ticket, that is, as well as any travel costs incurred), on some level it just isn't right.

One Pollock, hung in a gallery with a handful of paintings by assorted artists, can be a revelation. A room full of them is certainly valuable in terms of scholarship, and as a way of getting a sense of an artist's development over time. But it isn't always the best way to feel the deepest joys and pleasures that great art can give us. By the time you hit the last gallery of even the most well thought out retrospective, you're likely to feel both sapped and virtuous, as opposed to exhilarated, and more than ready to hit the cafe or gift shop.

That's not necessarily a criticism of either museumgoers or the museums that sponsor these huge shows. Everyone who cares about art shells out for these tickets at one time or another, because, let's face it, if you have a chance to see even just one important painting (let alone three or 12 or 20), you grab it. One of the benefits of our smaller, densely connected world is that opportunities that used to be open only to the very rich are sometimes dropped practically on our doorstep.

But if I were to judge "Matisse Picasso" solely by the way I felt at the end of it -- exhilarated instead of exhausted -- I would call it a natural hit. By the time I rounded the corner to see the last two paintings, Matisse's 1918 "Violinist at the Window" and Picasso's 1953 "The Shadow" (both self-portraits of sorts, and both inexpressibly touching as ways of showing an artist's separateness, but not detachment, from the rest of the world), I felt sorry to leave -- something I haven't felt at a show since the Tate's 1999 Pierre Bonnard retrospective. "Matisse Picasso" has been put together to coax from each of us an intense personal connection with these paintings. These two almost untouchable figureheads spoke to each other, sometimes directly but perhaps more often through painting. It was one way in which they shared themselves with each other as well as with the rest of the world.

"Matisse Picasso" takes us out of our own shoes and puts us briefly in theirs; we see them less as we're used to seeing them and more as they saw each other. When these paintings return to their usual homes and their usual contexts, they won't be any less great. But for now, they're secret windows as well as paintings -- a thrilling affirmation that there will always be new ways of seeing old stuff.