Midseason political drama "Mister Sterling" places second in Friday night ratings. Is that enough to get a good show reelected this fall? 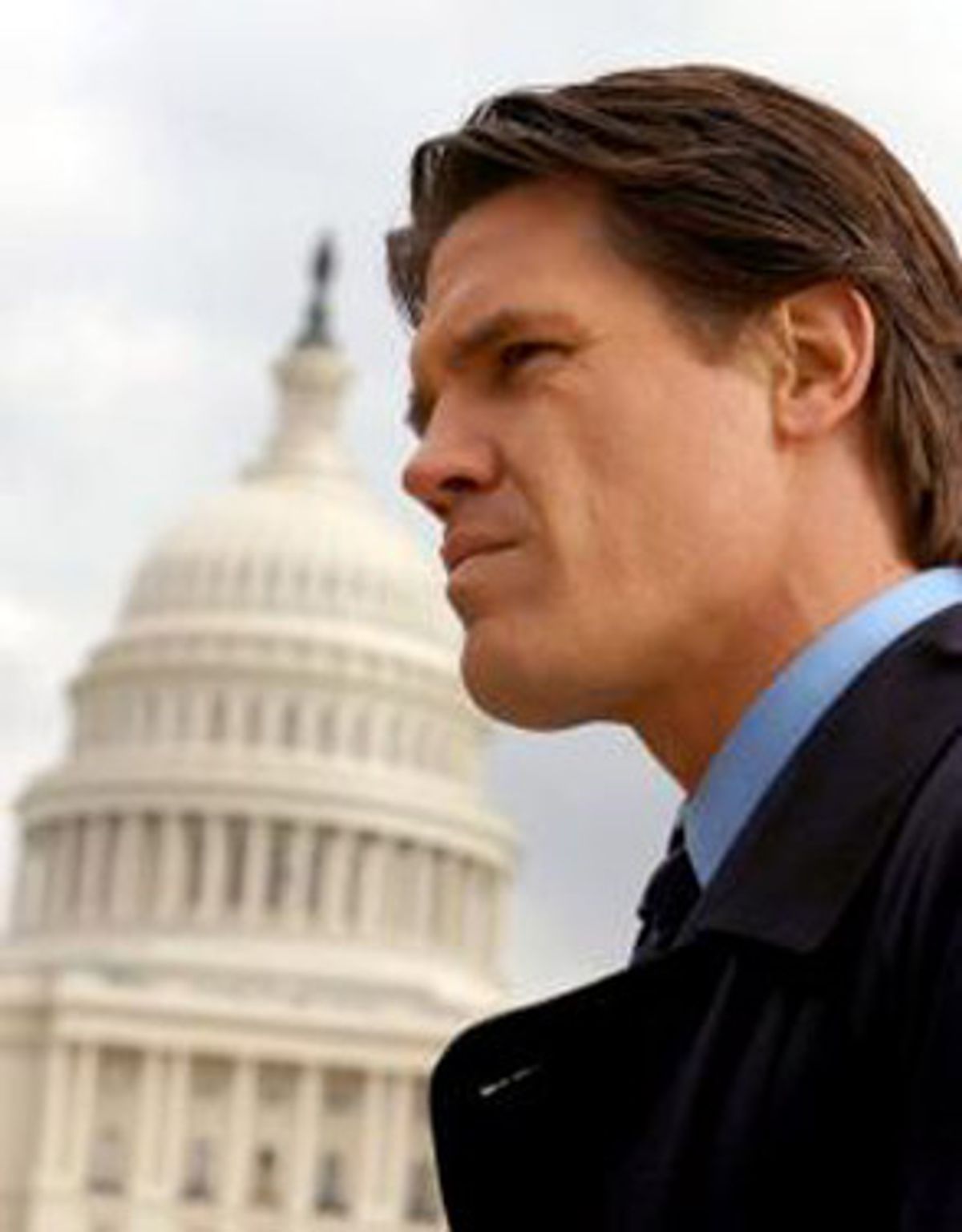 "Do you know what you're doing here? Do you? Or is this just some crazy roller-coaster ride to nowhere that's gonna make us all look like idiots?"

Actress Audra McDonald is either describing the perils of working for a freshman senator or the risk of debuting a midseason pilot, but either way it's tough not to share her fears. "Mister Sterling's" "outsider on Capitol Hill" formula has felt as old as the hills since Mr. Smith went to Washington, and that 8 p.m. Friday slot is often the roller-coaster ride to nowhere of the prime-time schedule. Still, the show is winning respectable ratings (11.1 million viewers) after its fifth episode on the air, and has demonstrated the necessary combination of compelling plots and dramatic weight to make it a potential hit. But who knows if NBC will give this outsider the time to rally enough support for another term?

Given the continued popularity of "The West Wing" -- not as successful as it once was, but still averaging 20th overall in the ratings -- it was only a matter of time before another political drama budged into prime time. And "Mister Sterling's" main strength may be a reflection of "The West Wing's" Achilles heel: Many viewers can't quite follow what the hell Martin Sheen and company are blathering on about. Despite the fact that creator and executive producer Lawrence O'Donnell has worked on the Hill and written for "The West Wing," he seems willing to sacrifice dogma for drama: "Whatever happens politically, whatever the issues turn out to be, is simply a matter of making the most interesting dramatic choice in that situation, not trying to sell an idea."

In keeping with this approach, a slightly unbelievable scenario launches William Sterling, a prison schoolteacher, straight to the Capitol and into a seat on the Senate's Finance and Appropriations Committees (when his chief of staff refers to them as "the best committees" she sounds just like a young hopeful at sorority rush). Still, there are interesting dramatic choices aplenty: Sterling (Josh Brolin) is sworn in while his proud father (James Whitmore), a wildly popular former governor, watches on TV. Sterling fires his sleazy chief of staff (Stanley Kamel) and promotes his press secretary (McDonald), a sharp, idealistic young black woman, to replace him. Sterling infuriates the Senate majority leader, refuses favors from slippery lobbyists and stops to chat with a lovely young journalist who looks more like a "90210" extra fresh from Pilates class than someone who crouches over a keyboard, chain-smoking and reading the wires most of the day.

Despite his generic square-jawed swagger, Brolin plays the unfrozen caveman in Washington surprisingly well, hitting all the appropriate marks from earnest enthusiasm to moral outrage. Naturally, his Mister Sterling has all the traits of a likable hero: He's idealistic but reasonable, he follows his instincts but he's still humble enough to take advice from his staff members, he doesn't hide his disdain for the slick manipulations and accepted posturing of politics but he's not entirely incapable of coloring within the lines. Plus, he's polite and sensitive to secretaries and underlings and poky little puppies!

In other words, he's the American electorate's dream: principled but practical, confident but approachable, lovable but ethical. He didn't inhale, but it's none of your damn business! A few years ago, Sterling might have seemed like a clichéd rehash. But at a time when our leaders' inflammatory rhetoric inches us closer to war, watching a politician navigate unfamiliar waters with grace and diplomacy is downright irresistible.

Not surprisingly, "Mister Sterling's" plot structure resembles "The West Wing's," but it's a little less nuanced and more clumsily sensational than its predecessor. Here's the high-pressure press conference, buzzing when Sterling is asked about his drug history -- as opposed to, say, his stance on the ratification of a new nuclear test-ban treaty. Here's the manic walking-and-talking routine, taken at a lazier pace -- the banter is less clever, but it's also less chafingly obtuse.

And even as he's bolting to some meeting on the Hill, Sterling often stops, midstride, to remember a joke or to speak to a staff member or journalist. He's urged to hurry -- important old white men are waiting! -- but he just doesn't care. If Sterling were the president, of course, taking some time out for sincerity and understanding might seem downright irresponsible. But he's just a senator, so there's more room for compassion, or silliness -- and more room for O'Donnell to toy with the conventions of his alma mater, even as he borrows from them.

And that's when the roller-coaster ride starts to get fun, because, although "The West Wing's" sharp writing clearly sets the gold standard for political dramas, its shrill moral tone is beginning to wear thin. Watching the same wittily cool characters digest one complicated legislative initiative after another without stopping to gasp for air has drained the show of some of its emotional impact. Once you've been comfortably camped out on that moral high ground for a while, your self-righteous indignation has far less bite than it once did. We understand by now that "The West Wing's" C.J. and Josh and Toby and the rest are deeply ethical humans doing their very best in a crazy, mixed-up world. These characters have moral compasses that function flawlessly -- hell, they have moral navigational systems. So where's the fun when they get lost, or find themselves on unfamiliar terrain? No matter how high the stakes -- from educational reform to World War III -- there's no real suspense if we know our heroes are going to do the right thing, time and time again, heedless of campaign dollars or votes.

If the characters in "The West Wing" are too self-righteous for their shirts, and the seething, conniving White House insiders on "24" share a Darth Vader-like evil, "Mister Sterling's" cast also seems destined to fall predictably into Good or Evil categories, with each character's moral stamp clear within seconds of his or her first appearance on-screen.

At least the holier-than-thou soldiers of "The West Wing" occasionally sweat or snap or lash out under pressure, however superficial their moments of doubt might be. Brolin plays his role with such relaxed, good-natured aplomb that he seems to blithely move from one challenge to the next like he's shopping for socks at the Gap. Sure, he has issues with Daddy, but other than that, he's as calm as cucumber hand lotion.

In fact, on the whole, "Mister Sterling's" cast feels a little too one-note and made-for-TV -- McDonald looks puzzled most of the time, and Noroña always has the same bright-eyed, earnest demeanor. Compare that with the rich, mercurial cast of "The West Wing," who are capable of capturing our interest even when they're racing through those carpeted hallways. The exception on "Mister Sterling" is James Whitmore, who plays the role of a proud father faced with his own irrelevance brilliantly, a stunning mix of emotions washing across his face every few seconds. It's no wonder the camera zooms in so close every time he's in a scene. But the rest of the show's characters need to gain more depth and complexity, both on the page and in their performances. Otherwise, this devil-may-care outsider and his sidekicks will be as hard to take seriously as some of the show's dramatic but highly fantastical scenarios.

In other words, out of the unbelievable frying pan, into the unbelievable fire. Of course, O'Donnell has hinted that his show is less about realism than entertainment. "I really have no idea what the country is thinking politically. I'm just trying to write the best dramatic show we can do, the most entertaining show."

If "Mister Sterling" hopes to be an easier, cheesier "West Wing" -- which is at least a practical goal, considering "CSI," an easier, cheesier "NYPD Blue," currently has the best ratings on television -- it's got to take that unbelievable path, otherwise known as the low road. And, for all of "Mister Sterling's" overly obvious dialogue and goofy paint-by-numbers situations, its story lines have the dramatic punch that "The West Wing" has lately begun to lack -- proving once again that the high road might be more scenic, but the low road is sometimes a little bit more exciting.