The case of the frozen penis

Most young feminists just talk about deconstructing the phallus. But when two undergrads saw a white willy rising above Harvard Yard, they reached for their shovels. 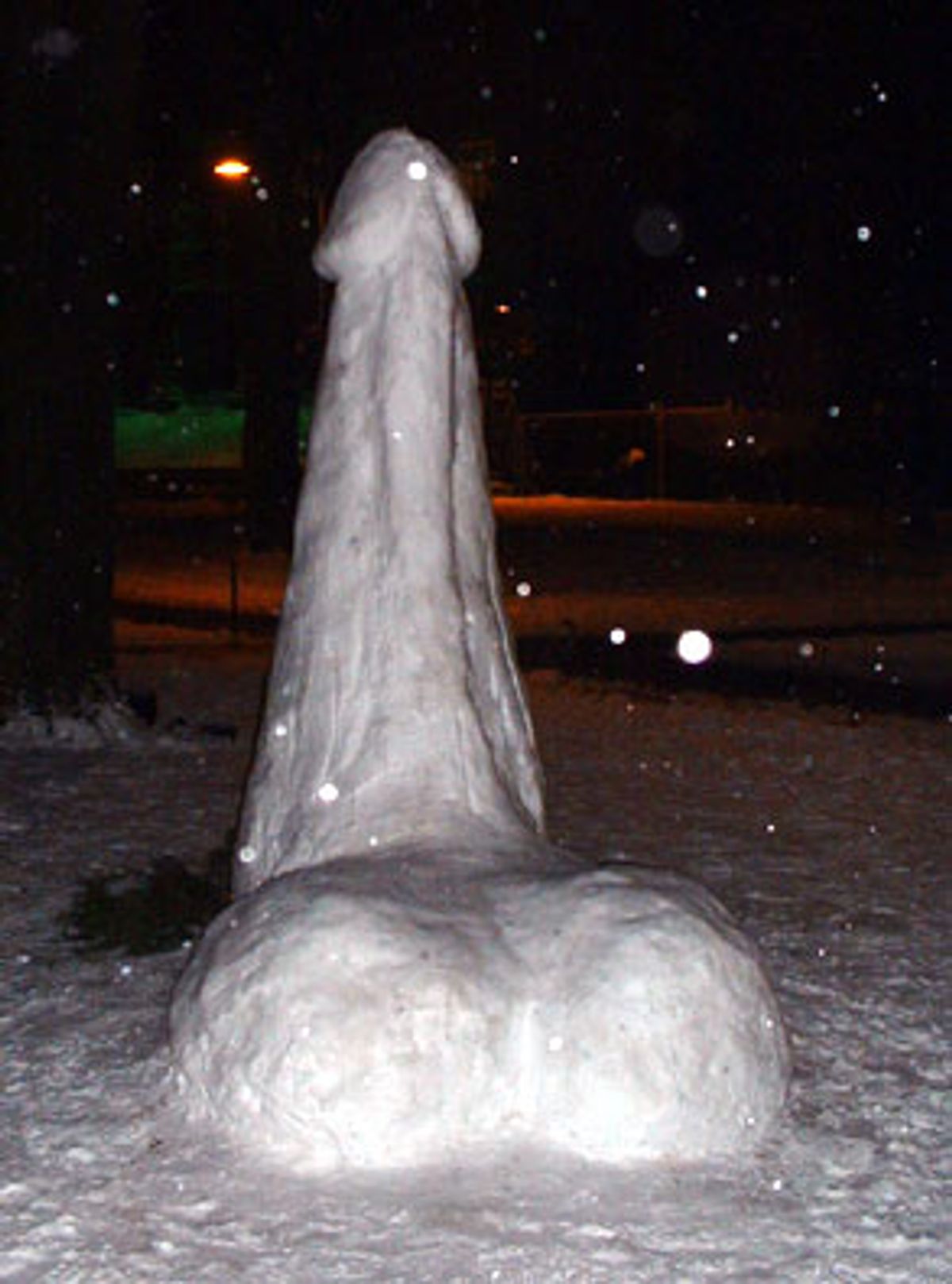 For a few hours at Harvard this month, the dominance of the white male phallus was not just a concept. At around 10 p.m. on Feb. 11, a dozen rowers on the university crew team completed work on a 9-foot-6-inch tall penis made of snow, complete with according to a Feb. 19 article in the Crimson -- "life-like veins, a urethral bulge, and a sizeable scrotum." Rising into the hallowed air of Harvard Yard, the Snow Manhood attracted scores of supportive onlookers and, you might say, onlickers -- not to mention inquiries about the identity of the sculpture's model.

But it turns out they had trouble keeping it up. Later that night, offended undergrad roommates Amy Keel, 20, and Mary Clare Cardinale, 22, used cardboard tubes and shovels to knock the makeshift monument down.

Vandalism! Puritanism! Misogyny! Too much free time! Raging in dining halls, women's groups, and in the pages of the Crimson, the ensuing -- and ongoing -- debate over the limits of 1) free expression and 2) feminists' sense of humor has been a veritable winter carnival of overthinking and overreacting. Harvard men will be boys; Harvard women will learn, sooner or later, which battles to bother with.

That said, you don't need a Harvard degree to understand why some folks there might have been put off by the single-entendre sculpture. Harvard has notoriously few tenured female faculty; its new sexual assault grievance procedure is under investigation by the U.S. Department of Education's Office of Civil Rights for being in possible violation of Title IX. Also, it was a giant white penis.

"I realize [the sculpture] was just a joke and that there was no malicious intent, but it propagated the notion that women don't really belong here. It felt like it kind of put us in our place," says Keel, who has received a blizzard of hate e-mail since the incident.

That snowy night, the crew team was actually trying to do something wholesome. "We don't want to get into trouble for drinking, so we have to try to find other activities to bring freshmen into the team," says captain Mike Skey, 23, a senior economics major from New Jersey. "So we thought, Let's make a snow sculpture! Good clean fun! We can't get into trouble for that!"

When Mary Clare Cardinale happened by the construction project, she giggled at first, then started to wonder: "The whole community goes through here, tourists and old folks -- what would they think? It wasn't so much the feminist thing for me. [The sculpture] was not appropriate for where it was," says the senior government major from Queens, N.Y.

"She came home and told me about it, and I was like, 'Let's take it down!'" says Keel, who claims that the two were threatened and shoved by male students during the process of deconstructing the phallus.

Keel defiantly took responsibility for the act in a Feb. 21 letter to the Crimson. "I, Amy Elise Keel, proudly own up to the fact that it was indeed me -- with my roommate -- who dismantled the obscene snow penis 'sculpture,'" she wrote. "The unwanted image of an erect penis is an implied threat; it means that we, as women, must be subject to erect penises whether we like it or not." The paper went on to have a field day with headlines such as "Ruined Snow Penis Stimulates Debate" (Feb. 24).

Women's studies lecturer Diane L. Rosenfeld was "not anxious to comment further" on the issue, saying that the paper's oversimplification of her comments had already gotten her enough hate mail. Can't blame her: The Crimson makes her sound like a Lampoon parody of a feminist scholar. (Wrote reporter Hana Alberts: "[Professor Rosenfeld] said the snow penis follows a long line of public phallic symbols, including the Washington Monument and missiles." Oh dear.)

But just a few days earlier, the Crimson ran an editorial that read like a Lampoon parody of a pretentious Harvard pseudo-scholar. Calling the snow schlong a work of "challenging art," executive editor Jonathan H. Esensten asked: "Why did the enormous phallus elicit such iconoclastic fanaticism?" He then performed an irony-free analysis of the "long, and distinguished history of phallic imagery in art." Example: Since the soldiers in Aristophanes' "Lysistrata" "can no longer fight because of their chronically-swollen members," he explained, "the phallus is a symbol of peace." Citing examples of phallic imagery in ancient Hindu and Egyptian culture, Esensten concluded that "the Greeks were not alone in their positive association with the tumescent male appendage."

I guess the Harvard women didn't take that class.