Digging their way out

Back from the dead, the characters on "Six Feet Under" are finally learning how to live, and the effect is more devastating than ever. 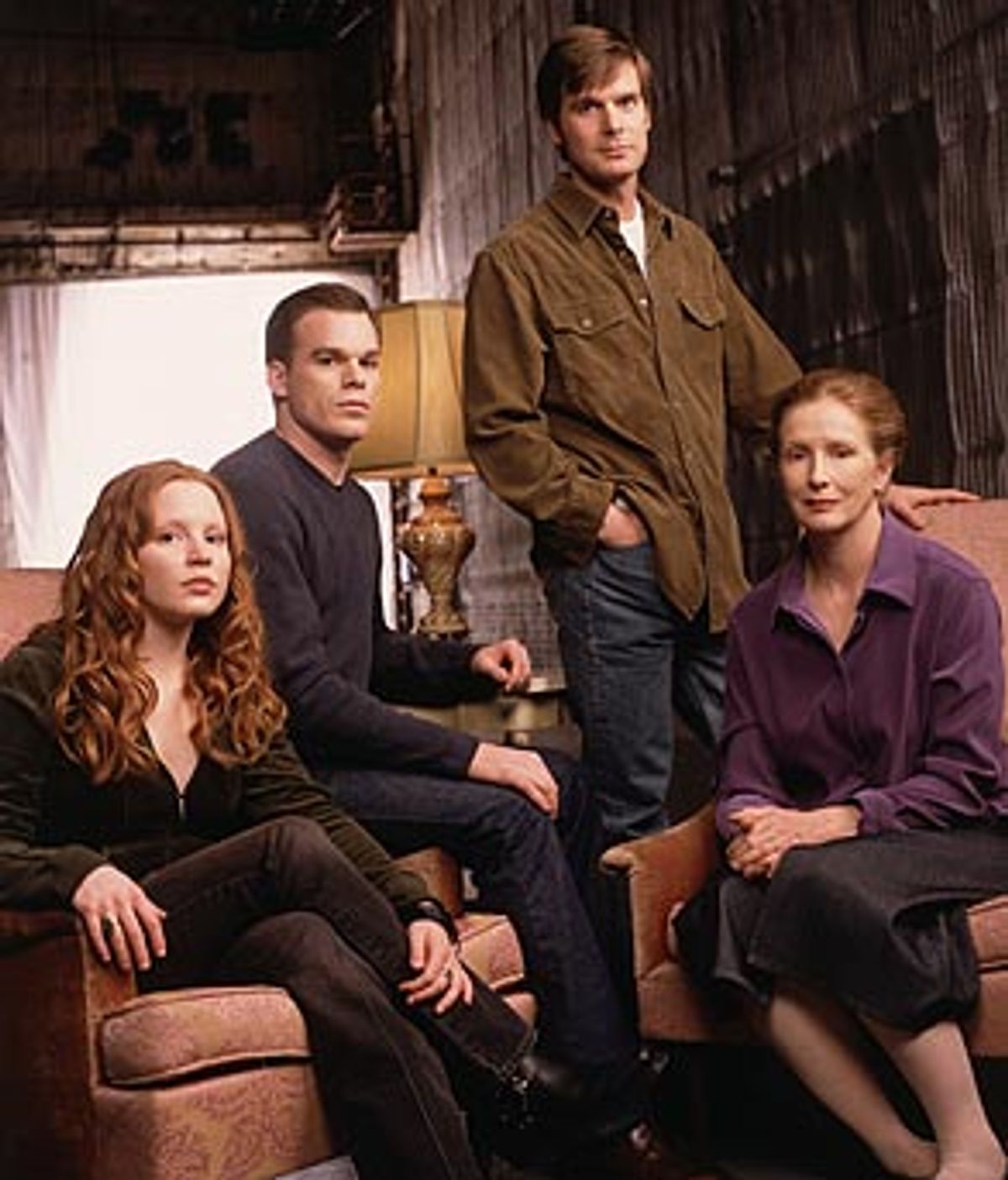 "I am lucky. So fucking lucky."

After two seasons of grappling with his own mortality, "Six Feet Under's" prodigal son Nate (Peter Krause) is declaring himself grateful to be alive. Still, we only half believe him. After all, on this show, not even miracles are immune from our ambivalence.

But then, we've just been on a head-spinning tour of alternate realities, ranging from Nate's death during brain surgery to his marriage to Brenda. Along the way, in an obvious nod to critics who have compared the show unfavorably to a soap opera, we find an overweight Nate, smoking and watching a crazy highbrow version of "General Hospital" where the actors spout unhinged lines like, "We always end up in a universe in which we exist!"

When we finally land at a backyard barbecue, where Nate has moved in with Lisa (Lili Taylor), the mother of his child, the stakes are higher than ever, but our feelings are mixed. Mixed feelings are the only natural response to such an absurd avalanche of possible outcomes -- which is, of course, the point. Once you've accepted the inevitability of your own death and the arbitrary nature of your choices, you still have to find a way to live.

This season, the characters of "Six Feet Under" find themselves tackling the everyday challenges of survival: Ruth (Frances Conroy) quits her job and struggles against her irrelevance as an aging mother, Claire (Lauren Ambrose) starts art school but fights the temptation to blow it off for a tattooed young rocker, and Rico (Freddy Rodriguez) asserts his will as a partner in the funeral home.

Meanwhile, Nate and Lisa play house with sweet conviction, but even their most blissful domestic scenes have a queasy, mind-over-matter edge to them. Their uneasy peace is underscored by the constant interruptions of Carol (Catherine O'Hara), Lisa's spoiled Hollywood producer boss, who demands her services as live-in chef around the clock. In contrast to the couple's quiet attempts to better themselves, Carol is an outrageous, dysfunctional black hole, capable of shifting from false cheer to passive-aggressive tyranny in seconds, to great comic effect. When Carol remarks, "You really amaze me, Lisa. Your energy, it's boundless!" she clearly means it as an insult.

In contrast to Nate and Lisa's squelching pact of politeness, David (Michael C. Hall) and Keith (Mathew St. Patrick) have started couples therapy, hoping to defuse their explosive relationship. Unlike those unbearably unrealistic therapy scenes from "The Sopranos," David and Keith's sessions are hilariously real. When David lets loose with a tirade ("I feel judged, I feel criticized, I feel like nothing I do is ever good enough, I feel ashamed of who I am, I feel like I'll never be the person you want me to be ...") Keith rolls his eyes and calls it "a lot of whining."

But the real fun begins when the two clumsily attempt to wield their new communication skills at home. In the midst of preparing dinner, David takes a deep breath and announces, "OK, I feel shamed. When you said 'I already added pepper,' my perception was that you were irritated with me for not knowing that already, and that you were also angry with me, that I shouldn't have done it ..." The absurdity of unearthing every fleeting emotion is demonstrated so exquisitely that Lisa and Nate's path of denial suddenly seems attractive.

But as "Six Feet Under" beautifully demonstrates, making good choices is no small matter when life isn't reduced into easy categories of right and wrong. In one such dilemma, Ruth reluctantly fills a Vicodin prescription for sister Sarah (Patricia Clarkson), only to find her in withdrawal, sweating and outraged, being policed by her friend Bettina (Kathy Bates), who's harried from days of cleaning up vomit and uprooting hidden stashes of prescription drugs.

Ruth is her usual sanctimonious, rigid self, until she and Bettina, tiring of Sarah's abuse, tie her to the bed and go outside for some fresh air. Ruth says to Bettina, "I don't know how you remain so calm." Bettina's response? "I took a Vicodin! I figured if there was ever a time ... You want one?" Just when we think we know the moral to the story, the floor drops out, and we're left to reach our own conclusions.

But then, creator Alan Ball and his "Six Feet Under" collaborators consistently resist the temptation to take the nearest moral exit. The show's characters relentlessly face difficult decisions, and the suspense comes from not knowing what they'll do next -- or even what we might do in the same circumstances. Each character is simultaneously rigid and spontaneous, likable and unsympathetic, reserved and out of control, compulsive and controlling. Like real people, they're flawed in small, familiar ways. But the show reminds us that there's a continuum between small mistakes and huge moral lapses, and that circumstances can slide us closer to decay and destruction than we'd like to believe. Thus, even in the smallest choice -- Should Claire blow off art class? Should Keith quit his crappy job as a security guard? -- the stakes can seem unbearably high.

But "Six Feet Under's" high stakes don't make it a soap opera. Critics stigmatize the show for its cliffhangers and extreme plot twists: Nate has brain cancer! His girlfriend is sleeping around! His ex-girlfriend is pregnant! But just throw in a gaggle of cops, doctors, lawyers or politicians, with all their predictable blathering about policies and strategy, and you're watching any other drama on TV. On "Six Feet Under" the characters sidestep all that formulaic hash, leaving them more time to focus on the weighty decisions and events in their lives.

If anything, the show captures the mundane catastrophes of day-to-day life so vividly and cinematically that melodrama becomes unnecessary. These characters aren't making empty trouble for each other or stumbling through some arbitrary obstacle course invented by a lazy storyteller. Everything they do is familiar, organic and real. Every move they make, every remark that spills out of their mouths, stems from complex motivations. From the way David flosses his teeth to the way Lisa sniffs her baby's laundry, shades of rich, true characters, replete with quirks and weaknesses and defense mechanisms, shine through.

And even when you cast aside the beautiful lighting and the clean simplicity of each frame, there's so much intelligent, nuanced material to experience here: Keith and David arguing over who their couple's therapist likes best, then flinching as they hear Lisa and Nate's creepy rendition of "Michael, Row Your Boat Ashore" over the baby intercom; Carol demanding cinnamon toast in between screechy complaints about how much she hates Melissa Gilbert; Ruth and Bettina swinging in a hammock, remarking on how peaceful it is, while Sarah's screams ("I'm dyyying!") can be heard faintly in the background. These are characters who observe each other's faults in ways that reflect their own, who struggle to accept themselves and each other but still get drawn into each other's perspectives until they can't see straight, who wrestle endlessly with their emotions, searching for answers and finding only a tangled mass of possibilities.

"Six Feet Under" is a smart, thoroughly modern show, richly informed by psychology, philosophy and the irritating quirks of popular culture. But for all its highbrow aspirations, the show finds grace in the mundane, in small things and passing emotions, in hesitance and regret. Because, for all their overreaching, the characters of "Six Feet Under" are repeatedly forced to recognize that life choices can't simply be distilled from higher ideals. As Wallace Stegner wrote in "Angle of Repose," "Wisdom is knowing what you have to accept."