Watching faux-celebrities marinate in the Australian rain forest for 15 painful hours proves that even in the alternate universe of reality TV, less is more. 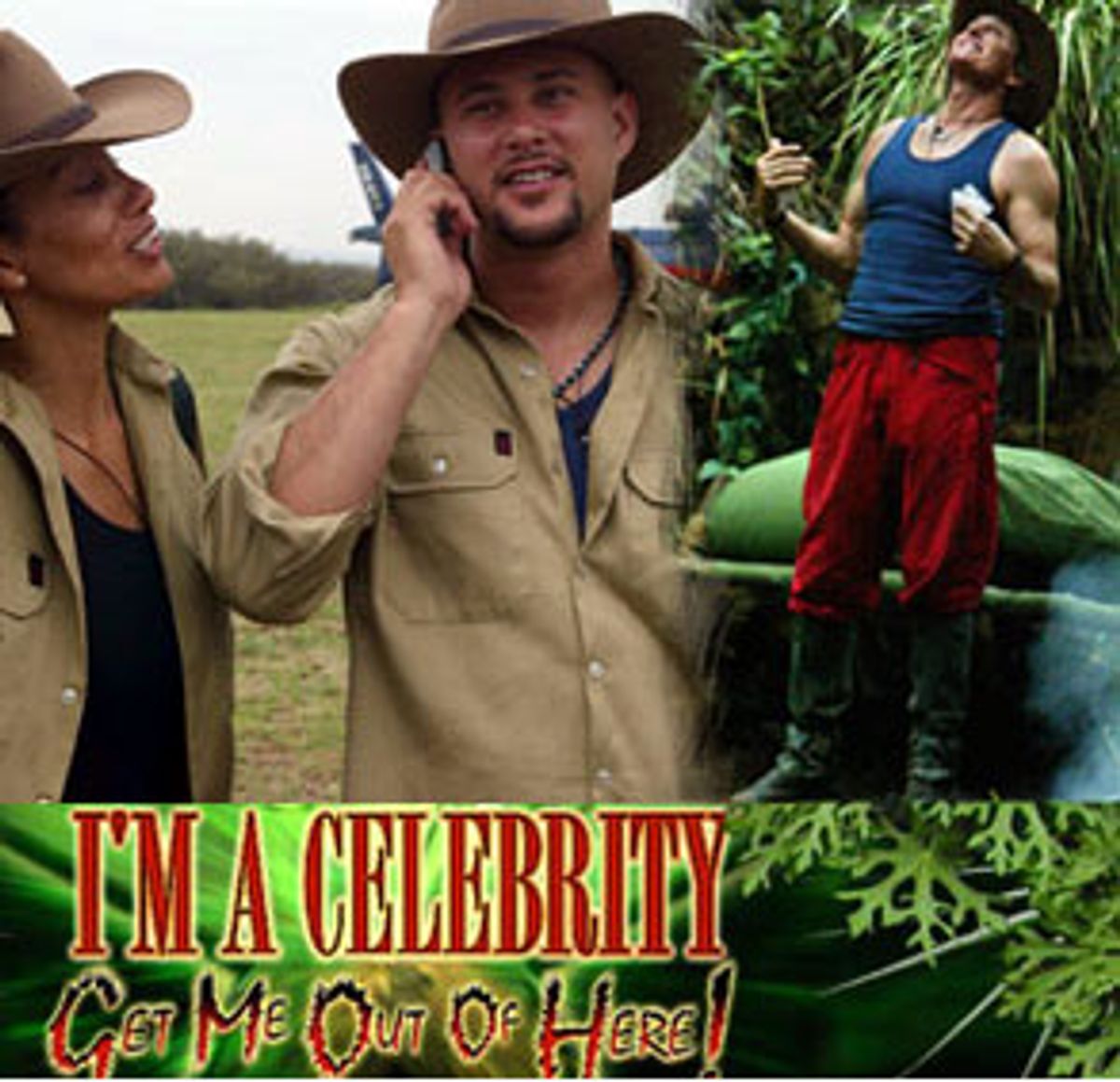 Wednesday night on the not-so-anxiously-awaited finale of "I'm a Celebrity, Get Me Out of Here!" on ABC, masochistic viewers tuned in for two grueling hours to watch Cris "I'm Not Remotely a Celebrity" Judd get crowned "King of the Jungle", presumably to avenge Jennifer Lopez for the crime of unprecedented overexposure, not to mention for cruelly unleashing "Jenny From the Block" on innocent teenagers everywhere. Judd won an undisclosed sum for his charity, the Make-a-Wish Foundation, but ABC was the big loser of the night, since its marathon programming gambit proved to be a major disappointment in the ratings.

The few viewers who tuned in to see "how 10 celebrities fare without their accustomed luxuries" must have also been disappointed. Instead of witnessing Melissa Rivers longing for her Kiehl's lip balm, or "Downtown" Julie Brown bemoaning life without her personal assistant, they got hours of pouting, tears and threats, erupting constantly on the show's claustrophobic rain-forest set. Apparently the luxury these celebrities missed the most was unconditional positive regard.

But does Alana Stewart, whose biggest claim to fame is that she was once married to Rod Stewart and George Hamilton, really have a right to whine? She told host John Lehr, "I don't fight with people, honestly." Yet, viewers watched her complain and clash with every one of her fellow campers for over a week. Within the first few days, "Downtown" Julie Brown whispered in her ear, "I'm gonna hurt you. That's all I have to say." Robin Leach remarked afterward, "It's safe to say that Alana is a living nightmare." So what kind of people does Stewart manage not to fight with? Distant relatives? Casual acquaintances? Paid employees?

And then there's model Tyson Beckford, who, in an attempt to explain his fellow campers' mixed reactions to him, said, "My presence is very intimidating, so therefore there might be a little animosity, might be a little jealousy toward me about it." Later, he explained the situation in more humble, less delusional terms: "I think they feel very threatened. It's like what they did to Caesar. You know, Caesar was stabbed by all his friends ..."

Bruce Jenner, an Olympic gold medalist whom you'd expect to at least vaguely resemble a human, but who looks like he just got back from a drastic visit with a plastic surgeon (he's not the only one), wants to make it crystal clear that he understands and can relate to the other humans around him. After "Stuttering John" Melendez does the viewers at home a favor and asks Jenner if he's wearing makeup, Jenner's reply is downright robotic. "You have your personality, it's kind of sarcastic ... and sarcasm is a form of ... humor, which I understand. That's not my sense of humor, and the way I work with people is obviously very different than the way you do."

How does Jenner work with people? Apparently with bossy instructions, false cheer and long, winding, self-involved stories. Melendez has begun to signal his impatience with Jenner's endless tales by using sarcasm (a form of humor) and, more specifically, by snoring loudly midstory.

Not surprisingly, the only celebrity who is loved by all (and who won it all), Cris Judd, isn't really a celebrity. He was briefly married to and then allegedly dumped by J. Lo, a tidbit that gets mentioned constantly by the show's host in an overeager effort to drum up controversy. Oh yeah, and then there's the little problem of Jenner, who obliviously keeps comparing his son's good looks to Ben Affleck's.

What's remarkable is not the physical pampering these celebrities are used to. After all, most of them have managed to sally forth against terrible weather, soggy rice and bean dinners, unsanitary conditions (the rain caused the Porta-Potty to spew waste all over the campsite), and those disgusting "Bush Tucker Trials," most of which involve getting covered in and/or bitten by leeches, cockroaches, spiders or mealworms. They've all proven themselves remarkably resilient in the face of such rough conditions, yet have remained startlingly inflexible in dealing with each other.

So what kind of emotional pampering are these celebrities accustomed to? Obviously, plenty of stars are human experiments gone bad, their development arrested at the moment they won the camera's interest. And it's at least somewhat entertaining to watch all that self-involvement and egocentrism clashing so openly.

But do you have to throw these precious little kittens into the Australian rain forest to make them mew piteously? "The Surreal Life" -- the WB's celebrity version of "The Real World" -- proves that the torrential rains are unnecessary, if not an outright guarantee of tedium. In fact, the creators of "The Surreal Life" have the celebrity reality show figured out: Just invite a gaggle of entertaining and slightly weird has-beens, like Jerri Manthey from "Survivor" II and Gabrielle Carteris, the geeky girl from "Beverly Hills 90210," to stay in a luxury mansion together, plan a bunch of goofy outings for the group, and then edit it down to a half-hour a week so only the most entertaining moments are included.

Of course, the quality of "The Surreal Life" comes from great casting as much as skilled editing. The celebrities on the show aren't just the exes of ex-stars, they're actual icons of '80s pop culture. Watching MC Hammer, Emmanuel Lewis and Vince Neil shop for toilet paper is, not surprisingly, a little bit more of a spectacle than seeing Bruce Jenner hang his tighty-whities out to dry. "The Surreal Life" stars are also far more likable and down-to-earth; from Hammer's interactions with strangers at the Fatburger to former Playmate Brande Roderick's honesty about her love life, it's clear this group has regular contact with ordinary people. Everyone in the group is fairly outspoken without stepping on each other's toes, and they all seem interested in having a good time.

But then there's Corey Feldman. To be fair, the show should really be called "Corey Feldman's Surreal Life," since the most memorable moments revolve around his apparent difficulty in making it through each day without having an emotional breakdown. Even though the others seem to try hard not to rip into Feldman, Carteris observes that "Corey lives in trauma, and that's where he probably is functioning most of the time." Hammer remarks, "There's always some type of drama or stress." Neil adds that Feldman "could find drama in what he was eating that day." And then Feldman chimes in with a melodramatic comment like, "Everything is just kind of coming at me from all sides, and I wish that I could have other people feel it, you know, so that they could be on the same page with me."

In this group, though, no one is on Feldman's page, which is lucky for them. He appears to be in pain almost constantly. He overreacts at the slightest criticism from Manthey, he blows up and swears at Hammer, and he clashes with Carteris from beginning to end. One night when they're all camping, Feldman tries to express the unbearable pain of being a child star: His parents blew all his earnings, they didn't give him what he needed emotionally, etc. It does sound pretty sad, but Hammer won't have any of it: "A celebrity should never talk about [how] they got a tough life. It is so wimpy to complain!" Everyone laughs and claps and Feldman stares at his hands. Of course, fellow former child star Lewis isn't helping Feldman's case much by being 4 feet tall and a good sport about everything, from being buried in the sand from the neck down to playing softball with women twice his size.

But even when Feldman makes a big effort to be positive, everything still falls apart. On the day before his wedding (which is also the show's finale), Feldman gathers the group and attempts to rally them, saying, "I really am excited that you're all gonna share the wedding with me tomorrow, and everybody's happy ... I'm sorry ..." Suddenly, he breaks down crying, and everyone looks startled except Vince Neil, who appears to be stifling a laugh. Finally, Roderick asks, "Do you need help packing?"

The next day at the wedding, the bride's mother creepily tells the camera, "When Susannah was a little girl, she watched a movie, 'Stand by Me,' that Corey was in. And later on that day, we found a note that she wrote that said that she was in love with Corey Feldman and she wanted to marry him. Destiny has a way of finding its way to you!" It has an especially easy time finding you when your dream is to marry one of the Coreys.

Still, by the end of "The Surreal Life," thanks to great editing, the cast feels familiar and likable, and it's almost sad to see them go. In contrast, every dismissal from the set of "I'm a Celebrity, Get Me Out of Here!" is purely a relief. Watching that show, night after night, you eventually start to feel as if you're suffering through the mud and the dull stories right along with the pseudo-stars, which can't be the best way to win good ratings.

As long as those bloated demi-celebrity egos still explode spectacularly outside the carefully calibrated environments they're accustomed to, reality TV scientists should ditch the mud and the mealworms and stick to short, fun, heavily edited formats. After 15 hours in the driving rain, we might even get tired of the Osbournes.