"A Dangerous Place" by Marc Reisner

Plunged into the Bay? Smothered in the superstore? Californians may have forgotten about their looming apocalypse, but eco-journalist Marc Reisner's final work is here to remind them. 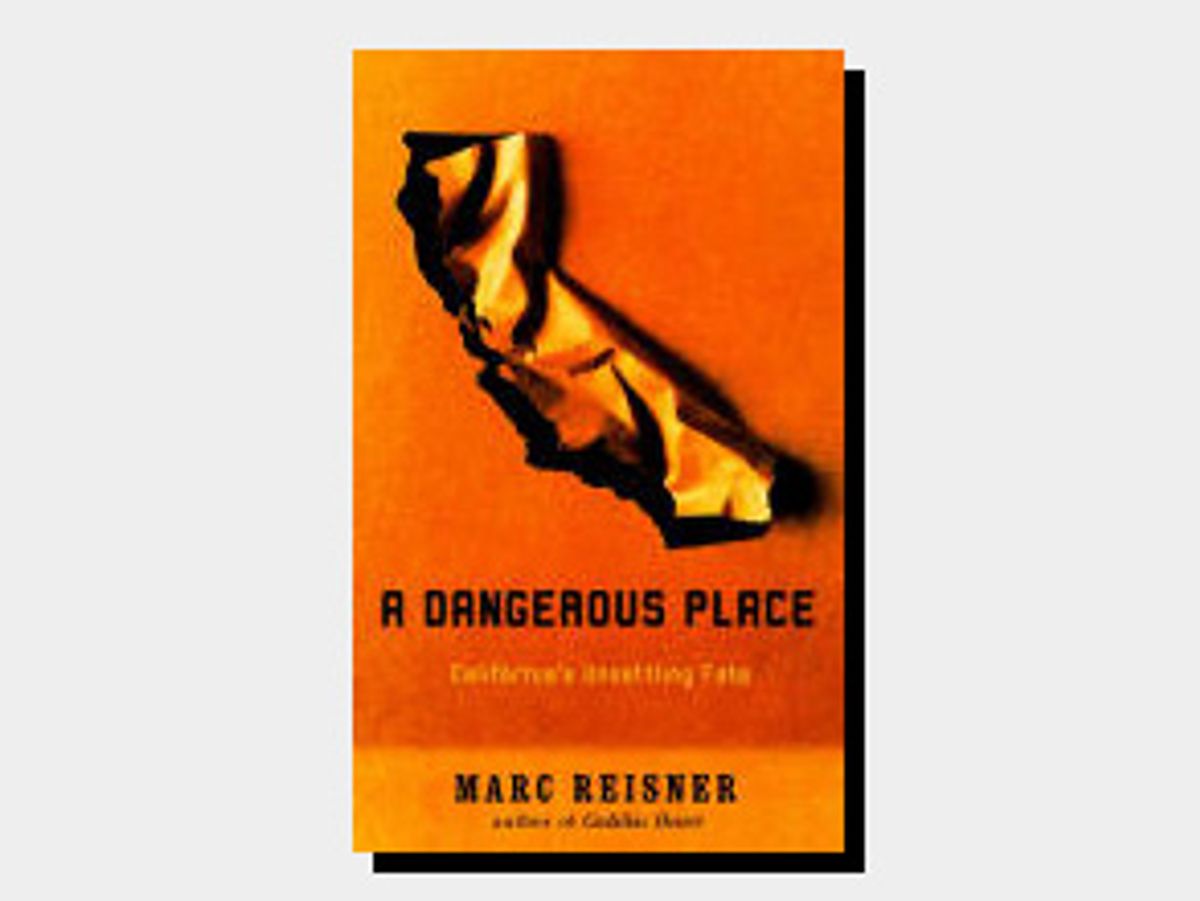 The official federal terror forecast has mellowed from "tell your wife you love her right now" orange to "don't panic just yet" yellow.

But if you live in California, this is no time to stop biting your fingernails.

Because while you were up at 4:37 a.m. busy fretting about smallpox, dirty bombs, and whether you really had enough duct tape for the apocalypse, you forgot that you're living on top of a disaster waiting to happen, no evildoers required.

The late Marc Reisner's posthumously published jeremiad, "A Dangerous Place: California's Unsettling Fate," is a brusque reminder that most Californians have settled "where they shouldn't have," with some 80 percent of the state's population now teetering atop active seismic zones -- earth that wants to move.

But this little book goes beyond the usual Chicken Little routine about earthquakes, familiar to any West Coast kid schooled in the basics of subduction and lurching continental plates. Reisner, who died of cancer in 2000 at the age of 51 before finishing the manuscript for "A Dangerous Place," made the history and politics of water in the arid West into a page-turning narrative for non-hydrologists with his 1986 opus "Cadillac Desert: The American West and Its Disappearing Water."

In his final work, he links the prospect of the Big One hitting the Bay Area or L.A. to the staggering network of dams and levees that bring water hundreds of miles to California's sprawling urban centers (and also keep water from flooding the Central Valley's rich farmlands). When the plates of the earth shift, so does all that water, and that great sucking sound you heard is the echoing of this well-worn truth -- nature abhors a vacuum.

In a 7.2 quake, Reisner fears not only for the thousands of lives likely to be lost in the collapse of bridges, unreinforced masonry buildings and cheaply built retail stores. He's worried about the state's whole way of life, which is balanced precariously on its improbable water supply. "If the contrived flow of water should somehow just stop, California's economy, which was worth about a trillion dollars as the new millennium dawned, would implode like a neutron star," he writes.

"A Dangerous Place" feels like the rushed work of a dying man, sounding the alarm for his home state, written as he's about to leave it. But this brief stress-out, finished up by the author's wife and editor after his death, certainly succeeds in roiling old fears and dishing out new worries.

Reisner delights in reminding us of the irascible California forefathers who got us into this mess, reveling in the shysters, misfits, adventurers, hustlers and greedheads that made their fortunes marketing arid California as a farmers' paradise. This will be familiar stuff to readers of "Cadillac Desert," but the highlight reel found here is still freak-show fun.

By the middle of the 19th century, Los Angeles was a "filthy, drowsy, suppurating, dunghole" boasting streets vernacularly known as "Nigger Alley" and "Cunt Lane," where the cultured populace's idea of entertainment was tying a bull and a grizzly bear together just to see which mauled the other to death first.

But San Francisco was no more lily-fingered.

In that city's Gold Rush heyday, water was so scarce that a bath cost $10 to $15 in today's terms, and laundry was literally shipped out to Hawaii. (Confidential to PETA: It was an animal-lover watching mules haul water up San Francisco's steep, slick, filthy, hilly streets who invented the cable car to ease their burden.)

In just eight years, those unwashed gold miners ate their way through the great herds of pronghorn antelope and elk of California's Central Valley, which were said to be so numerous they rivaled the bison of the Great Plains. Yet fruit and vegetables were so scarce that when someone figured out how to clear the water from the natural sloughs and marshes that meandered across the Sacramento-San Joaquin Delta, that entrepreneur made more money selling melons to miners than Zachary Taylor, the president of the United States, did the same year.

That cleared, then irrigated, delta of rich peat has become California's botanical gold mine. But in the last century and half or so that it's been farmed, it's been sinking, just like Holland, turning into a bona fide netherland. The deepest acre, Reisner reports, is now 21 feet below sea level.

That's little more than an odd land-use factoid until you start to think about what happens when the tectonic plates give a really good shift, and the dikes -- or levees as they're called here -- start to give.

While agriculture has reclaimed the delta land from the waters, the population boom in the Bay Area has literally made land out of water. Here Reisner is in more familiar, if conveniently repressed, territory for the average Bay Area resident. The Marina District has become "a mecca for Financial District yuppies who work, sleep, network, and jog on what used to be water," he reminds us. San Francisco and the surrounding cities have created a whole civilization of airports, military bases, freeways, bridge approaches, ports and apartment complexes on "semi-saturated pseudo-terrain ... This is land in the loosest sense of the word."

If you want to picture how that landfill might react during a really good shake -- a phenomenon known by the delicious word "liquefaction" -- Reisner recommends sautéing a slab of Jell-O.

After a quick review of the state's quake history, Reisner goes into full prognosticator mode, imagining what would happen if the Really Big One -- say, a 7.2 magnitude quake -- hits the Bay Area in 2005, releasing energy equal to thousands of Hiroshima bombs and sending the Golden Gate Bridge rippling up and down 7 feet at a flop.

Reisner's horror show predicts hundreds dead as they're pitched off the Bay Bridge, which will become abruptly gap-toothed as huge sections simply fall down. Sure, every local who's ever been stuck in a traffic jam on that double-decker expanse has idly wondered what it would be like to plunge to the waters below when parts of the bridge come crashing down, as it did during the 1989 Loma Prieta quake. Would you die on impact with the surface, or be crushed by an upper deck, or drown trying to break the window of your partially submerged car, or succumb to hypothermia while treading water, waiting to be rescued?

But Reisner trots out more novel ways for this great quake to kill you. He points out that many big-box stores, those retail establishments featuring bulk goods in warehouse settings, are built on landfill. Since they survive on razor-thin profit margins, they're built on the cheapest land. "If the roof doesn't flatten you, the merchandise will," he writes. Imagine being buried alive under two dozen crates of toilet paper, or an avalanche of 800,000 Reese's Pieces.

Between the falling bricks in San Francisco's Chinatown, the fires in the Marina, and the boiling sand erupting 8 feet high from the innumerable roads built on fill, Reisner forecasts 3,000 dead within 24 hours.

That leaves 6 million people still alive of course, with no way to get across that lovely bay they feel so smug about living on.

As a bonus, flooding in the delta has turned California's agricultural belt into an enormous puddle: "Its gridwork of farmed fields inside huge levee-ringed tracts of land has transmogrified into a vast sweep of water, miles and miles across," Reisner writes. There's salt in that water, as San Francisco Bay pours into the wetlands that usually stand cleared of its tidal waters. Such an earthquake could put not only much of Northern California's water supply at risk, but half of Southern California's as well.

For the contemporary reader, there's something almost quaint about Reisner's what-if hallucination of earthquake devastation. Remember when we worried about natural disasters instead of terrorism? The author did not live to experience 9/11, so the figure of 3,000 deaths he predicts here has a tragic association Reisner could never have predicted.

But his last work's final insight holds up, whether or not you cotton to the extent of the death and damage that he imagines.

Much as Reisner sounds the alarm, there's simply too much human investment in this land, transformed into a residential and agricultural paradise by a bunch of shysters and land-scammers in the 19th century, to turn back now. "Fate, whimsy, ignorance and sheer will -- any number of things conspire to put a city where it is," Reisner writes. "Once it's there, and it's big enough, it's there forever."

His final prediction: When the Big One comes, some survivors will leave the state, but most Californians will just pick up and rebuild, right back on top of the same shifty earth. If and when that happens, it's too bad Marc Reisner won't be here to write about it.