Alleged U.S. spying at the U.N. -- huge news in the rest of the world, ignored here -- provides fodder to festering anti-Americanism. 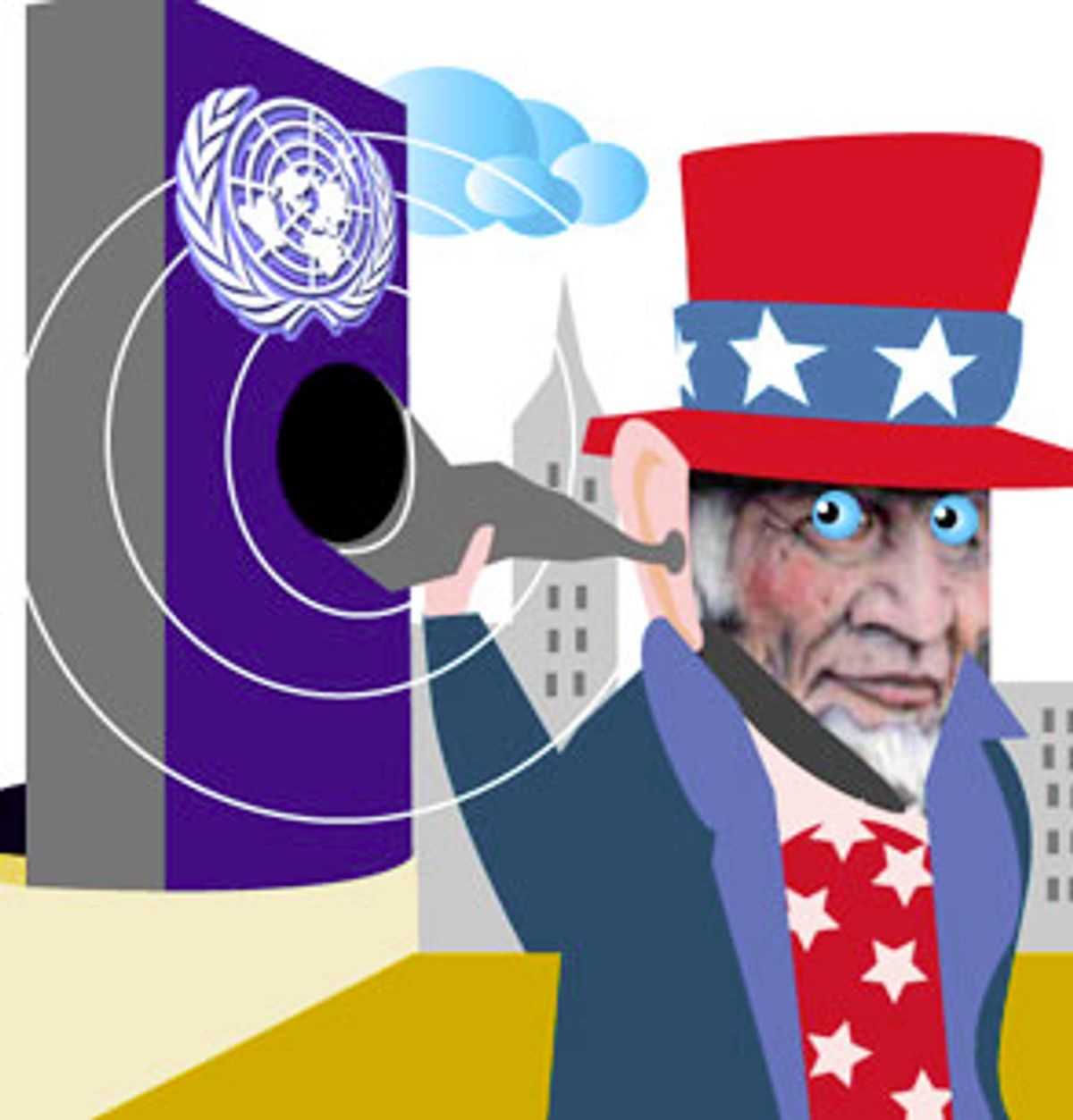 Just when you thought the United States' worldwide unpopularity couldn't plunge to greater depths, a story in Sunday's London Observer reported that in preparation for another possible United Nations vote on military intervention against Iraq, the U.S. government was engaging in "dirty tricks" by conducting surveillance on members of the U.N. Security Council.

The story was based on a memo allegedly sent by a National Security Agency official seeking surveillance information on the thoughts of U.N. Security Council delegates for countries that remain either opposed to or undecided on the war against Iraq.

"We have no statement to issue," a spokesman for the NSA told Salon. The White House similarly refused comment. "As a matter of long-standing policy, the administration never comments on anything involving any people involved in intelligence," White House spokesman Ari Fleischer said in a Monday afternoon briefing. According to the LexisNexis news database, the only U.S. media outlet to bring the memo up by Monday was Fox News Sunday anchor Brit Hume. Sen. Pat Roberts, R-Kan., a member of the Senate's Select Committee on Intelligence, told Hume that he hadn't seen the memo, but theoretically such surveillance "would be very aggressive" and might be "a topic of a hearing on the Intelligence Committee which probably would take place in the very immediate future." But no major American newspaper had run with the story.

That wasn't the case overseas. "It's a big story in Russia and it led the French news today," said Martin Bright, the Observer's home affairs editor. Bright, who helped write the story, was reached on his cellphone as he drove home from an interview with Canadian TV. Bright said that he had agreed to interviews with NBC, CNN, and Fox News Channel -- and that all three had called and canceled. But the report that the U.S. is spying on U.N. Security Council members -- and seeking allied intelligence agencies to do the same -- has quickly spread throughout the world. "U.S. Spying on U.N. Delegates to Win Vote on Iraq War: Paper," headlined a newswire in Japan; "Uncle Sam Spies on U.N. Delegations," said the Australian; "U.S. in 'Dirty Tricks' Battle to Win Vote on Iraq War: Report," said Agence France Presse.

What might be most telling about the episode, however, is not that the U.S. is spying on U.N. Security Council members in search of information "that could give U.S. policymakers an edge in obtaining results favorable to U.S. goals or to head off surprises," as the memo states. Spying at the United Nations is nothing new, nor is it necessarily nefarious. Rather, the story is significant in that it reveals much about the way that the Bush administration has handled its foreign policy: clumsy or arrogant or righteous, depending upon your point of view, but indisputably alienating to most of the rest of the world. The media maelstrom the memo has set off as far away as Sydney and Moscow is indicative of how much the U.S.'s reservoir of goodwill has dried up.

"As you've likely heard by now," the Jan. 31 memo, from Frank Koza -- chief of staff in the Regional Targets section of the NSA -- reads, "the Agency is mounting a surge particularly directed" at Security Council members -- with the exception of the U.S. and the United Kingdom -- "for insights as to how the membership is reacting to the on-going debate RE: Iraq, plans to vote on any related resolutions, what related policies/ negotiating positions they may be considering, alliances/ dependencies, etc."

In the memo, Koza says that his division will be reviving and creating efforts "against" Security Council members "Angola, Cameroon, Chile, Bulgaria and Guinea" as well as putting an "extra focus on Pakistan U.N. matters."

All six countries are members of the U.N. Security Council who are being lobbied by the U.S. and British in favor of military action against Iraq, and by the French and Germans in opposition.

When the story broke Sunday there were initially questions about the legitimacy of the memo by the Drudge Report and the Washington Times, which noted that the memo used British spelling of several words. But the Observer subsequently fixed the memo and added a clarification, noting that it had "reverted to the original US-spelling as in the document leaked to The Observer." Questions about its credibility seemed to vanish when no one in the government disputed it.

Many in the media took the White House's non-denial as an confirmation. "If you're a Cameroonian diplomat or a French diplomat at the United Nations, because of what you just said, you're going to have to operate on the assumption that the United States is bugging" your office, one reporter said to Fleischer.

"No, no," Fleischer responded. "It's a blanket matter of policy that we do not answer questions of that nature."

Wayne Madsen, a former communications security analyst with the NSA in the mid-1980s -- and currently a senior fellow at the Electronic Privacy and Information Center -- said that such a "no comment" policy is indeed standard operating procedure. But Madsen also thought the memo looked authentic, and he hypothesized that it had been written to the intelligence agencies of the four other countries -- Australia, Canada, New Zealand and the United Kingdom -- which together with the United States comprise the Echelon global intelligence network. Madsen says that as a result of the report, "the U.S. has egg on its face" chiefly because of the timing, since the U.N. Security Council is debating whether to vote on a second resolution.

When reached for comment about the Observer article, Ambassador Stefan Tafrov of Bulgaria said, "I have no comment on that story." The immediacy with which he indicated he knew which "Observer story" this reporter was asking about suggested he was more than a little aware of the report. The speed with which he hung up spoke volumes, as well. When reached by Salon, Jules Kamga, press officer for the Cameroon Mission to the U.N., said, "I saw the story but we have nothing to say. The facts are not verified yet"

Not that news of the memo should have come as a surprise to anyone.

"This is standard procedure," says David Phillips, a former senior advisor to both the State Department and the U.N.'s Office for the Coordination of Humanitarian Affairs, and a senior fellow at the Council on Foreign Relations. "There's nothing atypical about monitoring the comings and goings of foreign diplomats in order to assess their likely behavior in diplomatic form."

"Everybody spies on everybody at the U.N.," one former State Department official reiterated to Salon under condition of anonymity. "You can call it spying or you can call it vote getting, but when you're conducting a get-out-the-vote drive -- which is what this is -- you try to get information any way you can." Americans are hardly the worst offenders of this sort of information gathering, the official went on, noting that "any businessman knows not to discuss his trade deals when he's traveling on Air France."

"Unfortunately," the former State Department official went on, "this is clumsy diplomacy by the Bush administration: the fact that the memo got out and even more so that it's being played this way despite the fact that everyone knows this kind of thing goes on all the time." It's further indication, the official said, of how upset other countries -- including "our closest allies" -- are "over the strong-arm tactics in New York."

The official tied this story to the revelation that much of the fabled 19-page British intelligence dossier -- hailed at the U.N. by U.S. Secretary of State Colin Powell as a "fine paper ... which describes in exquisite detail Iraqi deception activities" -- was plagiarized from a graduate student writing in the Middle East Review of International Affairs (and reproduced the student's grammatical errors and typos). "It's just characteristic of how poorly the administration has made an arguable case," the former official said. This, too, is a "bad story," and the fact that no one in the Bush administration seemed to be doing anything to counter it -- even by just pointing out how common such information gathering at the U.N. is -- was typically arrogant. "Silence is not the way to handle this."

To others, the incident bespoke other matters. "We seem to be spending as much energy in trying to underwrite a war that we are already committed to as we are in any genuine effort at diplomacy to get to any other outcomes," added Shepard Forman, director of the Center on International Cooperation at New York University.

Noting that the story "only suggests information gathering -- it doesn't suggest any sort of clandestine effort to influence behavior," Eric Schwartz, a former national security official in the Clinton administration and the director of a Council on Foreign Relations-sponsored independent task force on post-conflict Iraq, thus wondered why the Observer story labeled it "dirty tricks." "I suppose on one level it has to do with the issue in question, which is a highly charged issue, and which has caused a great dispute between the United States and the Europeans," Schwartz said. Because of those tensions, the memo thus became "part of the ammunition in the debate."

Added his CFR colleague Phillips, "the Franco-German axis is looking for reasons in order to justify their waning influence in the Security Council, and they're groping for straws and this is one of them."

Underneath it all lies the question of the leak itself. After all, the kinds of people who receive such memos are typically not the sort with loose lips. To former NSA analyst Madsen, the leak indicates that there are some looking to sink the ship -- the battleship to Iraq, at least. In "British intelligence there are clearly those who are just as upset with [British Prime Minister Tony] Blair as there are members of the CIA and our own intelligence forces who are upset with Bush," Madsen said. "They don't think the casus belli has been made for going into Iraq. They feel like they're being encouraged to cook up evidence."