A radical Islamist warns of another big attack soon, while U.S. experts debate: Did the arrest of Khalil Sheikh Mohammed make us more or less safe? 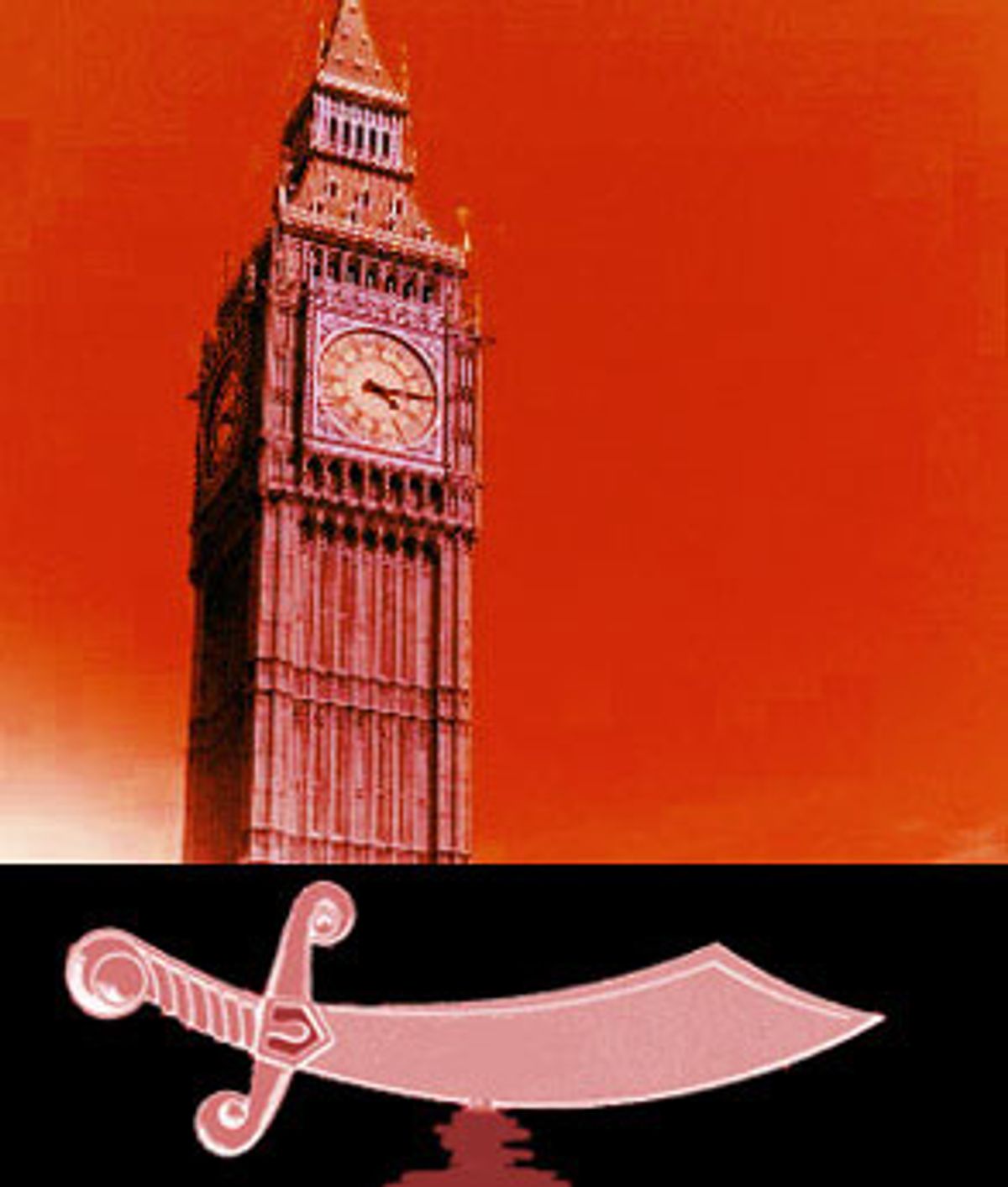 Omar Bakri Muhammad, a supporter of al-Qaida and the leader of the London-based Islamist group al-Muhajiroun, has heard such chatter before.

He claims he heard mention of "Failaka" right before the October 2002 attacks against the U.S. Marines on that island that killed one American soldier and injured another, 10 miles east of Kuwait City. He also says he heard vague mention of an attack against Westerners a week or so before the Oct. 12 Bali bombing at the Sari nightclub where more than 180 were killed. The information got even more specific in November, when Bakri claims he heard that there would be a bombing in East Africa, about 10 days before the suicide bombing of an Israeli-owned resort hotel in Mombasa, Kenya, that killed 12, and a misfired missile shot at an Israeli plane carrying 261 passengers and crew.

Bakri went on the Al Jazeera network right after that attack to say he had heard about it. "Members of al-Qaida warned via the Internet that they would attack godless interests in that region," he said.

And Bakri's been hearing something similar these days.

"There is going to be an attack on U.S. forces in the Asian subcontinent," he told Salon in a Wednesday phone interview. Bakri says he read this news on a short-lived "loose link" temporary Internet chat room, heard about it from clerics who have recently spent time in the Gulf, and had seen a report on Al Jazeera from a reporter with good sources in al-Qaida. "Good news for Muslims," one of the Internet messages said, approximately a week ago, "in two weeks time there will be another attack on the Crusaders like Sept. 11."

"From my experience from those warnings 10 days before the bombings in East Africa, from what happened in Kenya, this indicates a serious threat," Bakri tells Salon.

Central Intelligence Agency spokesman Tom Crispell told Salon that such matters were "not something we would comment on."

How seriously one should take Bakri is always a matter for debate -- to some he seems a genuine menace, to others he's just a loudmouth. When I first met him and some of his angry ragtag gang last October in London, they were proceeding to a rally where they were planning on protesting the arrest of one of their chums, Abu Qatada, and he seemed real enough to me. But regardless of his individual credibility, the larger question Bakri poses is one that U.S. policymakers are currently wondering about: How great an achievement is the weekend arrest of al-Qaida chief operative Khalid Shaikh Mohammed? More to the point: Are we any safer now?

Of course there is no definitive answer to this, and as President Bush noted in his September 20, 2001, address to the nation, "This war will not be like the war against Iraq a decade ago, with a decisive liberation of territory and a swift conclusion."

Bakri's predictions aren't the only ones. A Feb. 28 report in the London-based Saudi daily Al-Sharq Al-Awsat reported that Islamist sources indicated that a terrorist operation might be launched against American military forces in Afghanistan that would "incite Islamists everywhere to carry out suicide activities against the Americans." One of these reports, however, noted that the attacks were called for the moment of "the outbreak of the war against Iraq."

"The discussion among Islamists revolves around threats to be carried out by 'sleeping cells' in the Al-Qa'ida organization against targets in the United States or in the [Persian] Gulf where thousands of American soldiers who would invade Iraq are stationed," the newspaper wrote.

On Feb. 24, the Islamist Web sites www.alfjr.com and www.arabforum.net announced an imminent terror attack on the U.S., perhaps within its borders, as the exhortations beseeched Allah "to protect our brethren who went out to meet the enemy inside his own home."

"It is only a matter of a few days, a little more than 10 or less until we hear the cry announcing to us the good tidings of Allah's victory, by the hands of our brethren, the Jihad fighters. This is a serious matter and not a joke," the message reported. "The train of death is on its way. Its riders are steadfast."

Both the Al-Sharq Al-Awsat newspaper report and the Web site message were translated by the Middle East Media Research Institute, an organization whose translations are considered reliable, though it has been criticized by Arab organizations for only translating the most extremist writings. Those, of course, are the ones of most interest right now to the U.S. government. How much of it is credible information is, of course, another matter.

Neil Livingstone, chairman of the global security firm Global Options and an expert on worldwide terrorism, says that while he can't comment on the credibility of any of this information, "there's no question that al-Qaida's out there and they're trying to get something done -- it's why we went to a high alert status" a couple weeks ago.

After security was tightened up and specific targets -- ships and certain individuals, primarily -- were moved, that status was officially changed, Livingstone says, though the threat didn't necessarily diminish. "You wear people out if you stay on high alert status for too long," Livingstone says. "People start to get cynical about it."

Though the U.S. government has hyped the weekend arrest of Mohammed -- on Tuesday, Attorney General John Ashcroft cited it as one of "three reasons why the United States is winning this war" on terrorism -- Bakri says that those with knowledge of the organization don't think Mohammed has had much to do with Osama bin Laden himself in almost a year. "I don't think the arrest will have any impact on al-Qaida," Bakri said.

Terrorism experts dispute this, noting that Mohammed was responsible for far more day-to-day operational matters than is bin Laden, and that his capture is indeed the major victory Ashcroft crowed about. "It's all nonsense," one terrorism expert who has worked with the U.S. government said of Bakri's statement. "These guys have been hit so hard they're trying to find a center of gravity so the world believes they can still strike out."

Mohammed's arrest, this expert says, is a real cause for celebration. Combined with the disruption of terrorist cells all over Europe, "I don't see where the threat comes from right now. Bin laden is nothing more than a philosophical motivator, but he can't even raise money anymore. [Ayman Al-] Zawahiri is both a philosophical motivator and a strategist but he's not an operations guy -- it still takes someone to implement that strategy," and that somebody was Mohammed.

Interestingly, however, Livingstone says that Mohammed's capture creates one big concern. It's good news because he was the No. 2 man on the FBI's list of most wanted terrorists, but bad news because in the short run it increases the incentive for al-Qaida to carry out any of its terrorist plans. "They're likely to show that, while they've taken a big hit, they're still viable and still out there," he says. "Also they know that if Mohammed is coerced into talking," that would jeopardize plans for pending action, "so if they've got a project that's almost ready to go, they know they gotta do it real quickly."

Bakri said that he didn't think the messages were referring to the Feb. 28 attack on Pakistani police officers guarding the American Consulate in Karachi. "Al-Qaida, when they speak of something like 9/11, I don't think they would do a small operation," he says. The Karachi attack was "most likely done by supporters of al-Qaida," not al-Qaida itself.

Tuesday's bombing of Davao City International Airport in the Philippines has been blamed by the Philippine military on the Moro Islamic Liberation Front, though according to Agence France-Presse the Abu Sayyaf guerrilla group claimed responsibility for the bombing on Wednesday.