"Bringing Down the House"

Why are white guys who can't dance still funny? In this shameful Steve Martin bomb, they're not. 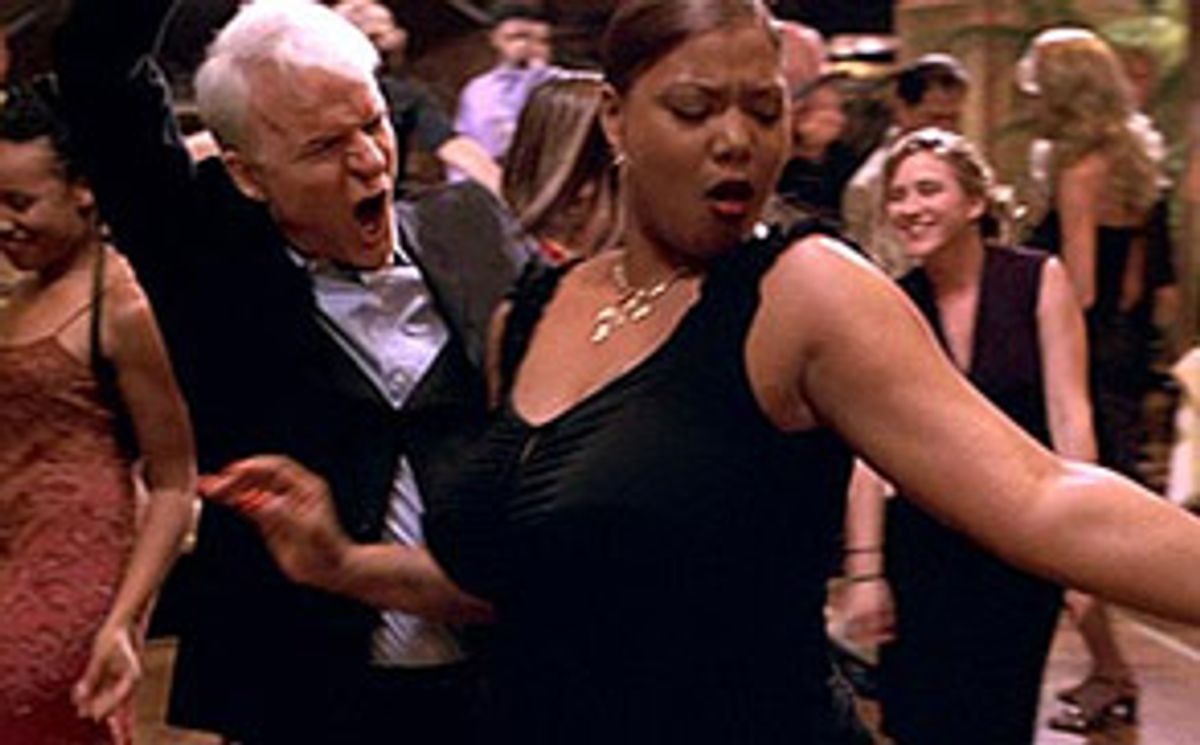 "Bringing Down the House" is for everyone who finds the idea of a white person saying "bitchslapped" hilarious. The movie appears to have been made for an audience that considers the idea of black people terribly exotic. And just who, nowadays, is that, some 30 years after the birth of rap and with hip-hop style everywhere in pop culture? "Bringing Down the House" seems to be aimed at people who want to consider black style in dress or speech or music some sort of passing fad -- you know, one of those crazy things the kids do before they settle down and start wearing Dockers and listening to Dave Matthews.

The paucity of comic imagination in Jason Filardi's script and Adam Shankman's direction is at first just disappointing, and then wearying and finally rather offensive. In just how many movies can we see a white guy dressed up in Enyce and a doo rag and be expected to find it side-splitting? How many times do we have to watch a dorky white guy's lame attempts to bust a move on the dance floor and be asked to fall on the floor laughing? In the early '80s, when Anthony Michael Hall lapsed into a pimp's rap in the mind-boggling John Hughes disaster "Weird Science," the bit had some bite because it had an inflammatory edge. The discomfort was what made it funny. (Think Mickey Rooney's outrageous turn as a Japanese photographer in "Breakfast at Tiffany's.")

What's offensive in "Bringing Down the House" is the way the jokes have been calculated not to offend. As we watch Steve Martin all hooded out as he makes his way through a black club, the joke is meant to be on his character. But the subtext of the scene is that the style Martin is affecting is in itself ridiculous. It seems to be saying that it's OK for black people to make clowns of themselves like this but that nobody you'd see shopping in Talbot's would act this way.

Martin plays a tax attorney who's struck up an Internet correspondence with someone he believes to be a slim, blond lawyer. He arranges a rendezvous at his house only to have his pen pal turn out to be a black convicted armed robber named Charlene (Queen Latifah). When Martin tries to give her the air, Charlene threatens to turn his life upside down unless he takes her in and works to expunge her record (she swears she's innocent).

Charlene may not be the girl of Martin's dreams, but his friend and colleague Howie (Eugene Levy) falls for her. Soon, like some inadvertent replay of "Imitation of Life," Charlene has moved in and taken care of all the family problems, teaching Martin's little tyke how to read, decisively dealing with the teenage daughter's tentative stab at rebellion and coaching Martin on how to get back with the ex-wife (Jean Smart) he still loves.

And yet while the white characters are written and played more broadly than the black ones, the white stereotypes play right into what's insulting about the movie. Shankman and Filardi miss the joke about affluent white racists, which is that they don't consider themselves racists. Most of the white people in the movie are flat-out racist boors. And though the movie is shaped for us to see Queen Latifah scoring off of them, it still means we have to watch scenes where she's called "Jemima" or, in one horrendous sequence, must dress up in a maid's uniform to impress the rich conservative client (Joan Plowright) Martin is trying to woo to his law firm. (Just why this is necessary makes no sense. Plowright has been told that Charlene is the family's nanny and has seen her in mufti. And nobody connected with the picture seems to have found it odd that a woman speaking with Plowright's English accent would be reminiscing about the Negro spirituals the servants sang on the tobacco plantation where she grew up.)

Apparently, neither Shankman nor Filardi realized that, while "Queen" is a self-proclaimed honorific, Latifah has earned it. The woman is a goddess, and in "Bringing Down the House" she's cocoa Teflon -- no crappy, demeaning gag sticks to her. The one thing the movie gets right is that, while Eugene Levy's attempts to woo her are played for laughs, the movie never makes fun of the fact that he's hot for her. Who wouldn't be? With that generous build and those Asiatic eyes, which can be either warm or sly and knowing, she's a stunner. I wanted more of her and Levy, not only because the two of them barely get a chance to show how funny they can be together, but because the scenes they share are just about the only ones where she's accorded the adoration she deserves. Queen Latifah probably has it in her to be something like a black Mae West, but she's more inviting, truly sexy instead of just presenting a parody of sex. When she comes on screen in "Chicago" to sing "When You're Good to Mama," the audience goes nearly wild. She deserves a better follow-up than this glorified maid role.

You have to look hard for good bits in "Bringing Down the House": the singer Kelly Price performing in a club, or Levy getting off one really good crack on Joan Plowright. You don't have to look nearly so hard for the groaners or the cluelessness. When Charlene explains that her boyfriend (Steve Harris, playing a thug the exact same way he plays a lawyer on "The Practice") hangs at a club called "The Downlow," I wondered, was there no one to explain to the filmmakers that one of the slang uses of "on the down low" is for a guy who's in the closet? (But when nobody blinks at a rapper named Nelly, I suppose it can be forgiven.)

What's most depressing is that "Bringing Down the House" has all the earmarks of being a big hit (it's dumb enough and crude enough), and that includes being a hit with black audiences. Those scenes where the insults are hurled at Latifah as set-ups for her stomping the fool have, it seems, been designed to get black moviegoers cheering -- even though it entails putting a gorgeous, charismatic black woman through the wringer. "Bringing Down the House" is shiznit. And I don't mean da shiznit.