"Tears of the Sun"

Can Bruce Willis save Africa from the Africans? Not in Antoine Fuqua's overwrought, blood-drenched fable of bogus Hollywood heroism, he can't. 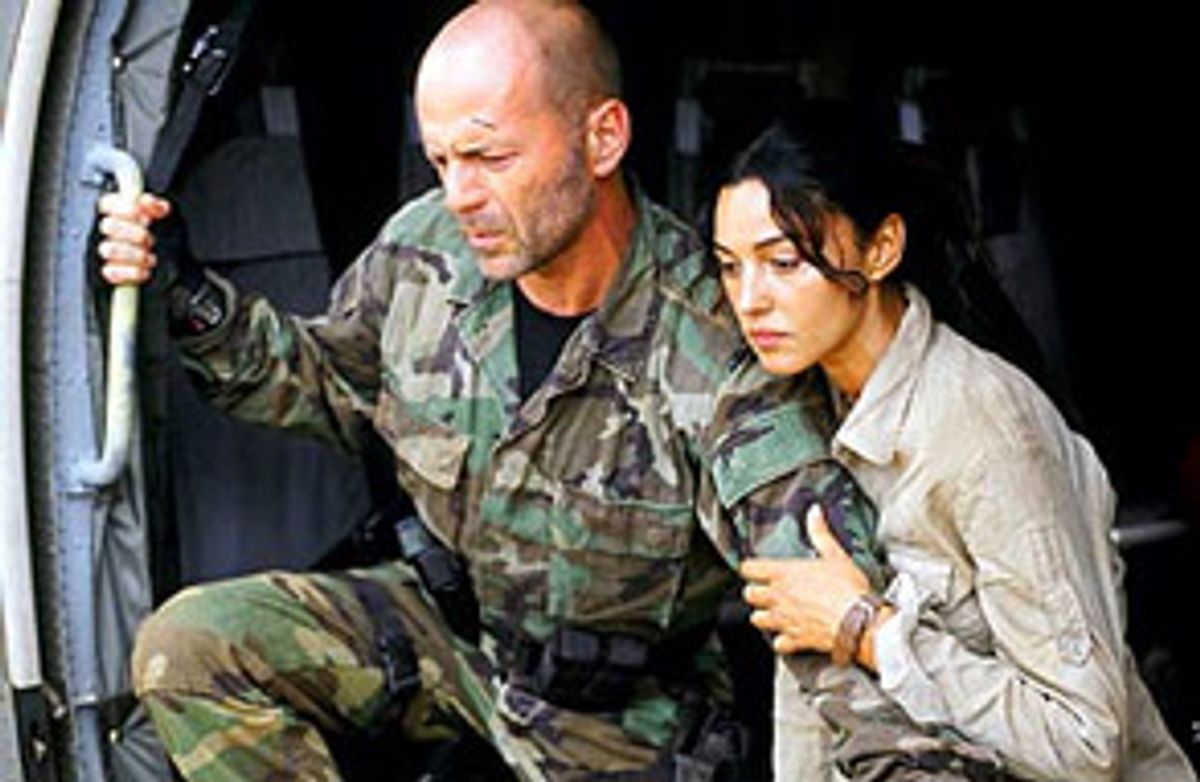 God save us from directors who, with the best intentions, use real-life atrocities as a backdrop for the same old Hollywood heroism bunk. Antoine Fuqua's "Tears of the Sun" is a fictional story that takes place in Nigeria after the democratic government has fallen and the country has been taken over by a zealous military dictator, who, as one of the movie's tough-guy characters informs us in swinging military-ese, wants to get rid of anybody who "goes to the wrong church."

Bruce Willis is grizzled old-hand Navy SEAL Lt. A.K. Waters (in his first scene, the sun glints off his manly razor stubble magnificently), who has been assigned to lead a squadron deep into the jungle wilderness to retrieve an American-by-marriage doctor, Lena Kendricks (Monica Bellucci), and escort her to safety. They have no interest in rescuing the 30 or so "indigenous" refugees under her care -- at least not at first.

There's nothing wrong with using Hollywood techniques and traditions to connect us with real human suffering: Brian De Palma did it with "Casualties of War" and John Boorman did it with "Beyond Rangoon," to name two of the best examples. But you can't use Hollywood hokum to force the same goal, as Fuqua (the widely acclaimed director of "Training Day") does here.

There's a fine line dividing Hollywood tradition and overly manipulative junk, and "Tears of the Sun" crosses it. The movie is clearly supposed to be about the humanity of soldiers and the complex moral decisions, often made in the heat of combat, that shape them as people. To that end, we get lots of quiet shots of Willis as he fixes someone or something with a quizzical stare -- he's beginning to work out a moral puzzle for himself, right before our very eyes. We know this because he says things like, "It's been so long since I did a good thing -- the right thing." And later, "I broke my own rule. I started to give a fuck."

Willis' Lt. Waters witnesses some genuine horrors. Fuqua shows us real suffering, all right, and they're all versions of things that we know have happened in real life in places like Sudan, Nigeria and Ethiopia in the not-so-distant past, and the present. We get an aerial view of a mission in which every inhabitant has been brutally slaughtered: Their bodies lie lifeless far below the camera, but their deaths still seem fresh and raw and painful. We see a young mother who's slowly bleeding to death, and learn that her breasts have been cut off by rebel guerrillas. Though Fuqua doesn't actually show us these acts, he does make us feel their brutality, although his images are often accompanied by swollen string music courtesy of Hans Zimmer, in case we're so inhuman as to fail to connect with their inherent drama and sorrow.

But what's deplorable about "Tears of the Sun" is that Fuqua is using depictions of these horrors to buy street cred for the slick ineptitude of the movie around them. "Tears of the Sun" seems to have been built on the theory that if the atrocities depicted seem real, the heroes will seem even more so. It's a blend of cold reality and cartoonishness that's a bit like Gene Kelly dancing with an animated mouse, though a lot less charming. When Waters realizes that one of his men has spotted some guerrilla activity nearby, he asks, "What do we got?" The soldier replies, in a tone that suggests he's been reading too many "Sgt. Rock" comics, "Ringside seats to an ethnic cleansing."

There are countless places where "Tears of the Sun" is so broad it feels like parody. A shot of a Navy ship early in the movie carries the legend "Somewhere off the coast of Africa" -- it's such a tiny land mass, after all, that it doesn't much matter which part of Africa we're talking about. Bellucci tromps through most of the movie looking like something out of a Ralph Lauren ad; she treks through the jungle with her rumpled shirt half-open, her hair in flowing waves unaffected by humidity, her skin lustrous and dewy. But she's principled all right: At one point she realizes Waters has betrayed her, and her Latin passion, along with the movie's author's message, rises to the surface: "Who decides for me? You? Your government? Bastards!" You'll see lots of other old favorites in "Tears of the Sun": Just as a rebel's long silver knife comes down on a frail, elderly missionary's neck, we get a fast cut to a flock of white birds startling noisily out of a tree. It's a discreet treatment of violence, and also a complete cliché. If you've never seen the old "rustling warthog being mistaken for an enemy soldier" routine, now's your chance. During the climactic battle sequence, the music on the soundtrack isn't Samuel Barber's Adagio for Strings -- but it's pretty damn close. And elsewhere we get a close-up of one of Dr. Kendricks' refugees clutching a dying woman's hands, trembling with her final breath, followed by -- stillness.

Then there's the dialogue: "There are a lot of possible scenarios that can happen, Dr. Kendricks. I don't pretend to know them all." Who thinks up this stuff? In this case, Alex Lasker and Patrick Cirillo. (It's important to note that Lasker also wrote and co-produced "Beyond Rangoon" -- which may mean nothing at all, or may mean that screenwriters frequently have little to do with how their stories finally get translated into movies.)

The sermonizing in "Tears of the Sun" flows like hot syrup. One of Waters' men is Zee (Eamonn Walker, of HBO's "Oz"), an African-American, and he shows us, with just a flicker of an eyelash, how he's affected by the tragedy around him, visited by Africans on other Africans. But Fuqua can't leave it at that. He has to give Zee a speech in which he bolsters the troubled Lt. Waters: "Those Africans are my people too. For all the years we've been told to stand down, stand back -- you're doing the right thing."

There's evidence that many of the actors in "Tears of the Sun" know what they're doing, or would know, if they had only been lucky enough to be in a different movie. Willis is chief among them. It's often hard to convince people that Willis is an incredibly subtle actor, even when he's playing an action hero. (I can't watch the scene in "12 Monkeys" in which he hears "Blueberry Hill" on the radio without bursting into tears.) In "Tears of the Sun," he seems to be doing the best work he can in an absurd vehicle. He gets some pretty bad lines, but you can see him burrowing directly through all the movie's meshugas, aiming for the center of Fuqua's intent.

That intent is clear enough, and by itself it's admirable: One of Fuqua's points is that Americans can't distance themselves from atrocities that happen in the rest of the world. (He also made the decision to cast only African actors in the African roles, and he makes an at least halfhearted effort to shape one of those 28 mission refugees into a distinct character.)

But somewhere along the way -- long before one of the movie's late scenes, in which a couple of fighter jets rush to the rescue with a mighty roar worthy of "Top Gun" -- Fuqua lost sight of the difference between keeping people glued to their seats and genuinely opening their eyes. "Tears of the Sun" is a weird blend of politically aware filmmaking and Hollywood hucksterism. If you're going to take on the suffering of the world's people as your subject, at least give them art. The last thing they need is infotainment.