With James Spader as a cool, collected Daniel Ellsberg, FX's "The Pentagon Papers" paints a chillingly familiar picture of an administration fixated on military action in the face of serious risks. 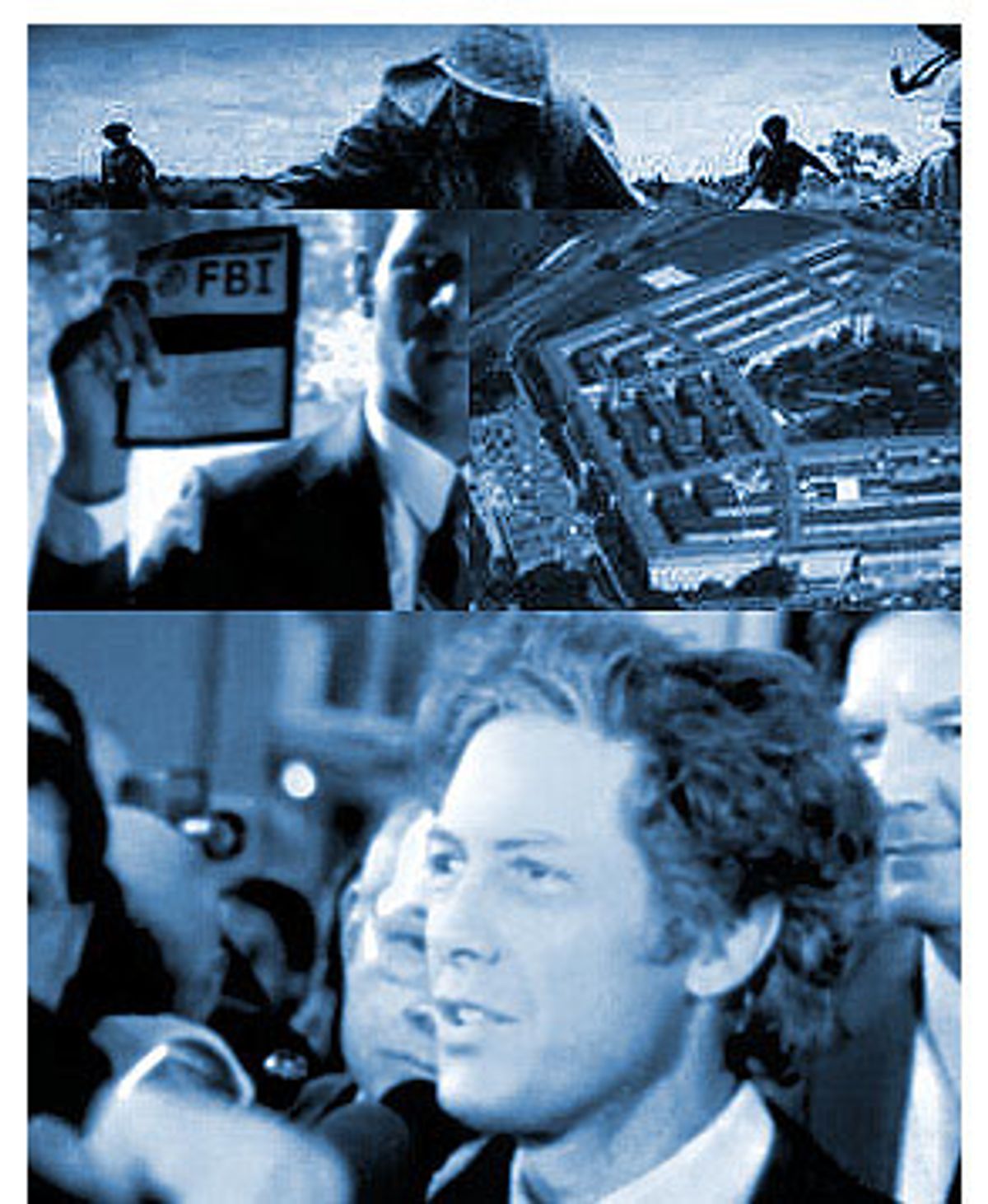 "The threat to the free nations of southeast Asia has long been clear ... In recent months, the actions of the North Vietnamese regime have become steadily more threatening."

"It's naive and even irresponsible for a grown-up today to get her or his information about foreign policy and war and peace exclusively from the administration in power."

With our country at the brink of war, Daniel Ellsberg's words feel more relevant than ever. Of course, most of us are quick to count ourselves among the responsible grown-ups, those smart enough to take the administration's biases into account before believing its message. Still, the shock of a sneak attack like 9/11 has the power to mess with our psychological bearings as a nation. We'd like to believe that the administration has privileged, damning information about the Iraqi regime, because we'd prefer to believe that there's some way of predicting and preventing future terrorist attacks. Otherwise, the insecurity we face on a daily basis becomes almost intolerable.

But, as the made-for-TV film "The Pentagon Papers" demonstrates, carefully evaluating information our leaders give us isn't a cynical or skeptical act. ("The Pentagon Papers" premiered Sunday night on FX and will be repeated several times; check your local listings.) Historically, American leaders have engaged in military action even when presented with firm evidence that they have little to gain and thousands of lives to lose. Ellsberg's experiences drive home the fact that we have a responsibility, as citizens, to meticulously analyze the information we're given, and to unflinchingly confront the possibility of deception by our leaders.

The film follows Ellsberg's life from his initial work for the Rand Corp. through his career at the Pentagon, where he watched decision-makers lead the country into a deepening involvement in Southeast Asia, to his two years of service in Vietnam. That was followed, of course, by his eventual decision to copy 7,000 pages of secret documents that became known as the Pentagon Papers and leak them to the New York Times, which made history by publishing them, beginning in June 1971. Considering the challenges involved in depicting the Vietnam conflict in a fresh way while dramatizing Ellsberg's courageous act -- which mostly consisted of an extended tango with a tireless Xerox machine -- it's impressive that the filmmakers manage to portray Ellsberg's transformation from hawkish wonk to outspoken peace activist and whistle-blower so stylishly and convincingly.

James Spader not only looks a lot like the young Ellsberg, but he plays the focused, detail-oriented researcher with impressive intensity. As Ellsberg faces down the horrors of Vietnam, or refuses to cave in to his superiors at Rand, Spader portrays Ellsberg's quiet determination and smoldering resolve to do the right thing, no matter what the pressures or circumstances. Given the high stakes of these scenes, Spader might have surrendered to the temptation to overact or emote melodramatically. But instead of depicting Ellsberg as a valiant, breast-beating hero, Spader takes the risk of presenting him as low-key, pensive and reserved, almost to the point of being unlikable. As a result, Ellsberg feels like a real, knowable human being. When he begins to open up to the new influences and ideas that eventually lead him to do his part to stop the war, the viewer experiences his transformation more intimately.

Thanks to the subtlety with which Spader handles his role, a little goes a long way. In what at first appears to be just another peace rally scene, featuring a diverse gaggle of groovy-looking long-haired hippies clapping and yelling, "Right on!" Ellsberg listens as a square-looking, baby-faced teenager, Randy Kehler, earnestly announces his intention to resist the draft. He's not moving to Canada or seeking conscientious objector status, but rather allowing himself to be arrested.

"I feel that the best way, the only way I can serve my country is to sacrifice myself," says Kehler. "When the day comes that I'm released from prison, I'll wear a permanent mark. Never will I be a CEO, never will I serve in office and never again will I be trusted by many. But I'm willing to surrender these things. That permanent mark fixed upon me? I will wear it with pride." By the end of this speech, Kehler and Ellsberg might as well be the only ones in the room, the parallel close-up shots of their faces reflecting their link.

Ellsberg wrote in a reminiscence for Modern Maturity magazine that when he heard Kehler speak, "It was as if an ax split my head, and my heart broke open." Spader registers Ellsberg's shock and emotion with touching subtlety, yet immediately we recognize that Ellsberg will soon turn the corner from passivity to deliberate action. We've all seen countless paint-by-numbers depictions of anti-Vietnam peace rallies, most of them so tired that the extras might as well be wearing prefabricated "Vietnam Protester" Halloween costumes; this scene feels fresh and devastatingly personal.

Although "The Pentagon Papers" tackles a lot of fairly dry material with dynamic, creative directing, the filmmakers haven't completely abandoned certain cheesy TV-movie formulas. Claire Forlani, best known for her role as the supernaturally attractive love interest in "Meet Joe Black," plays Ellsberg's supernaturally attractive love interest and eventual wife, Patricia Marx. Marx was a real looker, but Forlani is almost distractingly pretty -- particularly when she's traipsing around in a slip, which she seems to do in an unnatural number of scenes.

Although Forlani's role at first seems limited to a debutante-dove variation on the "Stop all that internationally crucial work and come to bed, honey" theme, when Marx becomes involved with Ellsberg's struggles, her sharp perspectives on the war and her impact on his decisions give Forlani richer material to work with. Her interactions with Spader feel organic and believable, and she has a way of biting her lip and holding back tears that's particularly moving. Still, when she lights a fresh cigarette and hunkers down to read the Pentagon Papers in a man's work shirt and nothing else, the effect is more Victoria's Secret ad than historically weighty moment. Such absurdly sexed-up material not only feels out of place in the story, it undercuts the filmmakers' gains in making Ellsberg feel life-size and familiar to the viewer.

And how much of Ellsberg's story will the average young viewer understand, assuming he or she is unfamiliar with the history of the Pentagon Papers? The damage of overplaying the love story is that it predisposes such viewers to experience this as an exaggerated, fictionalized work. All these situations have been presented before, from ambushed soldiers and slaughtered villagers in Vietnam to the determined renegade fighting against a corrupt system, yet the film is intricately crafted and dynamic enough to chart its own course through familiar terrain. While director Rod Holcomb's creative filmmaking -- a blend of black-and-white scenes, hand-held shots, oversaturated '60s-style footage and genuine news footage of Walter Cronkite reporting on Ellsberg's story -- encourages the viewer to encounter the material as a palpable moment in history, the occasional reliance on goofy TV-movie formulas works against it.

Though some of the dialogue (written by Jason Horwitch) hits a high pitch of self-righteousness, such feverish prose is necessary to accurately reflect Ellsberg's struggle with taking personal responsibility in the face of overwhelming risks. "I may be remembered as a traitor," Ellsberg worries before his trial, but he remains determined to proceed. The film closes with historical footage that packs an undeniable emotional punch -- first a brief clip of the real-life Ellsberg, followed by Dan Rather narrating footage of the evacuation from Saigon at the end of the war, featuring unforgettable images of military helicopters falling into the ocean.

Ultimately, "The Pentagon Papers" (whose cast also includes such established Hollywood actors as Alan Arkin and Paul Giamatti) succeeds in making Ellsberg's internal battles and his eventual call to action feel both palpable and personal. At a time when our leaders arrogantly insist that the outcry against war has no impact on their policy decisions, when the word "treason" is once against bandied about recklessly in reference to everything from free speech to "Give Peace a Chance" T-shirts, Ellsberg's story serves as an important reminder that it is our personal responsibility as citizens to question, to seek thorough information and to root out deception.