Going once, going twice, gone! Estonia's gene pool has been sold to the bidder in the front row. 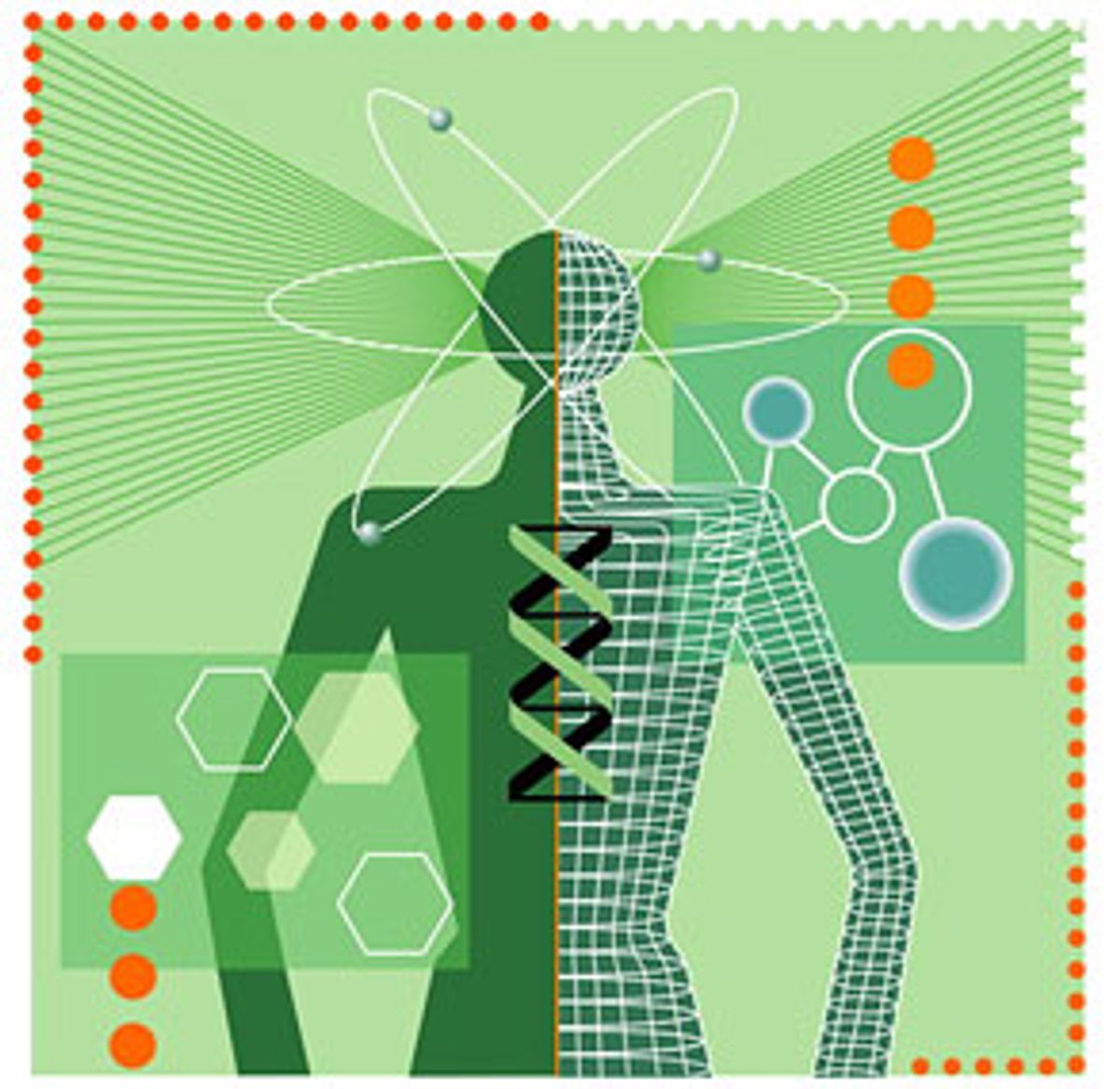 In the next edition, the American spooks should update their list ... with an entry for human DNA.

The newest resources "discovered" in Estonia are the genes of its 1.4 million citizens. The country's government and a Silicon Valley start-up called EGeen International are treating the Estonian gene pool as a commodity to be exploited for medical research and profit.

EGeen owns the exclusive commercial rights to data from the Estonian Gene Bank Project. In March the bank will begin a full-scale effort to collect blood samples and medical histories that will help scientists understand Estonians from the inside out.

In a pilot effort, the project has already collected 1,000 such samples and histories from the three counties of Tartu, West Viru and Saare. Now, the goal is to persuade the rest of country's inhabitants that it's in the best interests of them, their descendants and their countrymen to be decoded for science.

"About 10 percent have said: 'No way!' They're not going to participate," says Kalev Kask, the CEO of EGeen International, which is based in Redwood City, Calif. "About 30 percent are uncertain or need more information, and the rest are positive. About 30 percent are firm believers."

With the human genome mapped, DNA information potentially has enormous value to medicine. National efforts to capitalize on that demand, by taking a kind of genetic census, are underway in several countries, including Iceland and Britain. Geneticists and drug companies will use the data in an effort to determine the genetic makeup of everything from high blood pressure to anxiety. The ultimate goal: tailoring drugs and treatments to your personal genetic profile.

Estonia is a test case for understanding how turning the genetic stock of a poor country into a marketable commodity is fraught with social and ethical challenges. To pick just one brave new possibility: Will "bad genes" join gender, race and class as a potential source of discrimination? Estonia has even enacted legislation to address gene policy problems before they happen. As it pushes forward in data-mining its own citizens' DNA, the country is asking: What rights do people have over their own genes?

"We know that there are all sorts of things that are strongly correlated with genetics, but it's not single genes, it's complex," says Gregory Stock, director of the UCLA Program on Medicine and author of "Redesigning Humans: Our Inevitable Genetic Future."

Teasing out those relationships requires masses of data, and providing that data has proven to be the incentive leading this first wave of countries into the genetic marketplace.

In the rush for biotech global domination a history of political occupation and subjugation can actually be a marketing differentiator. Estonia won its independence from its latest round of conquerors in 1991, when the Soviet Union collapsed. But the country has a long history of being overrun and plundered by others, including the Danes, the Swedes, the Germans, the Poles and the Russians.

"It has had a pretty tough history," says Kask. "It's been invaded over and over throughout the past thousands of years, so a typical Estonian is sort of representative of all Europeans."

Iceland, for its part, boasts about the homogeneity of the DNA of its small population, descended from the Vikings, and its detailed genealogical records, dating back hundreds of years.

Stock sees both countries as "basically trying to market to their strengths."

In a small population -- there are just shy of 280,000 Icelanders -- with a shared genetic history, it may be easier to spot relationships between specific genes and a given disease, but that also means that relationship is less likely to apply to people elsewhere.

"You don't want to waste your time on things that don't have a broad relevance. If you're a drug company, they're not as interesting. But in a more heterogeneous population, it's more expensive to do the genetics," Stock says.

But what about the problem of gathering the information? You can either conscript your citizenry's genes into service in a great, preemptive, patriotic swoop, or you can ask for volunteers for a project that many citizens are not likely to understand.

On the Estonian Gene Bank Project Web site, the FAQ explaining the process to potential donors includes this question: "Will I lose my genes when I become a gene donor?" Answer: "No, certainly not. Genes are in every cell in your body."

Iceland drew heat from bioethicists around the world, as well as from some citizens within its borders, when it announced that it would adopt an "opt-out" policy for its gene bank. Icelanders would be automatically included unless they specifically chose not to be. Bonus: Even thousands of dead Icelanders would have their genes, genealogical history and medical history cross-referenced and analyzed with their countrymen's.

Note to self: If you're already dead, you can't opt out.

Estonia and EGeen International have gone to great lengths to avoid the controversy swirling around Iceland's gene project. For starters, Estonia has adopted an opt-in policy in which participants have to volunteer for the project. But the medical ethicists even have their doubts about that.

"Can you really get the voluntary cooperation of everybody?" says Arthur Caplan, director of the Center for Bioethics at the University of Pennsylvania. "In Estonia, there is so much enthusiasm on the part of government officials about this as a way to obtain scientific prominence and some degree of fiscal remuneration, it might be hard to say no."

While participants in the Estonia project agree to give their medical histories and blood samples to the project for free, the doctors recruiting them do not donate their time. About 20 percent of doctors in the country will be trained to fill out a special health questionnaire for the project, according to EGeen. "Those doctors get compensated for the time they spend with the donor," says Kask, "if such a doctor has a donor who, based on informed consent, agrees to fill in that thorough questionnaire and donate a blood sample to that gene bank."

But with doctors being paid for bringing recruits into the project, that means your physician could be moonlighting as a gene bank salesman.

The actual data is held not by EGeen International, but by a foundation, which receives funding from EGeen. The hope is that this legal separation will help protect the privacy of the participants even as they give up the most intimate information about themselves, while allowing some of the economic benefits from the commercialization of the data to flow back to Estonia.

The country went so far as to enact a law, the Human Genes Research Act, to govern how data is collected, kept and used by the project.

The act promises participants confidentiality through technology: "The personal data of the gene donor shall be separated from genetic data and each blood sample and set of health data shall be given a unique 16-digit code. Deciphering such a code at the present level of technology is unreal."

Among its other key provisions: a gene donor can decide whether or not she wants to know her own genetic information. If medical science discovers that your genes dictate that you have an 85 percent chance of developing breast cancer, perhaps you'd rather remain blissfully ignorant. Participants also have the right to terminate their relationship with the project, and extract their information from the database.

For some critics, linking individual genotypes to medical history raises the specter of genetic discrimination, a crime specifically prohibited by the Human Genes Research Act. Theoretically, one could risk being blackballed for health coverage before you even suffer from a disease, just by having a genetically determined propensity indicating that might one day become ill. Kask argues that's not really an issue in Estonia, where socialized medicine means that everyone is automatically covered, but the lessons learned from Estonian data may one day end up being valuable information for insurance adjusters elsewhere.

Will navigating all these quandaries pay off? It's too early to tell for EGeen, since it's still in the start-up phase, spending its first few million dollars of funding from Draper Fisher Jurvetson ePlanet Ventures, Small Enterprise Assistance Funds and venture capitalist Steve Jurvetson's personal money. Iceland's deCODE Genetics has suffered financially: After some initial excitement around its public offering, when share prices reached close to $30 a share, the stock is now trading below $2.

But whatever happens with these companies financially, the research that they or others like them do will undoubtedly change the way people everywhere think about the code that makes them who they are.