Darryl Worley's hot new country single "Have You Forgotten?" plumbs a new low in post-9/11 pop, arguing that to avenge terror we must attack Iraq. 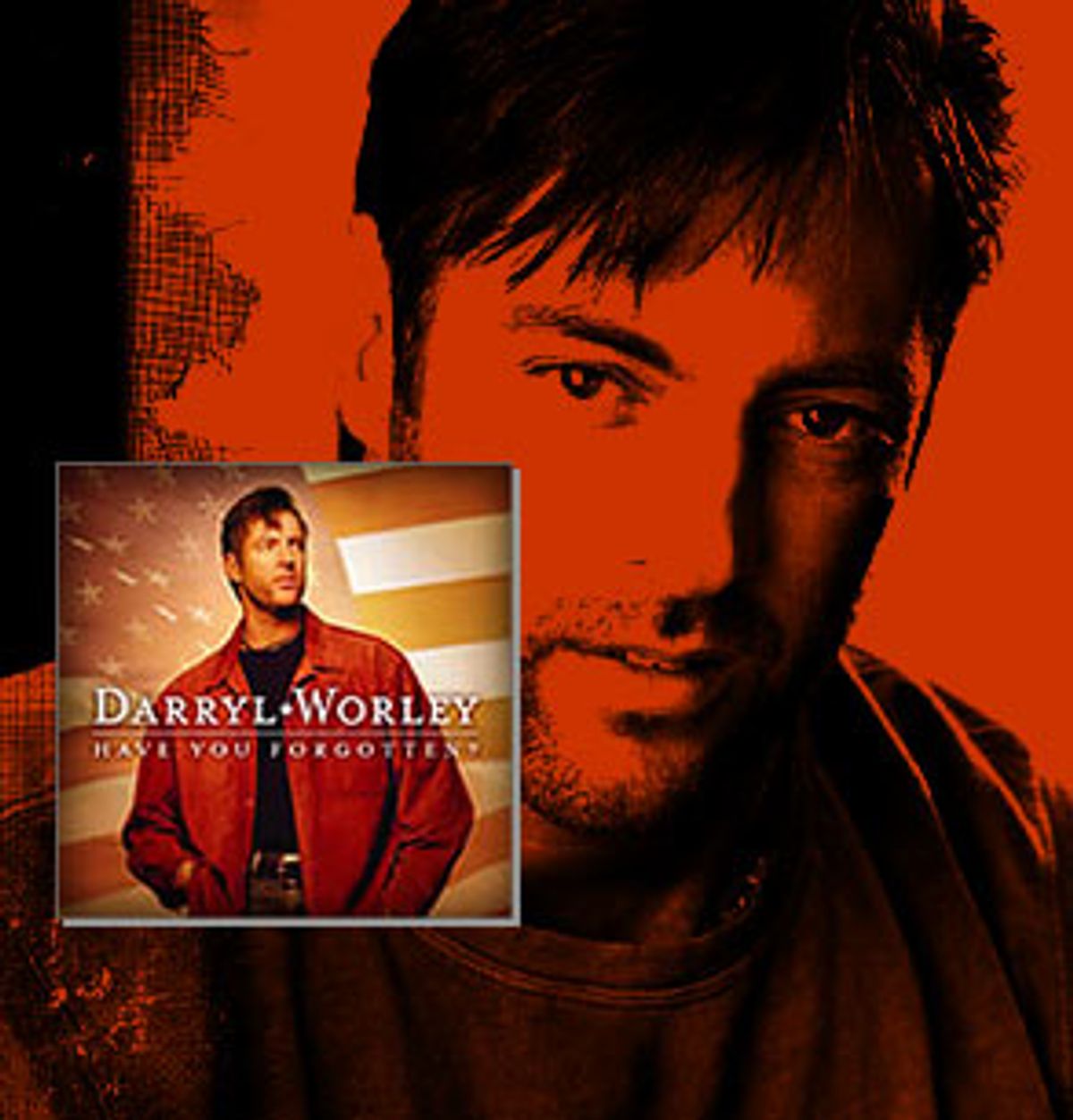 Could the White House have scripted this pop culture moment any better? Just as the president makes the case for war against Iraq based on the disputed premise that only an invasion of Baghdad will protect America from al-Qaida-like terrorist attacks, a new, pro-war country single is racing up the charts. The song's premise? The best way for Americans to avenge the terror of Osama bin Laden is to wage war on Iraq.

The singer is Darryl Worley, a good ol' boy from Hardin County, Tenn. The song is called "Have You Forgotten?" and it's a country radio phenomenon, barreling its way toward a certain No. 1 slot. (Commercially, the song won't be out until Worley's CD is released May 20; a downloadable single should be available this week.)

Key lyrics: "I hear people saying we don't need this war/ I say there's some things worth fighting for/ Some say this country's just out looking for a fight/ After 9/11, man, I'd have to say that's right/ Have you forgotten all the people killed?/ Some went down like heroes in that Pennsylvania field/ Have you forgotten about our Pentagon?/ All the loved ones that we lost and those left to carry on/ Don't you tell me not to worry about bin Laden."

Think of it as pop music for the red states. Or better yet, considering the song's nifty piece of wartime disinformation, maybe "The Ballad of the Gulf of Tonkin."

That's not a slap at patriotic pop songs, or to suggest that topical tunes need to lean left, although the two best post-9/11 songs did, at least arguably. Both Bruce Springsteen's "The Rising" and country superstar Alan Jackson's "Where Were You (When the World Stopped Turning)" opted for introspection, healing and faith, rather than a jingoistic call for vengeance.

Another lunch-bucket country singer, Aaron Tippin, weighed in with more of a feel-good patriotic anthem in the wake of 9/11, "Where the Stars and Stripes and Eagles Fly." Simplistic? Sure. Welcomed during the dark days of October and November 2001? Absolutely.

Worley goes much further than that. He tries to suggest a rationale for the war that even the White House, which has been wrestling with the topic for more than a year, has not been able to successfully articulate.

In interviews, Worley has tried to be cute about the song's real meaning, implying the "war" in "Have You Forgotten?" is the war on terrorism, which the U.S. launched against Afghanistan with almost unanimous support following terrorist attacks on the World Trade Center and Pentagon.

But Worley co-wrote "Forgotten" with Wynn Varble in December 2002, after visiting U.S. troops overseas. Did he really think, with weapons inspectors prowling Iraq and MSNBC's "Countdown Iraq" already a TV staple, that the stridently pro-military song's reference to "this war" wouldn't be interpreted to mean Iraq?

As one country disc jockey told USA Today, "The audience is so wrapped up in the emotion of what it's about, I don't think they're nitpicking at this point" about the difference between Saddam Hussein and Osama bin Laden.

It turns out Worley's fine with that interpretation. "I do support our president," he said on NBC's "Today." "I think he's on the right track, and personally, I agree with what he's doing and I'm OK with that."

In other words, rather than try to clear up any confusion, he's signed off on the song's erroneous premise that if America wants to avenge 9/11 it should rain bombs down on Iraq. As Bill Maher recently noted on his late-night HBO show, that would have been like Franklin D. Roosevelt responding to Pearl Harbor by saying, "OK, Japan attacked us. So let's go after Spain!"

The question of whether Hussein and bin Laden are in fact linked has been a hotly debated one for the past year. War hawks first tried to prove that 9/11 suicide bomber Mohammed Atta had met with a senior Iraqi intelligence officer in Prague, but that story kept unraveling.

More recently, Secretary of State Colin Powell has tried to forge the same links, but with few new specifics. His analysis was greeted with widespread international skepticism.

Still, the White House won't give up. During last week's prime-time press conference, President Bush argued eight separate times that in order to prevent another 9/11, American must attack Iraq. "Saddam Hussein is a threat to our nation. Sept. 11 changed the strategic thinking, at least as far as I was concerned, for how to protect our country. My job is to protect the American people," said Bush.

That kind of drumbeat of dubious rhetoric has had an effect. According to a January poll conducted by Princeton Survey Research Associates, 46 percent of Americans thought most of the Sept. 11 hijackers were Iraqis. (Only 17 percent knew the correct answer: none were from Iraq.) That conspiracy theory seems to be thriving inside the U.S. military as well. A recent news account in the Newark (N.J.) Star-Ledger about U.S. troops deployed in the Gulf region was accompanied by a photograph of a bomb presumably destined for an Iraqi target. On it someone had scribbled: "It's Payback Time."

Payback time for what? Tune into WKSJ in Mobile, Ala., KILT in Houston or WIVK in Knoxville, Tenn., and hear Darryl Worley sing the answer: It's payback time for 9/11, whether Iraq had anything to do with it or not.