A smash hit from England jokes about love, soccer, ethnic food and immigrant assimilation. Wait, haven't we seen this movie before? 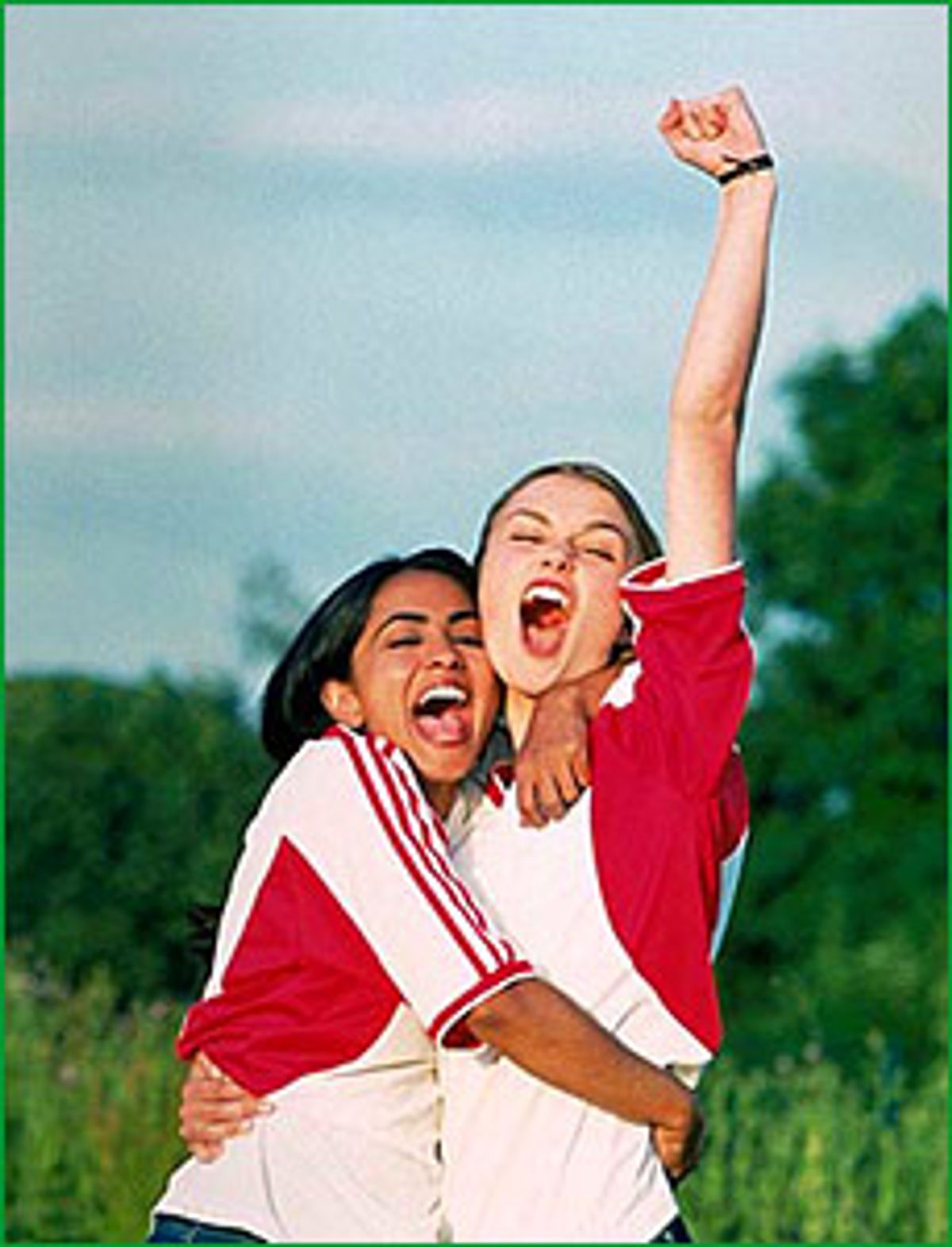 Oh, those slap-happy foreign cultures and their problems assimilating into modern contemporary society! Movies about culture clashes, particularly conflicts involving love and marriage, are perennial favorites, and it's not hard to see why: Aside from the infinite number of jokes to be made about foodstuffs with funny names, we live in a world that's so vast we can barely get a handle on it. How, exactly, do we learn to interconnect and coexist without jostling one another too much?

That's the charitable view. The crankier one demands that we ask whether we really need another movie that ratchets up the differences between cultures to intensify the conflicts (and the supposedly rollicking laughs) that ensue when worlds collide. "Bend It Like Beckham," the third feature film by Gurinder Chadha ("Bhaji on the Beach," "What's Cooking"), was a smash hit in Britain last year and is now making its way to theaters Stateside. (It opens Wednesday in New York and Los Angeles, with other cities to follow.)

Jess Bhamra (the believable and appealing Parminder Nagra) is a London teenager who's more interested in football (i.e., soccer) than in handbags and manicures, much to the dismay of her conservative Indian parents, played by Shaheen Khan and Bollywood superstar Anupam Kher. They're much more pleased with the womanly progress of their other daughter, the girly-girl Pinky (Archie Panjabi), who is engaged to be married to a nice Indian boy. In fact they're so happy with the formal engagement that they fail to notice that for months Pinky has been sneaking off to see, and probably sleep with, her fiancé.

Jess is a good student, but beyond going to school, all she's interested in is football -- her idol is superstar player David Beckham, and she fantasizes about being the female version of him. A fellow athlete named Jules (Keira Knightley) spots Jess kicking the ball around with some boys in a local park and taps her to play on a girls' team that's recently started up in another neighborhood. Jess is a terrific player, and she loves being on the team. She learns that she might be able to get a scholarship, which would allow her to attend school in the U.S. and to play ball. Meanwhile, she develops a close friendship with Jules, and an even closer -- and, in her family's eyes, more dangerous one -- with the young male coach, Joe (the sullen and dull Jonathan Rhys-Meyers).

"Bend It Like Beckham" is a light-spirited movie without a mean bone in its body. Chadha's message is that in the modern world children have to be allowed to forge their own futures. She also knows that while we need to be reasonably understanding of parents and elderly folk who cling to the old ways, we don't need to make excuses for their intolerance. That means that if one of their sons or daughters falls in love with a person of the wrong race or religion -- or, heaven forbid, with a person of the same sex -- they should seek to understand and accept it, rather than withdraw their love.

That message is all very nice. But it doesn't keep "Bend It Like Beckham" from feeling rote and overstated. It's mildly amusing the first time Mrs. Bharma, in her accusatory singsong litany, unfavorably compares Jess with Pinky; by the 20th time, the shtick is as tired and unsalvageable as a week-old pakora. Kher is appealing and warm as the more tolerant Mr. Bharma. The movie makes him much more sympathetic; he merely hopes to shield Jess from disappointment of the sort he felt when, upon moving to England, he was barred from playing cricket because he was an immigrant. Even so, the constant jabbering of Mr. and Mrs. Bharma's family and friends, while possibly very realistic, begins to feel forced and repetitious -- it seems to exist solely to reinforce the movie's points.

When Pinky's fiancé's parents call off the wedding because they believe they've seen Jess kissing a white boy, they scold Mr. and Mrs. Bharma: "All I know is, the children are a map of their parents." Of course, there are certainly people in the world who feel that way. But you start to wonder how any parents living in 21st century London would actually take such an accusation as seriously as Mr. and Mrs. Bharma do. This is, after all, a culture in which children have been choosing their own mates for quite a few years now. It's one thing to try to preserve the old ways, but it's another to expect your children to accept your decisions wholeheartedly in every instance.

Nagra, as Jess, is a charming actress. She makes you understand how much the madness around her threatens to weigh her down, even as she refuses to stop fighting it. There's no way not to root for her. And the movie contains a few funny bits, like the one in which a cellphone rings at Pinky's engagement party and a gaggle of elderly Indian women in saris fiddle around in their white handbags to whip out their mobiles.

But otherwise, "Bend It Like Beckham" seems to consist of endless scenes in which Jess is punished and forced to sneak out of the house. And there's plenty of stuff about typical teenage embarrassments, as when a seamstress, fitting Jess for a sari, assesses her small breasts and announces loudly that she can "make these mosquito bites look like juicy, juicy mangoes."

Those are the sorts of jokes designed to make all the over-60s out there in movieland giggle gently and congratulate themselves on being so liberal about cultural and generational differences that they can giggle. "Bend It Like Beckham" is supposedly a movie about youth; its biggest shortcoming is that it rarely feels young.