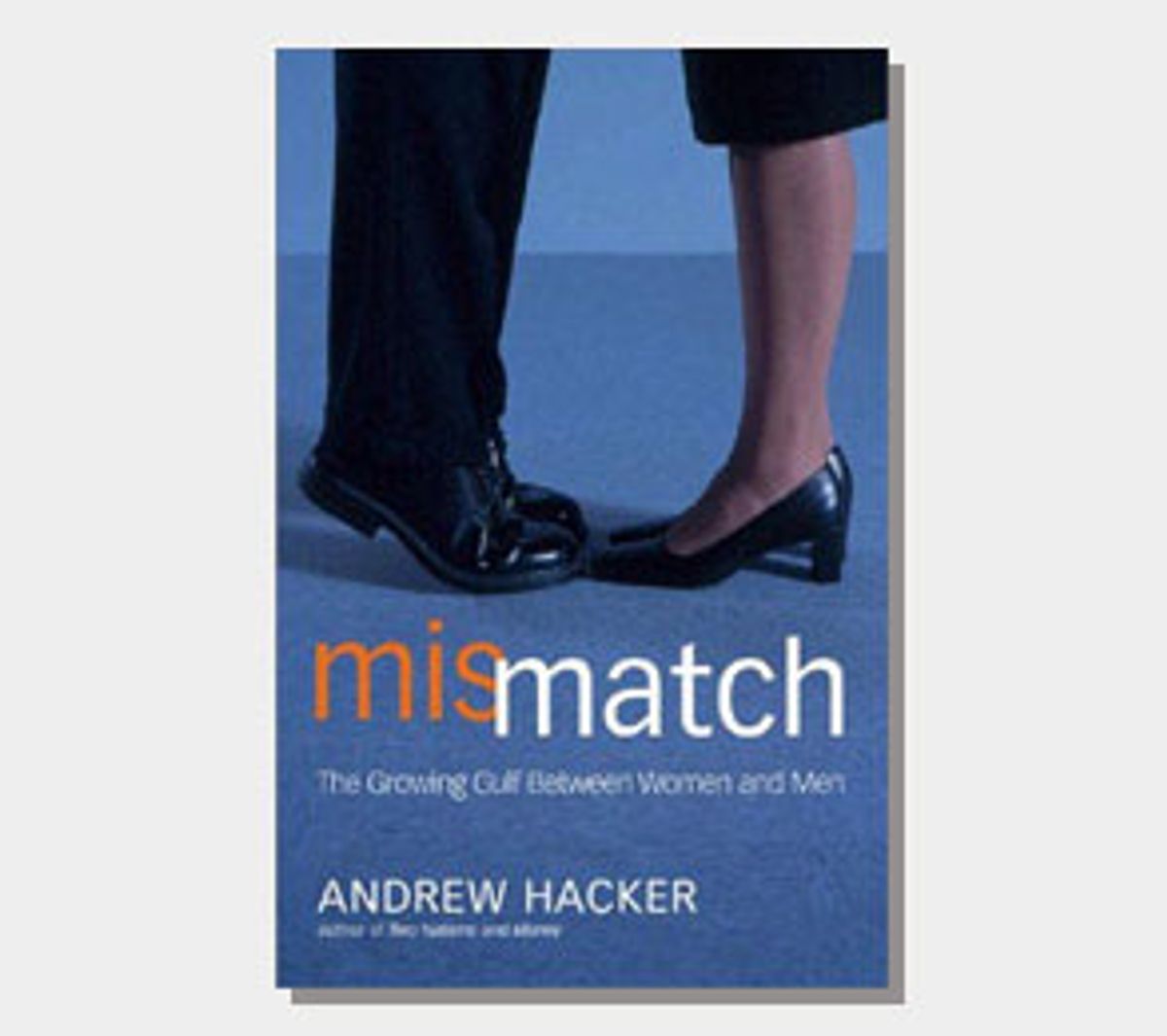 Andrew Hacker's "Mismatch" belongs to a burgeoning new category of books: treatises by members of the older generation calling attention to the sorry state of gender relations among the young. As with Sylvia Ann Hewlett's "Creating a Life: Professional Women and the Quest for Children" and Barbara Dafoe Whitehead's "Why There Are No Good Men Left," you get an hazy impression of 30ish single daughters or nieces somewhere off in the worrisome background. Not that Hacker (who lacks a third name, but to judge from his unfortunate author photo, has more than enough neck to make up for it) would ever digress into his personal knowledge of today's battles of the sexes. He's a numbers man.

Hacker's writerly stock in trade is simple enough: He combs through census reports, government-generated statistics and other figures, scooping up an interesting figure here and a "revealing" factoid there, then amalgamates it all together with a binding agent of innocuous social commentary. Call it intellectual head cheese. This technique served him well in his 1992 book, "Two Nations: Black and White, Separate, Hostile, Unequal," a bestseller.

But while race preoccupies Americans, we're surprisingly ignorant of the raw data about it, and "Two Nations" won attention by opening more than a few eyes. "Mismatch," on the other hand, covers ground so thoroughly scoured and analyzed by commentators -- ranging from young feminist and conservative firebrands to newspaper columnists to three-named, furrow-browed sociologists -- that not much here will surprise you. Still, Hacker's status as a male professor of political science at Queens College in New York and a frequent contributor to the New York Review of Books might just lend the whole tortured issue some gravitas.

"Mismatch" offers the occasional insight and, more frequently, equally fascinating examples of cluelessness, but certainly nothing to earn the mutilating hatchet job it received at the hands of New York Times book critic Michiko Kakutani. She opened her review thus: "Men are selfish pigs. And there aren't enough of them to go around. At least that's what Andrew Hacker says in his depressing new book, 'Mismatch,' a glib, didactic book that uses sometimes dubious methodology to ratify women's worst fears about dating and marriage and the opposite sex."

Um, no, it doesn't, but then that's the problem with this kind of vastly generalizing take on male-female relations -- people see in it what they fear most. It's hard to say why anyone reads such books. The fact that hundreds of thousands of other people might face a personal dilemma similar to your own doesn't make the dilemma itself any less personal. The dismaying trends described by these books either confirm your own experiences, in which case you hardly need a book to tell you it's happening, or they don't, in which case they don't apply except as a vague threat. Either way, it's a bummer, so why subject yourself to their knells of doom? And yet, we do.

Kakutani notwithstanding, what Hacker actually does say in "Mismatch" is that contemporary men and women seem to want increasingly different things from their romantic relationships and that this disparity is making nuclear families increasingly less common. Dissatisfied women initiate most divorces and wind up raising their children on their own with little contribution in time or money from the children's biological fathers. More women are bypassing the effort to find a live-in father for their kids and are going it alone from the very start. They do this even though divorced women suffer a drop in their standard of living (for divorced men, it goes up) and single mothers head the nation's poorest households. Men, by contrast, may give lip service to women's hard-won independence and equality, but according to Hacker, "the reality is that most still hope for a measure of deference that women are no longer willing to give."

Hacker follows this thesis through a meandering assortment of topics, a course apparently determined by the availability of raw data; his motto might be "Where the stats are." When he tries to color outside the lines, the results are peculiar, as if he were the dotty elderly professor in some old Disney movie -- played by Fred MacMurray, perhaps -- wandering into the sock hop and trying to chat with the kids in outdated lingo. He marvels that "oddly, given our ingenuity, no one has devised a scheme for classifying human temperaments or creating terms to describe them," apparently having never noticed the endless shelves of self-help books that do exactly that and, furthermore, have been dealing for decades with exactly the same agonies his own book describes.

Of course, Hacker notes, there is astrology, an exotic philosophy based on the idea that "our personalities were formed by conjunctions of the planets while we were in the womb," in case you hadn't heard. According to Hacker, it sometimes -- what do you know! -- plays a role in courtship. "'What's your sign?' a man asks on meeting a potential mate, hoping to ascertain their compatibility," he writes. For crying out loud, even back in the days when guys still floated this cheesy line, they weren't being sincere.

Plus, Hacker doesn't know his territory, particularly the history of marriage and family life, so his grasp on how heterosexual relationships used to work in "earlier eras" is lamentably shallow. By his account, it began with customs founded back in the misty reaches of time, "the ritual of fraternity pinning" that "was taken as a prelude to marriage" and ended with a husband who would "arrive home pleading exhaustion" to his housebound wife. "If he asked about her day, his questions were usually perfunctory."

Actually, for most of human history most families functioned as economic units, people lived where they worked, usually on farms, and women made a crucial contribution to their families' livelihood, so the progress of "her day" was always a matter of vital concern, if not respect. Hacker seems barely aware of this, blinkered as he is by the mid-20th century Western bourgeois marriage model he grew up with -- a romantic ideal contrived to conceal the institution's economic underpinnings. Marriage has always involved a complex exchange of labor, sex and money, and women usually entered into the deal at a disadvantage. It wasn't always nice work, but it was the only kind they could get.

As a result, Hacker is sure that today's marital woes arise because women suddenly "want more from marriage" -- fuzzy, unquantifiable, emotional things they never insisted on before. A different diagnosis might argue that as soon as women got a shot at financial self-sufficiency, many of them voted with their feet and left marriages that, as they realized once the pink clouds of romance had cleared, turned out to be pretty crummy bargains. They always wanted "more" -- having been promised as much by thousands of movies, novels and pop songs -- but until now they had to settle for a "good provider" since they couldn't provide for themselves. But then that's the rub with this kind of analysis: The numbers may be relatively solid, but our interpretations of them can be all over the map.

Another example: Because men are more easily contented with marriages that offer them little more than regular sex and a cozy nest, while women often find fault with mates who can't offer a deeper level of intimacy, Hacker decides that "in most marriages he loves her less than she does him, largely because loving itself commands less of his life." By this tortuous logic, the spouse who demands a divorce loves more than one who would rather stay married.

And another: Despite his own fairly dim view of what marriage has to offer women, Hacker assumes that those who don't marry young, or who divorce and then don't remarry, are seeking husbands but can't find them. For women, higher income and career success, he notes, correlate with a lesser likelihood of marrying. But what, exactly, is decreased by a woman's economic independence: her ability to marry or her desire to? Most women say they'd like to be married; that hasn't changed. But take away the old financial imperative -- marry or starve -- and what does change is how badly they want to be married.

Most of "Mismatch" tells you things you already know using statistics you've already seen, in fusty and often awkward prose. Hacker does, however, make a convincing case when he zeroes in on education. In 2000, women earned the majority of bachelor's degrees, 57.2 percent of them, and in many colleges female students outnumber the males. "Insofar as education is a route to upward mobility," Hacker writes, "more women than men are taking advantage of this upward track." Though he acknowledges that the glass ceiling exists at the highest echelons of business, he envisions a time when white women will outnumber their male counterparts in many professions, as black women do now.

Hacker has the sense to understand just how revolutionary these changes are, even if he can't express that realization gracefully; a society with a large class of economically and socially independent women, he writes, has literally "no parallel in human times." This has never existed before. Ever. And that seems far more noteworthy than the fact that contemporary men and women are having a hard time negotiating their relationships during this time of momentous transformation.

You can't blame women for insisting on change now that they've finally got the leverage to do so, and you also can't blame men for clinging to a system designed to cater to them; only a fool or a saint willingly surrenders power and privilege. Look at it this way, and it's not surprising that contemporary men and women often find themselves at odds. It's remarkable, actually, that the battle of the sexes hasn't become a knock-down, drag-out war.