Andrew Hacker talks about his new book "Mismatch" and why women are so fed up with the opposite sex. 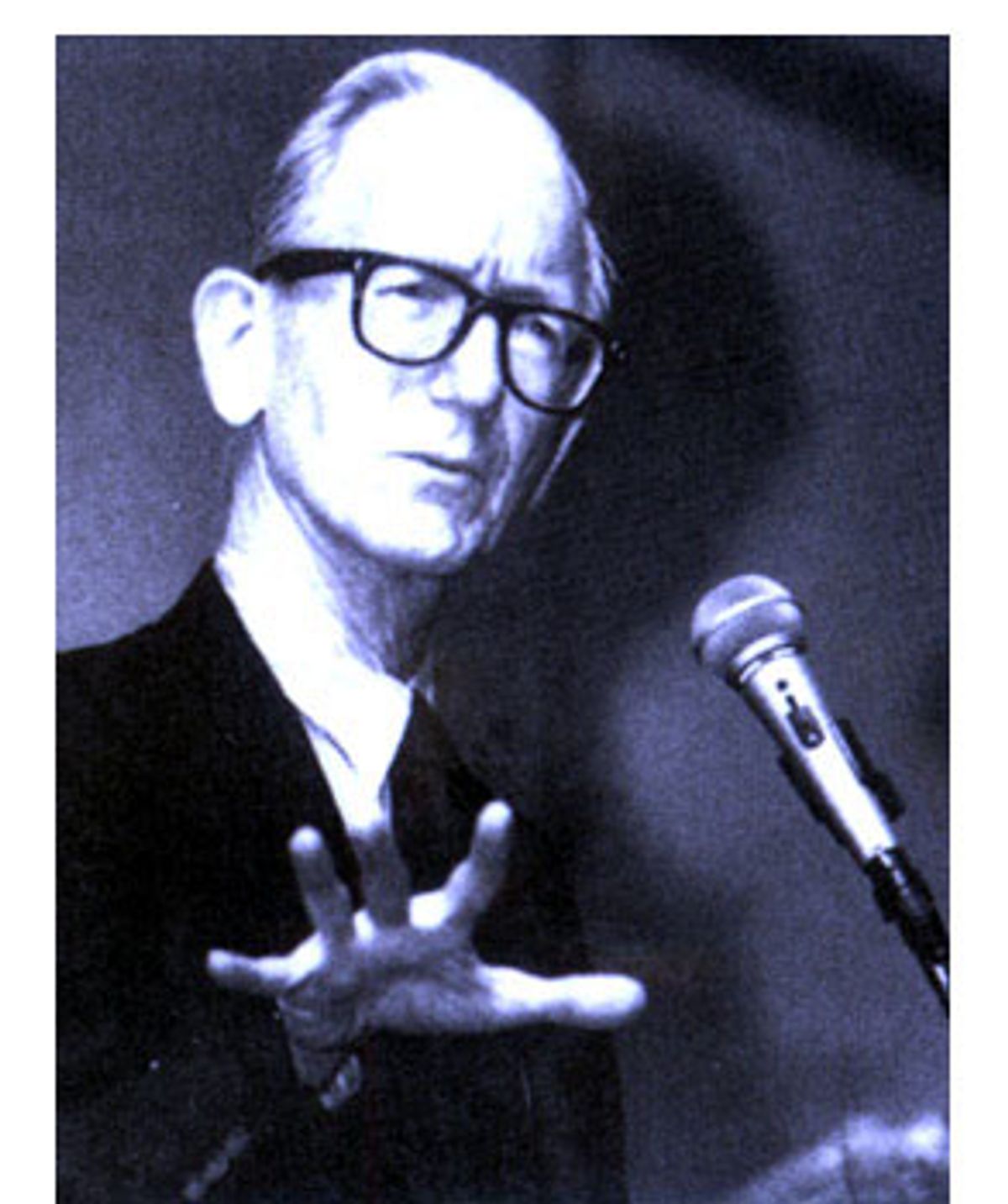 Andrew Hacker has tackled some of America's toughest issues. He analyzed the unbalanced distribution of wealth in "Money: Who Has It and Why" and explored the massive schism between blacks and whites in "Two Nations: Black and White, Separate, Hostile, and Unequal." In his new book, "Mismatch: The Growing Gulf Between Women and Men," Hacker takes on yet another thorny topic: the gender wars.

Men, take cover. "Mismatch" is loaded with numbers, most of which back up Hacker's rather disconcerting analysis of the gap between women's expectations of men and what men actually have to offer them. According to Hacker's research, women seem to have left men far behind: They are better educated, more successful at work, and far more interested in building an equal romantic partnership.

Hacker, a professor of political science at Queens College in New York, spoke with Salon about the politics of golf, why women are more likely to file for divorce, and why men won't watch "Masterpiece Theatre."

Why did you write a book about men, women and relationships?

Well, I had already dealt with race, which is central to American life, and then I looked at wealth and the distinction between the haves and the have-nots. Now I'm tackling the other big division in American life, which is between women and men. Women are now moving ahead in ways that were never anticipated in terms of position, power, income. And this is a challenge in our society because men are not ready for it. I thought this was a topic worth investigating.

My book on race was called "Two Nations." I argued that blacks and whites essentially live apart from each other. Men and women do not live apart from each other -- they share the same homes, the same beds. They are -- and I'm sure this phrase has been used elsewhere -- "intimate enemies." In the past, marriage was based on the fact that the husband was No. 1 and the wife was No. 2, and her job was to support him psychologically and emotionally. She was supposed to cheer his accomplishments, commiserate when he had setbacks, console him when he had failures. Today, women are not willing to do that.

I was married for 43 blissful years. My wife passed away five years ago. And my daughter has been married for 13 years, which I think is a good sign. But we were watching friends and acquaintances getting divorced over the years. They were my "data" in many ways. How it happened, who initiated it, what the consequences were, all of it.

Women are less likely to remarry after divorce, but do you think that this makes them unhappy?

Well, I would only say this: There's a double standard. A man who is 50 has more options than a woman of the same age. When there is a split, he can choose someone in her 20s, 30s, 40s. And women just don't have that choice. In the book I call it "differential depreciation" -- the double standard which posits that women will depreciate at a faster rate than men. Women who are older are perceived as being of less worth. How to change this? I wish I knew.

How old are you?

Oh, let's just say I'm over 65. But I still bike to work at Queens College every day!

It has been suggested that marriage is an antiquated institution, based on an economic relationship that is no longer relevant. Is it possible that society is outgrowing marriage?

But let's say definitions of manhood are changing. Let's say I think of a man as someone who is dependable and solid, a partner, someone who listens. Aren't these things that men are perfectly capable of giving, even if the economic balance is shifting?

If I may say so, you are feminizing a man by wanting him to listen or participate in intimate conversation. Honestly, you're more likely to get what you're looking for from your girlfriends than from a man. You might even get it from a gay guy who is very adept at listening to women. But most men don't listen to women, even in the 2003.

I did a little experiment once. I got a group of men -- young guys with girlfriends -- and a group of girls who had boyfriends, and paid them 20 dollars to sit in a room for an hour or two. I had the guys write down everything they knew about their girlfriends, and the girls write down everything they knew about their boyfriends. The girls sat there for two hours, filling up whole exam books. The guys? After 20 minutes they had nothing more to say. They could barely fill up a page.

So you think women have unrealistic expectations of what men can offer them in a partnership?

Yes. In earlier days, women didn't expect that much. Your mother and grandmother said, 'Find a good provider who brings home a paycheck and cares about the children.' He wasn't a romantic partner; he wasn't an intellectual partner. But today women want much more.

And if women wish to be treated as equals -- for example, wanting to talk to men -- that may be interpreted as an attempt to feminize men?

That's a fascinating way to put it. How's this for an example: Let's say a man and a woman are watching TV, and "Masterpiece Theatre" is showing an adaptation of Henry James' "The Golden Bowl." Let's say the woman would really love the man to watch it with her and then discuss it with her afterward. She'd like the man to do that with her; she really would. But she's not going to get it, though.

It's not just about "Masterpiece Theatre," though. Women can discuss lots of things -- even sports!

Well, that's marvelous, it really is. But that goes into a whole other thing. Women are rising up in the corporate world. And a big part of that world is golf. Even if a woman becomes quite good at golf, the men won't want her in their foursome.

And why is that?

Well, this is rather primal, and it goes way back to the boys' clubhouse. I admire women who have made it up to the CEO level -- at Hewlett-Packard, at Xerox, at Lucent -- without playing golf. But it's harder, especially because a lot of the golf game is also about hanging out in the locker room. And I'm sorry, women are just not going to get into that world. It's a man's club.

So wait, if a woman wants the man to meet her on her ground, in this case watching "The Golden Bowl," then she's feminizing the man. But if she wants to participate in the activities we normally associate with men, say golf or discussions of politics or sports, then she's not welcome? Isn't that something of a lose-lose situation?

Well, take sports. Guys have been talking about sports since age 10, and sure, you can be interested in sports and know things about this team and those players and so on. But it doesn't have the same resonance, because you started so late. And so what men are really thinking is "OK, come on, you're not a part of this game."

This does not mean you can't get ahead. Women have credentials; they go to college and graduate school. And fewer and fewer men have the qualifications for these top jobs than ever before.

But men still retain the vast majority of the power in business, in government. They still run the show. But you suggest that there is resentment building up. How does that resentment manifest itself?

It manifests itself in a number of rather subtle ways. For example, I would say that our current presidency is really a man's presidency. Men have to circle the wagons, hold their position. The Bush administration has no problem finding conservative women -- both in the Department of Labor and the Department of Agriculture. These are women who are really anti-feminist. The Bush administration doesn't seem to care much about the votes they might get if they paid attention to women's issues.

Of all the statistics that you discovered in the course of doing the research for this book, which was the most surprising to you?

Of all the bachelor's degrees awarded last year, 57 percent went to women, which means that this incredibly important American credential goes to only 75 men for every 100 women. For this generation coming up, women are going to find fewer men with the same academic credentials they have. A college degree is not just an academic credential but a social credential. Are women going to marry down? We'll see what happens.

What, exactly, do you think that women want?

Aaah. Well, they want a full life, they want to be able to expand themselves, they want to discover their potentialities, which is fine and great. I've been teaching for years, and I'm impressed with my female students who are developing their capacities and all the rest. This is marvelous, but the question is, If they do this, will they be able to find a man who can live with them, given what they want in life? The answer to that question is becoming more uncertain.

So let's take me as an example. I am 32 years old, college educated, reasonably successful. What are my odds, exactly?

Well, I would of course never deign to speak for you personally. But a Miss X, with your characteristics, might statistically encounter some speed bumps. An increasing number of single men are gay -- some of the more interesting and charming ones even, the ones who will be glad to watch "The Golden Bowl" with a woman. There are still many straight single men of Miss X's age, but given her new, higher expectations, she might find these men a bit callow. I hope that word is still being used. I love that word.

Anyway, statistically, Miss X may end up being the second wife of an accomplished man who is a few years older than she, perhaps eight, nine, 10 years older. He will probably have children by his previous marriage, perhaps a bitter ex-wife. He will probably have some kind of career affinity with Miss X. He will be far more practiced at making women feel that he is taking them seriously.

And is he taking her more seriously, or is he just more practiced at making them feel this way?

I won't say "no comment," but what do you think?