"There are no bad deeds, just deeds" 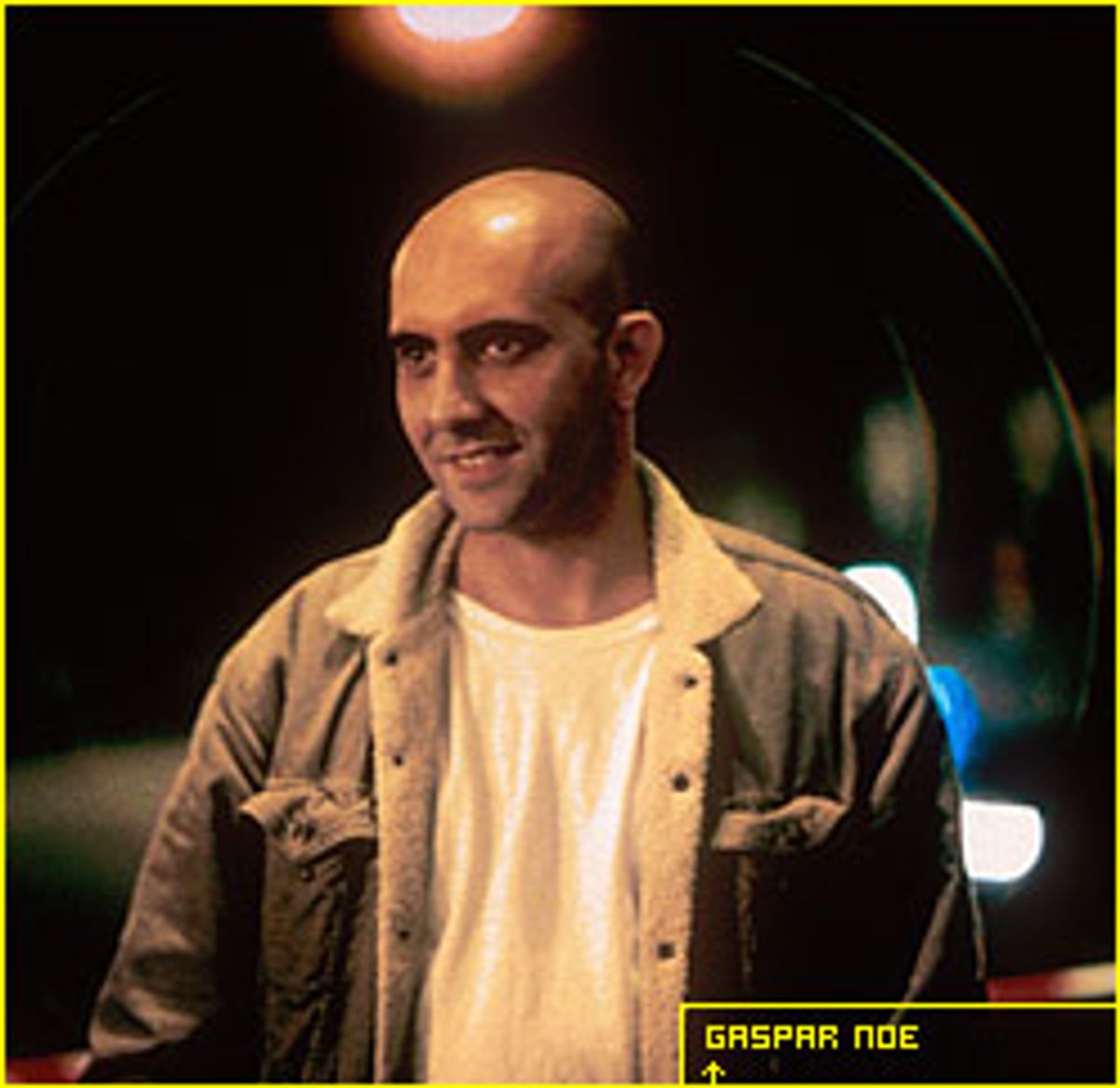 But to look at the picture as such would be to miss a crucial point. Noé's jolting violence and shaky camera work is not for everyone -- just those who can stick around for the moral. The story is told painstakingly in reverse, and there is a wistful irony to the idea that time -- and acts we all live to regret -- is just what the title says.

Noé spoke with Salon by phone from his hotel room at New York's Soho Grand. Readers who haven't seen the film may want to see it before reading this plot-revealing interview.

Let's get this squared away first: Why did the rape scene have to last nine minutes?

That is simply as long as it might last in real life. Sometimes you hear stories of someone being raped for half an hour. It seemed the normal timing for the situation. I could have decided not to show the whole thing and panned the camera in and skipped parts.

But you didn't, and you are being vilified for it. Did you speak to many rape victims in advance of shooting?

Many of the girls I dated had been raped, but people don't like talking about it. When I ask a woman if she has been raped, she'll often say "yes," even, in some cases, "twice." When you ask questions, you feel like it's not your business. I guess you just guess what it would be like. Anti-rape associations have expressed appreciation for the movie.

Are you talking about date rapes? Or rapes by strangers, ambushes?

I know a lot of people who had been raped violently in the streets. It can be a 50-year-old woman who told you it happened 25 years ago. A member of the crew had been raped, too. I can't say who she is.

It happens often in real life. It's rarely portrayed in movies because it's a much closer [more intimate] crime in everyday life than murder.

People don't want to get involved. I was taught to yell "fire" instead of "rape" if it ever happened to me.

Yes, I've heard of that before. [In the movie] there is the guy who witnesses the rape, then leaves. People ask me, "Who was that guy?" It's just anyone. It happens all the time. Witnesses get scared and run away.

There was a moment after the rape and before the beating when Monica's character could have run away.

No, I don't think so. I think he would have run after her.

Of course, the rapist is Jo Prestia, the professional boxer from France.

He used to be the world champion Thai kickboxer. He's very, very famous in France. Some people would come to the set and would be more impressed with his presence than the actors.

What did he do to prepare for the rape scene?

None of us rehearsed anything aside from the kicking of [Monica's] head in [the rape] scene, and the [revenge] scene [with the] fire extinguisher. And we didn't rehearse the whole scenes, just those parts. We had to do tests before to make sure the actors would not be really hit. For the rest, we just went on the set and shot them six times over three days.

What order did you use for the shoot?

We shot the story chronologically.

Of course, there was no script, right? What was the reason for that?

It was more convenient to change scenes on the way. And it helped the actors get into the scenes.

We came up with the idea [for the story] quickly. I'd wanted to do a movie with Vincent and Monica, and we only had six weeks before Monica went to Australia to shoot "Matrix 2." The whole shoot lasted five and a half weeks.

Were you inspired by "Memento" to play the story backward?

Yes, of course. But many novels are told backward. There's one where a woman seems very nice, then you discover she is a bitch, and has been cheating on her boyfriend all along. And there are Tarantino's films. And Kurosawa.

When people play with time you can see stuff differently. I get tired of chronological films. It makes this movie much more tragic because you cannot escape from destiny. People can always intervene and change the path of things. Here, things are inevitable. And Monica's character talks about the book, about predestination.

How did you simulate the rape scene?

One aspect of the digital editing makes it seem realistic -- his penis is added after the shoot. His fly was actually zipped in the scene. It makes the whole thing much more realistic. With his penis visible, Monica loved it. But you don't expect that, and that particular detail makes the thing more dramatic.

Do you really believe, as the first line says, that "time destroys all things?"

It's very dramatic and it sounds good. There are two translations, and the original sentence in French is "time devours all things." It's a well-known Latin sentence, and I almost used that sentence, but it might have been too intellectual. I do believe it. Everything that happens is born inside time -- so you can also put it the other way around.

But the counterpoint to that is the really nonjudgmental comment that follows: "There are no bad deeds, just deeds." Can you comment?

The guy talking is a good friend of mine, very bright. He changed his language for each take. That statement was his personal opinion, although I happen to agree.

The very first scene -- the prologue -- is of the character of the butcher in your 1998 movie "I Stand Alone." Will you use the last scene here -- the one of the girl in the park -- in the first scene of your next movie?

[Noé laughs.] Or maybe I'll use a strobe light.

How do you expect gay groups in America will respond?

In France they love the movie. Gay people thought Vincent Cassel was so gorgeous and so sexy. There will always be people saying it's homophobic. But the reaction of the gay community was better than the straight community. People most offended are really heterosexual men. Male dominants have problems identifying with a woman who's raped.

Men can get raped, too.

The fear disappears with men when you are 18 or 20. I wanted this movie to bring back men's old fear to show them how it is to be raped. Remember, Vincent's character almost gets raped, too.

The movie contains violence not just against a woman, but against gays, transvestites, prostitutes, Asians. Is there no love lost between such groups?

It's funny because you have to be in America to consider people as members of groups. In France people don't use the word "community." Even in France any sense of gay community is diluted. The whole ethnicity thing is much more mixed in France; no one says here you have the Arab community, the Asian community. Anyone can be racist when they get angry for the wrong reasons -- the boyfriend [Cassel's character] was just finding a way to insult his Asian cabdriver. Before shooting that scene, Vincent asked me, "How far should I go?" I said, "You are angry. Say whatever your character would say to make him go faster."

If you start taking care of all the communities in this world, you can never leave your house. Life is made of everything. The actors in my movie are not heroes, they're just human beings.

Would the concepts work as well if the characters weren't so young, beautiful and charmed?

Monica and Vincent -- playing the happy couple -- are the perfect couple for most people. When you see them naked on the bed you think they're so perfect together. It creates a fascination to see their intimacy, but also a jealousy; you know they will pay for being so young, so pretty and so rich. You cannot hate them, because you know their happiness will not last.

How was working with Monica and Vincent as husband and wife?

The whole concept came with the proposal of doing a movie with them. They didn't want to do a comedy. They were really involved. It was not co-directed, but a collective creation. I didn't direct them, I never told them what to say. They were one person. Monica could have stopped the rape scene, but she went all the way through. The apartment scene -- Vincent was nude -- he didn't give a fuck. Having actors like that makes the movie.

They were extremely pleasant to work with. I was not dealing with their egos, I was dealing with friends. They have agents, but they never listen to their agents. Here in America, your actors show up with five lawyers and three agents, polishing images.

You shot 80 percent of the movie yourself. How did you achieve the disorienting camera movement?

By shaking the camera with my hands. The actors were screaming, fighting and running, and I was doing the same thing with the camera. Mostly I was not putting my eye behind the viewer. There was a video screen linked to the camera, and I was watching that -- instead of the lens -- when I shot. I believe that operators wouldn't propose such things to the director. If you direct yourself, you have more fun with the camera. Sometimes when directors frame their own movies, they make it look more weird.

How did you distort the music in the scene that takes place in the gay nightclub?

Thomas Bangalter (of Daft Punk) and I made it as if there were two different tracks playing at two different levels, which often happens in a club. Then we added 27 Hz of infrasound -- a low frequency sound which the police use to stop riots. You can't hear it, but it makes you shake. In a good theater with a subwoofer, you may be more scared by the sound than by what's happening on the screen. A lot of people can take the images but not the sound. Those reactions are physical.

On a lighter note, who came up with the idea of a dress that makes Monica B look like her nipples are constantly erect?

We were looking for the sexiest dress we could find for her. The best, most beautiful party dress we could find that would be something you could really wear in Paris. She had her own green silk dress, and then this guy from Yves Saint Laurent came in and redesigned the whole thing (replicated). We needed 10 copies of that dress, because during the rape scene, after each take, it would be destroyed by blood, etc. It was designed right on her breast. It fits her perfectly.

When you watch your own movie, can you understand why people walk out?

When I see [the two violent] scenes, I see only special effects. But the ending gets me -- I cannot see the kids [on the grass in the park]. I walk out one minute before the end because I feel like I'm going to cry. And it's not because of the [scene], but because of the music, Beethoven's "Symphony No. 7."