Silence of the Dems 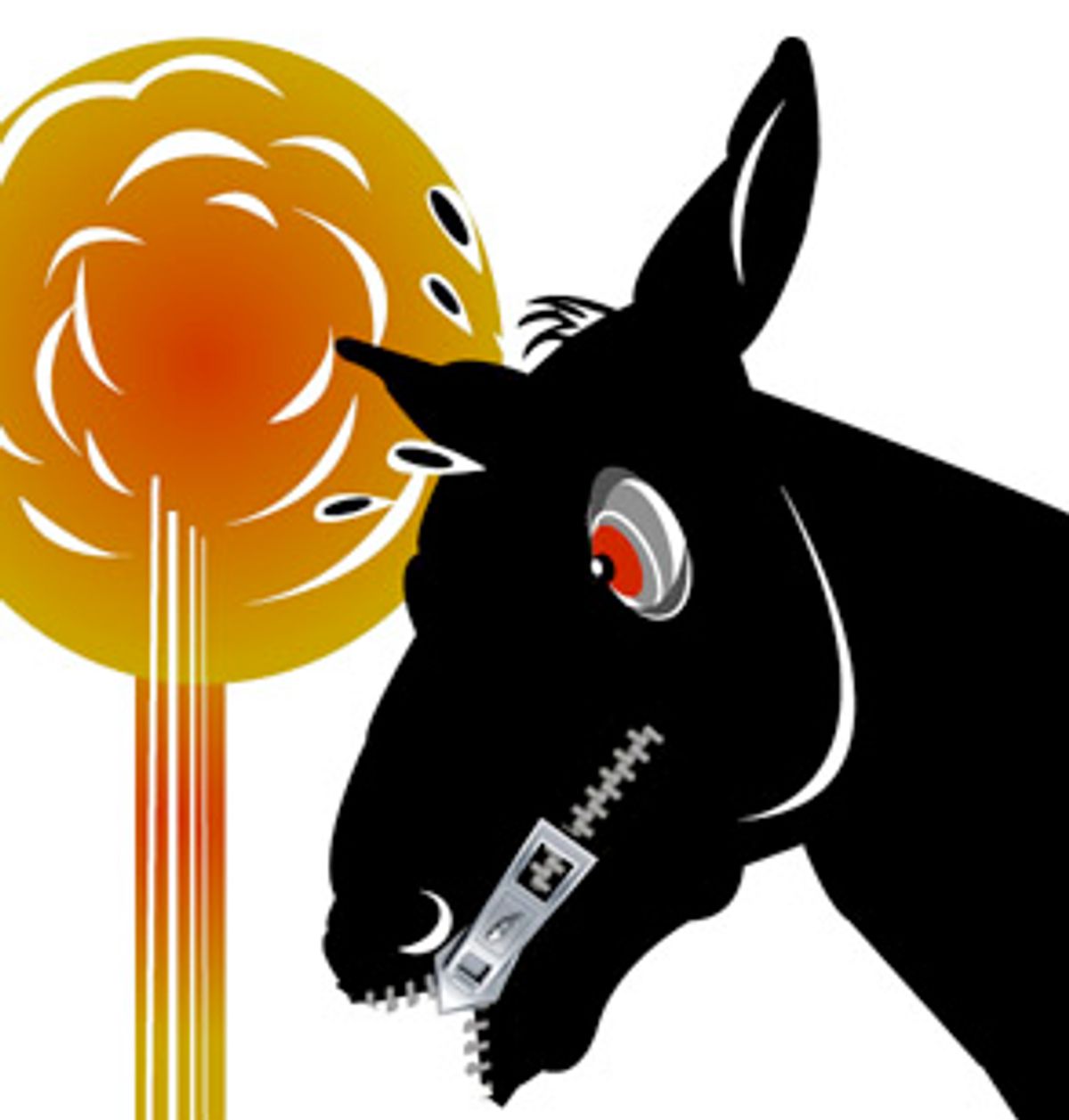 Democrats have a brand-new dilemma over the looming Iraq invasion: What should they say -- especially the half-dozen or so camped out in Iowa right now, crusading for the '04 presidential nomination -- once war breaks out?

Even some antiwar Democrats are insisting they won't criticize the Bush administration once the fighting begins. Massachusetts Sen. John Kerry, who's staked out a complex pro-disarming Saddam, anti-unilateral-war approach to the mess, says he'll hit the mute button immediately. Former Vermont Gov. Howard Dean, a more unequivocal war opponent than Kerry, told the Boston Globe he's not sure he'll keep it up once the shooting starts. War critics like former Sen. Gary Hart and Florida Sen. Bob Graham may postpone official announcements of their candidacies if war begins, as expected, in the next couple of weeks. Only Rep. Dennis Kucinich and former Sen. Carol Mosely-Braun, who are not given much chance of winning the nomination, have had the courage to tell reporters that they'll stick with their antiwar message come war.

This timidity is Reason No. 392 for the political question vexing Democrats right now: Why is it that polls show President Bush losing the '04 election to an "Unnamed Democrat," but beating all the Democrats who are currently in the race? Everyone knows this president is supremely vulnerable. He's plundered the surplus and pushed an economic policy that has arguably worsened the recession. He's angered most of our allies and is now on the verge of a potentially disastrous war whose rationale changes every day. His poll numbers dip almost daily, too.

But Bush can still probably beat any of the Democrats lined up against him, because no one yet has shown the charisma or the courage to break out of the pack. And otherwise admirable candidates like Kerry and Dean seem to be faltering in this early test of political integrity.

There's no denying the war presents a tough political riddle for Democrats. Every freshman pundit knows that Republicans are perceived as the national security party, so the nation's worries about war could very well help the president. That's widely used as the excuse for why the Democrats were creamed in the '02 midterm election last November. But in fact, the Democrats' worst political problem is the perception that they don't stand for anything, and their waffling on an antiwar message only confirms that. As a wag commented, there was more heated debate about the war in the Turkish parliament than in the U.S. Congress.

Kerry's waffling is at once more understandable, and more outrageous. The decorated Navy officer turned Vietnam Veterans Against the War leader knows one of his most valuable political assets is his stature as a guy who went to combat, running against a guy who dodged it. (Bush, you'll recall, served -- sporadically -- in the "Champagne Unit" of the Texas Air National Guard, named because it attracted other rich kids trying to duck the Vietnam War.) So Kerry explains his decision to stay mum once war begins as a gesture of solidarity with America's fighting men and women.

"It's what you owe the troops," Kerry said in a prepared news statement. "I remember being one of those guys and reading news reports from home. If America is at war, I won't speak a word without measuring how it'll sound to the guys doing the fighting when they're listening to their radios in the desert." If only Kerry remembered how he felt once he got home from Vietnam, when his worst fears were confirmed that the war was a huge mistake. (It would also be nice if he remembered there are gals, not just guys, on the front lines today.) He seems to have forgotten the question he is most famous for, the one he asked a U.S. Senate committee in 1971, demanding they shut the Vietnam War down immediately: "How do you ask a man to be the last man to die for a mistake?"

The veteran Kerry knows better than most politicians how crucial it is, for our troops maybe more than for the rest of us, that we never put American lives on the line for the wrong reasons; that we only fight wars that are absolutely unavoidable. That's what we owe the troops. Here's how he put it to rapt Iowa Democrats in January (as captured by Harold Meyerson in the American Prospect): "The United States of America should never go to war because it wants to go to war; it should only go to war because it has to go to war."

As Kerry well knows, clearly this is a war Bush wants to fight, not one we have to fight -- at least not immediately -- and we're marching ahead now for reasons the president has only incoherently explained to the rest of the world. If the war is wrong today, it will be wrong the day fighting starts, it will be wrong the next day, and it will be wrong every day we're at war after that. If Democrats censor themselves once war begins, when will their silence be broken?

Not just Kerry but the whole pack of '04 candidates seems overmatched by the current global crisis. In a disturbing Adam Nagourney piece in Monday's New York Times, dithering Democrats were featured complaining that in Iowa, nobody wants to listen to their speeches about women's issues or unemployment or the healthcare crisis; they only want to talk about war! Even Dean, who's benefited most from the surge of antiwar feeling in Iowa, whined to Nagourney: "I had a press conference and it was all about the war. And finally I said, 'Would anybody like to talk about the enormous jump in the unemployment rate that was announced in the morning papers?'"

For campaign staff, it's a scheduling headache, not a moral crisis: "Can somebody tell me what day it's going to start?" asked Sen. Joe Lieberman staffer Craig Smith. "You know it's out there, and you know it's looming, and it's like, 10 days from now, should we schedule a big, boisterous rally? I'm not sure that's a smart thing to do." Another one complained to the Boston Globe: "We may have to write a second speech" for this weekend's California Democratic convention, in case war breaks out unexpectedly.

Some reporters have taken to covering Iowans' obsession with the war as one of those eccentricities the primary system subjects us to every four years, like the overweening influence of the right-wing Manchester Union Leader in New Hampshire, or the candidates' justifiably ridiculed obsession with ethanol in the 2000 Iowa contest. Last week I watched a Des Moines Register columnist on CNN explaining his fellow Iowans' worries about war as though he was describing the offbeat cultural beliefs and habits of an exotic, isolated tribe that happens to sit on suddenly valuable land.

In fact, Iowans are very much in the American mainstream, and they're way ahead of the Democratic pack. They know that sadly, war matters most right now, and Democrats who complain about it don't deserve to win Iowa, let alone the presidency. What the befuddlement about war shows is that even the best of the current crop are campaigning to be managers, not leaders; they're at home with the business of fundraising and event-scheduling and policy briefings; they seem at a loss to respond to the ever-changing, life-and-death circumstances of a world on the verge of war.

Certainly the war will change the political landscape. If war breaks out, it may well be right to suspend campaign events and postpone "big, boisterous rallies" for a time, and congresspeople running for office may need to spend more time in Washington than Des Moines. Naked partisan posturing should be avoided. And candidates are correct to think about the tone of their remarks, to make sure nothing they say disparages the courage or integrity of those doing the fighting. They may suffer politically, for a while, whatever they do, because it's true that the nation rallies around its president in a time of war.

But they'll suffer more permanent political damage if they look like they're backsliding on their antiwar views. Democrats have to remember this is a mess that's at least partly of their own making. They've been treating Iraq like a tough campaign curveball, rather than a test of leadership and conscience, since before the midterm election. Democratic Leadership Council chair Sen. Evan Bayh of Indiana typified the party's cowardice when he told reporters last year: "The majority of the American people tend to trust the Republican Party more on issues involving national security and defense than they do the Democratic Party. We need to work to improve our image on that score by taking a more aggressive posture with regard to Iraq, empowering the president."

Democrats mostly followed Bayh's bad advice, caving on the vote that essentially gave the president a blank check back in October, to polish their "image" and put the issue behind them -- so they could get back to talking about Social Security reform on the campaign trail. But voters didn't listen. "I hope the party learned a lesson in November 2002 about the perils of going into a fetal position," David Wade, a spokesman for Massachusetts Sen. John Kerry, told ABC News just a few days before his boss issued his statement about not criticizing Bush once war begins.

Wade was right. And in his statement to the media this week, Kerry agreed with his spokesman, sort of. "I rejected the decision by some Democrats to surrender foreign policy issues to the Republican Party. I thought it was shameful." He insists "there will be an appropriate time to talk about the failures of diplomacy of the last months," but he doesn't say when that might be.

Kerry should remember: The Democrats' efforts to dodge the war politically didn't work last November -- and they paid with their political lives. The nation will pay for their timidity with real lives once the war starts. I hope Kerry reconsiders his pledge to censor himself, and commits to voicing his concerns about the war even if war breaks out. It's what he owes the troops.